People’s Budget of Chicago Seeks to Educate, Get Community Input on City Budget 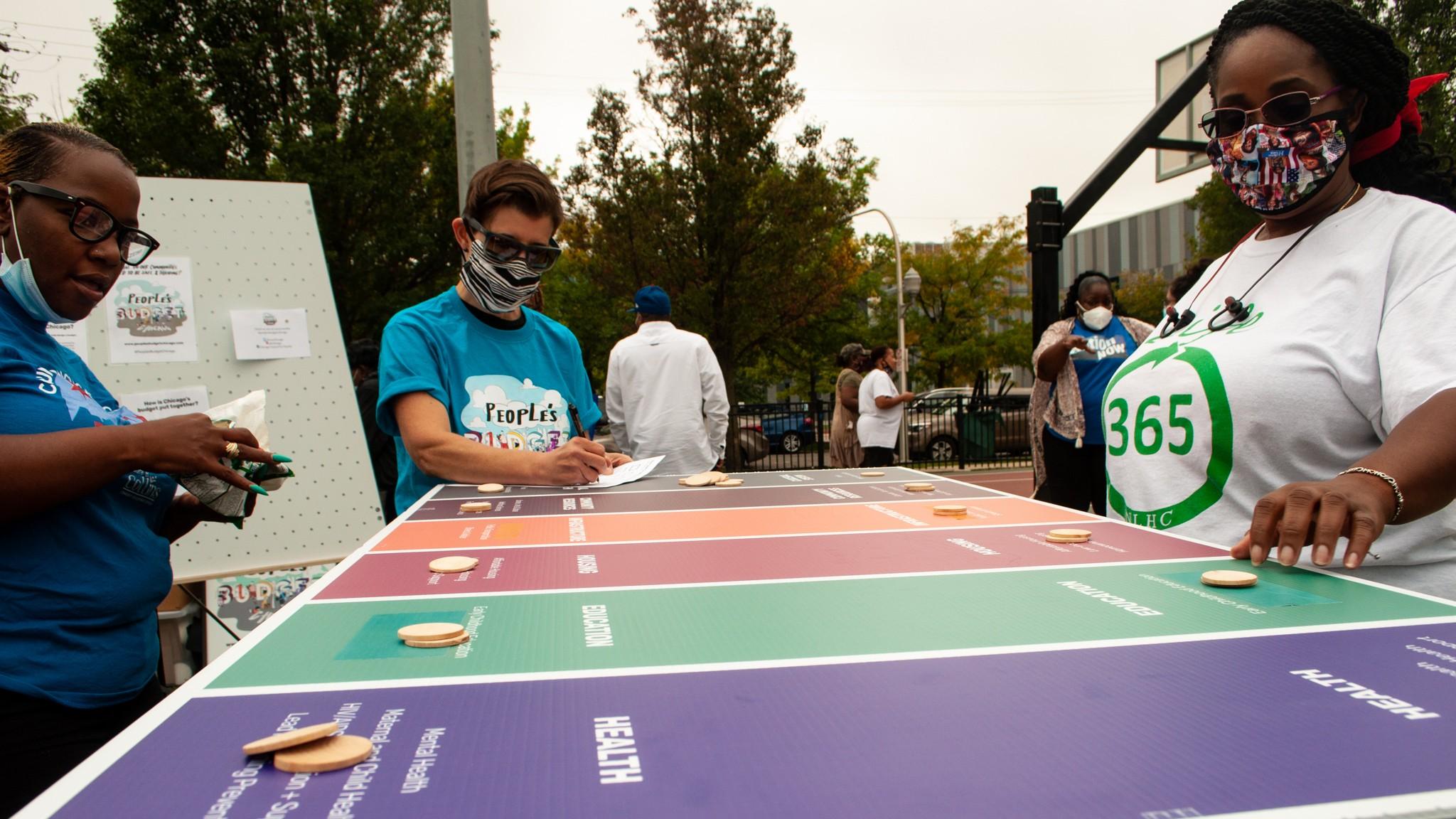 Saturday afternoon at Moore Park in Austin, community members gathered to distribute food, complete the 2020 census and learn about the City of Chicago’s budget.

Each year, city officials define a budget for Chicago. While the city budget process includes public hearings, Saturday’s event sought to get community input on their budget priorities.

The event, sponsored by the Black Men Project in collaboration with local churches (which provided food and census information), featured a presentation of the People’s Budget Chicago by Chicago United for Equity (CUE).

Through collaborations with community-based organizations, CUE asks residents how they think city money should be spent, focusing on city neighborhoods that have faced the most financial disinvestment to develop a budget.

“People’s Budget Chicago is a budget built for us, by us,” said CUE Executive Director Niketa Brar.

The People’s Budget asks one primary question: What do our communities need to be safe and thriving?

Community members answer that question directly by writing it on a dry erase board and by participating in a group discussion process dubbed, “The Budget Game.”

How the game works. Five community members decide how a $100 budget will be spent, with each participant spending $20 how they see fit on six budget priorities: health, education, housing, infrastructure, community resources and carceral systems (police).

Here’s how the Austin community budget broke down once all of the participants placed their tokens on a colorful board with the six budget priorities, $17 for health, $22 for education, $17 on housing, $14 on infrastructure, $15 on community resources and $15 on carceral systems.

The Austin residents’ allocations presented a stark contrast with that of the current city budget. Presented as a simplified budget, the city spends $4 on health, $10 on education, $4 on housing, $23 on infrastructure, $24 on community resources and $36 on carceral systems.

The game is a learning tool. “They’re actually learning how the city’s budget (is) divided into those six categories and how far apart was how much you invested from what your alderman invested in,” Brar said.

Community members were shocked by the differences in their priorities and those of elected officials.

One community member, Taihitia Shelby, said she was appalled to see exactly where her money was going. She also questioned whether the funding was actually going where it was supposed to.

“Even though on a piece of paper you’re seeing that it’s going there but in actuality, in my mind, it makes me think, ‘Is it actually going there?’” said Shelby.

While there were multiple differences between the two budgets, the most glaring was the amount of money spent on carceral systems, which in the city budget was more than double what Austin residents allocated.

“I think if you provided more things that others need, you probably wouldn’t have to provide so much in the police system,” said Shelby. “Because now people can afford housing. … They have somewhere to stay now. With health, the same way, they’re able to take care of themselves, some people that are just out hanging that police pick up, it’s because they have nowhere to go.”

She says funding other budget priorities will likely spark “a change in your community.”

“This is our money,” said Brar who helped community members figure out who their alderman was if they didn’t already know.

Community members then wrote their aldermen postcards, which were to be hand delivered to their offices.

“It’s being able to get the community more involved so we can have a say in where we should put our money to and if it doesn’t happen that way, we just gotta keep putting our foot down until we get exactly what we want,” said Shelby. “People have to fight sometimes.”

The Austin event was part of the People’s Budget Bus Tour, which has stopped in Englewood, Bronzeville and Humboldt Park, and will be making stops in Roseland, South Lawndale and Little Village, Uptown, Englewood, Uptown and Altgeldt Gardens in the coming days.