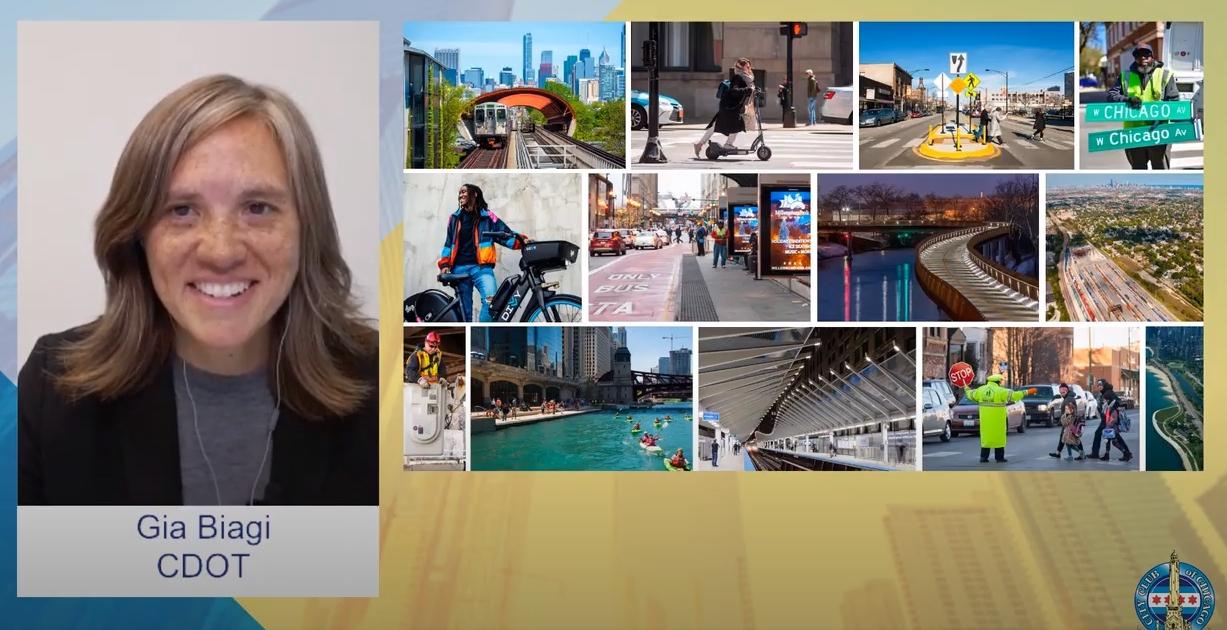 Chicago’s streets can have an impact on much more than the way we get from one place to another. That was the message from Chicago Department of Transportation Commissioner Gia Biagi in a speech to the City Club on Wednesday.

Biagi, who’s spoken frequently since taking over CDOT in January about the need for prioritizing equity and community input, showed a map of the vastly imbalanced concentration of wealth in Chicago during her speech.

“This map is fundamentally a construct of policy choices stitched into our built environment,” Biagi said.

Among the improvements to the built environment Biagi discussed: the city’s ongoing Vision Zero program, a plan to get to eliminate traffic fatalities in Chicago by 2026. She pledged money for Vision Zero efforts in CDOT’s 2021 capital program, but said safety goes beyond ending crashes.

“We need to get to zero on all forms of violence on our streets,” Biagi said. “We cannot be working in communities with our head down imagining the only challenge folks are facing are traffic crashes.”

Things like streetscaping efforts along commercial corridors can help “make a street lively and inviting, places where people want to be, places where people want to shop … you help lift up those local businesses,” Biagi said. “When people gather they create … relationships with their neighbors that are the kind that build trust, the kind that make for community solidarity in a crisis, and that becomes a network that enables people to respond.”

Biagi also highlighted coronavirus-era efforts that help people get around while maintaining social distancing, citing 10 miles of “shared streets” around the city that prioritize pedestrians and bicyclists over cars, and the “Make Way for Dining” program that Biagi said is letting some 300 restaurants serve diners in streets, curb lanes, and parkways.

“We’ve had a lot of inquiries from both communities in our shared streets program as well as people who are enjoying (the dining) experience to say, what does this look like for the long term? Can we keep this? What would this look like if we thought bigger about it? How can we take what we’re experimenting now with and make it real for the long term?” Biagi said.

The commissioner also flagged the need to improve the gaps in Chicago’s transportation network, and to ensure that ways of getting around other than driving are viable and attractive.

“With the challenge of social distancing … we’re certainly concerned about a ‘carpocalypse,’” Biagi said. Preventing that means things like improving the network of bus priority lanes, expanding Divvy citywide – and, “love them or hate them,” the rentable e-scooters that just rolled out as part of a second pilot program.

“Remember: it’s not about the scooter. It’s about creating more options for people to move around the city,” Biagi said. “Give the scooters a try. Help us make a good decision about what to do with this kind of sustainable micromobility in the long term.”

Biagi also talked about some specific projects including the Riverwalk, saying that the department is “getting ready” to put a call out for proposals to “help develop a framework for that next set of miles as we head from downtown and toward Ping Tom Park around 18th Street.”

And in response to a question about from a Lakeview resident and former CDOT employee resistant to the idea of adding a dedicated or partially dedicated bus lane as part of a long-awaited revamp of North Lake Shore Drive, Biagi wouldn’t back any specific proposals, saying: “We need to commit to public transportation and supporting it, but that doesn’t mean sacrificing the experience of North Lake Shore Drive, or in any of our neighborhoods.”