Q&A: What’s Happening at the US Postal Service, and Why? 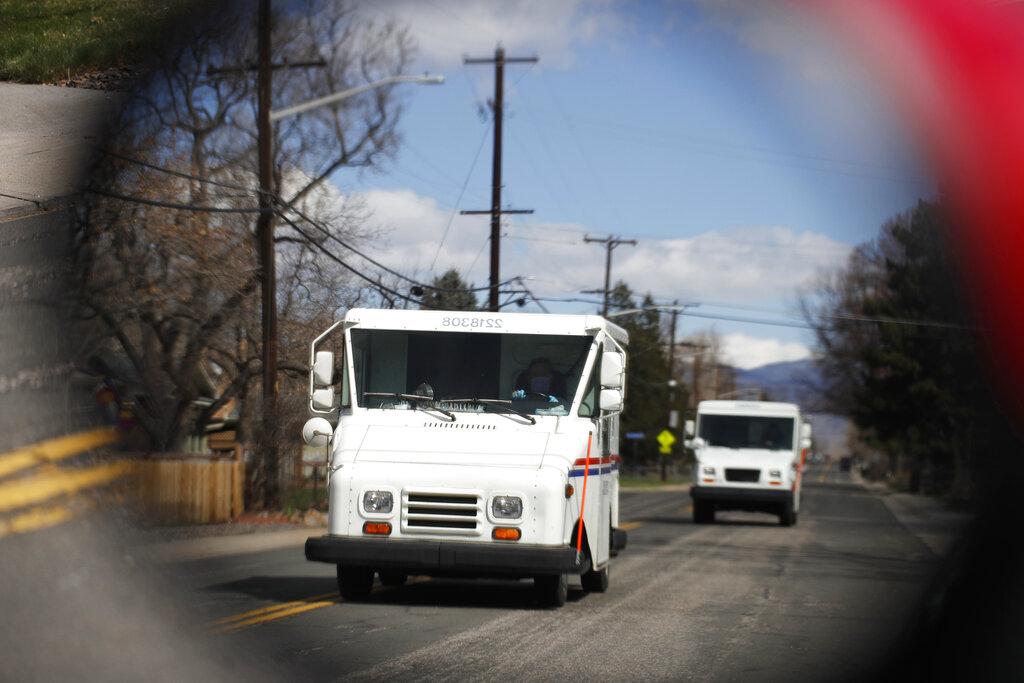 In this March 31, 2020, file photo United States Post Office delivery trucks are reflected in the side mirror of a vehicle as postal delivers set off on their daily rounds in Arvada, Colo. (AP Photo / David Zalubowski, File)

The U.S. Postal Service is warning states it cannot guarantee that all ballots cast by mail for the Nov. 3 election will arrive in time to be counted, even if ballots are mailed by state deadlines. That’s raising the possibility that millions of voters could be disenfranchised.

It’s the latest chaotic and confusing development involving the agency, which has found itself in the middle of a high-stakes election year debate over who gets to vote in America, and how. Those questions are particularly potent in the middle of the coronavirus pandemic, which has led many Americans to consider voting by mail instead of heading to in-person polling places.

The Centers for Disease Control and Prevention recommends mail ballots as a way to vote without risking exposure to the virus at the polls. But President Donald Trump has baselessly excoriated mail ballots as fraudulent, worried that an increase could cost him the election. Democrats have been more likely than Republicans to vote by mail in primary contests held so far this year.

Some questions and answers about what’s going on with the post office and the upcoming election:

The Post Office has lost money for years, though advocates note it’s a government service rather than a profit-maximizing business.

In June, Louis DeJoy, a Republican donor and logistics company executive, took over as the new postmaster general and Trump tasked him with trying to make the Postal Service more profitable. Doing so would also squeeze businesses such as Amazon. Its chief executive, Jeff Bezos, has come under criticism from Trump because of the coverage the president has received from The Washington Post, which Bezos owns.

DeJoy cut overtime, late delivery trips and other expenses that ensure mail arrives at its destination on time. The result has been a national slowdown of mail.

The Postal Service is hoping for a $10 billion infusion from Congress to continue operating, but talks between Democrats and Republicans over a broad pandemic relief package that could have included that money have broken down. On Thursday, Trump frankly acknowledged that he’s starving the postal service of that money to make it harder to process an expected surge of mail-in ballots.

WHY DOES THIS MATTER IN AN ELECTION YEAR?

Mail-in ballots have exploded in popularity since the pandemic spread in mid-March, at the peak of primary season. Some states have seen the demand for mail voting increase fivefold or more during the primaries. Election officials are bracing for the possibility that half of all voters — or even more — will cast ballots by mail in November.

Late last month, Thomas J. Marshall, the post office’s general counsel and executive vice president, sent states a letter warning that many of them have deadlines too tight to meet in this new world of slower mail.

Pennsylvania, for example, allows voters to request a mail ballot by Oct. 27. Marshall warned that voters there should put already completed ballots in the mail by that date to ensure they arrive by Nov. 3.

This has been a potential problem since the Obama administration, when the post office relaxed standards for when mail had to arrive. But it’s particularly acute when the volume of mail ballots is expected to explode in states such as Pennsylvania, which only approved an expansion of mail voting late last year. It’s also acute when the president has said openly he wants to limit votes by his rivals by keeping them from voting by mail.

It’s unclear. The first question is whether there will be a coronavirus relief bill that could help fund the post office. Republicans and Democrats are far apart on the measure and Congress has gone home for a few weeks.

If there’s no resolution of the coronavirus aid, the matter is sure to come up during negotiations in September to continue to fund the federal government. The government will shut down if Trump doesn’t sign a funding bill by Sept. 30.

States can also act to change their mail balloting deadlines. That’s what Pennsylvania did this past week, with the state asking a court to move the deadline for receiving mail ballots back to three days after the Nov. 3 vote, provided the ballots were placed in the mail before polls close on Election Day.

Massachusetts Sen. Elizabeth Warren and some other Democratic lawmakers are also seeking a review of DeJoy’s policy changes. In response to the letter, spokeswoman Agapi Doulaveris of the U.S. Postal Service Office of Inspector General said the office is “conducting a body of work to address the concerns raised.” She declined to elaborate.