Health Care Workers Hit the Streets to Volunteer Their Time, Care During Protests 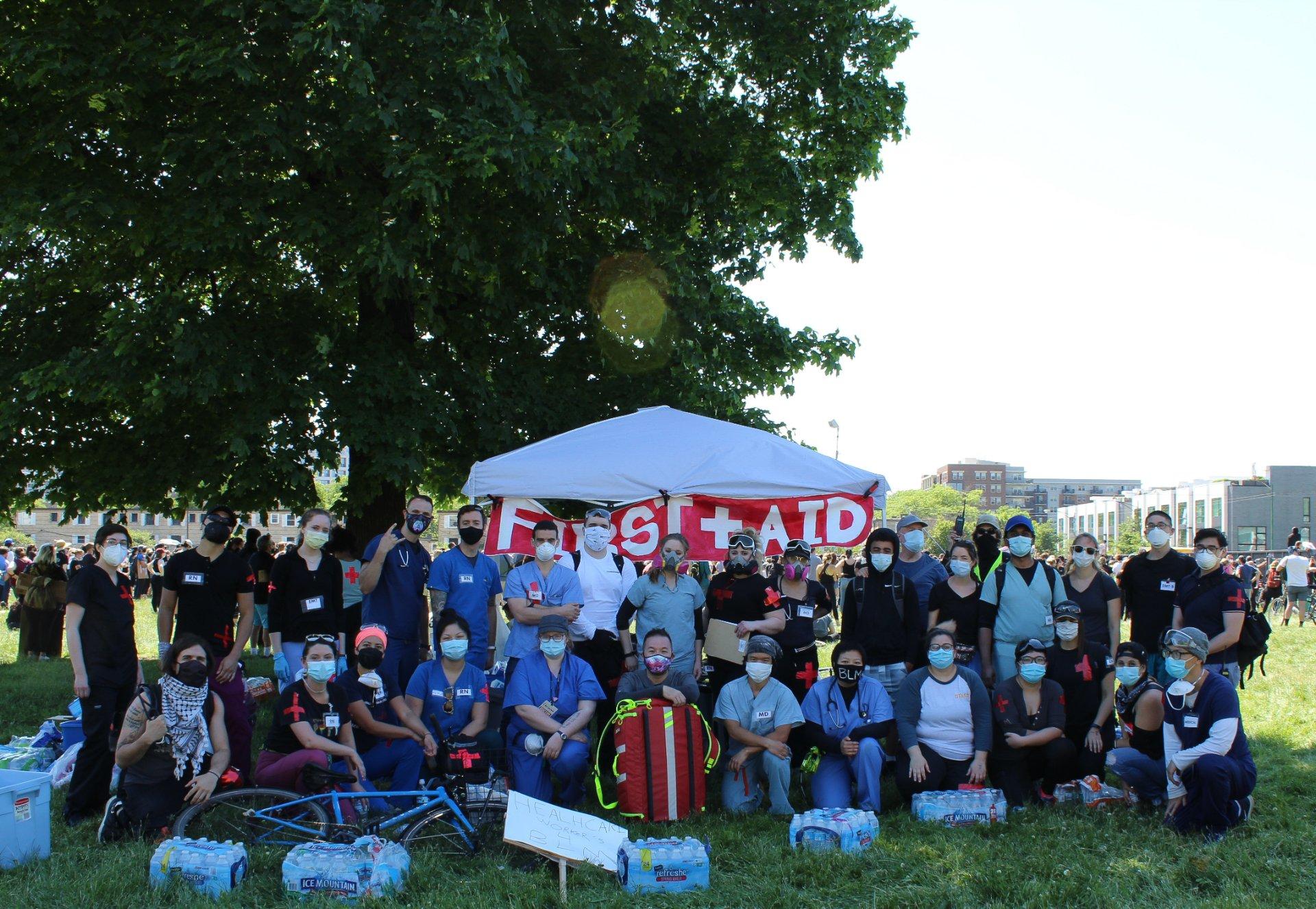 As protests and rallies against racism and police brutality erupted in the wake of George Floyd’s death at the hands of Minneapolis police, two friends working as emergency medicine physicians in different parts of the U.S. wanted to show their support for the movement.

“With the entire Black Lives Matter movement starting, being a person of color — that was something that really impacted me,” said Dr. Dakota Lane, an emergency medicine physician who lives in Gainesville, Florida. “I really wanted to get involved in any way I could.”

In Chicago, Lane’s friend Dr. Mitchell Li learned of an opportunity to volunteer his expertise as an emergency medicine physician to treat protesters. He asked Lane to join him.

“When I heard about the protests occurring and this movement of protest medicine that was starting, it just seemed like such an amazing chance to actually use my medical skills to be involved in something bigger than myself,” said Lane, who flew to Chicago in early June to join Li and others volunteering as street medics.

The volunteers embedded themselves among protesters, setting up and staffing medical tents.

“We were prepared to treat potentially anything – tear gas, pepper spray or violence of some sort,” said Lane. “We mostly treated people who were dehydrated from being out in the heat, lightheadedness, minor cuts, scrapes and things like that.”

Lane and Li were present when, at a June 6 protest in Union Pak that attracted more than 30,000 people, a woman fell and broke her arm. Volunteers provided initial care and brought her to a hospital for further treatment.

“My personal vision for the future is to continue to support protesters in expressing their First Amendment right and giving them a safe space to do that and addressing health disparities in a larger fashion, which have been ongoing (and) include COVID-19,” Li said.

To do that, Li, Lane and others have launched the Chicago Street Medic Alliance to grow support for and awareness of their mission.

The grassroots organization includes medical professionals like Lane and Li, plus community organizers and activists. CSMA’s mission is to “ensure that everyone can safely exercise their First Amendment rights in the face of state-sanctioned or violent opposition.”

CSMA’s top priority is to ensure the “safety and wellbeing of protesters, organizers, rally-goers and political action-takers,” according to the group’s website. “Protesters are safer and can be more successful when they have reliable medical support behind them. We welcome and celebrate those activists seeking positive change,” the group states. “We approach our work with a compassion and pragmatic optimism that we hope can uplift the voices and the mission of those we support.”

CSMA has been active in several protests since the Union Park event, including a protest last month in Grant Park near the Christopher Columbus statue that turned violent. According to the group’s Facebook page, they treated 209 pepper-spray injuries, 54 head injuries and 39 lacerations during the July 17 protest in Grant Park.

Lane says the role of street medics will become a fixture in communities “because I don’t think these protests are going to go away anytime soon.”

For more information about the Chicago Street Medic Alliance, including how to get involved, visit its website.