NEW YORK (AP) — President Donald Trump has ordered sweeping but vague ban on dealings with the Chinese owners of popular apps TikTok and WeChat, saying they are a threat to U.S. national security, foreign policy and the economy.

But it’s far from clear what the administration intends to actually do when the bans take effect in 40 days, since the orders are currently blank checks waiting to be filled in. Uncertainty also surrounds what effect the orders will have on the apps’ users, whether the administration will face legal challenges over its authority to ban consumer apps, and what the companies — or China — will do next. Microsoft is in talks to buy parts of TikTok, in a potential sale that’s being forced under Trump’s threat of a ban.

Q: WHAT ARE THESE COMPANIES?

A: TikTok, owned by ByteDance, is an increasingly popular video app with 100 million U.S. users and hundreds of millions globally. It has a fun, goofy reputation, full of people lip-syncing, dancing and pulling pranks, and is exceptionally easy to use. Like other social-media companies, it has raised concerns about the privacy of its users and how it moderates content. It has spawned an influencer culture of its own and nurtured music hits; Facebook and Snapchat see it as a competitive threat.

Tencent’s WeChat is a critical communications and payments service in China and with Chinese emigrants abroad, with 1.2 billion users globally. It doesn’t break out U.S. users, but mobile research firm Sensor Tower estimates 19 million downloads in the U.S. since 2014.

But Tencent is intertwined with other major U.S. entertainment brands. It owns Riot Games, publisher of hit video game League of Legends, and has a big stake in Epic Games, the company behind video game phenomenon Fortnite. It also has a streaming deal with the NBA.

Q: WHAT WOULD THE ORDERS DO?

A: The first thing they’ve done is to spread fear, uncertainty and doubt.

U.S. Secretary of State Mike Pompeo last week said that “we want to see untrusted Chinese apps removed from U.S. app stores.” The vague wording of the orders, which prohibit “any transaction” under U.S. jurisdiction with either Tencent or ByteDance, could be interpreted to support an app-store ban and other measures, experts said. It’s not clear how it would apply to Tencent’s other properties and partnerships.

Q: WHY IS THE TRUMP ADMINISTRATION CRACKING DOWN ON TIKTOK AND WECHAT?

It’s driven by concerns over collection of American users’ data and longstanding complaints about Chinese business tactics, according to two White House officials not authorized to speak publicly about private deliberations. Trump had long taken aim at TikTok but the move against WeChat was an escalation. 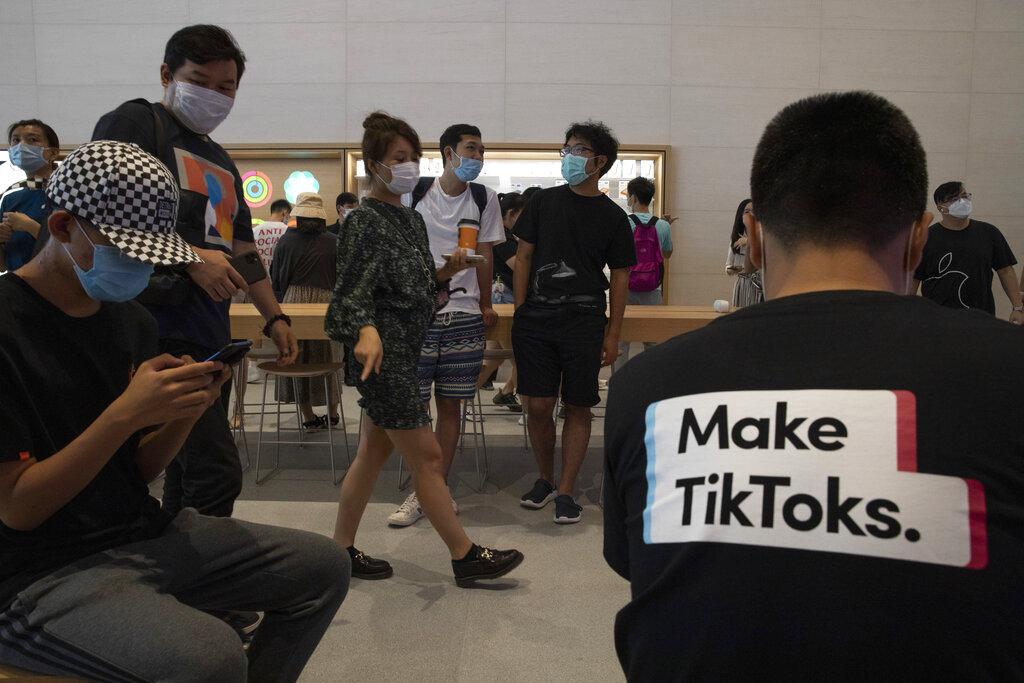 But the picture is more complicated than just that. Trump’s frustration over the coronavirus pandemic and China also drove his actions, the officials said. He has blamed the outbreak on Beijing and questioned whether China’s leaders purposefully failed to contain it to spread economic disaster to other nations. He also has privately raged against China, blaming the nation for hurting his re-election chances and expressing no desire for a further trade deal.

Trump ignored questions about the executive orders from reporters on the tarmac after deplaning in advance of a three-day weekend at his Bedminster club.

Q: ARE THE ORDERS LEGAL?

It would be difficult for the government to stop people from using WeChat and TikTok — there are workarounds even if they’re removed from app stores — and it’s not clear the president has a legal basis to do so under the powers cited in the orders, experts said. Moreover, civil-rights groups said a ban raises First Amendment concerns.

“Selectively banning entire platforms harms freedom of speech online and does nothing to resolve the broader problem of unjustified government surveillance, including by our own government,” said Hina Shamsi, director of the American Civil Liberties Union’s National Security Project, in an emailed statement.

TikTok says it will “pursue all remedies” and suggested it would sue to ensure the company and its users are “are treated fairly.”

Q: DO I NEED TO DELETE TIKTOK FROM MY KID’S PHONE?

A: Not as a result of the Trump administration’s actions, though you might want to take a closer look anyway.

TikTok, like most other social networks, collects data about its users and moderates what’s posted. It grabs people’s locations and messages they send one another, for example, and tracks what people watch in order to know what kinds of videos they like and how best to target ads to them. U.S.-based platforms do much the same thing, so deleting TikTok but leaving Snapchat, for instance, might not change things much.

But the administration and some scholars worry that China can force its companies to help the government gather intelligence. In the case of TikTok, this remains a hypothetical threat, said Samm Sacks, a researcher at Yale Law School’s Paul Tsai China Center — but she acknowledges that it could be happening.

TikTok says U.S. user data isn’t stored in China and that it wouldn’t hand it over. But experts believe said that if the Chinese government wants information, it will get it. The U.S. government has also cracked down on Chinese telecom companies Huawei and ZTE because of this worry. The companies deny that they facilitate spying.

There are also concerns about TikTok censoring videos critical of China, which TikTok denies, and pushing propaganda. Advocates in the U.S. also say the company is violating children’s privacy laws.

Q: IS THE ALLEGED CHINESE THREAD FROM TIKTOK AND WECHAT UNIQUE?

A: No. China’s economic espionage is a well-known constant, and the Chinese military or groups with ties to it are accused of massive hacks of sensitive information from the credit agency Equifax and the federal Office of Personnel Management.

But several experts say that the U.S. government is lashing out at Chinese tech companies without taking other significant steps to protect Americans’ privacy.

Meanwhile, the Trump administration has been embroiled in a tariff war with Beijing over its technology ambitions. And election-year politics in the U.S. may be raising the stakes. Trump appears to be using friction with China to drum up voter support.

Q: WHAT HAPPENS NEXT?

A: The U.S. government is effectively forcing ByteDance, TikTok’s owner, to sell so it can salvage the app in the U.S., a huge and valuable market. TikTok is in talks with Microsoft, which has said it intends to complete discussions by Sept. 15.

Q: DO U.S. TECH COMPANIES STAND TO BENEFIT FROM PRESSURE ON CHINESE APPS?

If Microsoft does end up buying some or all of TikTok, it would get a fast-growing app with younger users, a whole new consumer business. But some analysts are skeptical of what Microsoft can do with a product that’s so different from its core workplace business.

And there is speculation that Facebook could point to a Microsoft purchase of TikTok to say that there is more social-media competition in the U.S., relieving antitrust pressure on itself.