They’re rare now, but rooftop water tanks once stood sentinel atop every large building in the city, keeping them safe from threat of fire.

Geoffrey Baer is here to say thanks for those tanks.

On top of buildings around Chicago’s neighborhoods, I frequently see water tanks or water tank platforms where the water tank has been removed. What are they for and are they still in use?

We answered a similar question to this one back in 2012 but this is a good time to do an update. Back then, we described the tanks as a vanishing vestige of another era in Chicago, and sadly, they’re continuing to disappear from the skyline.

The purpose of these tanks was to provide a reliable, easily-accessed water supply to put out fires. The water in the tanks is fed to firefighters by gravity, so it’s almost a fail-safe supply for emergencies.

After the Great Fire of 1871, ordinances were passed requiring these tanks on top of warehouses, factories and public buildings. The law spawned a whole industry in water tank construction and maintenance. 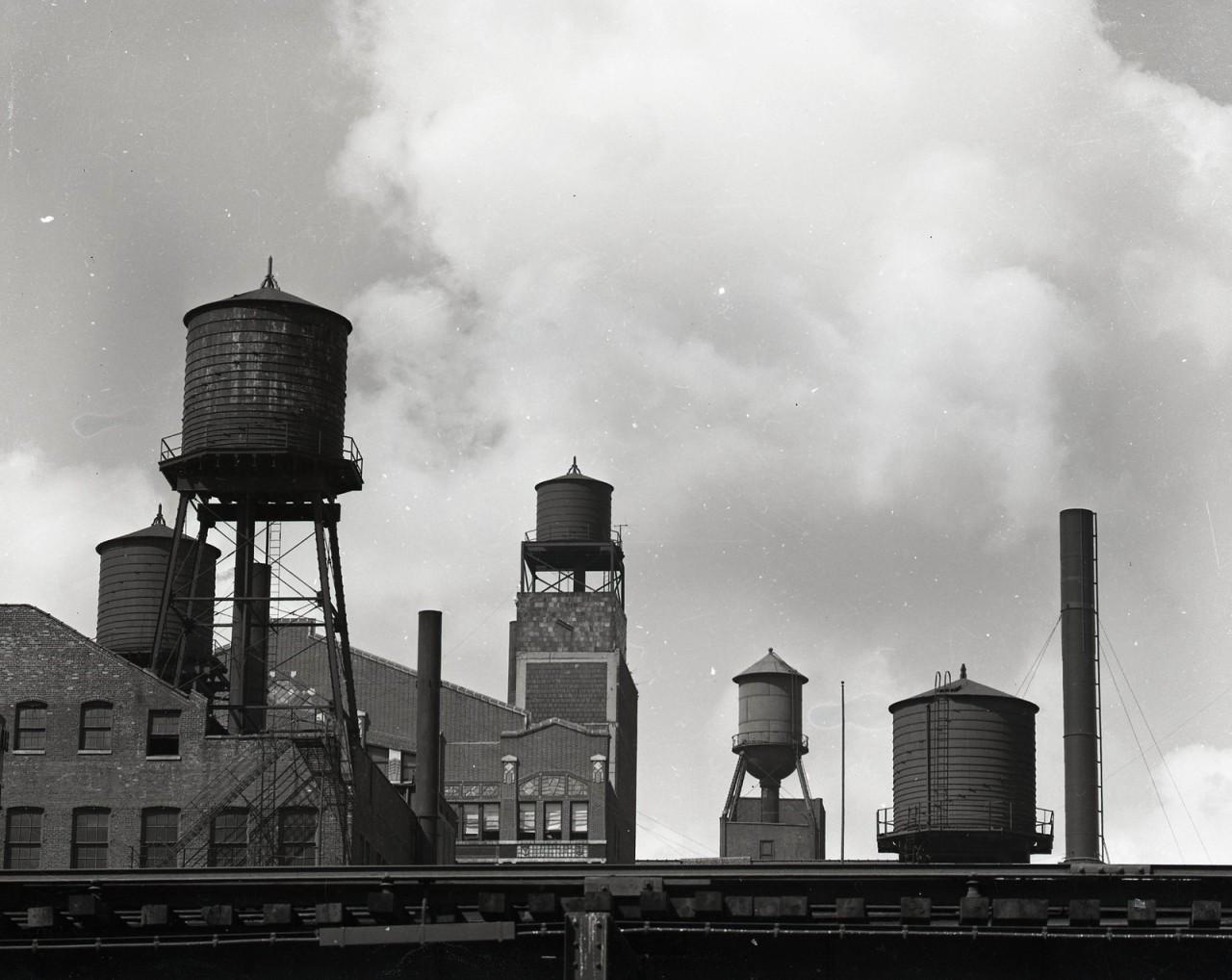 Many firms were owned by German and Swedish immigrants who were experts in high-quality wooden barrel-making. Boards chosen for tank construction had to be free of any knots and gnarls to prevent leaks. Redwood tanks could last 50 years, and cypress ones for a century.  Each company added its own signature flourishes to its tanks, such as ornamental caps on the cone-shaped barrel tops.

The average water tank is about 16-by-16 and holds about 20,000 gallons of water, but they can get a lot bigger. The Carbit Paints tank atop 927 W. Blackhawk holds about three times that.

At their peak, there were at least 1,300 of these tanks across the city, and maybe many more. Today, buildings have electric pumps on site to supply fire suppression systems so the water tanks have become obsolete.

Ward Miller, executive director of the organization Preservation Chicago, estimates that about 125 tanks remain in the city and about 90 are still in use. That’s down from 140 remaining tanks in 2012.

That organization and others have been sounding the alarm about the dwindling number of tanks in Chicago over the past 20 years or so.

In 2006, Richard M. Daley’s administration designated the tanks as historic structures and required building owners to explore options for preserving or reusing the tanks before demolishing them. 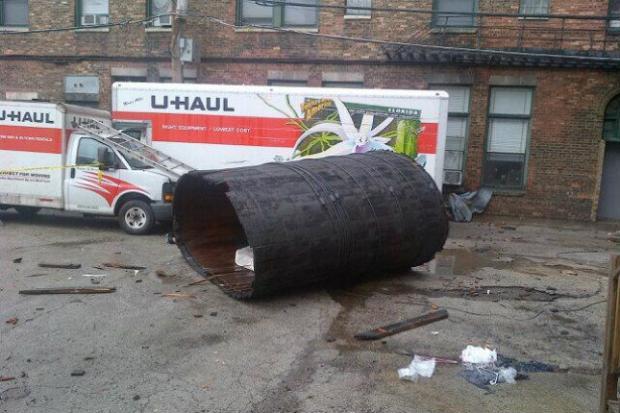 The historic water tank on roof of the landmark Brewster Building in Lincoln Park toppled over and fell eight stories to the ground injuring three people.(Chicago Fire Department)

The city has long required regular inspections of the tanks to ensure they’re in good repair, but a disaster in 2013 resulted in even stricter water tank laws. The historic water tank on roof of the landmark Brewster Building in Lincoln Park toppled over and fell eight stories to the ground injuring three people at least one of whom was knocked off her feet by tens of thousands of gallons of water.

Along with the tanks, the people who historically built and maintained them are disappearing too. The last surviving tank company in Chicago, Johnson and Carlson was founded in 1893. They bought out all their competitors by 1965 and made their last tank in the early 1970s. But as best we can tell, they are no longer in business, leaving general contractors and structural engineers to maintain the city’s remaining tanks.

Across the city, the cost of upkeep on water tanks has unfortunately led some building owners to demolish them instead of maintaining them, but some have become such iconic fixtures that their removal caused outcries from the community. 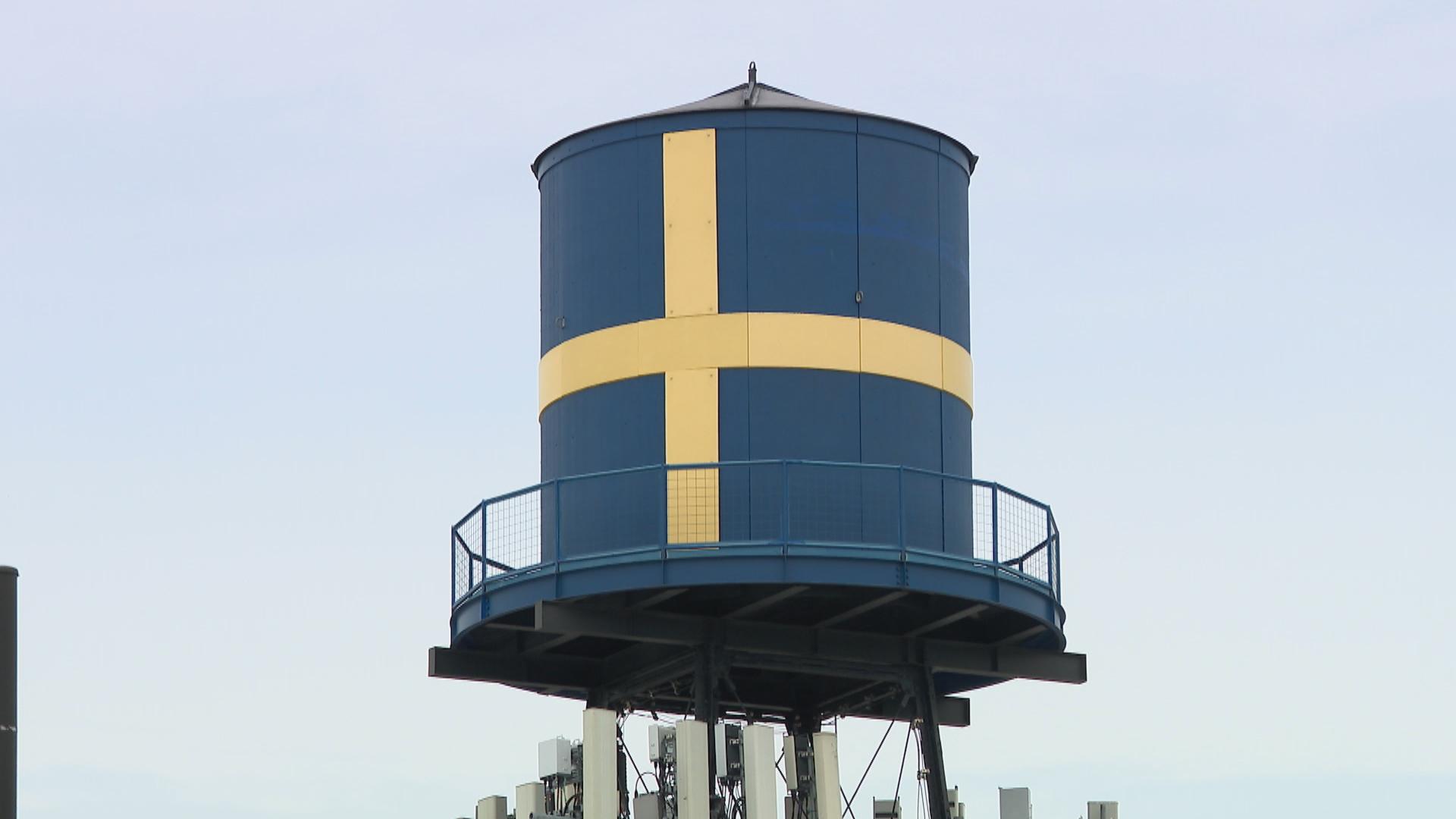 In 2014, a 1927 water tank painted to resemble the Swedish flag in the Andersonville neighborhood was torn down after it was damaged beyond repair during a brutal winter. The tank was such an icon in the neighborhood that it was replaced with this fiberglass and steel replica in 2017.

Another flag-emblazoned tank viewers might know is painted with the Chicago flag at Ashland and the Kennedy Expressway atop the former Bigsby & Kruthers warehouse.

And where they can’t be saved in place, reuse is sometimes an option for the tanks. A modern example of water tank reuse at Skinner Elementary School in the West Loop neighborhood by the architecture firm of SMNG-A.  A historic tank was restored and is used as a stormwater cistern to irrigate the school’s green roof. 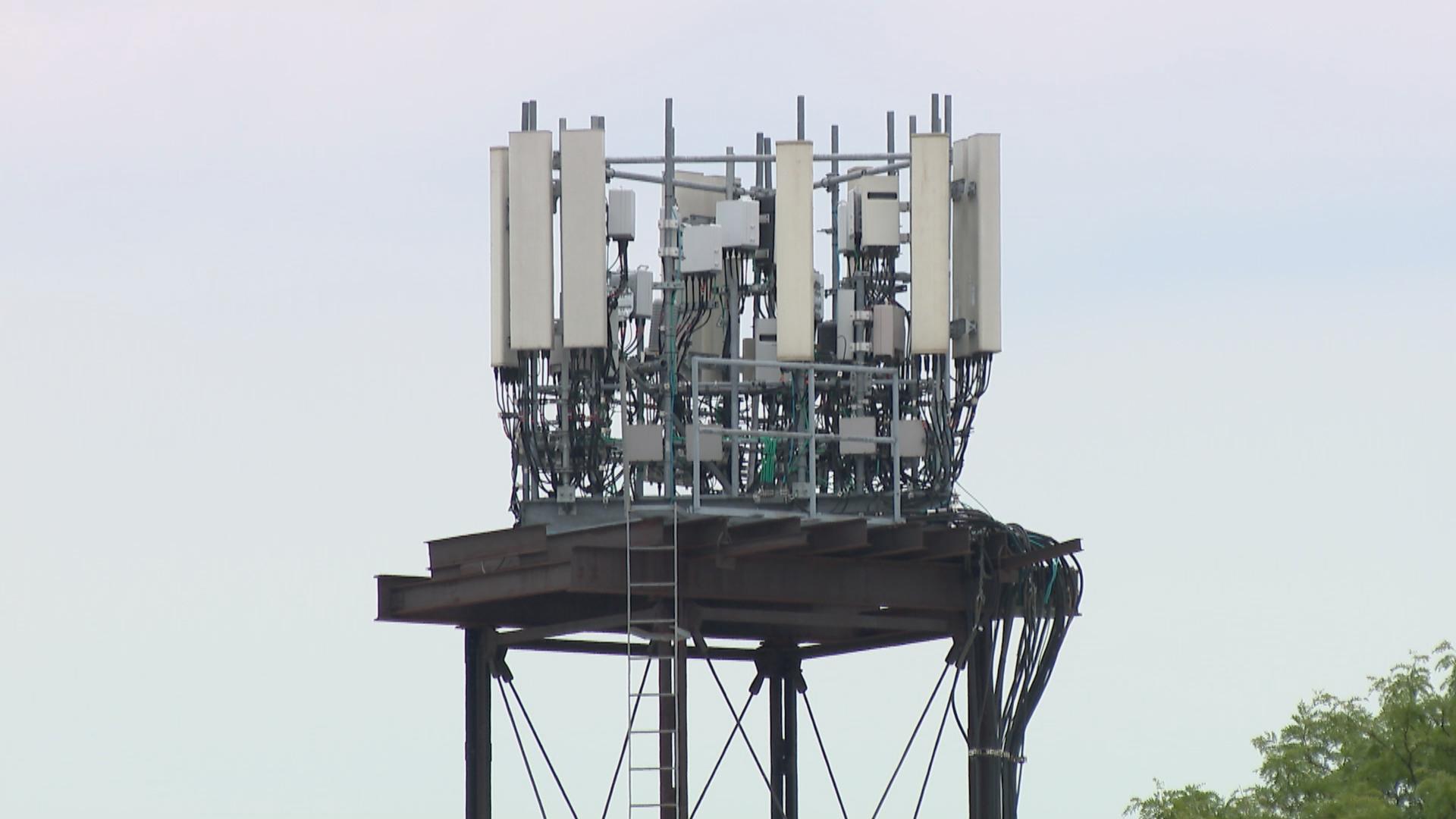 Even if the tank is gone, the platform can still be reused – in many neighborhoods, old water tank platforms bristle with cell phone antennas.

The ultimate reuse story actually concerns a metal water tank at Adams and LaSalle that survived the Chicago Fire. It was originally built for the municipal water supply, not for fire suppression. It was converted to Chicago’s first public library to house the 8,000 books sent as a gift from the people of England including one from Queen Victoria herself, to start a free library as Chicago recovered from the disaster.

The size of the tanks and their stations high above the city make them an irresistible canvas for branding, as is the case with the Salvation Army shield tank at 509 N. Union Ave and the Greek Islands tank at 200 S. Halsted. Longtime Brown Line riders might remember the tank above the former Eversharp pencil factory in Roscoe Village, which was painted to resemble a cup full of pencils. The tank remains, but it was painted black after the factory was converted into condos in 1990.

The tanks are similarly irresistible to artists, including a prolific muralist named Sachio Yamashita, whose work we profiled in 2018. One of his most visible projects in the 1970s was painting rooftop water tanks that dotted the city in gumdrop colors. His stated goal was 1,000 tanks, but he was only able to paint 13 in total.