Video gaming magnate Rick Heidner, who has been of interest to the FBI amid sprawling corruption probes that have wracked state and municipal politics, is not himself the target of an investigation, according to a letter from the U.S. Attorney's office that was obtained by WTTW News.

Heidner and his company Gold Rush Amusements, one of the state’s largest operators of video gaming consoles that dot the state, were listed in the search warrant executed during a raid of former state Sen. Martin Sandoval’s capitol office last fall as part of a bribery investigation.

The feds likewise sought records relating to Heidner and Gold Rush when they carried out searches days later in the villages of Lyons and McCook.

In a letter dated June 26, U.S. Attorney for the Northern District of Illinois John Lausch wrote: “In the context of a criminal investigation, a ‘target’ is a person who is linked by substantial evidence to the commission of a crime and who, in the prosecutor’s judgment, is likely to be charged.”

Lausch continues: “At this time, your client is not a target of this investigation.”

That may change, Lausch writes, and he makes explicit that the U.S. attorney “has made no other representations or promises.”

Heidner, through his public relations team, said that he and his company have been in a media spotlight since their names appeared in the 2019 search warrants, resulting in “inaccurate speculation about Mr. Heidner.”

“Mr. Heidner is confident that he and Gold Rush have acted properly and he will continue to take appropriate action to restore his reputation against the false and misleading narrative that has been advanced publicly since last year,” the statement said.

“You definitely breathe a lot easier when you see the words ‘non-target.’ You know that you might be safe,” said criminal defense attorney Gal Pissetzky, who does not represent Heidner.

Sandoval in January pleaded guilty to having taken cash from a representative of the Chicago-based red light company SafeSpeed, LLC, in exchange for protecting the company in Springfield through his role as Democrats’ Transportation Committee chairman in the state Senate.

Both SafeSpeed and Gold Rush were among the recipients of forgivable loans through the federal government’s Payroll Protection Program (PPP), meant to help businesses keep their workers employed during the coronavirus crisis, as were other video gaming and red light camera firms.

Bars and video gaming outposts had been forced to close from March through the beginning of July due to executive orders meant to prevent the spread of COVID-19, causing the once-burgeoning industry to take a financial hit.

SafeSpeed’s counsel, Chris Gair, said the company used the program for its intended purpose, and, thanks to the PPP loan, it was able to put 50 laid-off employees back to work.

“That is exactly what the program was designed for,” Gair said in a statement in response to questions from WTTW News. “The loan is not newsworthy. It appears that the only reason for you to report on it, which your email below alludes to, is the federal investigation. SafeSpeed did nothing wrong. No one has ever suggested that it did. Rather, it appears that a former employee of SafeSpeed was involved in illegal conduct. We immediately fired him when we found out.”

The PPP form did ask applicants whether they’ve been found guilty of felonies of have been subjects of indictments, but that isn’t the situation for Heidner, Gold Rush nor SafeSpeed.

Nor should it be, said the Better Government Association’s David Greising.

“If you believe in due process and the rule of law I don’t think you’d want to create a situation in which a person who is under scrutiny is not allowed to apply for and receive government support that the rest of us are eligible for,” Greising said.

Still, he said, it’s unfortunate whenever a company that appears to be walking a fine line of legal conduct benefits from a government program, potentially leaving out a good actor.

Greising said a potential option would be for the government to include clawback provisions so that if a loan applicant were convicted of criminal activity shortly after receiving taxpayer money it would have to agree to return the funding.

Madigan & Getzendanner, the law firm of Chairman of the Democratic Party of Illinois Michael Madigan, is also listed in federal PPP databases.

Madigan’s spokesman said the firm, which specializes in property tax appeals cases, withdrew its application and received no funds. 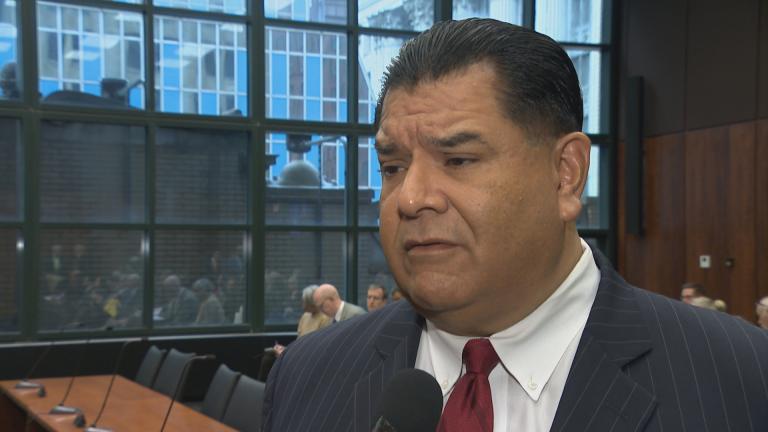