Stalled by Pandemic, Push to Create Elected Board to Oversee CPD Gets New Life Amid Protests 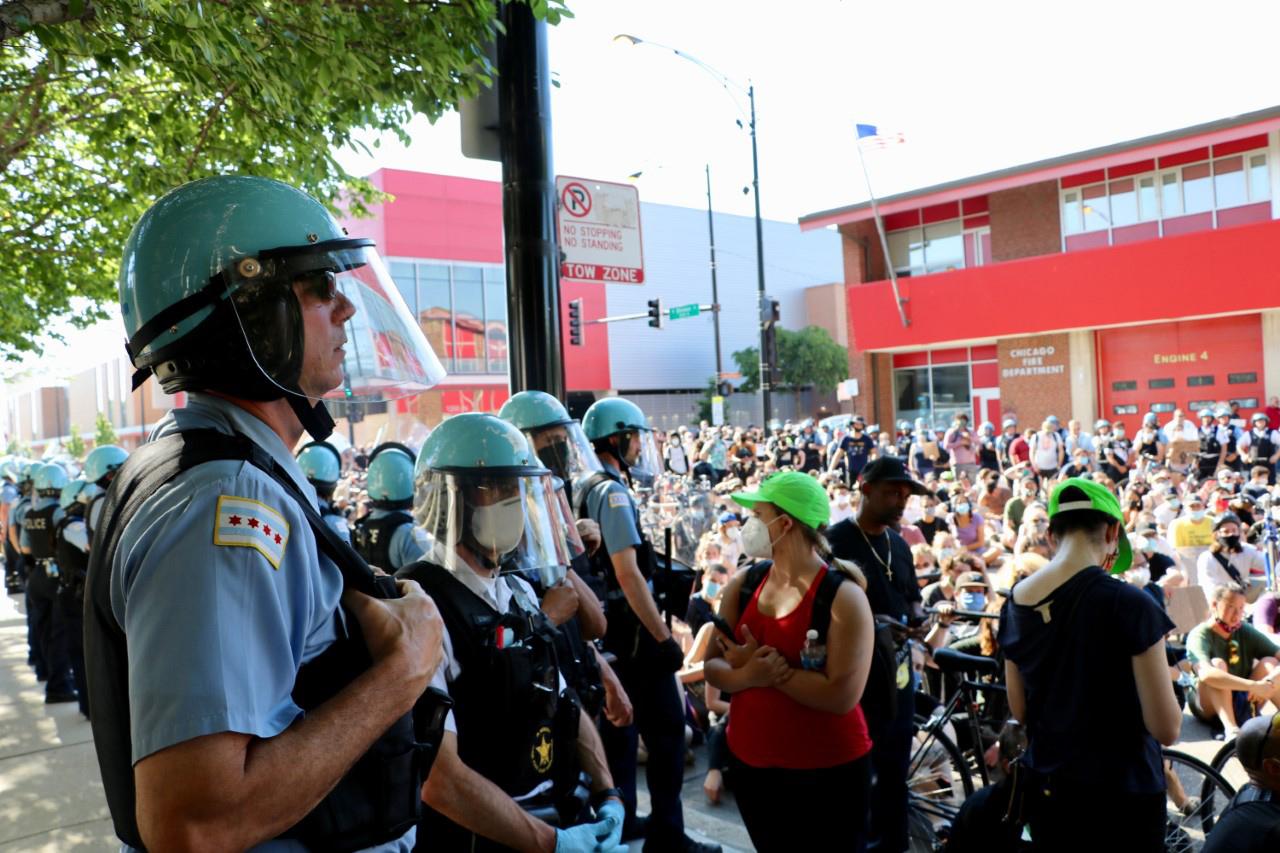 A line of Chicago police officers watch the demonstration at Division and Larrabee streets on June 2, 2020. Protesters assembled in front of a fire station and adjacent to the police department’s 18th District station. (Evan Garcia / WTTW News)

Efforts to put an elected board of Chicago residents in charge of the Chicago Police Department — stalled by the coronavirus pandemic — could get new life amid a renewed nationwide push to hold police officers accountable for misconduct.

However, Mayor Lori Lightfoot did not include that effort in her speech to the city Tuesday, vowing to deliver “fundamental change … that results in the respect, dignity and freedom that black people deserve in this country.”

Instead, Lightfoot said reforms based on improving police training, officer wellness and community relations are “critical to resolving our crisis” sparked by the death of George Floyd in the custody of Minneapolis Police. An officer has been charged with his murder.

That left Desmon Yancy, the coordinator of the Grassroots Alliance for Police Accountability, “surprised and disappointed” and concerned she would not use the weight of her office to turn the proposal into law.

Lightfoot campaigned for mayor on a promise to craft an oversight board for the police department in 2019.

“It bothers me,” Yancy said, adding that the need to increase police oversight should be clear to everyone after protests erupted all over the country. “It gives me pause.”

In 2016, Lightfoot led the Police Accountability Task Force formed by former Mayor Rahm Emanuel in the wake of the outcry caused by the 2014 murder of 17-year-old Laquan McDonald by a police officer. The task force’s first recommendation was to create a “Community Safety Oversight Board, allowing the community to have a powerful platform and role in the police oversight system.”

Lightfoot told reporters Wednesday that discussions about community oversight are ongoing when asked why she did not mention the push in her speech on Tuesday.

“That hard work is continuing,” Lightfoot said, adding that she is “committed” to resolving the “two or three” sticking points.

Several aldermen on Wednesday called for the city to respond to Floyd’s killing by passing community oversight, including the City Council’s Black Caucus. The proposal is opposed by the Fraternal Order of Police, Lodge 7, which represents rank-and-file officers.

“That is what is at the core of all of this,” said Ald. Byron Sigcho-Lopez (25th Ward).

Lightfoot was working to push her plan for the oversight board through the City Council when it ran aground amid a dispute between the mayor and Ald. Chris Taliaferro (29th Ward) over who should have final say on policy. Then the pandemic hit.

Taliaferro and police reform activists contend the Community Commission for Public Safety and Accountability should have the final say on policy disputes between the police department and its two oversight agencies. The mayor wants to retain that power.

Taliaferro did not respond Wednesday to a request for comment from WTTW News.

The seven-member Community Commission for Public Safety and Accountability would not have the power to hire or fire the police superintendent, chief administrator of the Civilian Office of Police Accountability and to select members of the Police Board, key demands of police reform activists, according to the mayor’s proposal.

The mayor will pick from “a short list of candidates” developed by the commission for those top jobs. If the mayor rejects all of the recommendations, the commission must generate a new list, according to the proposal.

All must be approved by the City Council.

The measure backed by the mayor would also create councils in each of the city’s 22 police districts, made up of three elected members and several unelected members “to ensure engagement of the full community,” according to the mayor’s office.

One elected member from each district council would serve on a committee to nominate two candidates for each seat on the Community Commission. The mayor would pick from the two finalists, and that selection must be confirmed by the City Council, according to the mayor’s office.

A majority of the Community Commission members “will be selected based on their expertise in areas like civil rights, social work, work with immigrant and undocumented communities, and law,” according to the mayor’s office.

Two of the seven commissioners must be between the ages of 18-24 and have experience with police misconduct, according to the mayor’s office. That was a key demand of activists pushing for civilian oversight of the police.

Ald. Harry Osterman (48th Ward), the sponsor of the measure, said he was hopeful that negotiations will restart in “very short order.”

Osterman acknowledged that community oversight is “something left undone” after the outcry caused by Laquan’s death.

An effective community oversight board will help “create and restore trust” in the Chicago Police department, Osterman said.

“It is more critical now more than ever,” Osterman said.