Floyd Mourned, Celebrated as Death Used as Call to Action 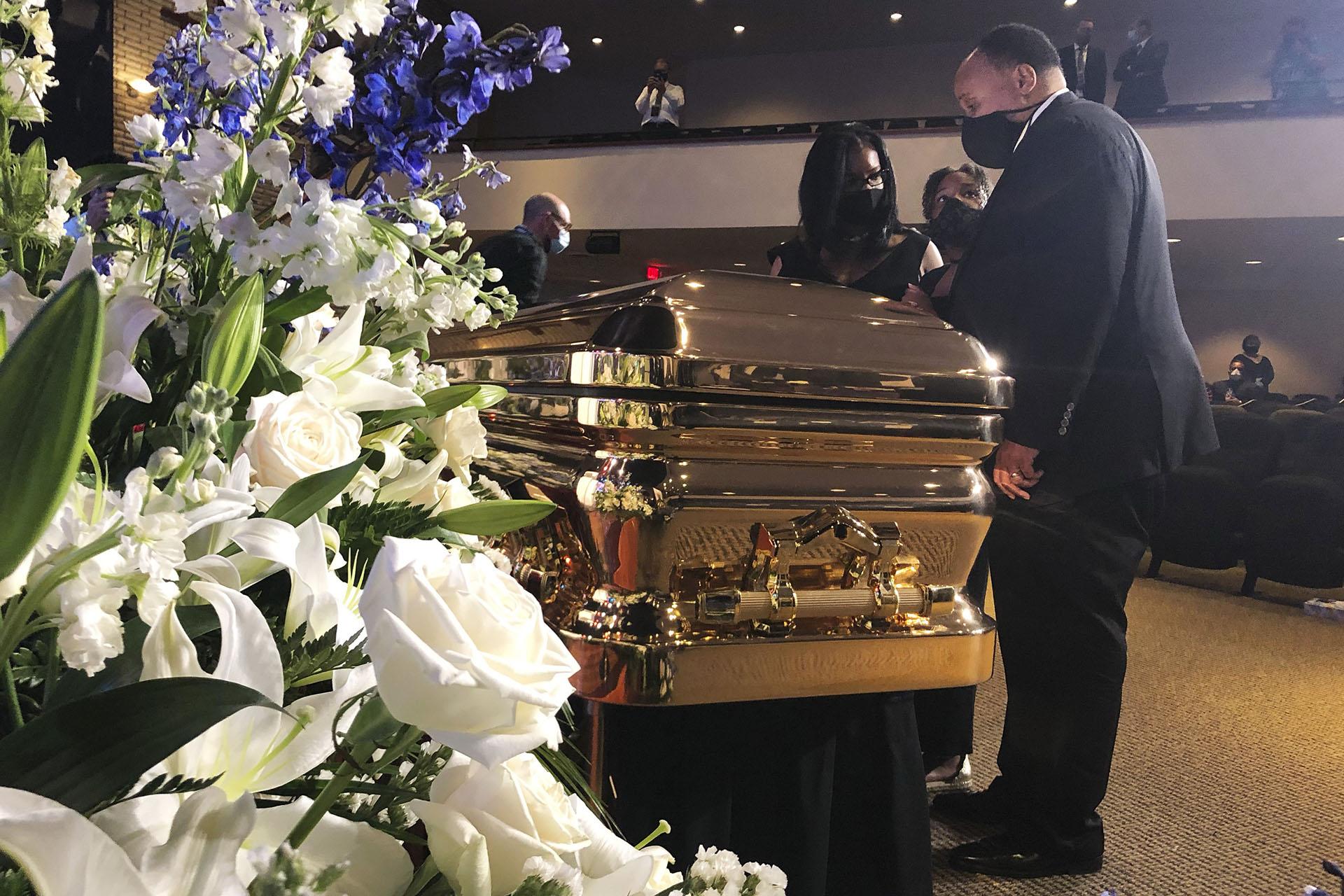 MINNEAPOLIS (AP) — The mural of George Floyd projected above his golden coffin, where mourners knelt and cried, paused and prayed at his memorial service Thursday had a simple message: “I can breathe now.”

Celebrities, civil rights activists, politicians and family members of Floyd sang “Amazing Grace,” prayed and joined together in a rousing memorial that was both a celebration of his life and a mourning of a man whose death at the hands of police has sparked protests nationwide and calls for an end to racial injustice.

Mourners wore masks, some with the words “I can’t breathe” on them, some of the last words Floyd said on the streets of Minneapolis just 3 miles from where the service was held at the Frank J. Lindquist sanctuary at North Central University. Some in attendance bumped elbows, rather than hug or shake hands, at the memorial taking place in the midst of the coronavirus pandemic.

It was not the coronavirus that killed Floyd, the family’s attorney Ben Crump said, but the “pandemic of racism and discrimination.”

Floyd’s brother and other family members told personal stories about dancing, playing football, cooking and enjoying life together. They said he was known by the endearing nickname “Big George.”

“George, he was like a general,” brother Philonise Floyd said. “Every day he would walk outside there would be a line of people wanting to greet him. ... He was powerful, man. He had a way with words. ... Everybody loved George.”

It was as the first service planned over the next six days across three communities where Floyd was born, grew up and died.

Projected above the pulpit inside the sanctuary was the blue and orange mural that’s been painted at the site of a makeshift memorial in the neighborhood where Floyd pleaded for air on May 25 as a white Minneapolis police officer pressed his knee into the handcuffed black man’s neck for several minutes even after Floyd stopped moving and pleading for air.

A small band and choir sang “Goin’ Up Yonder” and other classic gospel songs as mourners gathered.

The Rev. Al Sharpton was among those who spoke.

“George Floyd should not be among the deceased,” Sharpton said. “He did not die of common health conditions. He died of a common American criminal justice malfunction. He died because there has not been the corrective behavior that has taught this country that if you commit a crime, it does not matter if you wear blue jeans or a blue uniform you must pay for the crime you commit.”

After the first service, Floyd’s body will go to Raeford, North Carolina, the state where he was born 46 years ago, for a two-hour public viewing and private service for the family on Saturday.

Finally, a public viewing will be held Monday in Houston, where he was raised and lived most of his life. A 500-person service on Tuesday will take place at The Fountain of Praise church and will include addresses from Sharpton, family attorney Ben Crump, and the Rev. Remus E. Wright, the family pastor. Former Vice President Joe Biden, the presumptive Democratic presidential nominee, may attend, and other political figures and celebrities are expected as well. A private burial will follow.

Floyd’s final journey was designed with intention, Sharpton said ahead of Thursday’s service. Having left Houston for Minneapolis in 2014 in search of a job and a new life, Floyd will retrace that path.

Clayborne Carson, director of the Martin Luther King, Jr. Research and Education Institute at Stanford University, said the impact of Floyd’s death would ultimately be measured by changes in how police treat African Americans and the disparate rates at which black men are incarcerated.

“Otherwise, it’ll just be the next George Floyd and the one after that,” he said.