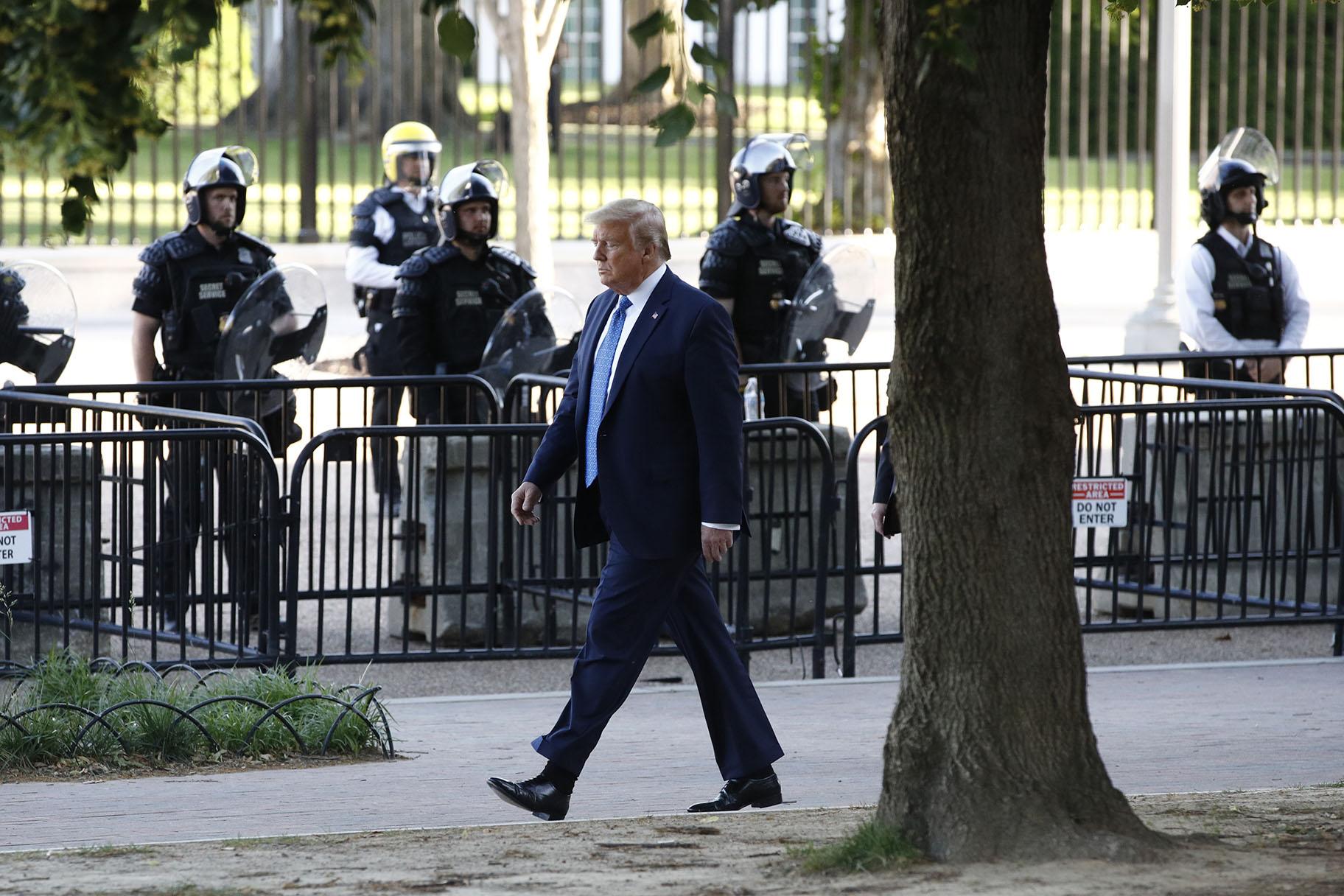 President Donald Trump walks in Lafayette Park to visit outside St. John’s Church across from the White House Monday, June 1, 2020, in Washington. Part of the church was set on fire during protests on Sunday night. (AP Photo / Patrick Semansky)

SACRAMENTO, Calif. (AP) — Several Democratic governors on Monday pushed back against President Donald Trump’s threat to deploy the U.S. military unless they dispatch National Guard units to “dominate the streets” in reaction to the violence that has erupted across the country.

Illinois Gov. J.B. Pritzker said he doesn’t believe the federal government can send military troops into his state. He accused the president of creating an “incendiary moment” by threatening to do just that to quell violence that has arisen as demonstrators have taken to the streets in reaction to the killing of George Floyd in Minneapolis.

“I reject the notion that the federal government can send troops into the state of Illinois,” Pritzker said on CNN after Trump urged governors to deploy the Guard. If they did not, he said he would send in “thousands and thousands” of soldiers.

Pritzker was among the first governors to react to Trump’s comments, which came hours after the president called governors “weak” and urged them to take a more aggressive response to weekend violence. It came as Americans gathered to protest police brutality against black Americans following the killing of Floyd, who was handcuffed and on the ground pleading for air as a white police officer pressed a knee on his neck for several minutes.

Some demonstrations have turned violent, with people breaking into and stealing from businesses, smashing car windows and setting fires.

In New York, Gov. Andrew Cuomo has not deployed the state’s National Guard to New York City, although he said earlier Monday the state had 13,000 troops that “we can use at any moment.”

“I say thank you but no thank you,” Cuomo said on CNN about Trump’s call to send military troops to the states.

At least 23 states and the District of Columbia had already deployed guard troops as of Monday morning, according to a statement from the National Guard. It wasn’t clear whether the action would be enough to satisfy the president. Trump took no questions from reporters and did not say how he would decide whether a state’s response was sufficient.

Democratic Gov. Jay Inslee of Washington, who has activated the state’s guard, said in a statement he prays “no soldier and no civilian is injured or killed by this reckless fit.”

“This president has repeatedly proven he is incapable of governing and shown nothing but false bravado throughout the chaos that has accompanied his time in office,” Inslee said in a statement.

Nevada Gov. Steve Sisolak, also a Democrat, said any suggestions the state’s National Guard is ill equipped to handle the states needs is “misinformed.” “As the Commander In Chief of the Nevada National Guard I can state, categorically, that they have done their duty to protect all Nevadans, and will continue to do so.”

In neighboring Oregon, Gov. Kate Brown said the violence is being perpetrated by a small segment of demonstrators. She refused to deploy the National Guard on Sunday at Portland Mayor Ted Wheeler’s request because she was concerned it would escalate a tense situation, but on Monday activated 50 unarmed guard members in support roles.

“You don’t defuse violence by putting soldiers on the streets,” Brown, a Democrat, said earlier Monday in reaction to Trump’s comments about governors being weak in their response. “Trump wants governors to deploy the National Guard as a show of force to intimidate the public. I want to ensure that the public can safely raise their voices in this much-needed call for reform.”

She didn’t immediately comment on Trump’s remarks about deploying the U.S. military.

Nor did California Gov. Gavin Newsom, who has deployed thousands of guard troops to Los Angeles and other cities. He called Trump’s morning comments “noise” and avoided addressing them directly, although he said the nation is desperate for leadership.