A corrections officer at the Cook County Jail has died after testing positive for COVID-19, and the Cook County sheriff is awaiting the results of an autopsy to see if a second officer also died due to complications from the coronavirus.

“Our hearts are broken over the loss of Officer Rivera,” the Sheriff’s Office said in a statement, “and we send our deepest condolences to her family and loved ones.”

Rivera joined the Sheriff’s Office in 2012 and most recently was assigned to the Residential Treatment Unit. The Sheriff’s Office said it considers her death to be in the line of duty and will be “strongly advocating” for her family to receive all the benefits that designation affords.

“Correctional staff like Officer Rivera are unsung heroes in the battle against this global pandemic, bravely working to keep their fellow colleagues, detainees, and the public safe from COVID-19,” the Sheriff’s Office said. “We will continue to confront this insidious and unrelenting disease.”

A second corrections officer, 38-year-old Antoine Stewart, also passed away Sunday. He was found at his home in suburban Crestwood and police there are investigating his death. According to the Sheriff’s Office, there were no signs of foul play and they are awaiting the results of an autopsy to determine the cause of his death.

Stewart joined the Sheriff’s Office in 2010. 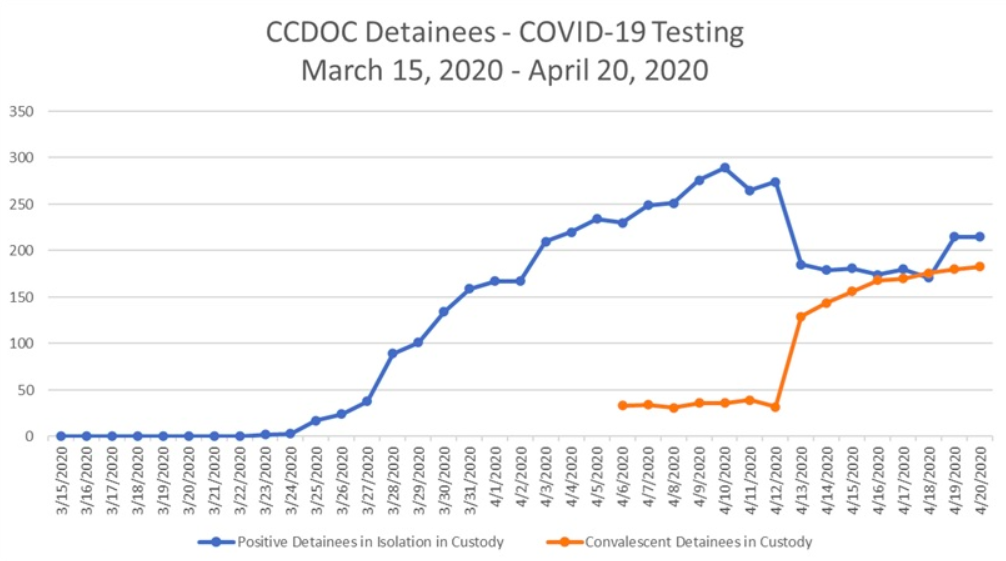 As of Monday evening, 215 Cook County Jail detainees, 185 corrections officers and another 34 Sheriff’s employees have tested positive for COVID-19. In addition, 183 detainees and 102 employees who had the virus have since recovered.

Two detainees – 42-year-old Rene Olivo and 53-year-old Juan Salgado Mendoza – also died on Sunday and Monday, respectively, after testing positive for the virus, according to the Sheriff’s Office. They are the fifth and sixth detainees to die at the jail from COVID-19.

Last week, Sheriff Tom Dart told WTTW News that he was “outraged” by media coverage of the outbreak at the jail, including a report from The New York Times which dubbed it the “largest-known source of U.S. coronavirus infections.”

His office said it’s “aggressively working round-the-clock to combat the global coronavirus pandemic.” That includes screening and testing all detainees, handing out personal protective equipment and isolating those who begin to show symptoms of COVID-19.

But Dart has been criticized by local advocates who say he hasn’t done enough to remove high-risk detainees from the jail, and by the union representing the corrections officers at the jail, who have complained about the quality and quantity of PPE and thermometers they have been given.

As of Tuesday, the jail’s detainee population had fallen to 4,217 – a decrease of more than 1,200 over the past month.