President Trump Goes on Clemency Spree, and the List is Long 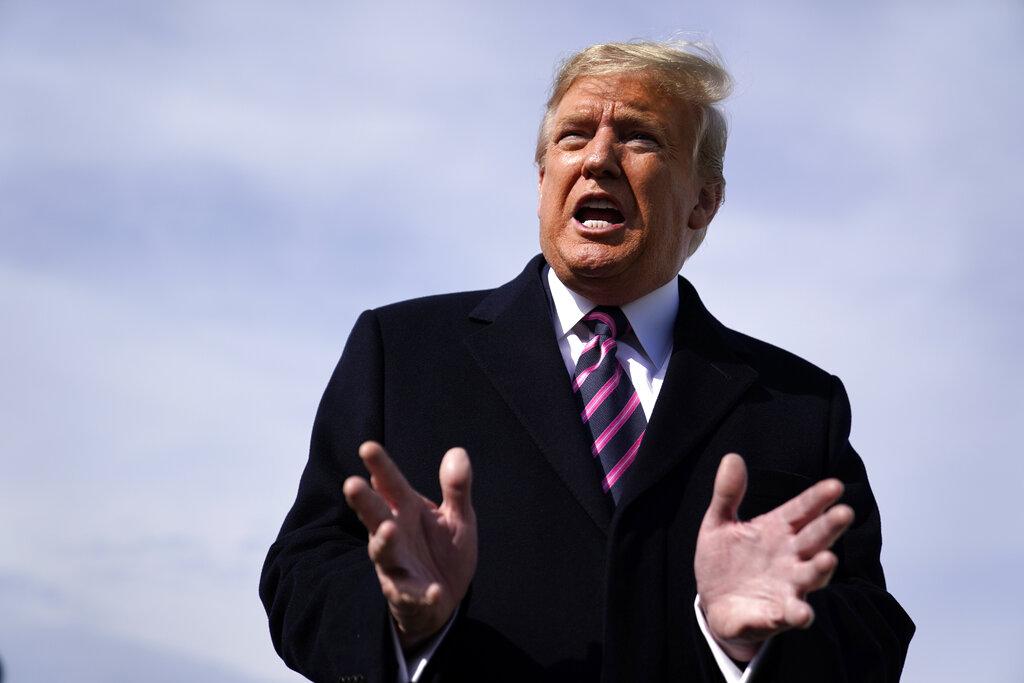 President Donald Trump talks to the media before he boards Air Force One for a trip to Los Angeles to attend a campaign fundraiser, Tuesday, Feb. 18, 2020, at Andrews Air Force Base, Md. (AP Photo / Evan Vucci)

Others who got a break from Trump include financier Michael Milken, who served two years in prison in the early 1990s after pleading guilty to violating U.S. securities laws, and Edward DeBartolo Jr., the former San Francisco 49ers owner convicted in a gambling fraud scandal after building one of the most successful NFL teams in history.

In all, Trump took clemency actions related to 11 people, his latest interventions in the justice system as he is under growing fire for weighing in on the cases of former aides. Trump made clear that he saw similarities between efforts to investigate his own conduct and those who took down Blagojevich, a Democrat who appeared on Trump’s reality TV show, “Celebrity Apprentice.”

“It was a prosecution by the same people — Comey, Fitzpatrick, the same group,” Trump said. He was referring to Patrick Fitzgerald, the former U.S. attorney who prosecuted Blagojevich and now represents former FBI Director James Comey, whom Trump fired from the agency in May 2017.

The clemency actions come as an emboldened Trump continues to test the limits of his office now that impeachment is over. The actions drew alarm from Democratic Rep. Bill Pascrell, Jr. of New Jersey, who accused Trump of using his unfettered pardon power “to shield unrepentant felons, racists and corrupt scoundrels”

Blagojevich was convicted on charges of political corruption, including seeking to sell an appointment to Barack Obama’s old Senate seat and trying to shake down a children’s hospital. But Trump said the former governor had been subjected to a “ridiculous sentence” that didn’t fit his crimes.

“That was a tremendously powerful, ridiculous sentence, in my opinion and in the opinion of many others,” Trump told reporters.

Trump also pardoned Kerik, who served just over three years for tax fraud and lying to the White House while being interviewed to serve as homeland security secretary. Trump’s White House lauded Kerik for having “courageously led the New York Police Department’s heroic response to the horrific attacks of September 11, 2001” and said that, “Since his conviction, he has focused on improving the lives of others, including as a passionate advocate for criminal justice and prisoner reentry reform.”

And it hailed Milken for having “democratized corporate finance by providing women and minorities access to capital that would have been unavailable to them otherwise.”

Trump said he had yet to think about pardoning his longtime confidant Roger Stone, who is scheduled to be sentenced Thursday, or granting clemency to several former aides who have ended up in legal jeopardy, including his former campaign manager Paul Manafort and disgraced former national security adviser Mike Flynn.

“Somebody has to stick up for the people,” Trump said.

As for Stone, in particular, he added: You’re going to see what happens. I think he’s treated unfairly.”

As for Tuesday’s actions, Pascrell said “the pardoning of these disgraced figures should be treated as another national scandal by a lawless executive.” He was referring specifically to the actions involving Blagojevich and Milken. And he predicted that, following Trump’s acquittal by the Republican-controlled Senate, “outrageous abuses like these will accelerate and worsen.”

Many of the pardons announced Tuesday were advocated by well-heeled friends of the president, including Sheldon Adelson, the billionaire casino magnate; the president’s personal lawyer Rudy Giuliani; Tom Barrack, the chairman of Trump’s inaugural committee; and Fox News personality Maria Bartiromo.

Milken’s advocates, for example, included all of the above.

But Trump also commuted the sentences of several people more typical of the flood of requests that presidents receive. They include Crystal Munoz, who has spent the last 12 years in prison after being convicted on marijuana charges. Her case was championed by the Texas A&M Criminal Defense Clinic, the Clemency for All Non-Violent Drug Offenders Foundation, as well as Alice Marie Johnson, whose life sentence Trump commuted in 2018 and whose story his campaign featured in a recent Super Bowl ad.

Blagojevich’s case had been championed by his wife, Patti, who went on a media blitz in 2018. Appearing on Trump favorite Fox News, she encouraged him to step in, praising the president and likening the investigation of her husband to special prosecutor Robert Mueller’s investigation into Russian meddling in the 2016 election — a probe Trump has long characterized as a “witch hunt.”

When Trump publicly broached the idea in May 2018  of intervening to free Blagojevich, he played down the former governor’s crimes. He said Blagojevich was convicted for “being stupid, saying things that every other politician, you know, that many other politicians say.”

Earlier Tuesday, the White House held a surprise press conference with a slew of football greats to announce that Trump had pardoned DeBartolo Jr., who was involved in one of the biggest owners’ scandals in the sport’s history. In 1998, DeBartolo pleaded guilty to failing to report a felony when he paid $400,000 to former Louisiana Gov. Edwin Edwards in exchange for a riverboat gambling license.

Ohio Pastor Darrell Scott, who had advocated for DeBartolo Jr.’s pardon, said that when he first brought DeBartolo Jr.’s case to the White House, the administration was consumed with other matters, including the Mueller investigation. Now that impeachment is over, he said, he expects Trump to moved forward with additional pardons.

“We finally get to breathe for the first time before something else comes,” he said. “I think they’re trying to play catch up.”