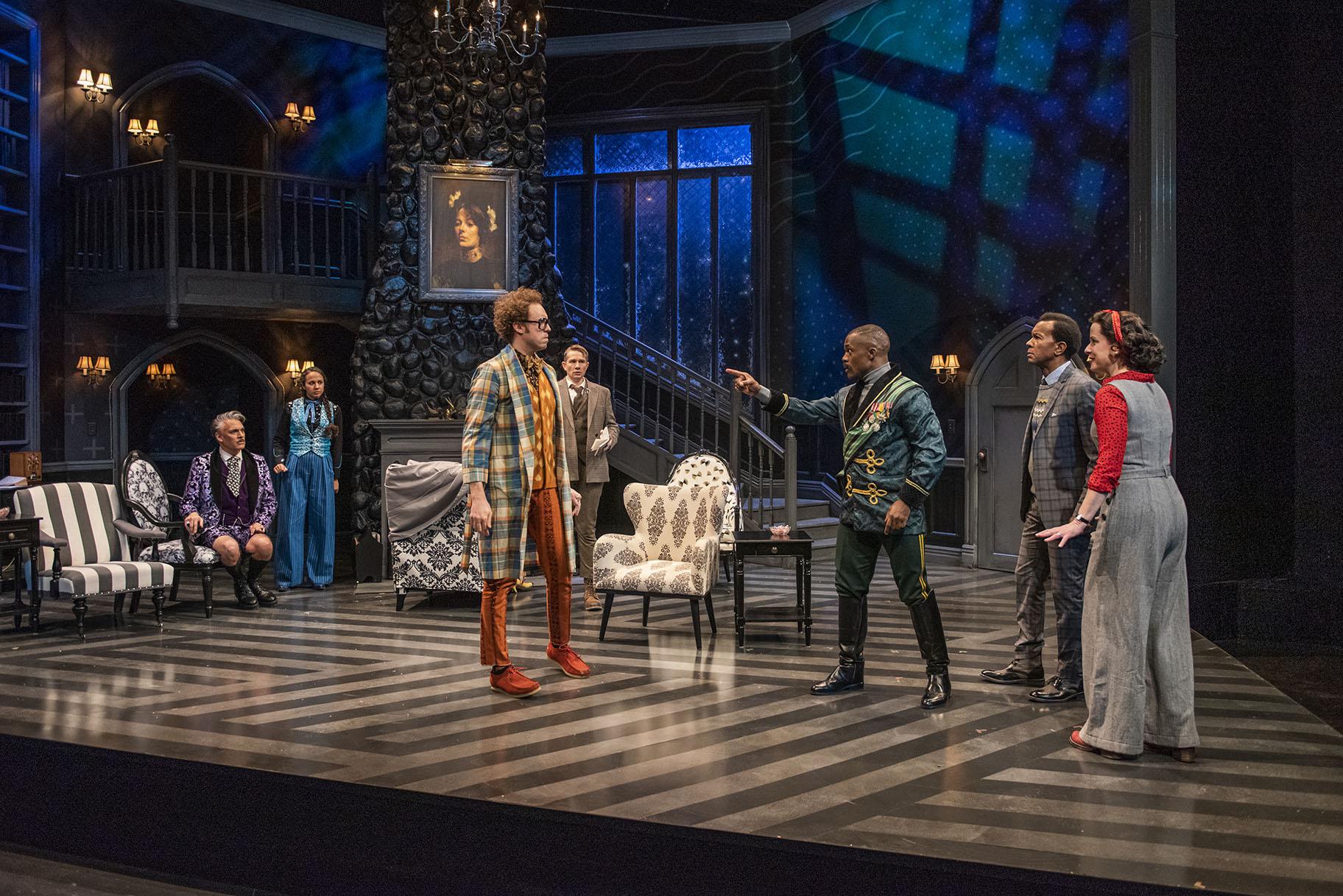 The cast of “The Mousetrap.” (Photo by Michael Brosilow)

Agatha Christie’s play, “The Mousetrap,” the classic murder mystery/whodunit that opened in London’s West End in 1952, and has the distinction of being the longest continuously running play (with a tenure precisely as long as Queen Elizabeth II’s reign, and with more than 26,000 performances to its credit in London alone), is now receiving a wonderfully entertaining and surprisingly revelatory revival at Court Theatre. Zestily directed by Sean Graney, it features a terrific cast comprised of many Court favorites.

At the very same time, Northlight Theatre is presenting the world premiere of Steven Dietz’s “How a Boy Falls,” a compelling, decidedly 21st century whodunit with very dark overtones that feed on this age of easily faked Internet identities and high-tech surveillance techniques, as well as the sort of profound family dysfunction that, in its way, also was chronicled in the plays of the ancient Greeks. Sharply directed by Halena Kays, its airtight, five-person cast conjures precisely the right mix of personalities, all of whom are entangled in deception, lies, subterfuge, loneliness, greed and guilt. Think of it as “disguise in plain sight.” 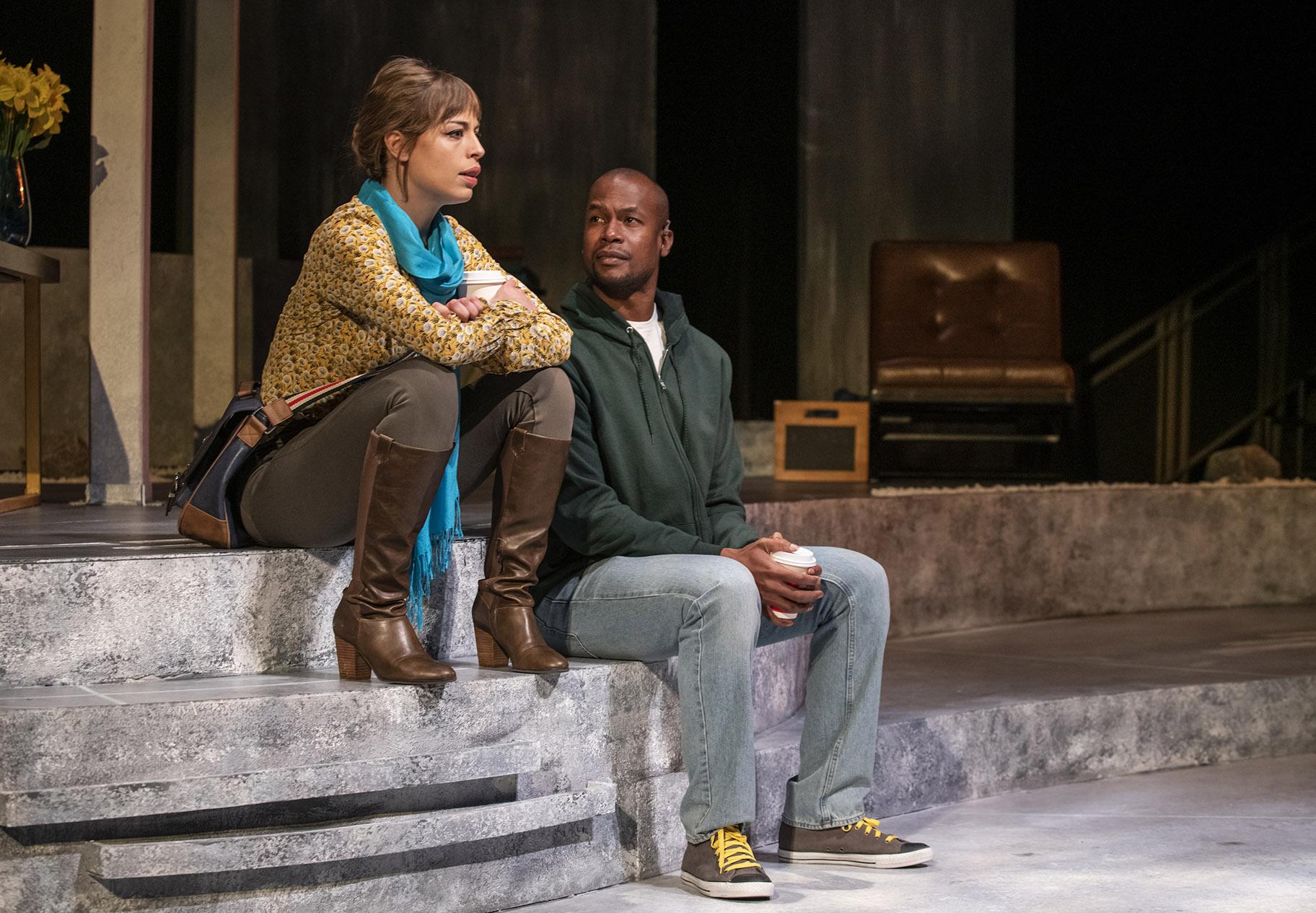 Cassidy Slaughter-Mason and Sean Parris in “How a Boy Falls.” (Photo by Michael Brosilow)

“The Mousetrap” was written in the wake of World War II, when the fallout of post wartime upheaval, displacement and impulsive romantic hookups were altering the social order. The surprising realization that comes with seeing “How a Boy Falls” within just a week of Christie’s work is to sense how the whole notion of identity – both true and false – is one of the true mysteries at the center of both plays, even if the stories being told are separated by enormous change. The fear factor is more often than not the result of strangers in our midst, but sometimes those strangers are seemingly well known to us. All too often we are, as the ghoulish nursery rhyme that serves as the theme song of “The Mousetrap” declares, no better off than the “Three Blind Mice.”

In order to keep the property afloat, the inexperienced couple has turned it into a guest house – a rough equivalent of today’s Airbnb operations. And as they welcome their first visitors – a notably eccentric cross section – not only is a fierce snow storm in progress, but news of the brutal murder of a local woman is announced on the radio, along with the fact that the unknown murderer is on the loose. 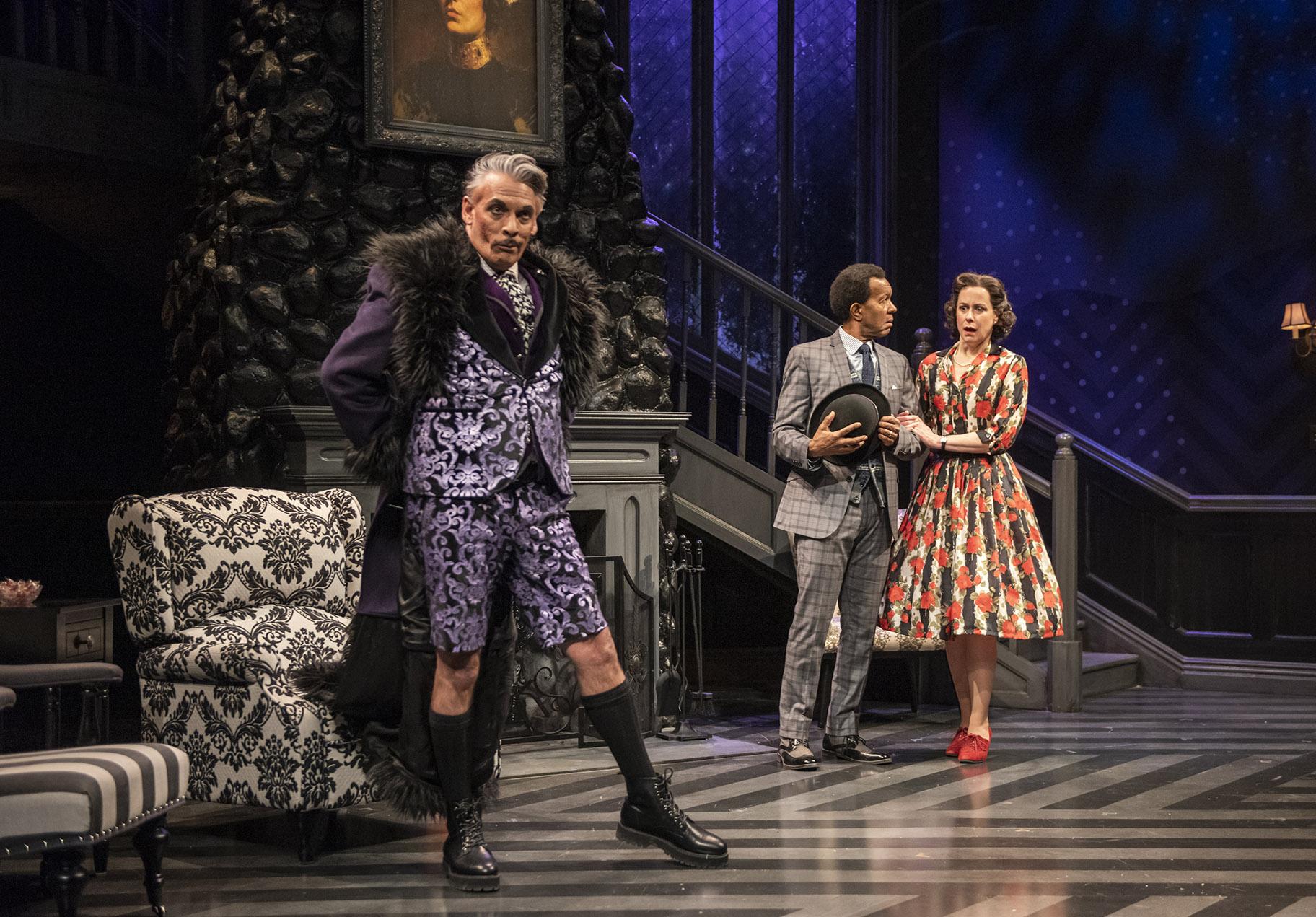 From left: David Cerda, Allen Gilmore and Kate Fry in “The Mousetrap.” (Photo by Michael Brosilow)

Among the guests to arrive are Christopher Wren (the irrepressible Alex Goodrich), a young wannabe architect; Mr. Paravicini (zany David Cerda), a wildly campy traveler who claims his car was upended in the snow; Mrs. Boyle (an ideally cranky Carolyn Ann Hoerdemann), a discontent woman preoccupied with rating every aspect of the new facility; Major Metcalf (Lyonel Reneau), whose uniform is the only real key to his identity; and Miss Casewell (the intriguing Tina Munoz Pandya), an enigmatic woman of indeterminate sexuality. Arriving unexpectedly – and on skis – is Detective Sergeant Trotter (fleet work by Erik Hellman), who believes the murderer might very well be in their midst.

Suffice it to say, pandemonium is the rule of the evening, and the actors capture the manic and farcical aspects of the story as well as the elements of guilt and paranoia stemming from the grim backstory to the murder – a crime involving a horrific case of child abuse that occurred some years earlier. The show also exposes Christie’s self-mocking wit and sharp sense of satire. There is a reason why her work endures.

“How a Boy Falls” also unspools in a grand home – this one a sleek, white, ultra-modern property in the San Francisco Bay Area that is perched at the edge of the ocean (and deftly designed by Lizzie Bracken). 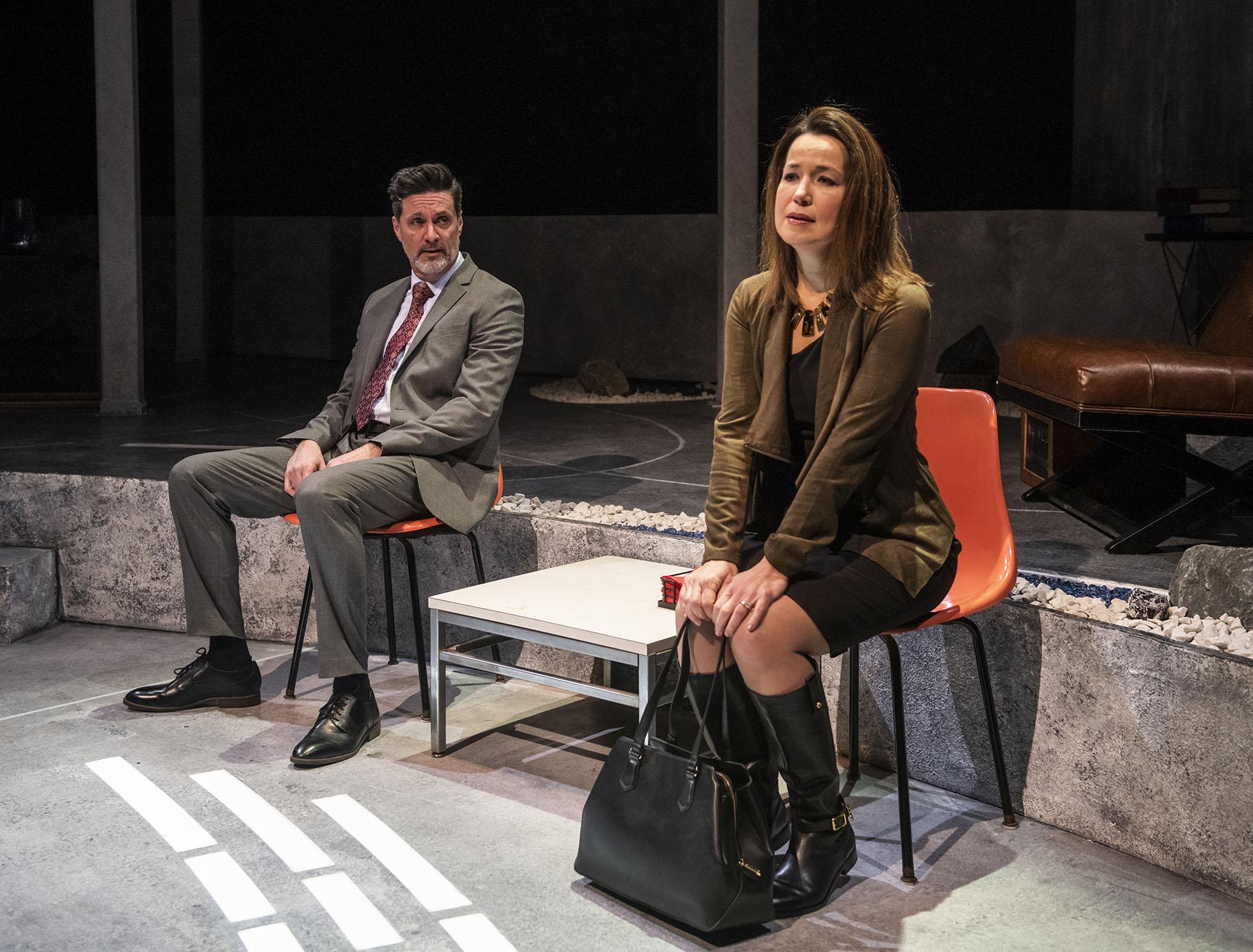 Tim Decker and Michelle Duffy in “How a Boy Falls.” (Photo by Michael Brosilow)

As it happens, Dietz’s story is set in motion in a cafe where two men who have never met till that moment – Sam (Sean Parris), a shy guy who works as a caterer, and Mitch (Travis A. Knight), a more aggressive type who works in the security business – eye the same attractive, 20-something woman who clearly is supposed to be meeting someone there. Mitch pushes Sam to connect with her.

The woman is Chelle (the charismatic Cassidy Slaughter-Mason). The man she is expecting is Paul (a coolly malevolent Tim Decker), the wealthy (and decidedly smarmy) tech industry maven who shares the handsome oceanside house with his bitter wife, Miranda (Michelle Duffy), and their young son, who she had rather late in life, and about whom she is very protective.

Paul has arranged an interview with Chelle, who he found on the internet, and who he wants to hire as a nanny. As it turns out, her resume is quite a work of fiction, but she is desperate for a live-in job. And although Miranda is not interested in having her around the house – and is especially worried that she will not keep her son away from a dangerous balcony – she is hired for the job. And, once again, as in “The Mousetrap,” no one here is quite who they seem to be. And the young boy soon falls from the balcony and appears to have been washed out to sea. 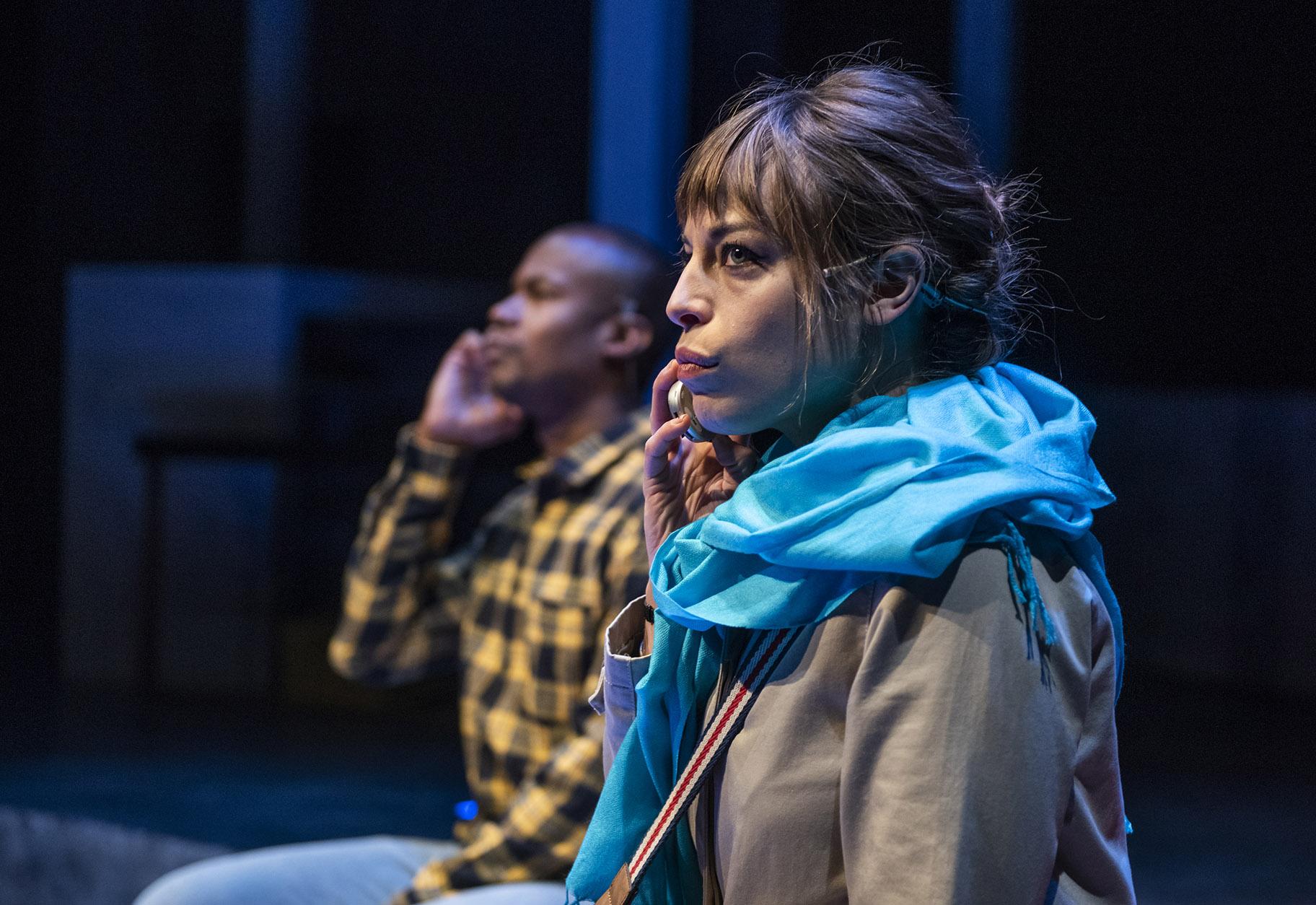 Cassidy Slaughter-Mason and Sean Parris in “How a Boy Falls.” (Photo by Michael Brosilow)

As it turns out, no one is exactly who they seem to be. Both old-fashioned mendacity and the latest high-tech electronic surveillance are in play. The (unseen) child is the pawn in a multifaceted power struggle involving everything from intellectual property theft to the desire to be something more than what you really are. And along the way Dietz suggests that even the most sophisticated forms of surveillance are no match for the mechanisms of human nature.