Now on stage: the do-it-yourself spirit of Chicago storefront theater meets the DIY forces of Chicago punk rock in the ‘80s.

A new rock musical slam dances to the incredible true story of a punk band from Evanston made up of two teenagers and two preteens.

Paris Schutz: This is the musical “Verboten.”

And this is the band Verboten that inspired the show. Yes, 11- to 15-year-olds playing their first gig at the Cubby Bear in 1983.

Jason Narducy, Verboten: We were terrified. We were playing in a bar in Chicago. It’s absurd. I remember being very nervous.

But there was also a lot of love in the room, in that community, because Tracey was so charming and she befriended all these people in the punk rock community.

Schutz: At 15, Tracey Bradford was the oldest member of the band, and she was known as the den mother of the group.

Narducy: I’m so glad my dad recorded that because I think if I told people that I played at Cubby Bear when I was 11 years old they wouldn’t believe me.

Schutz: The story gets even punkier, because Tracey’s cousin was visiting town. It was the first concert attended by her cousin from Virginia – 13-year-old Dave Grohl, future star of Nirvana and Foo Fighters.

He talked about that night with his now grown-up cousin Tracey in the show “Sonic Highways.”

“For me, that night changed everything I knew about music. … Why can’t I do this?” he says in the show.

Schutz: And he singled out Verboten’s guitar player: “Watching him was the first time that I ever thought, ‘If that kid right there does it, then I can do it too.’”

This production by the House Theatre of Chicago combines punk songs with new music written by Narducy, who worked with cast members on their approach to the music. 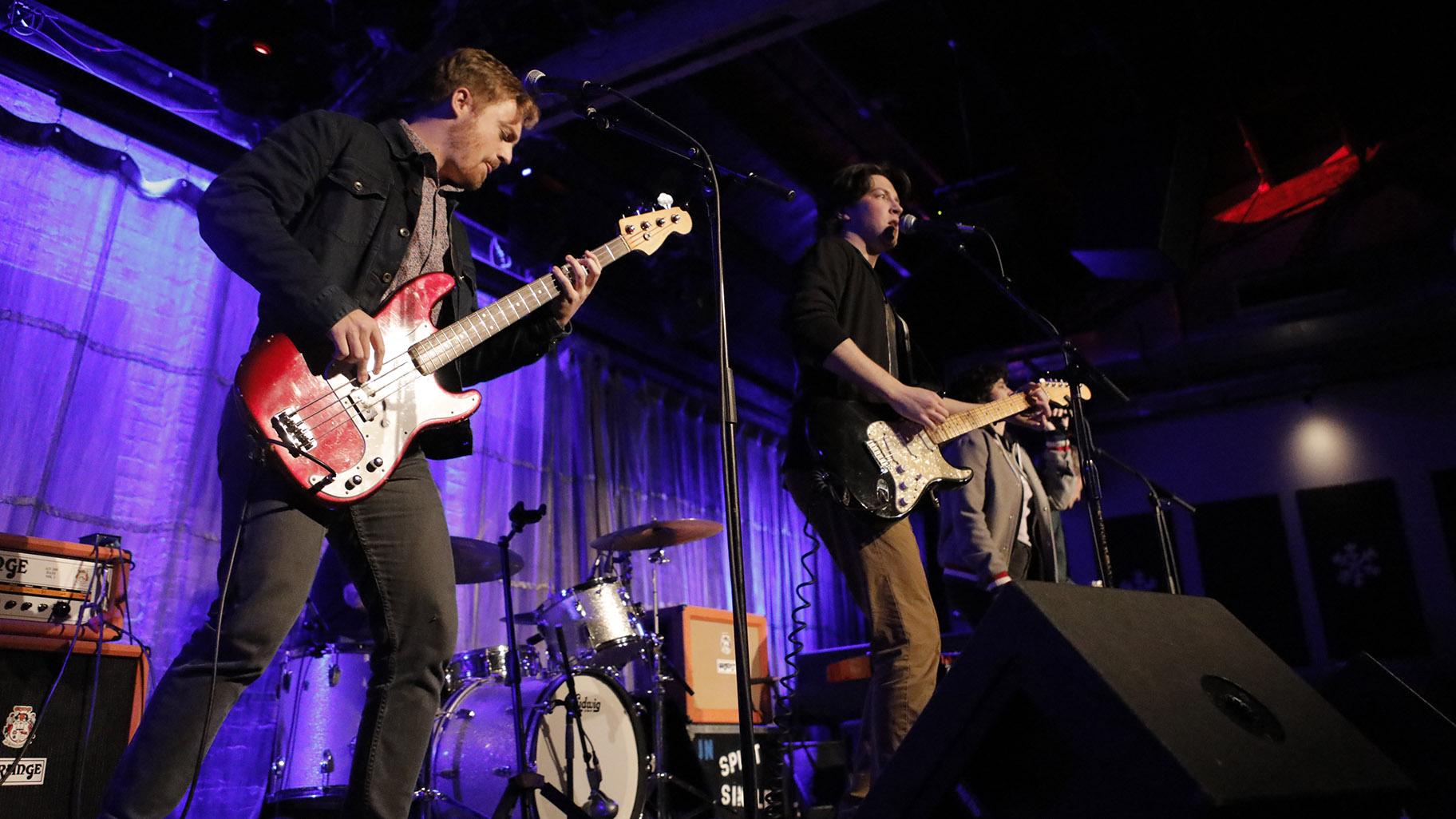 Matthew Lunt and Kieran McCabe, cast members of the musical “Verboten,” perform at a warm-up show last month at Space in Evanston. (Photo by Audrey Palumbo)

He talks about the importance of being in a band in his formative years.

Narducy: It was everything. It gave me purpose. It gave me self-worth. It was empowering to be able to play guitar and write a song with my friends.

There was so much turmoil. I was an only child in the middle of a divorce and there was just a lot of resentment and a lot of difficulty at home, and once I found a guitar and my ability to write and to play, I just went out looking for my team, looking for my people.

Brett Neveu, playwright: There’s a lot of sort of personal themes in the show from Jason – themes of identity, feelings of family, found family, the family you have, the family you trust. Who do you trust? And what it means to make music.

Schutz: Narducy stuck with music. He plays bass in Bob Mould’s band and has his own group, Split Single.

The original Verboten also performed on the Chicago children’s show, “Kidding Around.” But after just a few gigs, the band broke up.

Narducy: We had a band meeting with all the parents at Zach’s house. At this point Tracey was 16 and I remember her saying, “We need to put out a 7-inch and get a van and go on tour,” and my dad said, “Well, Jason’s going to finish sixth grade,” and that was the end of that. But there were no hard feelings.

Neveu: One of the main themes that Jason and I talked about that really cued me in to what the show was about was that thing that happens at that age, age 13, 14, 15, when you find that thing, that sound, that show, that movie, that something that makes you feel like “I own that, that’s mine.”

The original members of Verboten have remained friends in the 38 years since they formed the band. Jason Narducy is the only one who is still in the music industry.

The House Theatre of Chicago’s show “Verboten” is on stage through March 29 at the Chopin Theatre, 1543 W. Division St.