Lev Parnas says he delivered an ultimatum in May, at Giuliani’s behest, to the incoming president of Ukraine that no senior U.S. officials would attend his inauguration and vital American security aid would be withheld if an investigation into Biden wasn’t announced.

He said Trump was aware of Giuliani’s efforts to secure an investigation and the president was briefed regularly.

“President Trump knew exactly what was going on,” said Parnas, a Soviet-born Florida businessman facing a raft of criminal charges related to campaign finance violations. “He was aware of all my movements. I wouldn’t do anything without the consent of Rudy Giuliani, or the president.”

For his part, Trump on Thursday repeated denials that he is acquainted with Parnas, despite numerous photos that have emerged of the two men together , including a May 2018 dinner at the White House.

“I meet thousands and thousands of people as president. I take thousands of pictures,” Trump said, speaking to reporters in the Oval Office. “I don’t know him, I never had a conversation that I remember with him.”

Parnas made several potentially explosive claims in a televised interview Wednesday night with MSNBC’s Rachel Maddow. The day after Parnas said he delivered the message, the State Department announced that Vice President Mike Pence would no longer be attending the inauguration of Ukrainian President Volodymir Zelenskiy.

Parnas alleged that Trump ordered Pence to stay away at the behest of Giuliani to send a clear message to the incoming Ukrainian administration that they needed to take seriously the demand for an investigation into Biden, a Democratic presidential candidate seen as a potential threat to Trump’s 2020 reelection.

Parnas said every communication he had with Zelenskiy’s team was at the direction of Giuliani, whom he regularly overheard briefing Trump about their progress by phone. 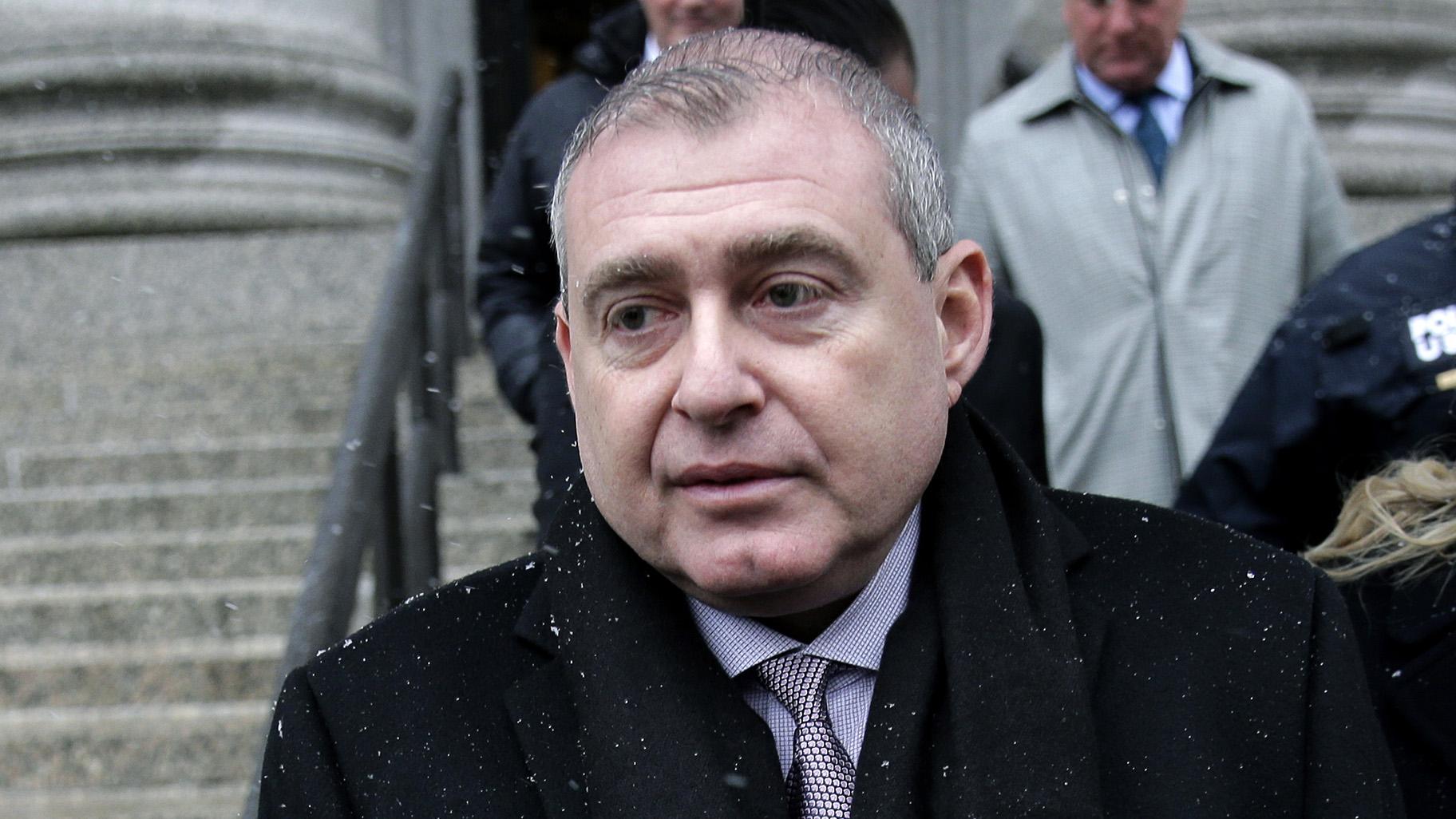 “I feel sorry for him,” Giuliani said Wednesday in a text message to an AP reporter. “I thought he was an honorable man. I was wrong.”

Asked directly if Parnas was lying, Trump’s lawyer replied, “I’m not responding yet.”

Parnas said he also heard Giuliani and another Trump-aligned defense lawyer, Victoria Toensing, briefing Attorney General William Barr by phone about their efforts to pressure the Ukrainian government to announce the investigation into Biden and his son Hunter’s business dealings.

“Barr was basically on the team,” Parnas said.

The Justice Department said in September that Trump had not spoken to Barr about having Ukraine investigate the Bidens and that the attorney general had not discussed Ukraine with Giuliani. Justice Department spokeswoman Kerri Kupec said Wednesday that Parnas’ claims were “100% false.”

Toensing posted on Twitter that Parnas “absolutely lied” about her conversations with Barr.

Pence, who Parnas said raised the need for an investigation into the Bidens in a September meeting with Zelenskiy in Poland, added to the flurry of denials issued Thursday.

“I don’t know the guy,” said Pence, who has himself been photographed standing with Parnas. The vice president called Parnas’ claim that he had participated in the effort to spur the Ukrainians to open an investigation into the Bidens “completely false.”

The new accusations came as House Democrats made public a trove of documents, text messages and photos from Parnas’ smartphones that appear to verify parts of his account.

The documents, released just ahead of the start of Trump’s Senate impeachment trial, could raise pressure on the Senate as it debates whether to hear witnesses.

A federal judge earlier this month ruled that Parnas could provide the materials to Congress as part of the impeachment proceedings. Democrats voted in December to impeach Trump for abuse of power and for obstruction of Congress.

House Intelligence Committee Chairman Adam Schiff, one of seven Democratic impeachment managers who will effectively act as prosecutors during Trump’s Senate trial, said Thursday they are reviewing Parnas’ interviews and documents “to evaluate his potential testimony.” It is likely that the House managers, not senators, would make a motion to call witnesses such as Parnas.

“Mr. Parnas’ public interviews in the last 24 hours shed additional insights into the origins of the scheme, the work he and Rudy Giuliani were doing on the president’s behalf, and other members of the administration who were knowledgeable,” Schiff said.

But Senate Republicans appeared largely unmoved, with some suggesting they were unfamiliar with who Parnas is, despite months of media coverage and prior testimony in the House about his ties to Giuliani’s efforts in Ukraine.

“If I had ever heard of him before yesterday I’m not aware of it,” said Sen. Roy Blunt, a Missouri Republican. “This is the indicted guy, right?”

House Republican leader Kevin McCarthy deflected questions about donations from Parnas to a political action committee he runs and a photo of him with Parnas at Trump’s inauguration in 2017.

“People come to events, and they take photos with me,” McCarthy said. The GOP leader added that in his view Parnas “lacks all credibility’’ and accused the news media of trying to build him up.

Democrats, meanwhile, pointed to text messages among the newly disclosed materials that have raised questions about the possible surveillance of former Ambassador to Ukraine Marie Yovanovitch before she was ousted by the Trump administration last spring.

The messages show that Robert F. Hyde, a Republican candidate for Congress from Connecticut, disparaged Yovanovitch in messages to Parnas and gave him updates on her location and cellphone use.

FBI investigators were observed Thursday morning at Hyde’s home and business addresses. Charles Grady, a spokesman for the FBI in Connecticut, confirmed that agents had been at the locations tied to Hyde but said he could not provide additional information.

The text and phone records show Parnas communicating with Giuliani multiple times a day before Yovanovitch’s removal, as well as a handwritten note that mentions asking Ukraine’s president to investigate “the Biden case.”

Among the documents is a screenshot of a previously undisclosed letter from Giuliani to Zelenskiy dated May 10, 2019, which was shortly after Zelenskiy was elected but before he took office. In the letter, Giuliani requests a meeting with Zelenskiy “as personal counsel to President Trump and with his knowledge and consent.”

The Associated Press reported in October that Zelenskiy had huddled three days earlier, on May 7, with a small group of key advisers in Kyiv to seek advice about how to navigate the insistence from Trump and Giuliani for a probe into the Bidens. He expressed his unease about becoming entangled in the American elections, according to three people familiar with the details of the three-hour meeting. They spoke on the condition of anonymity because of the diplomatic sensitivity of the issue, which has roiled U.S.-Ukrainian relations.

One of the documents released by Democrats is a note from Parnas handwritten on stationery from the Ritz-Carlton Hotel in Vienna that says “get Zalensky to Annonce that the Biden case will be Investigated.”

Parnas told Maddow he took the notes as he was speaking by phone to Giuliani, receiving precise instructions about the demands Trump wanted to convey to Zelenskiy’s team.

Trump asked Zelenskiy in a July 25 call to investigate the Bidens. Hunter Biden served on the board of a gas company based in Ukraine.

Parnas and his business partner, Igor Fruman, both U.S. citizens who emigrated from the former Soviet Union, were indicted last year on charges of conspiracy, making false statements and falsification of records. Prosecutors allege they made outsize campaign donations to Republican causes after receiving millions of dollars originating from Russia. The men have pleaded not guilty.

Parnas’ lawyer, Joseph Bondy, told The New York Times that his client is looking to cooperate with prosecutors in his case, who are investigating Giuliani and his dealings in Ukraine.

“We very much want to provide substantial assistance to the government,” Bondy told the Times.

Parnas told the newspaper that although he didn’t speak with Trump directly about the efforts, he met with the president on several occasions and was told by Giuliani that Trump was kept in the loop.

In several of the documents, Parnas communicated with Giuliani about the removal of Yovanovitch. The ambassador’s ouster, ordered by Trump, was at the center of the Democrats’ impeachment inquiry. Yovanovitch testified in the House impeachment hearings that she was the victim of a “smear campaign.”

Trump on the July call told Zelenskiy that Yovanovitch was “going to go through some things.” She had been recalled from her diplomatic post roughly three months earlier.

On April 23, just before Yovanovitch was directed to return to the United States, Giuliani texted Parnas, “He fired her again.” Parnas texted back, “I pray it happens this time I’ll call you tomorrow my brother.”

After texting about the ambassador, Hyde gave Parnas detailed updates that suggested he was watching her. In one text, Hyde wrote: “She’s talked to three people. Her phone is off. Her computer is off.” He said she was under heavy security and “we have a person inside.”

Hyde texted Parnas that ‘‘they are willing to help if we/you would like a price,” and “guess you can do anything in Ukraine with money ... is what I was told.”

In a Twitter post Tuesday, Hyde called Parnas a “dweeb” and suggested the messages about surveilling the ambassador were a joke. He said he welcomed an investigation.

The text messages show that Parnas consulted Giuliani in January 2019 after the U.S. denied a visa to former Ukrainian Prosecutor General Viktor Shokin. Giuliani replied: “I can revive it.”

The following day, Giuliani told Parnas, “It’s going to work I have no 1 in it.” Giuliani then predicted “he will get one,” before giving Parnas the phone number for Jay Sekulow, the leader of the president’s personal legal team. Sekulow is expected to be part of Trump’s legal team during the impeachment trial.

Among the materials released from Parnas’ phone this week were more photos of him with Trump, as well as the president’s son Donald Trump Jr., first daughter Ivanka Trump, and her husband, Jared Kushner.

Asked by Maddow about Trump’s denial of knowing him, Parnas said he had spoken one-on-one with the president numerous times.

“He lied,” Parnas said of the president. “I mean, we’re not friends. Me and him didn’t watch football games together, we didn’t eat hot dogs. But he knew exactly who we were, who I was especially.”