Between 1953 and 1969, the Supreme Court decided some of the most monumental cases in U.S. history.

While the court’s decisions have been attacked in subsequent years, their legal findings have become widely accepted, argue University of Chicago law professors Geoffrey Stone and David Strauss in their new book “Democracy and Equality: The Enduring Constitutional Vision of the Warren Court.”

Stone joins “Chicago Tonight” on Tuesday to discuss the book.

Below, an excerpt from “Democracy and Equality.” 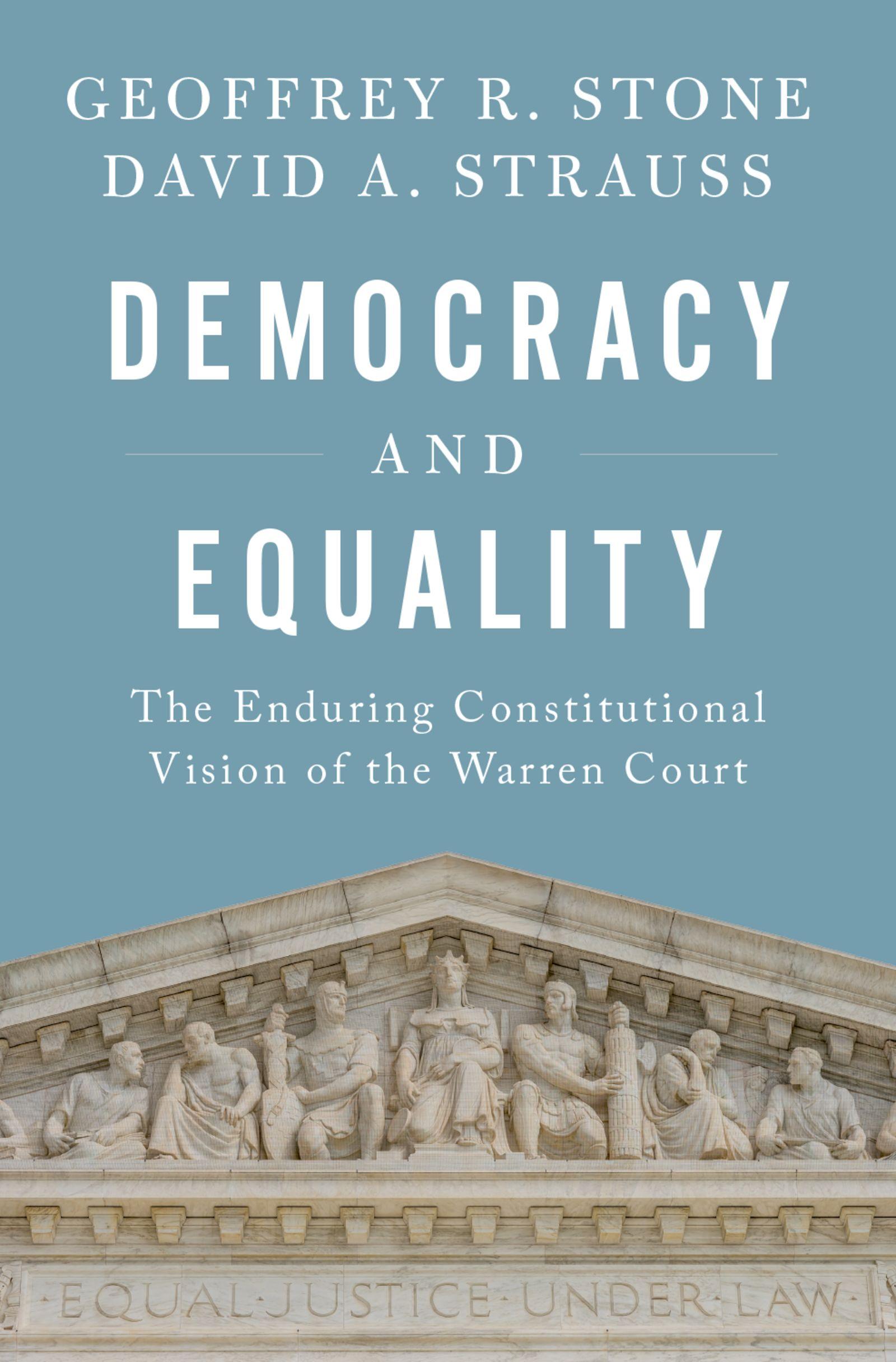 Chief Justice Earl Warren retired from the Supreme Court in 1969, a half-century ago, marking the end of the Warren Court. Before   Warren   joined   the   Court,   school   districts   in   seventeen American  states  required  black  schoolchildren  to  go  to  different schools  from  white  children.  In twenty-seven states, it was illegal for a black person to marry a white person. Every state in the nation violated the principle of “one person, one vote,” many of them grotesquely so. Government officials could sue their critics for ruinous damages for incorrect statements, even if the critics acted in good faith. Members of the Communist Party and other dissenters could be criminally prosecuted for their speech. Married couples could be denied access to contraception. Public school teachers led their classes in overtly religious prayers. Police officers could interrogate suspects without telling them their rights. People were convicted of crimes on the basis of evidence that police officers had seized illegally. And criminal defendants who could not afford a lawyer had no right to a public defender.

All of these criticisms are mistaken. Critics who say that the Warren Court “went too far” or was “too activist” should be asked: which of the Warren Court’s decisions would you overturn? Would you say that states should have the power to segregate public schools? Or make it a crime to marry someone of a different race? Or forbid married couples to use contraceptives? Would you really reject the principle of one person, one vote? Do you disagree that the central meaning of the First Amendment is that people must be free to criticize the government? Or that a criminal defendant who can’t afford a lawyer should have one nonetheless? Some of the most conservative Supreme Court justices of the last fifty years have accepted—even celebrated—the warnings required by the Warren Court’s once-controversial decision in Miranda v. Arizona. So what was it about the Warren Court that was so activist, or excessive, or illegitimate?

Today, especially, it is important to see that these criticisms of the Warren Court are wrong. Since 1969, the Supreme Court has be- come increasingly conservative. In this environment, the notion that the rulings of the Warren Court were examples of excessive judicial “activism” that were not based on law is especially toxic. That line of criticism opens the door to conservative claims that conservatives, alone, are truly committed to the rule of law—that the decisions of the Warren Court were the product of the justices’ political opinions or fuzzy liberal sentiment, not real law. It rationalizes aggressively conservative judicial decisions as a necessary corrective—or, as some self-identified moderates might say, an understandable reaction—to the supposed liberal excesses of the Warren era. All of that is wrong. The Warren Court’s decisions—unlike, it should be said, many decisions of the conservative Courts that followed it—were principled, lawful, and consistent with the spirit and fundamental values of our Constitution.

Democrats, with a Small d

The Warren Court’s vision, at its core, was deeply democratic. The Warren Court’s critics, including many sympathetic critics, often portray the Court’s members as judicial imperialists who simply took over policymaking from elected representatives. But that is not what the Warren Court did. Earl Warren was one of the most successful politicians of his generation—and, by the way, a Republican—and the Warren Court’s most fundamental commitment was to the principles of democracy.

Of course, many of the Warren Court’s greatest decisions did reject laws enacted by the states. But those decisions, too, reflected a deep commitment to democracy. The Warren Court acted on the premise that the role of the Supreme Court is to intervene when American democracy was not truly democratic: when some groups were marginalized or excluded and denied their fair share of democratic political power. Most important, the Warren Court protected the interests of African Americans in the Jim Crow South, who were effectively kept from voting in many places and were utterly excluded, often violently, from positions of influence. The Warren Court protected political dissidents, stating unequivocally that free and open debate is a central commitment of any democratic government. In its “one person, one vote” decisions, the Warren Court put an end to manipulative and unjustified disparities in people’s ability to elect their representatives. The Warren Court acted on behalf of members of minority religious groups whose interests were disregarded by the majority, and of criminal defendants who were often also members of discriminated-against minority groups and who lacked any effective voice in politics.

Contrary to the critics, this was a principled and appropriate role for the Supreme Court to play. Ordinarily, the people’s elected representatives should make the important political decisions in a democracy. If the courts are to step in, they must have a reason: a reason why a particular issue should not be left to ordinary democratic processes. In the cases that made the Warren Court famous, there were such reasons. That is why the Warren Court’s decisions have held up over time.

In an interview near the end of his career, Earl Warren said that if the “one person, one vote” decisions had come earlier, Brown v. Board of Education—the decision that struck down school segregation—would not have been necessary, because truly democratic governments would have abolished segregation without the courts’ intervention. Warren’s statement was almost certainly unrealistic. But it reflected his deep belief in democracy, one that guided the work of his Court. The Warren Court did the things—fighting race discrimination, making sure that everyone’s vote counted the same, protecting dissidents from a majority that wanted to silence them—that a democracy needs to do and that elected representatives cannot always be trusted to do.