Hundreds of thousands of people thronged the streets of Tehran on Monday as Iran mourned the loss of its top military leader killed in an American drone strike in Iraq on Friday.

Gen. Qassem Soleimani is said to have been the mastermind behind the killing of hundreds of U.S. soldiers in Iraq, Syria and elsewhere. But in Iran he was both a military hero of the Iran-Iraq War (1980-88) and a political figure viewed by many observers as likely to be the next supreme leader of Iran.

President Donald Trump’s decision to assassinate Soleimani because of an alleged “imminent threat” to U.S. interests is already having major repercussions across the region. It’s also causing tension with America’s traditional allies in Europe, such as Britain and France, who were not informed of the strike in advance.

John Mearsheimer, professor of political science at the University of Chicago and a foreign policy expert, said he thought the decision to assassinate Soleimani was “remarkably foolish.”

It’s also likely to strengthen the position of Iranian hardliners who until recently had been facing massive protests because of continuing economic hardship and the use of Iran’s resources to fund militias across the region fighting proxy wars.

Jacqueline Saper, an Iranian-American author who witnessed the Iranian Revolution in 1979 and who fled to the U.S. in 1987, said that she initially couldn’t believe it when she heard Soleimani had been killed.

“When I heard that news I was shocked, alarmed, concerned and relieved all at once. At first I couldn’t believe that it was the General Soleimani. I thought it must be somebody else,” said Saper, author of “From Miniskirt to Hijab: A Girl in Revolutionary Iran.”

Saper said that she believes most Iranians want their lives to change but that Soleimani’s killing will bolster the existing regime.

“I believe the majority of the people want change – not necessarily regime change but more freedom and more democracy – but they have to show a different face in public,” she said.

Soleimani’s assassination will likely unite reformers and hardliners behind the existing regime, Saper said, and that while Iranians don’t want a suicidal war with the U.S., Iran will inevitably retaliate “because it will be embarrassed if it doesn’t.” 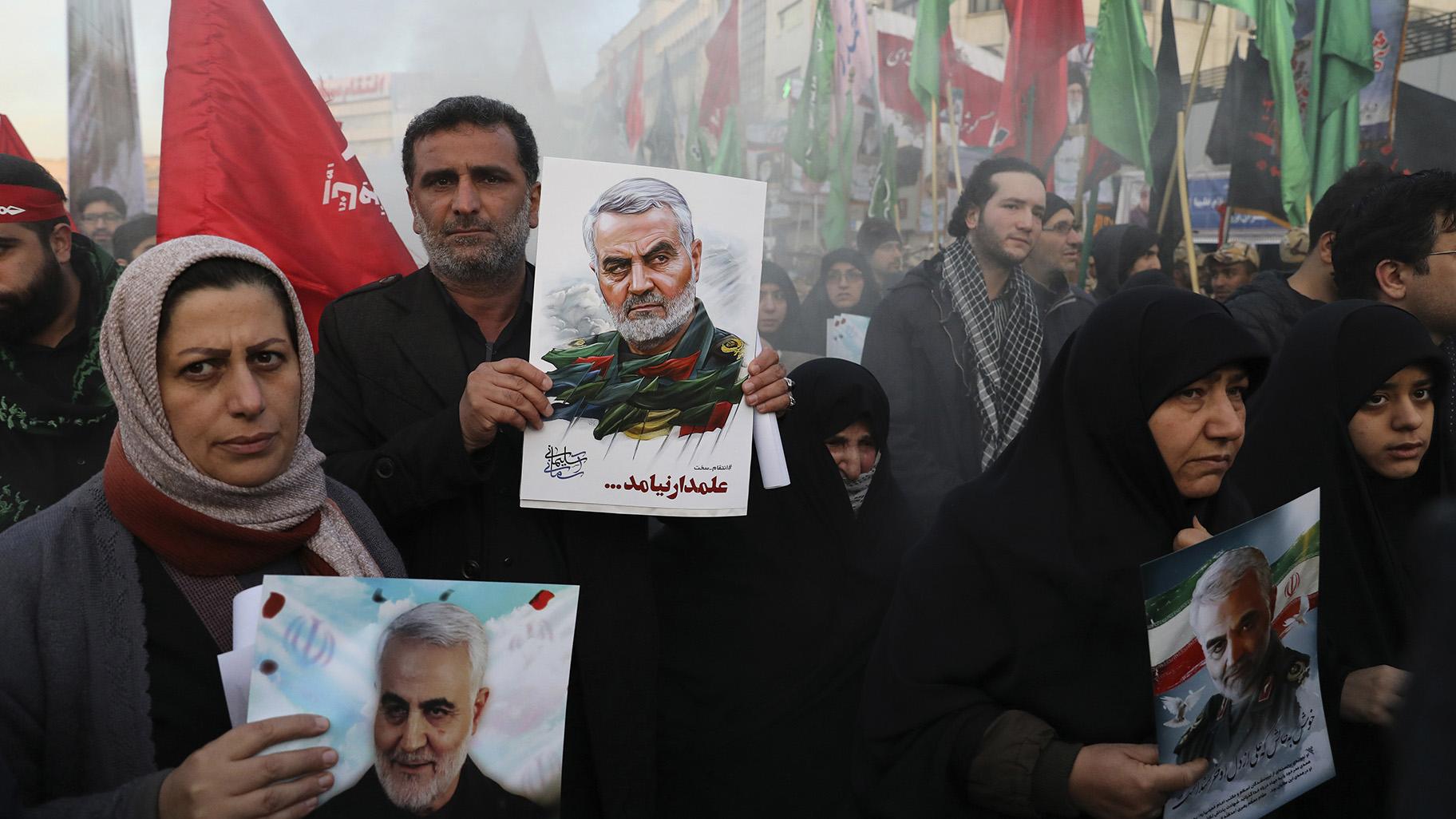 Mourners holding posters of Iranian Gen. Qassem Soleimani attend a funeral ceremony for him and his comrades, who were killed in Iraq in a U.S. drone strike on Friday, at the Enqelab-e-Eslami (Islamic Revolution) Square in Tehran, Iran, Monday, Jan. 6, 2020. (AP Photo / Ebrahim Noroozi)

“It is completely contrary to the foreign policy interests of the United States including those pursued explicitly by both candidate and President Trump,” said Daalder. “It reengages us into the Middle East and pulls us back in in a way that we have tried to counter – and Trump has tried to counter – for many, many years. Rather than focusing on the great power competition with Russia and China as the Trump administration said would be the foreign policy priority of this administration, we will now be back with more troops and more engagement in the Middle East.”

But while they may think the decision to kill Soleimani was foolish, both Mearsheimer and Daalder do not expect the situation will escalate into an all-out war with Iran.

Daalder predicts that Iran is likely to react in ways “that both hurt our strategic interests and is designed to minimize the possibility of the escalation to an all-out war between the United States and Iran, which the Iranians know they can’t win.”

Mearsheimer said he thinks there is “zero chance” that the United States will invade Iran.

“Even President Trump and his closest advisers, as foolish as they are, are not going to invade Iran. It would be a disastrous decision,” Mearsheimer said. “I think an air war against Iran is the most serious possible military outcome. What is more likely is that over time you will have a low-grade tit-for-tat (conflict) between Iran and its proxies on one side and the Americans on the other. And I think it will mainly take place in countries like Iraq, Syria and so forth.”

But Iran’s decision, in the wake of Soleimani’s assassination, to withdraw from the nuclear deal designed to prevent it from obtaining nuclear weapons could lead to future conflict.

“There is an escalatory dynamic between the U.S. and Iran that exists today that is very different to what it was a week ago,” said Daalder, who noted that Iran will now aggressively restart its nuclear program.

And if the Iranians do reach the point where they have enough enriched uranium to make a nuclear weapon, that could precipitate a conflict.

“Now that the diplomacy option appears to have disappeared, we could get into a war in that case quite apart from the Soleimani escalation,” said Daalder.