Gym Class Without the Gym? With Technology, It’s Catching On 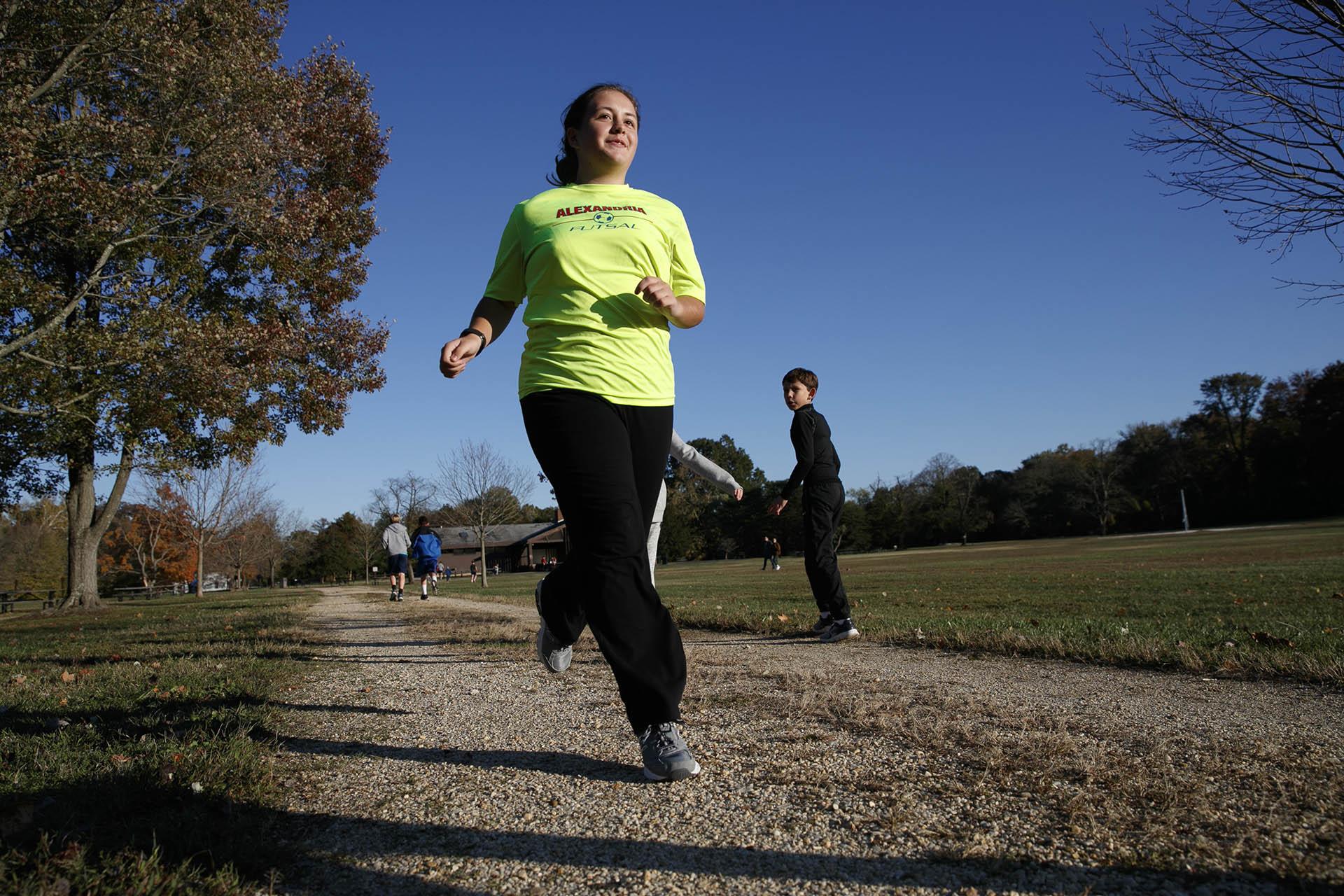 Grace Brown, 14, poses for a portrait while jogging at the park where she does her jogging workouts for her “online PE” class, in Alexandria, Virginia on Friday, Nov. 1, 2019. (AP Photo / Jacquelyn Martin)

Grace Brown’s schedule at West Potomac High School in northern Virginia is filled with all the usual academics, and she’s packed in Latin, chorus and piano as extras.

So she’s taking that one minus the gym, and on her own time.

The 14-year-old freshman is getting school credit for virtual physical education, a concept that, as strange as it may sound, is being helped along by availability of wearable fitness trackers.

For students whose tests and textbooks have migrated to screens, technology as gym equipment may have been only a matter of time.

Grace, who lives in Alexandria, wears a school-issued Fitbit on her wrist while getting in at least three 30-minute workouts a week outside of school hours. She has an app on her computer that screenshots her activity so she can turn it in for credit.

While online physical education classes have been around for well over a decade, often as part of virtual or online schools, the technology has made possible a new level of accountability, its users say.

“We’re asking kids to wear this while they do an activity of their choice, and they can change the activity as they desire, as long as it’s something that they understand is probably going to get their heart rate up,” said Elizabeth Edwards, department head for online physical education at Fairfax County Public Schools, which includes Grace’s high school.

Though a physical education instructor isn’t shouting from the sidelines, teachers do guide assignments by setting goals such as fat burn, cardio or peak, relying on the technology to be their eyes and ears. Students also are required to sign in for a weekly 60-minute to 90-minute classroom session with the teacher.

Teenagers who play soccer, swim or dance all year may satisfy the workout requirements without doing anything extra. Grace has been adding bike rides and jogs to her days.

For her, online PE freed her up to take three elective courses, instead of two in school. For others, it’s a welcome way to take a required class that students otherwise may find socially or physically challenging.

“We definitely exercise more in online PE,” Grace said. “There’s a lot of standing around in regular PE. Online, I do much harder workouts.”

A survey of more than 3,000 fitness professionals by the American College of Sports Medicine named wearable technology the top trend in fitness for 2020.

It’s not clear how many schools are embracing the trend. It comes with some cautions.

Technology and the collection of any student data always raises the specter of student privacy concerns. And some worry that students exercising on their own may miss out on important social concepts such as teamwork.

“There is a difference between physical activity and physical education,” said Chris Hersl, former vice president for programs and professional development at SHAPE America, which wrote national standards for K-12 physical education.

“Physical activity is great for the body. We want everybody to move,” he said, “but physical education is a class where students are taught how to move their body and the social context in which to do that.” 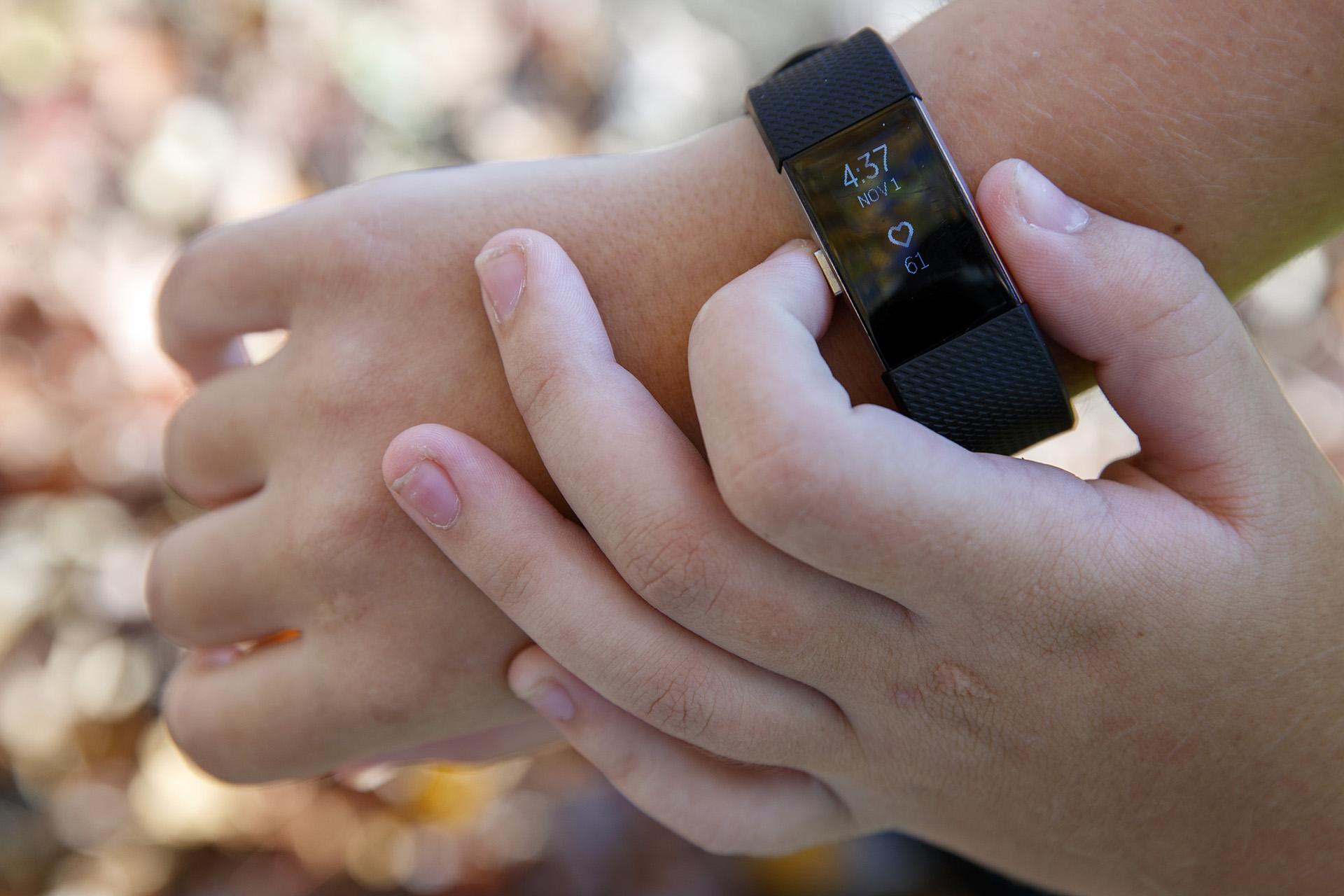 Grace Brown, 14, adjusts her fitness tracker at the park where she does her jogging workouts for her “online PE” class, in Alexandria, Virginia on Friday, Nov. 1, 2019. (AP Photo / Jacquelyn Martin)

Joliet Township schools in Illinois uses fitness trackers as part of a blended learning conditioning program that has students who sign up for it work out two to three times a week in the gym with an instructor and the other days on their own.

“It’s a flexible schedule where they still have in-person physical education classes and there’s still instruction happening, but they’re able to use the Fitbit to monitor how students are working outside the classroom,” said Karla Guseman, the district’s associate superintendent for educational services.

She said it’s one of numerous blending learning options that Joliet Township High School offers to give students both more control over the pace and time of their work, and more responsibility to get it done.

“We’re trying to give them an opportunity to see what post-secondary might look like,” Guseman said, “when you don’t meet every day but you’re still expected to do work for a course or preparation between class periods.”

A virtual school that is part of the Springfield, Missouri, public school district started with a single class -- physical education, said Nichole Lemmon, the creator of the program, called Launch, which uses Garmin fitness trackers.

“Eight years ago, it was the very first online class by our developers to meet a really niche student who could not fit PE courses into their schedule,” Lemmon said. “Maybe they wanted to take more honors level courses, or advanced placement, or international baccalaureate classes and PE was hard to fit in, so we allowed them to do it outside of the school day.”

A telling illustration of the technology-driven 24/7 school day is the peak log-in time on the school’s portal system: 10:03 p.m.

“They may not be working out at 10 p.m., but that’s when they’re turning in their workout. The notion that education now runs 7:30-4, 8-3, is really antiquated,” Lemmon said, “and our students are begging to be able to have more flexibility in the time of day they learn.”

During the past summer session, there were 22,600 students enrolled, and the most popular courses were PE, she said.

Teachers help students set up their fitness devices, entering the student’s height, weight and age, and coming up with a target heart rate. As an added layer of instruction and accountability, Launch students are required to send video back to the teacher, who checks their technique as they stretch or lift weights, for example.

“They work with their PE instructor to set a fitness goal and then they get their workout however they want to,” Lemmon said. “It really does promote lifelong fitness because it’s about working out the way they want to, not they’re required to do a particular activity in gym. ... We have a lot of kids -- a locker room is their worst nightmare. It’s not where they want to be.”

Grace’s mother, Rhonda Brown, remembers how hard gym class soccer and softball games were for her because of blindness in one eye.

“You’re talking to someone who was always picked last for every sporting activity. I have nightmares sometimes,” she said.

She’d like to see the county go even further and grant waivers from PE to kids that play school sports.

“We’re so stuck in the traditional classroom setting. These kids are burning 2,000 calories during a practice and more at every game.,” she said. “I wish the schools would catch up with the times.”