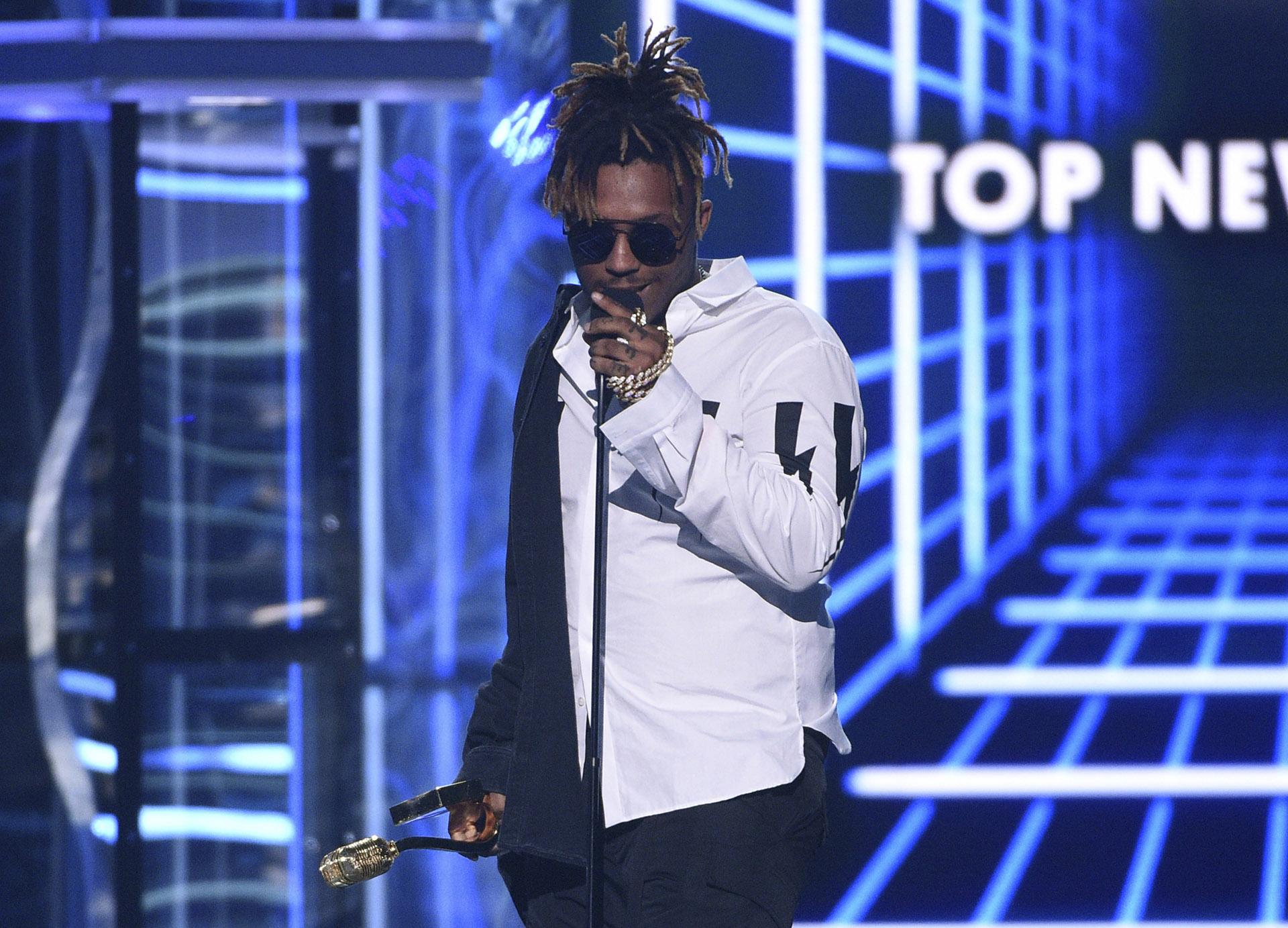 In this May 1, 2019 file photo, Juice WRLD accepts the award for top new artist at the Billboard Music Awards at the MGM Grand Garden Arena in Las Vegas. (Photo by Chris Pizzello / Invision/AP, File)

CHICAGO (AP) — Rapper Juice WRLD, who launched his career on SoundCloud before becoming a streaming juggernaut and rose to the top of the charts with the Sting-sampled hit “Lucid Dreams,” died early Sunday after a “medical emergency” at Chicago’s Midway International Airport.

The rapper, whose legal name was Jarad A. Higgins, was 21. Authorities have not released details about his cause of death.

He was pronounced dead at a hospital around 3:15 a.m. and taken to the Cook County medical examiner’s office several hours later, according to office spokeswoman Natalia Derevyanny, who said an autopsy would take place Monday.

Chicago police launched a death investigation after a 21-year-old male experiencing a “medical emergency” was transported from Midway to an area hospital. Police said there were no signs of foul play and those aboard the aircraft were cooperating with authorities. Chicago Fire Department spokesman Larry Langford said the man experienced cardiac arrest and was taken to a hospital from a hangar operated by Atlantic Aviation at Midway, away from the main terminal, where private planes land. Atlantic didn’t return a message Sunday.

The rapper, who was named top new artist at the 2019 Billboard Music Awards in May, lived in the Chicago suburb of Homewood where he stood out as a musician early on.

Juice WRLD turned 21 only days earlier. He was only two years out of high school.

Like a good number of young hip-hop performers, Juice WRLD blended rapping and singing on his songs, sometimes mumbling words and focusing more on melody. His hit “Lucid Dreams,” which heavily samples Sting’s 1993 song “Shape of My Heart,” was a six-times platinum success and reached No. 2 on the all-genre Hot 100 chart. It reached No. 1 on Billboard’s Hot R&B/Hip-Hop Songs and Hot Rap Songs charts.

“I was very impressed by what he put on top of (my version),” Sting told The Associated Press this year. “It’s a really good song.”

Juice WRLD got his start on the music sharing platform SoundCloud before signing to a record label and finding major success on streaming services. His major-label debut album, “Goodbye & Good Riddance,” was a platinum success. It featured the hit “All Girls Are the Same,” which gained platinum status, alongside seven more platinum hits including “Armed & Dangerous,” “Robbery,” “Fine China” and “Legends,” which features the lyrics: “What’s the 27 Club?/We ain’t making it past 21.”

He’s had 10 songs reach gold status and also had success with 2018’s “Wrld on Drugs,” a collaborative album with rapper-singer-producer Future.

His second album, “Death Race for Love,” debuted on top of the Billboard charts this year and his most recent single, “Bandit” with YoungBoy Never Broke Again, reached the Top 10 of the pop charts in October.

Juice WRLD graduated in 2017 from Homewood-Flossmoor Community High School outside Chicago, where he gained a reputation as a talented musician among the nearly 3,000 students. School officials said Sunday that they would offer counseling services for students affected by his death.

“He is remembered by his teachers and staff as being a brilliant and creative student. Jarad was extraordinarily talented in music and played many instruments,” said school spokeswoman Jodi Bryant. “He was a caring and outgoing person who always tried to reach out to others while at the same time he was introspective and had a great sense of humor.”