Dan Hooper spends his time contemplating the biggest mystery of all: how the universe came to be.

Hooper is a senior scientist at the Fermi National Accelerator Laboratory about 40 miles west of Chicago and a professor of astronomy and astrophysics at the University of Chicago.

He says that modern cosmology has been incredibly successful at explaining the expansion and evolution of the universe from just fractions of a second after the Big Bang – but fundamental puzzles remain.

Hooper argues in his new book “At the Edge of Time: Exploring the Mysteries of our Universe’s First Seconds” that there are four big fundamental puzzles stumping cosmologists right now. The biggest of these are the twin mysteries of dark matter and dark energy, which have never been directly observed but are thought to make up 95% of all matter and energy in the universe.

Dark energy is even more mysterious but it could help explain one of the biggest mysteries of modern cosmology: the accelerating expansion of the universe.

“What we really do know for sure is that our universe is expanding faster today than it was in the past. And that’s something we can’t explain using Einstein’s Theory of Relativity if the universe was full of only things like ordinary matter, or light,” said Hooper. “To make a universe or a piece of space to grow faster as time progresses you really need something else, a form of energy that occupies space and doesn’t get diluted as space expands.”

And that is what scientist believe to be dark energy.

“Finding out that the universe is going faster over time is just as surprising as you throwing up a baseball and you watching it rocket off and speeding up away from the Earth,” said Hooper. “That requires some extra thing to be pushing that baseball upward. And in the case of our universe it requires some extra thing, namely dark energy, whatever that is, to make our universe grow faster.”

“There are things that we see about our universe that we can only explain – at least for the moment – if we postulate that there was an era very, very early in our universe’s history where space expanded extremely dramatically in a giant, sudden burst,” said Hooper. “These are bigger numbers than you can ever wrap your head around but you can just think of the universe growing almost instantly to a vast, vast volume from a tiny little space. If that’s true, and a lot of cosmologists think it is very likely to be true, then the Big Bang didn’t just happen once, but this inflating space in a sense pops off these kind of bubble universes one after the other.”

Below, an excerpt from “At the Edge of Time: Exploring the Mysteries of our Universe’s First Seconds.”

Is a Revolution Coming in Cosmology? 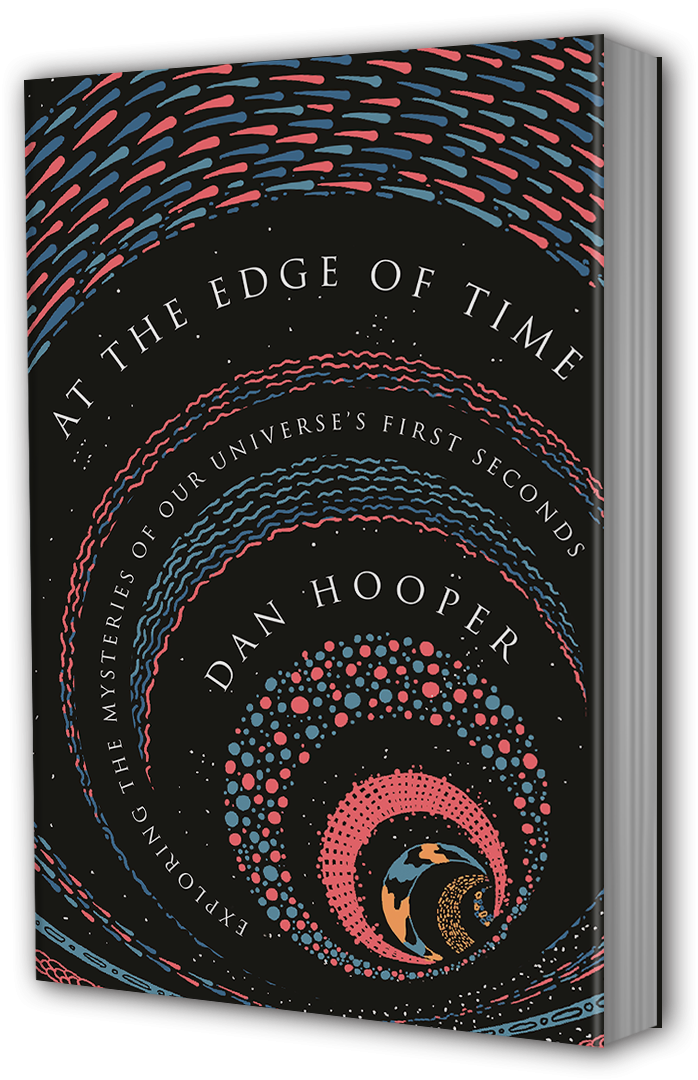 When I ponder the state of cosmology today, I find myself alternating between two very different points of view. On the one hand, I see an incredibly successful scientific endeavor. Observations of our universe have made it clear that space has been expanding over billions of years, originating in the hot and dense state that we call the Big Bang. Over the past decades, this theory has been scrutinized and refined as new kinds of precision measurements enabled us to reconstruct the history of our universe in ever greater detail. And when we compare the results of different kinds of measurements—the expansion rate of our universe, the temperature patterns in the cosmic microwave background, the abundances of the various chemical elements, and the distribution of galaxies and other large‐scale structures—we find stunning agreement. Each of these lines of evidence supports the conclusion that our universe expanded and evolved in just the way that the Big Bang Theory predicted. From this perspective, our universe appears to be remarkably comprehensible.

On the other hand, one doesn’t have to look very far to find ways in which cosmologists have struggled—if not outright failed—to understand important facets of our universe. We know almost nothing about the dark matter and dark energy that together make up more than 95 percent of the total energy in existence today. We can only speculate about how the atoms that inhabit our world somehow managed to survive the heat of the early universe or how the era of cosmic inflation may have played out. And although each of these mysteries is fascinating in its own right, what really intrigues me is that each of them seems to point us toward the first moments that followed the Big Bang. In this sense, our inability to detect particles of dark matter, as well as the simple fact that atoms exist in our world today, suggests that the earliest moments of our universe’s history may have included events, interactions, or forms of matter and energy that we still know nothing about. Cosmic inflation also took place during these earliest of times, raising far more questions than we currently have answers. These are our universe’s greatest mysteries, and all indications are that their solutions lie in the first fraction of a second that followed the Big Bang.

Some scientists continue to view these puzzles as little more than loose ends, which they expect to be resolved through further investigation and scrutiny. But so far, these problems have proven to be remarkably stubborn and persistent. We designed and built the experiments that we thought would be required to detect the particles that make up the dark matter, and yet we found nothing. Nor has the LHC revealed anything that moves us closer to resolving any of these cosmic mysteries. Despite having measured the expansion history and large‐scale structure of our universe in ever‐increasing detail, we have not gained any substantively greater understanding of the nature of dark energy.

It is from this perspective that I find myself asking whether these cosmic mysteries might be the symptoms of something more important or expansive than a few loose ends. Perhaps these puzzles are not as unrelated as they might seem, but are instead each pointing us to a very different picture of our universe’s earliest moments. When it comes to our understanding of our universe’s origin, I sometimes find myself wondering: Is a revolution coming?

Scientific revolutions are often unexpected and go initially unnoticed by all but a few. Consider, for example, what it might have felt like in 1904. Never before had physics seemed to be on such solid footing. For over two centuries, physicists had been successfully applying Isaac Newton’s laws of motion and gravity to problem after problem. And although progress made in the nineteenth century expanded our knowledge into areas such as electricity, magnetism, and heat, these newly understood aspects of our world were, in more ways than not, not so different from those Newton had described hundreds of years earlier. To the physicists of 1904, the world seemed very well understood. There was little reason to expect that a revolution was coming.

Similar to the situation faced by cosmologists today, however, there were a few problems in 1904 that physicists hadn’t yet been able to address. The speed of light had been measured and found to be unexpectedly uniform—light always moves through space at the same speed, regardless of direction or time. Physicists had long thought that light traveled through space by distorting a medium, which they called the luminiferous aether. But the uniformity of light’s speed and the lack of any direct evidence for this substance had begun to present challenges to this notion. It was hard for physicists to understand why they had failed to detect the effects of the aether, but without it they had no cogent way of understanding the nature of light.

Physicists around this time were also confounded by the observed motion of the planet Mercury. For decades, astronomers had been aware that Mercury’s orbit was slightly different from what was predicted by Newton’s equations. Some even went as far as to suggest that an unknown planet, called Vulcan, might be perturbing Mercury’s trajectory. But despite considerable effort, this so‐called Vulcan had never been seen.

Perhaps the most conspicuous problem faced by physicists in 1904 was that they had no idea what powered the Sun. No known chemical or mechanical process could possibly generate enough energy to create so much sunlight for so long. As far as they were concerned, the Sun should have stopped shining a long time ago.

And lastly, to the physicists of 1904, the inner workings of the atom remained a total and utter mystery. Various chemical elements were known to emit and absorb light with specific spectral features, but physicists had no idea why. Even the very stability of atoms was difficult to understand from the perspective of Newtonian physics.

Few saw it coming, but in hindsight it’s easy to recognize that these problems were heralds of a coming revolution in physics. And in 1905 a revolution did indeed come, ushered in by a young Albert Einstein and his new theory of relativity. We now know that the luminiferous aether does not exist and that there is no planet Vulcan. Instead, these fictions were symptoms of the underlying failure of Newtonian physics. Relativity beautifully solved and explained each of these mysteries, without any need for new planets or substances. Furthermore, when relativity was combined with the new theory of quantum physics, it became possible to explain the Sun’s longevity, as well as the inner workings of atoms. These new theories even opened doors to new and previously unimagined lines of inquiry, including that of cosmology itself.

Scientific revolutions can profoundly transform how we see and understand our world. But radical change is never easy to see coming. There is probably no way to tell whether the mysteries faced by cosmologists today are the signs of a coming scientific revolution or merely the last few loose ends of an incredibly successful scientific endeavor. There is no question that we have made incredible progress in understanding our universe, its history, and its origin. But it is also undeniable that we are profoundly puzzled, especially when it comes to the first fraction of a second that followed the Big Bang. I have no doubt that these earliest moments hold incredible secrets, but our universe holds its secrets closely. It is up to us to coax those secrets from its grip, transforming them from mystery into discovery.

Adapted from Dan Hooper’s At the Edge of Time: Exploring the Mysteries of Our Universe’s First Seconds
© 2019 Princeton University Press
1271 words