For decades, the concept of journalistic objectivity has been a central value of the mainstream news media.

But does objectivity actually exist? And if so, who and what does its pursuit serve?

Those are some of the questions explored in “The View from Somewhere: Undoing the Myth of Journalistic Objectivity,” a new book by journalist Lewis Raven Wallace.

From the impact of the Black Lives Matter movement to the history of public media in the United States, “The View from Somewhere” investigates the rise and practice of objectivity while interspersing stories of Wallace’s experiences as a transgender journalist.

While objectivity today may be taken for granted, Wallace says it wasn’t written into official journalism codes until the 1920s and ‘30s. He argues the concept arose as newspapers were transitioning from being backed by partisan political groups to more modern advertising models.

“In order to appeal to more people, they began to present themselves as more neutral,” Wallace said.

That neutrality, he argues, has often come at the expense of people typically underrepresented in media and in the newsrooms that make it.

“This idea of objectivity has developed in a way that has often been weaponized against marginalized people, oppressed people, and people with outsider perspectives,” Wallace said.

There are some facets of objectivity that Wallace still advocates for, like fairness and rigor in reporting.

But when it comes to nuanced coverage of people outside of the mainstream status quo – like communities of color and LGBTQ communities – Wallace says notions of objectivity and impartiality have often failed.

“This idea that there was a neutral format for reporting on transgender people has never been real, and it has actually taken activism and advocacy in order to make the coverage of trans communities better,” he said.

Below, an excerpt from “The View from Somewhere.” 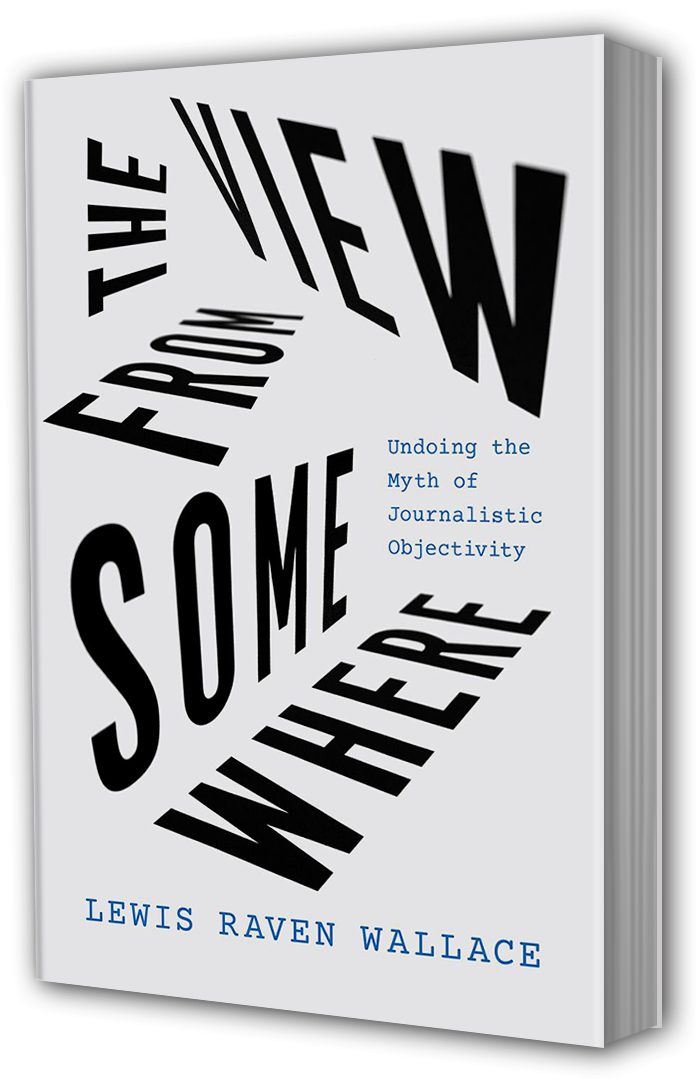 “Objectivity”—and the matter of what a person’s objective, true gender or sex actually is—courses through all of these categorizations and debates. The general belief has been that trans people must be studied, “proven,” before we can be validated or helped. As trans activist and psychotherapist Patrick Califia wrote in 1998, “To be differently-gendered is to live within a discourse where other people are always investigating you, describing you, and speaking for you; and putting as much distance as possible between the expert speaker and the deviant and therefore deficient subject.” Like Silence in the medieval roman, trans and gender-variant people have been subjects; others look at us objectively. That was the paradigm into which I came out as trans in the late 1990s.

It’s only in these last two decades that the word “transgender” has come into popular use, and transgender identities are evolving rap- idly—in the mid-1990s, female-to-male and male-to-female transsexuals were still broadly assumed to be the only kinds of transgender people. My discovery of my trans identity coincided with a massive expansion of possibility—trans, genderqueer, gender nonconforming, nonbinary, agender, Two Spirit, and many other categories were birthed or rebirthed in the United States. By the time you’re reading this, it’s nearly guaranteed that new words will have been coined, new identities spawned. Many young trans activists today reject the medical terminology of “transsexual” altogether. When I was a teenager, my friends and I advocated for the use of “ze” and “hir” as gender-neutral pronouns. These days, “they” and “them” as singular, gender-neutral pronouns are in use everywhere from classrooms to NPR and the New York Times Magazine.

Much of this social change has been driven by media, although not always the news media: transgender culture in the 1990s depended on a robust network of ’zine writers, self-publishers, musicians, and word-of-mouth storytellers to spread ideas. I was an active part of creating and sustaining this culture, writing ’zines about gender identity as early as 1998. I met some of my longest-term friends and collaborators through this underground media, where we carried out debates that were many years from appearing in mainstream papers or TV news.

I remember clearly the first time I saw a mainstream media representation of a trans person who seemed at least somewhat like me. It was in the movie Boys Don’t Cry, a 1999 release that told the story of the 1993 murder of a young transgender man named Brandon Teena.

The movie was inspired by a long report in the Village Voice about Teena and his two friends who were also killed—but the story, written by cisgender lesbian journalist Donna Minkowitz, led to criticism and protest from trans advocates because it referred to Brandon as “she” and assumed that he was a lesbian living out a male fantasy due to childhood trauma. Minkowitz believed she was doing a fair story about the murder; transgender activists saw her take as offensively off-base, so much so that they showed up at the offices of the Village Voice to confront her. Such has been the relationship between trans activists and news media for much of the intervening period.

In 2018 someone forwarded me a long piece in the Village Voice in which Minkowitz apologized for the ignorance that led to her original take on Brandon Teena. She had fretted about it for years. Over time, she’d realized that her view of Brandon was not his own view—and that was a problem. Trans activists contended that because he lived as male and went by male pronouns, Brandon Teena was a man. He died for his choice to live as male. In retrospect, Minkowitz figures the least she could have done is respect this choice. Her searing self- critique ends with this: “All stories are partial, but the deaths go on in their fullness.”

These problems of “objectivity” and choice, and of the partialness of every story, show up again and again in the battles over trans representation. Put simply, there is no “objective” criteria for reporting on trans people. For example, if someone’s legal name or gender differs from the name or pronouns they use, an “objective” take could mean giving their legal name, or it could mean giving the name and gender of their preference. It could mean both. Some will argue that trans people are in fact “objectively” who we say we are—a useful argument, say, if you are talking to a journalist who prides themselves on their “objectivity.” But I think our response to trans identities is a value judgment for journalists, not an “objective” one based on agreed criteria available in the observable world. In short, objectivity isn’t the right frame for talking about trans folks—not because it arrives at “wrong” conclusions, but because gender is subjective and ever-changing. It can’t be proven, but it still seems to exist. For trans people, our view of our own bodies and lives, our view from somewhere, is precisely the thing we need to be respected. We could try to establish ourselves as “objective,” as I did when I got my GID diagnosis, but it invariably leads to more gatekeeping. Subjectivity isn’t the problem here—it’s the answer to the problem.

Apology from Northwestern’s Student Newspaper Makes Headlines of its Own