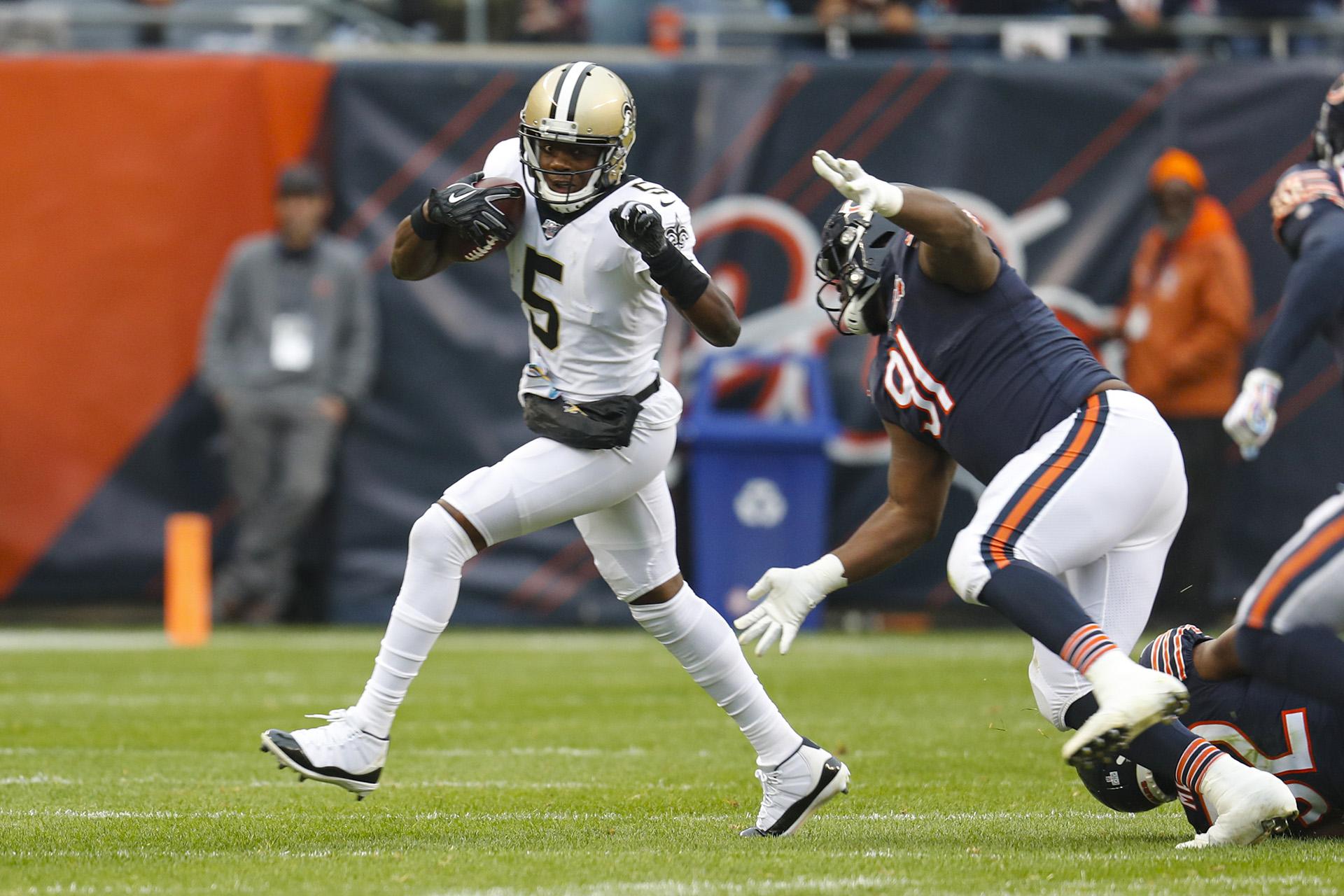 CHICAGO (AP) — The New Orleans Saints insisted they were ready for the challenge once Drew Brees went down. All they’ve done since is back up their words with wins.

Teddy Bridgewater threw for 281 yards and two touchdowns, and the Saints improved to 5-0 without their injured star quarterback by beating the Chicago Bears 36-25 on Sunday.

The Saints (6-1) again showed why they still see themselves as Super Bowl contenders even though their star quarterback is out indefinitely because of a torn ligament in his right thumb.

Bridgewater completed 23 of 38 passes, Michael Thomas had nine receptions for 131 yards, and Latavius Murray ran for 119 yards and two touchdowns.

“I think Teddy’s just playing the way he knows how to play,” Murray said. “I don’t think he’s trying to replace Drew. He’s just come in and been himself. That’s all you can ask because Teddy’s had success before. This is nothing new to him. He’s been a successful quarterback at this level. He’s done a heck of a job, obviously, and he’s been undefeated."

Besides Brees, New Orleans had to get by without top running back Alvin Kamara (ankle, knee) and top receiving tight end Jared Cook (ankle). Both players were ruled out Friday, but that didn’t stop the NFC South leaders from taking down the Monsters of the Midway.

“You look at us overall — offensively, defensively, the kicking game — we’re playing elite football right now,” Bridgewater said. “Of course, it’s not as pretty as we’d like it to be. But it’s working for us.”

The Bears (3-3) lost their second straight, with Mitchell Trubisky struggling after missing a game because of a shoulder injury.

They were hoping their prized quarterback would build on a solid showing in Week 3 against Washington, when he threw for three touchdowns. Instead, he was erratic, made poor decisions and heard it from the crowd.

Trubisky finished 34 of 54 with 251 yards and two late touchdowns in his first appearance since he was hurt early against Minnesota on Sept. 29. He said his shoulder was fine, but the offense sure is not.

The run game was once again an afterthought, with Chicago setting a franchise low with seven carries. And the 17 yards rushing were by far the fewest this season.

“We just have no rhythm,” Trubisky said. “It’s not about pointing fingers. We’re struggling as an offense.”

About all the fans had to cheer for was a 102-yard kickoff return by Cordarrelle Patterson in the first quarter that matched the second-longest in franchise history.

But after losing at Oakland in London two weeks ago, it was another rough outing for the Bears. They gave up a season-high 424 yards while being held to 252 and managed just four first downs through the first three quarters. It added up to their fifth straight loss to the Saints, and a 1-2 record at Soldier Field this season.

With a 12-10 halftime lead, the Saints drove 75 yards for a touchdown on the opening drive of the third quarter. A wide open Ted Ginn Jr. hauled in a 45-yard pass and Murray ran it in from the 3 on the next play.

New Orleans then wasted a big opportunity after Chicago’s David Montgomery lost a fumble on the next drive. The Saints took over at the Bears 29, only to have Wil Lutz come up short on a 52-yard field goal — his second miss of the day after he made 13 of 14 in the first six games.

But Taysom Hill caught a 4-yard touchdown with just under three minutes remaining in the third to make it 26-10. And the Saints stayed in control the rest of the way.

“I’ll fill you guys in day by day,” he said. “We’re not targeting. We’ll see how he’s doing. We’ll give you the news when we feel like we’re ready to.”

Patterson’s kickoff return for a touchdown was the seventh of his career, tied for third in NFL history behind only Josh Cribbs and Leon Washington, who each had eight.

He’s the first player to have a kick return for a score at Soldier Field since he did it in Week 7 of last season while with New England. Patterson has three career kick return TDs at the Bears’ home, breaking a tie with former Chicago stars Devin Hester and Dennis Gentry for the most all-time since the team moved to the stadium in 1971.

Saints: CB Eli Apple came up clutching his right knee after his leg buckled trying to defend Javon Wims on a touchdown catch near the end of the game. He said his foot got stuck in the grass and there was “just an awkward feeling.” Apple didn’t want to talk about any tests. And Payton did not have an update. ... CB Patrick Robinson hurt a hamstring in the first half.

Bears: S Sherrick McManis (concussion protocol) left early in the third quarter. He was hurt blocking on a kickoff return.