The Chicago Bears (3-2) hope to bounce back when they return from their bye week and face the New Orleans Saints (5-1) at Soldier Field on Sunday. The Bears could get a boost if starting quarterback Mitchell Trubisky is able to return.

Trubisky sat out the Bears 24-21 loss to the Oakland Raiders in London on Oct. 6 after injuring his left shoulder the week prior against the Minnesota Vikings. Backup Bears’ quarterback Chase Daniel made his first start of the season on Oct. 6 in Trubisky’s absence. Daniel finished the game with 231 yards, two touchdowns and two interceptions.

On Thursday, Bears head coach Matt Nagy told reporters Trubisky’s feeling good. “He had a good practice yesterday,” Nagy said. “I like where he’s at so it’ll be good to see how the rest of the week goes for where he’s at for Sunday.”

Even if Trubisky returns, the Bears’ offense will have their hands full with a Saints defense ranked 10th in the league in total yards allowed.

“They’re able to fly around,” Nagy said of the Saints defense. “They move around quick. They play in their gaps. They’re playing at a high speed right now. And they have good players so that’s a huge part of it.”

The Bears offense has struggled this season, averaging only 17.4 points a game (27th in NFL). The Bears’ offense averages 266 yards a game (30 in the NFL), only ranking ahead of the fledgling Miami Dolphins and New York Jets.

The Bears’ offense will have to look for ways to improve without their veteran offensive lineman Kyle Long, who the team has placed on season-ending injured reserve with a hip injury.

The Bears’ defense has also been hit with a key injury. Defensive lineman Akiem Hicks was placed on injured reserve with an elbow injury he sustained in the loss to the Raiders. However, Hicks may be able to return this season.

Every NFL team can bring back two players to rejoin their rosters after spending at least eight weeks on injured reserve. If the team chooses to bring back Hicks, the first game he’d be available to play is in the team’s week 15 matchup against the Green Bay Packers.

The Bears’ defense will have to find a way to slow down the Saints’ offense that’s rolling with backup quarterback Teddy Bridgewater under center. Bridgewater is a familiar face to the Bears: he was drafted by the Vikings in 2014 and played three seasons for them.

Saints’ starting quarterback Drew Brees injured his right thumb in week two and has been out since after undergoing surgery.

“You have a Hall of Fame quarterback in Drew Brees that is with a really, really good coach, and now they lose that guy. And now the next guy comes in and I think it just it shows to who Coach Payton is as a coach and who Teddy Bridgewater is as a player. I mean his teammates are rallying around him,” Nagy said.

The game will be a reunion for Saints head coach Sean Payton who played for the Bears briefly in 1987. The former quarterback at Naperville Central High School and Eastern Illinois University appeared in three games for the Bears, throwing for 79 yards, zero touchdowns and one interception.

The Bears can only hope Sunday’s matchup doesn’t come down to divine intervention. Last Sunday, Pope Francis tweeted using the #Saints hashtag, which Twitter associates with the NFL team and added the iconic fleur-de-lis symbol. 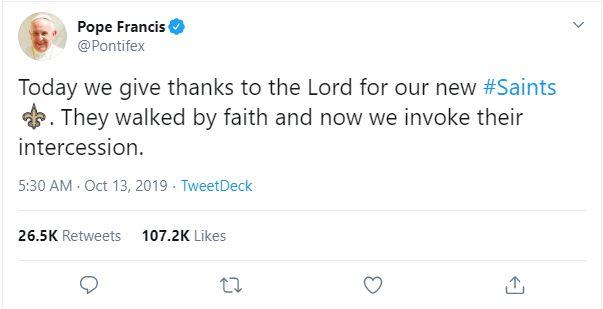 Former Bears offensive lineman and WTTW News football analyst James “Big Cat” Williams gives us three key takes on what the Bears need to do to beat the Raiders.

Coach Nagy is going to need a good offensive game plan if Trubisky is going to be the starter this week. Saints defensive coordinator Dennis Allen is more than likely going to try and get bodies around Trubisky early and often just to see if that off throwing shoulder is really ready for full contact. Trubisky has not had any contact since injuring it against the Vikings.

The Bears must get their running game going. With Long being put on injured reserve the offensive line will have to do a better job of communicating with each other. If the run game doesn't look great at the beginning of the game, they must stick with it and it should help them get more out of the passing game versus a stingy Saints defense.

The defense must get back to their dominant ways. The loss of Hicks for the next eight weeks or more will hurt, but against the Vikings they showed they have some depth across their defensive line. Players like defensive tackle Abdullah Anderson, defensive lineman Jonathan Harris, and defensive tackle Nick Williams are going to need to step up.