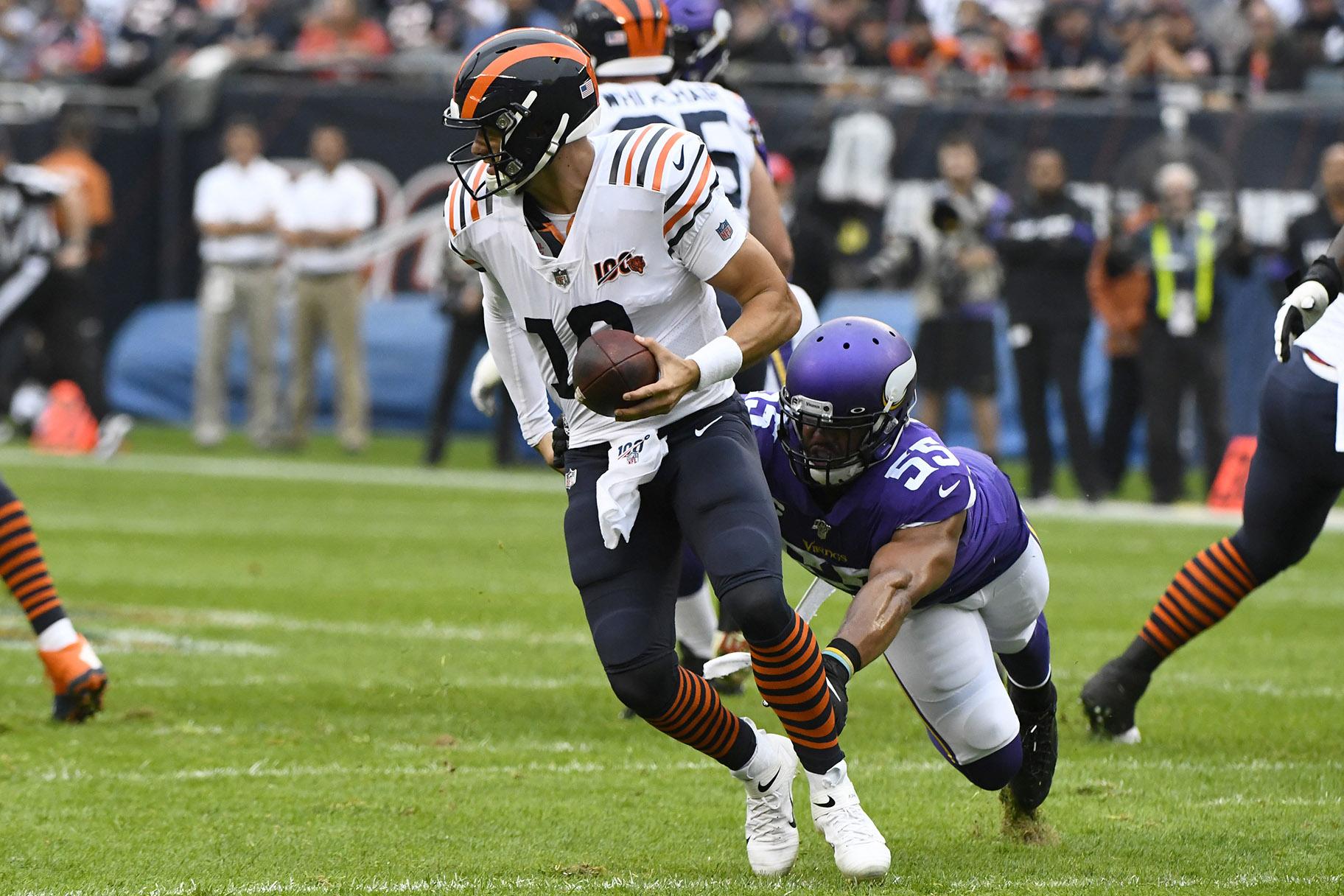 Chicago Bears quarterback Mitchell Trubisky (10) scrambles away from Minnesota Vikings outside linebacker Anthony Barr (55) during the half of an NFL football game Sunday, Sept. 29, 2019, in Chicago. (AP Photo / Matt Marton)

Behind a strong effort from the defense, the Chicago Bears beat the Minnesota Vikings 16 to 6 at Soldier Field in Chicago on Sunday. The win leaves the Bears with a 3 and 1 record heading into Sunday’s game against the Oakland Raiders in London, England.

But only four weeks into the regular season, the Bears are among a number of teams having a rough time keeping their quarterbacks healthy.

Bears quarterback Mitchell Trubisky left the game against Minnesota because of a left shoulder injury. A scrambling Trubisky was hurt on the opening possession. Danielle Hunter dragged him down and the quarterback’s arm got pinned awkwardly under his body as the ball popped out. Minnesota recovered the fumble, but a holding penalty against Anthony Harris negated the play. Bears head coach Matt Nagy did not give details about Trubisky after the game but said he doesn’t think it will be a season-ending injury. Trubisky is expected to undergo tests early this week to determine the severity of the issue.

Quaterback injuries are piling up around the league. Also Sunday, Bills quarterback Josh Allen was placed in the NFL’s concussion protocol after taking a helmet-to-helmet hit by Patriots defensive back Jonathan Jones in the opening minute of the fourth quarter of a 16-10 loss to New England.

The hit occurred when Allen scrambled out of the pocket and burst through a hole up the middle while facing third-and-8 at the New England 45. He gained 7 yards before Jones closed in on him, lowered his helmet and struck the quarterback in the crown of his helmet. Jones was flagged for a personal foul for unnecessary roughness.

Allen lay on the field for several minutes before hopping up on his own. He was briefly evaluated on the sideline before being escorted up the tunnel. Allen was spotted in the locker room chatting with teammates following the game.

In other injury news:

Chargers defensive end Melvin Ingram left in the first quarter at Miami with a hamstring injury.

Lions tight end T.J. Hockenson (concussion) was carted off the field in the third quarter against Kansas City. Chiefs defensive end Alex Okafor (hip) and LB Damien Wilson (concussion) left in the fourth quarter of the win at Detroit.

Falcons right guard Jamon Brown suffered a concussion in the first quarter and did not return against Tennessee. The line suffered another loss when center Alex Mack left with a left elbow injury in the third quarter. He returned later in the quarter with the elbow heavily wrapped.

Houston wide receiver Kenny Stills injured his hamstring on the last play of the first quarter against Carolina and didn’t return. Panthers tight end Chris Manhertz sustained a concussion early in the second half.

Giants linebacker Ryan Connelly was carted off in the fourth quarter with an injury to his right knee and Lorenzo Carter, who was bothered by an elbow injury earlier in the week, sustained a neck injury in the second half.

Cardinals defensive end Zach Allen (shoulder) hurt his shoulder in the second quarter and didn’t return against Seattle and linebacker Dennis Gardeck (ankle) left early in the fourth quarter. Cardinals wide receiver Christian Kirk limped off the field on the game’s next-to-last play. He appeared to get his right ankle/leg caught underneath a tackler.

Broncos linebacker Josey Jewell aggravated a hamstring injury in the second quarter and was done for the day against Jacksonville.

Tampa Bay wide receiver Breshad Perriman didn’t return from a hamstring injury in the first quarter against the Rams.

Rams linebacker Bryce Hager injured his shoulder during the first half and rookie safety Taylor Rapp left the field in the third quarter unable to put weight on his left ankle.