On the second day of the Chicago Teachers Union and SEIU Local 73 strike, teachers outside Senn High School in the city’s Edgewater neighborhood played music, sang songs and chanted as car horns blared from motorists showing support for the striking workers.

“I actually feel like today we’re even more energized than we were yesterday,” said Jennifer Hessenthaler, an English teacher at Senn.

David Kaplan from Von Steuben High School in Albany Park agreed that his picket line was even more invigorated Friday than it was the day before.

“I think we got our second wind,” he said while wrapping up Friday morning’s picketing. “In 2012, we were strong, but it was new to us.”

But whether the wind is blowing in the union’s favor is anyone’s guess.

Chicago Public Schools canceled classes again Friday, as there is still no deal between the unions and the city. 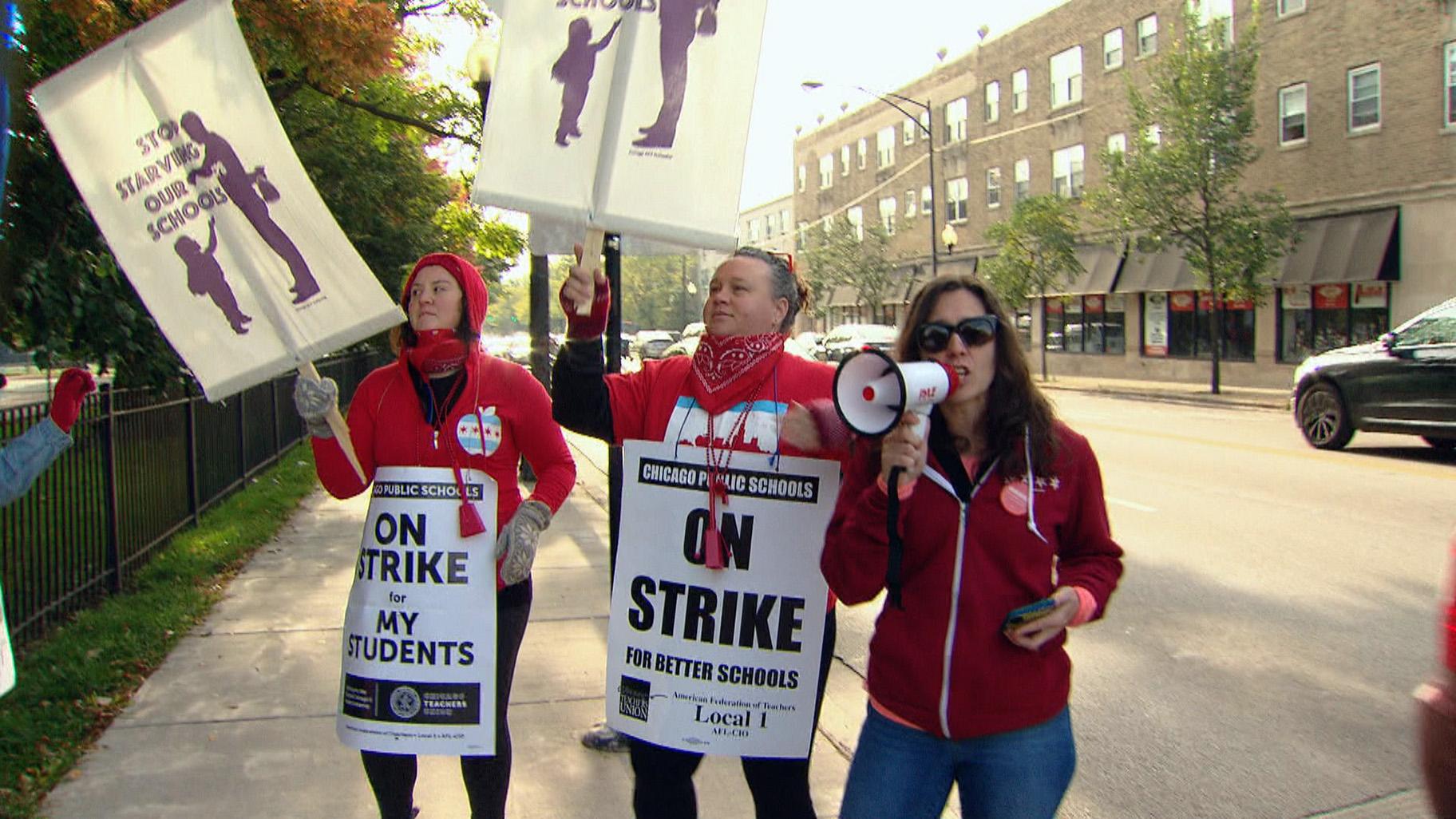 Teachers rallied Friday outside of Chicago schools and downtown as their strike continued for a second day.

Union leadership and the district continue to spar over whose court the proverbial ball is in.

“If you’d asked me two weeks ago, I would’ve said we wouldn’t have even been at this point,” said Kaplan, “because I’m just optimistic by nature, and we’ve learned lessons from the past.”

Just next door to Von Steuben is the Albany Park Community Center, which is providing childcare to 80 CPS students.

“We started thinking about this a couple of weeks ago and started surveying our parents and families, saying ‘What are you going to do if there’s a strike?’” said center director Christy Beighe-Byrne.

She said the center is treating the situation like summer day camp, facilitating trips to the park, crafts and other activities.

“Our kids are busy,” she said. “They made scarecrows yesterday, they made slime. Lots of gooey hands.”

Meanwhile, the union has been holding a daily afternoon rally downtown to raise more awareness of its cause.

But such demonstrations have the city complaining that they are taking union leadership away from the bargaining table.

In a letter sent Friday, the city’s chief negotiator, Jim Franczek, is asking CTU President Jesse Sharkey to commit to a minimum of 10 hours per day in negotiating sessions until the contract is resolved.

So when Franczek sends us this note, it's like c'mon son...our team has been at this for 10 months, spending more than half of those months in classrooms *and* at the table. His boss didn't start her job until May, and didn't get (somewhat) serious about schools until July. pic.twitter.com/97ZnW67sTp

In response, the union tweeted, “our team has been at this for 10 months, spending more than half of those months in classrooms *and* at the table. His boss didn't start her job until May, and didn't get (somewhat) serious about schools until July.”

City sources say leadership is concerned that the strike will last well into the next week.

“The teachers are not going to back down,” Hessenthaler said. “This is about class sizes and about the supports that our students deserve. And I think so many people fail to realize just how much power a school can have in a child’s life.”