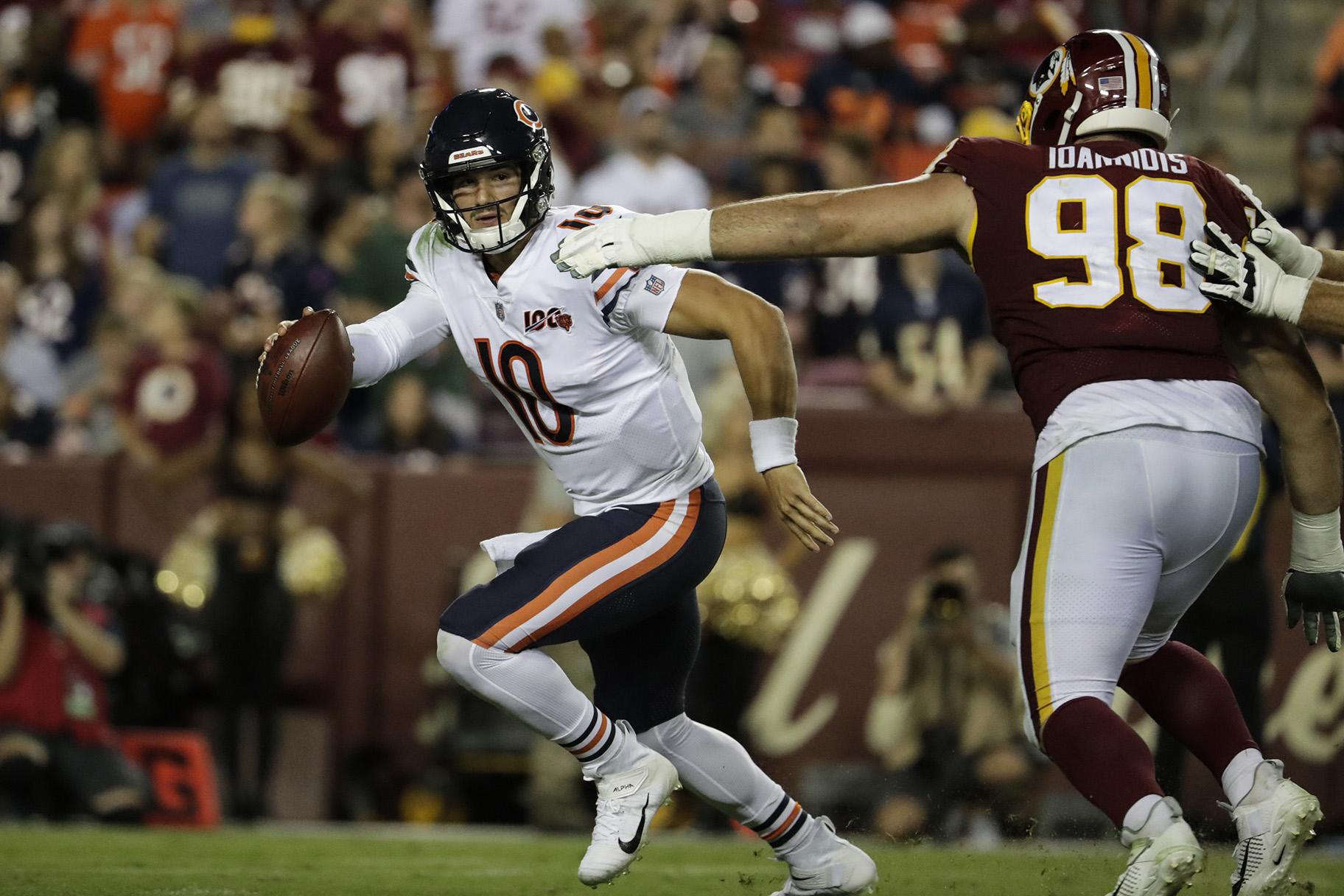 LANDOVER, Md. (AP) — After the Chicago Bears’ offense was slow to get going this season, Mitchell Trubisky was excited to speed things up.

Trubisky and the Bears used a no-huddle, hurry-up tempo to snap out of their offensive funk and score 28 first-half points on the way to beating the Washington Redskins 31-15 Monday night. After no passing touchdowns the first two games of the year, Trubisky connected with Taylor Gabriel on three of them in the second quarter alone.

The 2017 second overall pick looked at ease with a fast-paced approach and picked apart Washington’s porous defense on 25 of 31 passing for 231 yards. It was the offensive explosion Trubisky predicted would happen this week.

“It just felt like the tempo helped us out a little bit,” Trubisky said. “If everyone just continues to stick together and execute our plays and believe and just go out there and make plays, it’ll be a fun offense.”

Chicago (2-1) had just a 1-yard touchdown run to show for its first two games, and Trubisky entered the night with a completion percentage of 58.3 and ranked near the bottom of the league in yards per attempt. Facing the Redskins (0-3) brought out some of the best in Trubisky.

“Hat’s off to him,” said Washington linebacker Cole Holcomb, who was roommates with Trubisky at North Carolina. “I always knew he was a good quarterback. He struggled a little bit, but he came out and he played a good game.”

Trubisky had 173 yards in the first half alone before throwing an interception at the goal line in the third quarter.

With scores of 1, 3 and 36 yards, Gabriel joined Mike Ditka in 1963 as the only Bears receivers with three TD catches in the first half of a game. Gabriel made six catches for 75 yards before leaving in the second half with a concussion.

The Bears took advantage of five turnovers by Redskins quarterback Case Keenum: two interceptions by Ha Ha Clinton-Dix, including a pick six, another by Kyle Fuller and fumbles forced by Khalil Mack and Danny Trevathan.

“That’s all me,” said Keenum, who was 30 of 43 for 331 yards and two touchdowns that didn’t compensate for the turnovers. “Turn it over that many times as a quarterback, I let my team down. It’s all on me. I take complete responsibility. I have to take care of the ball better.”

With the offense up to the defense’s speed in the first half, Chicago put up 28 points in two quarters after scoring a total of 19 the past two weeks, 12 of which came on field goals from Eddy Piñeiro.

Mack had two of the Bears’ four sacks to continue a dominant start by the defense that didn’t give up a Washington TD until midway through the third quarter. Keenum’s two TD passes came long after fans chanted for rookie quarterback Dwayne Haskins and booed the Redskins off the field at halftime.

Washington’s defense that wilted in the second half of its first two losses had few answers for Trubisky all game Monday. Eight days after coach Jay Gruden said, “I don’t think we have to push the panic button yet,” some significant changes could be coming soon.

Before Gruden’s job security is really in question, defensive coordinator Greg Manusky looks like the logical target as the first coach to take the fall. Washington’s defense ranked in 21st and 17th in the NFL in Manusky’s first two seasons in charge and is on pace to finish worse than that this year.

“We’ve got some talent,” Gruden said. “We’ve just got to coach ‘em up better, play better, be more balanced, protect the football. And defensively, stay after it.”

The “Let’s go Haskins” chants notwithstanding, the Redskins are far more likely to turn to longtime backup Colt McCoy if they make a change at the position. McCoy is working toward being healthy again nine months after breaking his right leg.

When the Redskins signed former New York Giants safety Landon Collins, it effectively spelled the end of their chances of re-signing Clinton-Dix, a trade acquisition last year from Green Bay who played nine games for them. Clinton-Dix made his old team pay with a first quarter interception he returned 37 yards for his first career touchdown.

Clinton-Dix for good measure picked off Keenum in the third quarter and returned it 59 yards.

Piñeiro, who was questionable because of a knee injury suffered while lifting weights, missed a 44-yard field goal attempt in the third quarter and was good from 38 yards in the fourth. “Eddy Money” was 4 of 4 going into the night, including a 53-yard game-winner at Denver in Week 2.

Bears: DT Akiem Hicks left early in the fourth quarter with a knee injury. ... RT Bobby Massie was a surprise scratch with what coach Matt Nagy called “a small case of vertigo.” ... DE Bilal Nichols was out with a broken hand.

Redskins: TE Jordan Reed (concussion) missed a third consecutive game, and CB Quinton Dunbar (knee) was out for the second week in a row.

Redskins: Look to avoid an 0-4 start when they visit Daniel Jones and the New York Giants on Sunday.