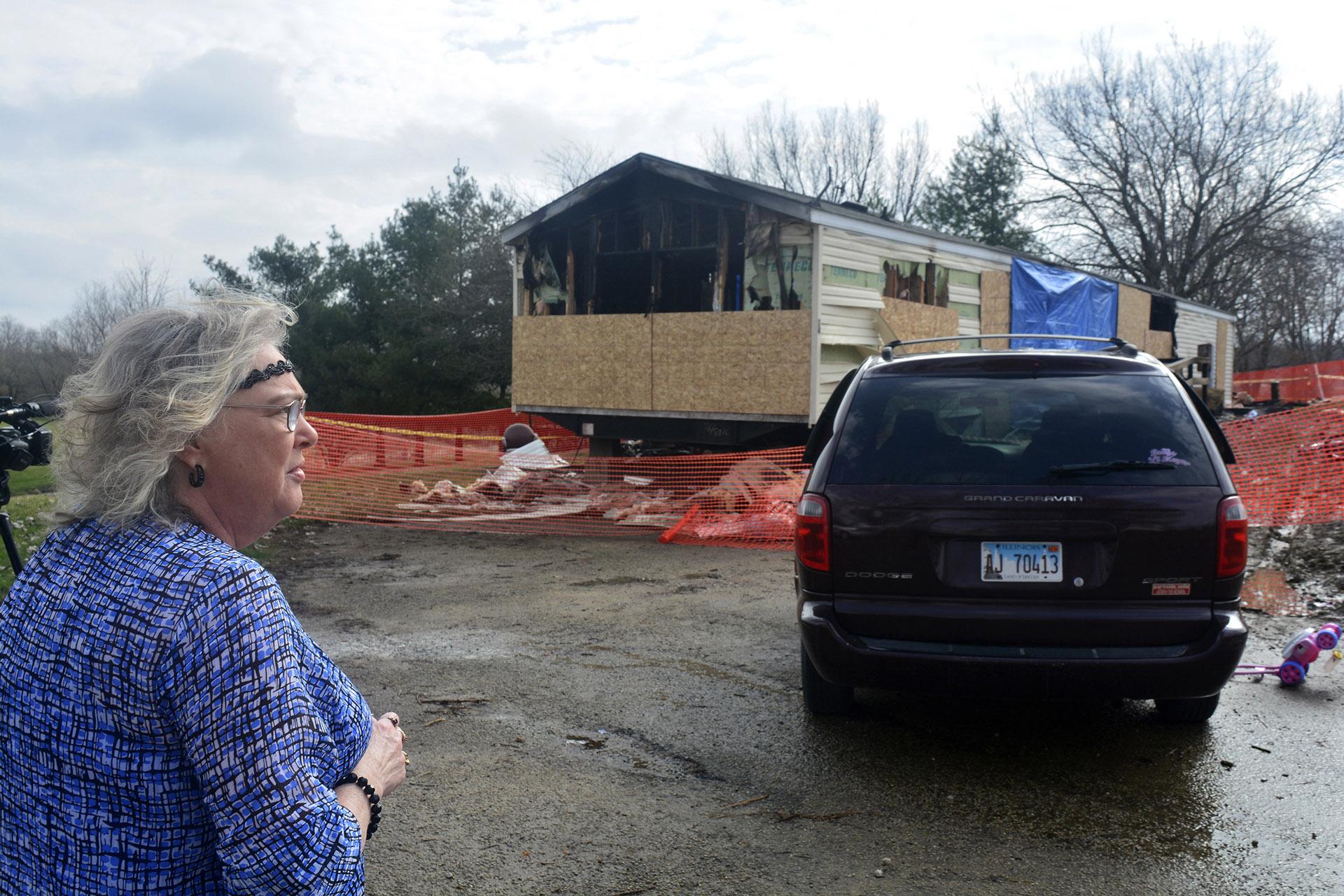 In this Sunday, April 7, 2019, file photo, Marie Chockley, a resident of the Timberline Trailer Court, north of Goodfield, Illinois, surveys the damage that was caused by a Saturday night fire that killed five residents in a mobile home. (Kevin Barlow / The Pantagraph via AP, File)

CHICAGO (AP) — A 9-year-old child accused of causing a mobile home fire that killed three children and two adults in central Illinois has been charged with five counts of first-degree murder.

The juvenile also was charged with two counts of arson and one count of aggravated arson, the (Peoria) Journal Star reported.

The April 6 fire killed a 1-year-old, two 2-year-olds, a 34-year-old man and a 69-year-old woman at the Timberline Mobile Home Park near the village of Goodfield, about 150 miles southwest of Chicago.

Woodford County State’s Attorney Greg Minger would not reveal other details about the suspect, including a possible relationship to the victims.

No child as young as this one has been accused in a mass killing since at least 2006, according to the AP/USATODAY/Northeastern University mass murder database. It tracks all U.S. homicides since then in which four or more people were killed (not including the offender) over a short period of time (24 hours), regardless of weapon, location, victim-offender relationship or motive.

“It was a heavy decision,” Minger said. “It’s a tragedy, but at the end of the day, it’s charging a very young person with one of the most serious crimes we have. But I just think it needs to be done at this point, for finality.”

A major challenge for prosecutors will be trying to prove the child formed an intent to kill in advance, which is required in first-degree murder cases, explained Gus Kostopoulos, a former prosecutor-turned-juvenile defense lawyer in Chicago.

“Nine-year-olds don’t know that Santa Claus doesn’t exist. They don’t know people die and don’t come back to life,” he said. “I don’t know if 9-year-olds can form intent to commit murder.”

A leading Illinois advocate for children ensnared in the criminal justice system sharply criticized the decision to charge a child that young with murder.

“The charges are completely out of line, given everything we have learned ... especially about the brain development of children,” said Betsy Clark, the president of Juvenile Justice Initiative, based in Evanston, Illinois.

Clark spoke to The Associated Press Tuesday by phone from New York, where she was attending the official release of a United Nations report on the prosecution of children.  It recommends that children under 14 should never be prosecuted, no matter the crime.

Clark said 14 is the minimum age of criminal responsibility in many countries, including Germany.

In the 1890s, Illinois became among the first places in the world to establish a juvenile court, thereby taking minors out of the adult system, Clark said. But the case announced this week shows Illinois is no longer on the cutting age of juvenile justice, she said.

“We used to be a world leader and now we are so far behind,” she said.

Charges alleging violent crimes against children are rare, said Clark, adding that she hasn’t heard of other cases in which someone that young was charged with so many killings.

If convicted, the child could be placed on probation for at least five years but not beyond the age of 21, Minger said. Therapy and counseling would be likely.

“Probation, given the age, is about the only outcome that could happen here,” he said.

No arrest warrant is to be issued for the suspect, Minger said. The suspect will be appointed an attorney and will be subject to a bench trial, in front of a judge, he said.

Under Illinois law, a suspect younger than 10 cannot be detained. And a minor is not given a public jury trial and not entitled to one — unless the minor is charged as an adult.

The filing of murder charges against children under 10 is rare but not unprecedented.

Last month, a Michigan judge dismissed a murder charge against a 9-year-old accused of fatally shooting his mother in their home near Sturgis. St. Joseph County Family Division Judge David Tomlinson ruled that, under Michigan law, the boy was presumed incompetent for trial because he’s not yet 10.

“This case disturbs me more than any case I’ve ever dealt with,” the judge said.