‘We Need Help’: Rescuers in Bahamas Face a Ruined Landscape 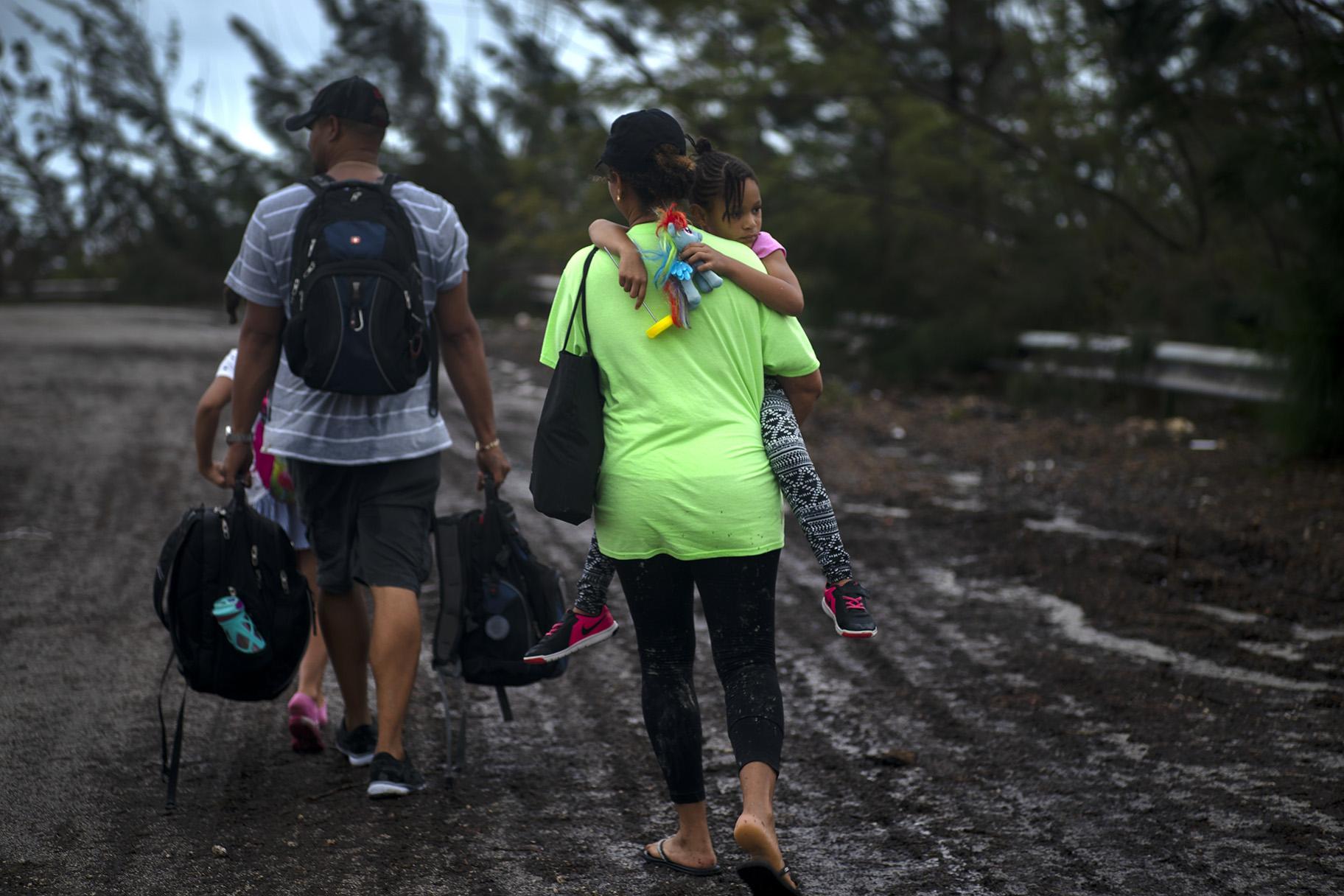 A family walks on a road after being rescued from the floodwaters of Hurricane Dorian, near Freeport, Grand Bahama, Bahamas on Tuesday Sept. 3, 2019. They were rescued by volunteers who drove a bus into the floodwaters to pick them up. (AP Photo / Ramon Espinosa)

FREEPORT, Bahamas (AP) — Rescue crews in the Bahamas fanned out across a blasted landscape of smashed and flooded homes Wednesday, trying to reach drenched and stunned victims of Hurricane Dorian and take the full measure of the disaster. The official death toll stood at seven but was certain to rise.

A day after the most powerful hurricane on record ever to hit the country finished mauling the islands of Abaco and Grand Bahama, emergency workers had yet to reach some stricken areas.

Dorian, meanwhile, pushed its way northward off the Florida shoreline with reduced but still-dangerous 105 mph winds on a projected course that could sideswipe Georgia and the Carolinas. An estimated 3 million people in the four states were warned to clear out, and highways leading inland were turned into one-way evacuation routes.

The storm parked over the Bahamas and pounded it for over a day and a half with winds up to 185 mph and torrential rains, swamping neighborhoods in muddy brown floodwaters and destroying or severely damaging thousands of homes.

The U.S. Coast Guard, Britain’s Royal Navy and relief organizations including the United Nations and the Red Cross joined the burgeoning effort to rush food and medicine to survivors and lift the most desperate people to safety by helicopter. The U.S. government also dispatched urban search-and-rescue teams.

The Bahamian government sent hundreds of police officers and marines into the stricken islands, along with doctors, nurses and other health care workers.

“Today will tell the magnitude of the problem,” Health Minister Duane Sands said.

Londa Sawyer stepped off a helicopter in Nassau, the capital, with her two children and two dogs after being rescued from Marsh Harbor in the Abaco islands.

“It looks like a bomb hit,” she said. “I’m just thankful I’m alive. The Lord saved me.”

Sawyer said that her home was completely flooded and that she and her family fled to a friend’s home, where the water came up to the second floor and carried them up to within a few feet of the roof. She said she and her children and the dogs were floating on a mattress for about half an hour until the water began receding. 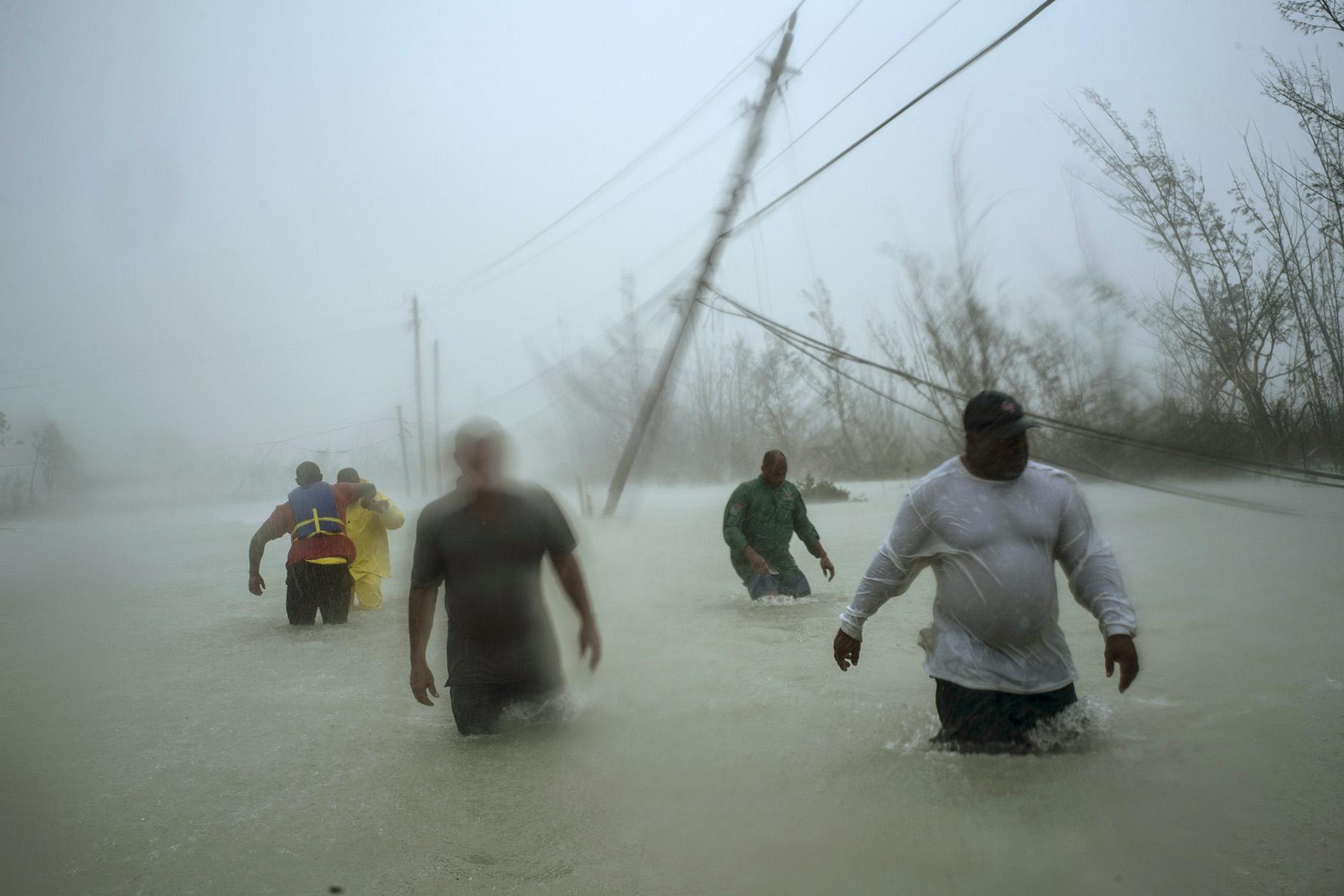 Volunteers walk under the wind and rain from Hurricane Dorian through a flooded road as they work to rescue families near the Causarina bridge in Freeport, Grand Bahama, Bahamas on Tuesday, Sept. 3, 2019. The storm’s punishing winds and muddy brown floodwaters devastated thousands of homes, crippled hospitals and trapped people in attics. (AP Photo / Ramon Espinosa)

Sandra Cooke, who lives in Nassau, said her sister-in-law was trapped under her roof for 17 hours in the Abaco islands and wrapped herself in a shower curtain as she waited.

“The dog laid on top of her to keep her warm until the neighbors could come to help,” she said. “All of my family lives in Marsh Harbor, and everybody lost everything. Not one of them have a home to live anymore.”

Abaco and Grand Bahama islands, with a combined population of about 70,000, are known for their marinas, golf courses and all-inclusive resorts. Nearly half the homes were feared severely damaged or destroyed, the Red Cross said Tuesday.

At 11 a.m. EDT, Dorian was centered about 90 miles northeast of Daytona Beach, Florida, moving northwest at 9 mph. Hurricane-force winds extended up to 70 miles from its center.

Dorian was expected to pass dangerously close to Georgia and perhaps strike South Carolina or North Carolina on Thursday and Friday with the potential for over a foot of rain in some spots. Forecasters warned that Dorian is likely to cause storm surge and flooding even if its core does not blow ashore.

“Hurricane Dorian has its sights set on North Carolina,” Gov. Roy Cooper said. “We will be ready.”

With the threat to Florida easing and the danger shifting northward, Orlando’s airport reopened, along with Walt Disney World and Universal. To the north, ships at the big Norfolk, Virginia, naval base were ordered to head out to sea for safety, and warplanes at Langley Air Force Base in Virginia were sent inland.

The U.S. mainland recorded its first death in connection with the hurricane, that of an 85-year-old man in North Carolina who fell off a ladder while trying to prepare his home for the storm. Dorian was also blamed for one death in Puerto Rico.

On Tybee Island, Georgia, Debbie and Tony Pagan stacked their beds and couches atop other furniture and covered their doors with plastic wrap and sandbags before evacuating the place. Their home flooded during both Hurricane Matthew in 2016 and Irma in 2017.

“It’s a terrible way to live,” Debbie Pagan said. “We have the whole month of September and October to go. How would you like to be living on pins and needles?”

Another Tybee islander, Sandy Cason, said: “The uncertainty and the unknown are the worst part. Just not knowing what’s going to be here when you get back.”

Along King Street in historic Charleston, South Carolina, dozens of shops and restaurants typically bustling with tourists were boarded up, plywood and corrugated metal over windows and doors, as the flood-prone downtown area braced for high water.

Mark Russell, an Army veteran who has lived in South Carolina much of his life, went to a hurricane shelter right away. As for those who hesitated to do so, he said: “If they go through it one time, maybe they’ll understand.”