Food insecurity is a nationwide problem, but studies show it’s even more acute in Chicago. One food pantry is trying to tackle the problem by establishing itself in a location many clients already visit – and providing ingredients and resources others don’t.

On a rainy late summer day, Holly Moore is making celery soup inside her Bridgeport kitchen.

“I’m not really ready for soup season yet, but I know that it’s inevitable right now!” Moore laughs. “I started this a couple hours ago. I wanted it to sit and marinate a little bit.”

All the ingredients she’s working with – the fresh celery and broccoli, the herbs and spices – came from a food pantry in nearby Pilsen. Moore’s been struggling with health problems since 2016. She learned about the pantry through the cancer department at the University of Illinois Health System.

“I’d have my bills paid and everything but it was always food that was kind of my problem,” Moore said. “I was absolutely amazed by how much they had, and the quality.”

The UI Health Pilsen Food Pantry is the brainchild of doctors Evelyn Figueroa and Alex Wu. Figueroa, who’s spent her career in nonprofit family medicine, says she always thought of herself as one of the good guys – until she realized a patient of hers was struggling with homelessness, and she’d missed it. 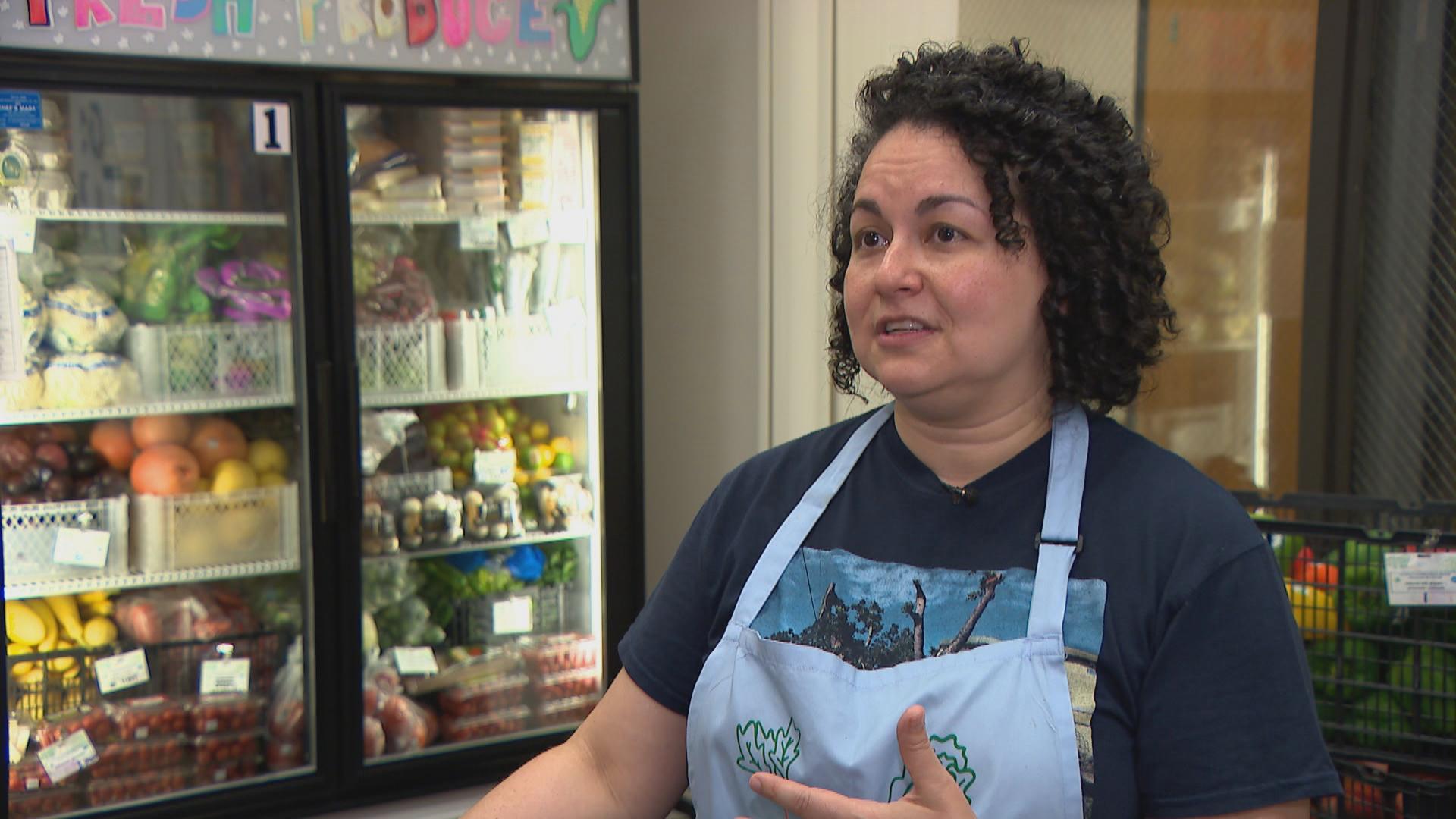 “It was a real wake-up call for me to become more assertive with my patients and do a better social health inventory on them,” Figueroa said.

Around the same time, Figueroa and Wu learned about a food pantry located inside a health clinic in San Diego. It seemed like a no-brainer: screen patients for food insecurity, educate them about important dietary restrictions, then send them to a pantry in the same building.

“The research from the inspirational food pantry in San Diego showed if you provided food on site rather than a referral that you increased uptake by three to four times,” Figueroa said.

The Pilsen food pantry opened in early 2018, and in many ways it’s still a startup, almost entirely volunteer run, with tons of legwork done by Figueroa, Wu and their kids. On a recent morning, there was plenty for the family to do: A Greater Chicago Food Depository driver dropped off 900 pounds of donated milk.

“We do a lot of shuffling to make everything fit,” Figueroa said. “Tetris is my favorite game!”

The milk was one of eight deliveries the pantry usually gets each week. Figueroa, Wu and their volunteers also make trips all over town to pick up food that would otherwise be thrown away.

“Forty percent of the food we make in the U.S. we throw into a landfill or compost,” Figueroa said, “which is surprising when … one of out of five families in Chicago are food insecure. When we screened this Pilsen clinic, 80% of the people indicated they’d had difficulty getting healthy food and food had run out in the past six months.” 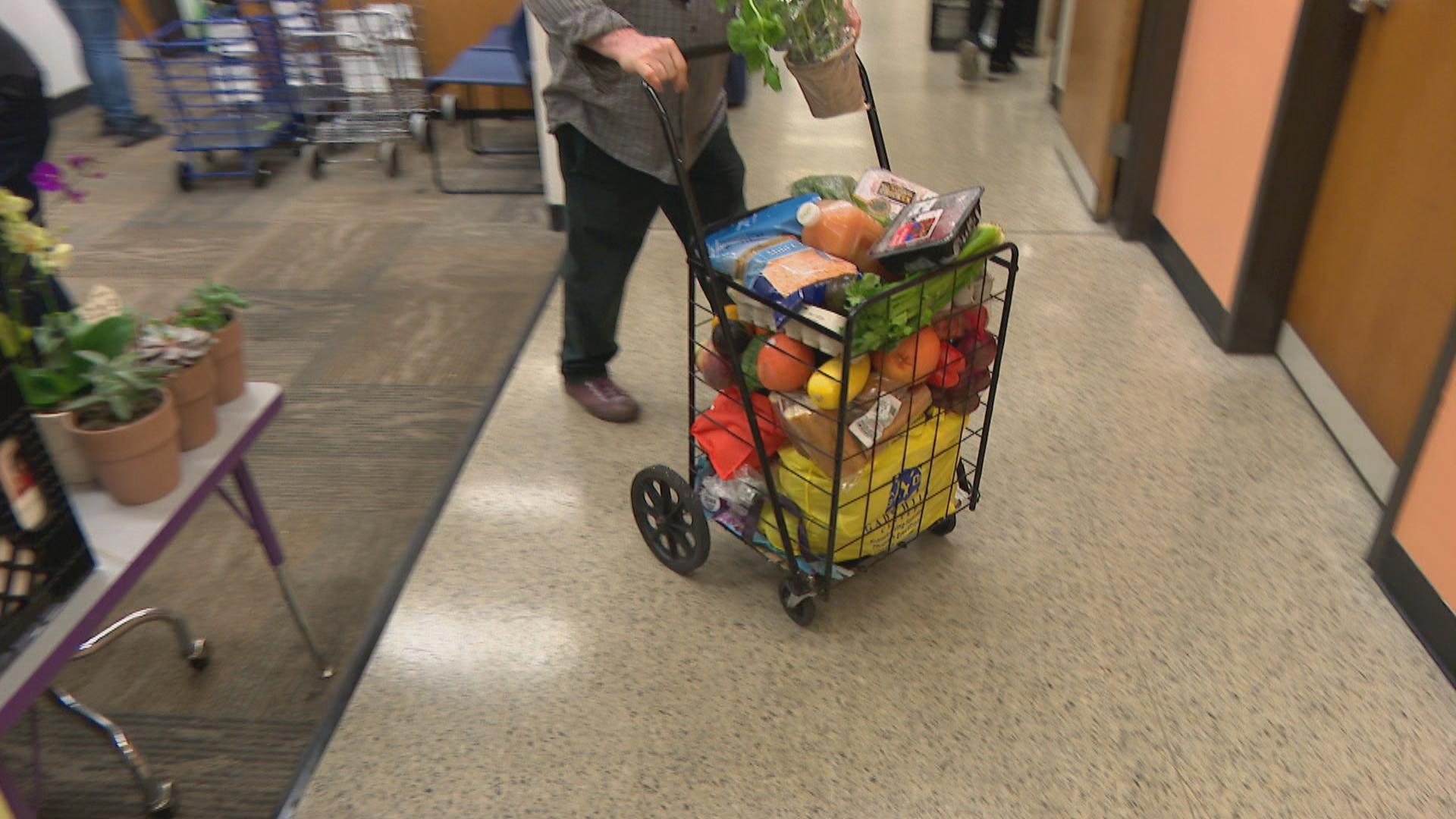 The pantry also provides ingredients that Figueroa says others don’t: oil and vinegar, fresh herbs, spices and lots of fresh produce, things that help clients cook a full meal instead of incoherent ingredients. And they try to stock things many Latinos like to cook with, since they make up the majority of the pantry’s clients.

The pantry distributes about 50 to 90 pounds of food per family each week, with hopes to expand. Figueroa says it’s all about thinking of food as medicine, since food insecurity isn’t just about hunger.

Client Holly Moore’s health is on the upswing. She says she’s been regaining her strength and rebuilding her life. With her celery soup simmering happily on the stove, she’s now at work on a beet hummus.

The hummus is from a recipe she got – along with all the ingredients – from Wu and Figueroa’s pantry.

“I always recommend (the pantry) to my friends who are struggling and aren’t a patient like myself,” Moore said. “I have to tell them it isn’t just for somebody who’s going through some health problems. It’s for anybody in the city.”

The pantry is open from noon to 4 p.m. Monday through Friday. Volunteer shifts run six days a week, with Sundays set aside for prep.

Trump Proposal Seeks to Crack Down on Food Stamp ‘Loophole’