Federal authorities have repeatedly warned about foreign influence in U.S. elections, and their expectation is that Russia and possibly other actors are gearing up to do it again in 2020.

But a core federal agency that keeps watch on elections is suddenly without any enforcement ability.

The Federal Election Commission is the agency that polices the nation’s campaign finance laws. If an elected official violates those laws, including accepting anything of value from a foreign entity, the FEC investigates and issues fines. The FEC is supposed to have six members but it has been running short of that, and when FEC Vice Chairman Matthew Petersen steps down at the end of this week – with no replacement – there will be just three members. Without at least four commissioners, the FEC lacks a quorum and thus cannot enforce the nation’s election law or take any official enforcement action.

FEC Chair Ellen Weintraub says the situation should concern those who want to feel confident in the integrity of the coming election.

“I am concerned about what will happen in enforcement,” Weintraub said Tuesday during a visit to Chicago. “We will continue to investigate the matters that have been previously authorized for investigation, but we won’t be able to resolve any of them.”

“No one should be under the delusion that they can just get away with anything right now. There’s a long statute of limitations, and we’re not just going to throw these complaints in the trash at a time when we don’t have a quorum,” Weintraub said.

The timing of the FEC’s vacancy couldn’t be worse. Campaigns are now gearing up for the 2020 election, which could see a total of $10 billion in spending at a time in which federal authorities have repeatedly asserted that Russia is poised to influence the presidential election. Add to this the complicated web of PACs, super PACs and 501c3s that work in support or against certain candidates. So-called dark money groups, or 501c4s, don’t have to report where their donations come from. That means foreign actors can get around the law and route their money to U.S. campaigns, and the FEC has no ability to police it.

“If indeed a Russian banker were trying to influence our elections, trying to funnel money, I don’t think he would do it by writing a check from the Central Bank of Moscow, signing his name with a flourish and mailing it to a group that’s active in our elections, I think he’d try and hide it,” Weintraub said. “He’d try to hide it in various entities that we’ve seen domestic actors try and hide the money by funneling it through LLCs, 501c4s, all sorts of organizations. And we’ve seen folks go to great lengths to try and hide the money spent in our elections. So it’s incumbent upon an entity that has subpoena authority and tools to get to the bottom of that.”

In fact, Weintraub says, she attempted to have the FEC investigate a report from the McClatchy news service that the FBI was investigating whether a massive political donation to the NRA from Russians tied to Vladimir Putin was intended to be funneled to the Trump campaign. But Weintraub, who is a Democrat, says Republican FEC commissioners, who had the majority, unanimously voted against opening an investigation.

“The allegation itself was so important and so fundamental to the integrity of our system,” Weintraub said. “The notion that the Russians might have been funneling potentially millions of dollars through a U.S. organization into the political arena trying to influence our elections, that is a blockbuster allegation. So we needed to look into it to put it to rest one way or the other.”

The current lack of quorum of FEC commissioners is raising alarm bells from watchdogs across the country. A former Republican member of the FEC who now heads a group called the Campaign Legal Center issued the following statement:

“President Trump and the U.S. Senate should treat this resignation as an emergency and agree on the nomination and confirmation of a new slate of FEC commissioners who are qualified for the job and committed to enforcing our nation’s election laws. Without a functioning election watchdog, the vulnerabilities in U.S. elections that were exposed in 2016 by Russia will be exploited to greater effect by foreign and domestic actors in the 2020 election and beyond. The public’s right to fair and transparent elections is at stake.”

A commissioner has to be appointed by the president and confirmed by the Senate. Trump nominated Texas attorney Trey Trainor in 2017, but the Senate has not held confirmation hearings.

Both of Illinois’ U.S. Senators were not immediately available for comment.

Weintraub was in Chicago for a regional workshop on campaign finance law for lawyers and political workers.

The FBI can also investigate campaign finance and election fraud. 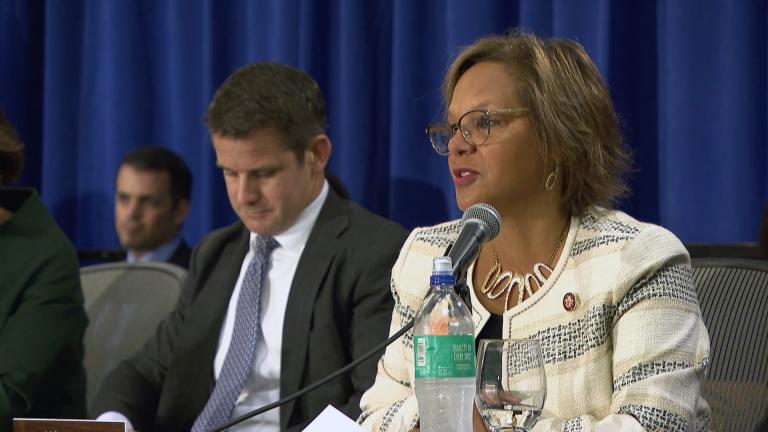