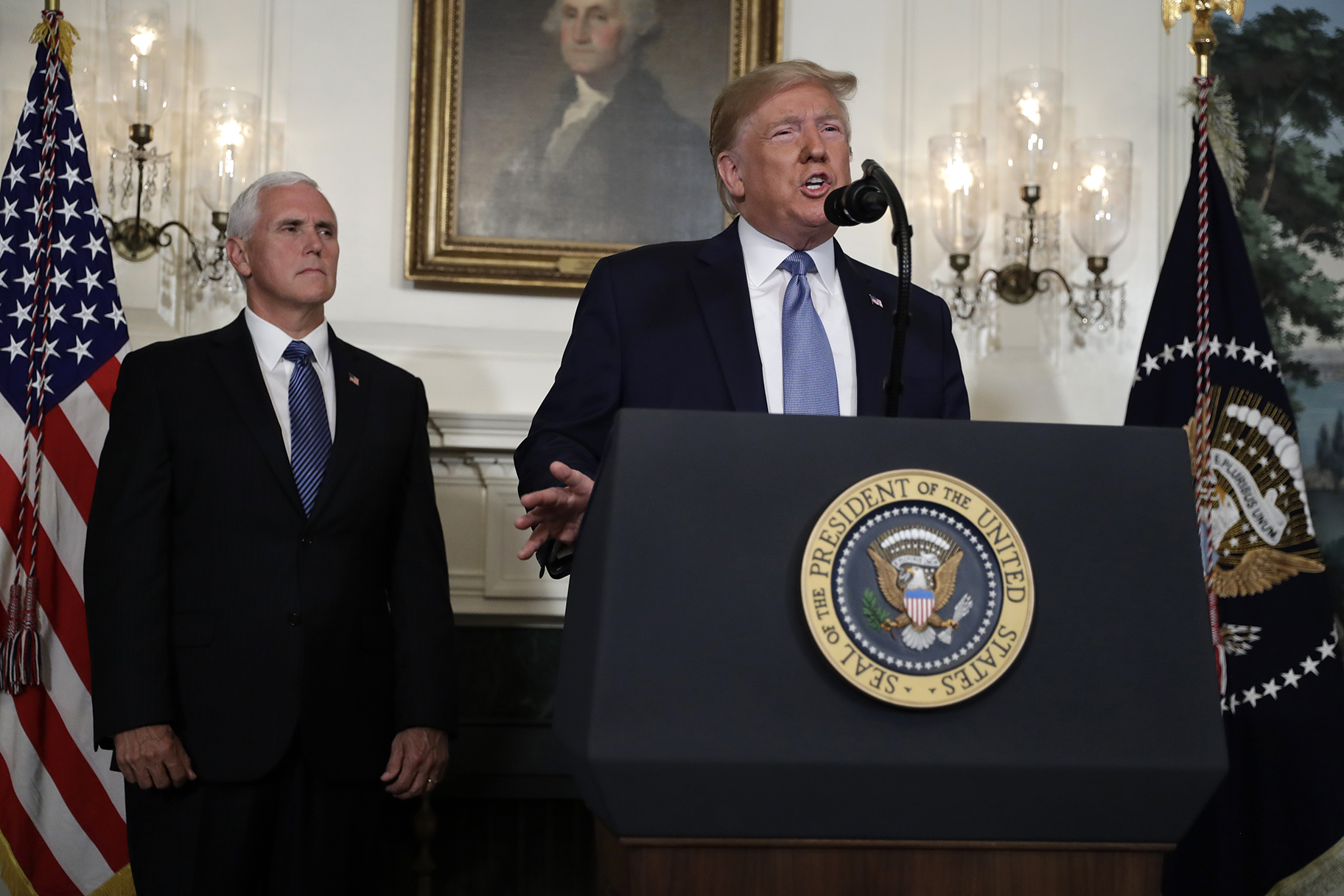 President Donald Trump speaks about the mass shootings in El Paso, Texas, and Dayton, Ohio, in the Diplomatic Reception Room of the White House on Monday, Aug. 5, 2019, in Washington. (AP Photo / Evan Vucci)

WASHINGTON (AP) — President Donald Trump on Monday condemned weekend shootings in Texas and Ohio as barbaric crimes “against all humanity” and called for bipartisan cooperation to respond to an epidemic of gun violence. He blamed mental illness and video games but made no mention of more limits on sales of firearms.

Trump said he wanted legislation providing “strong background checks” for gun users, though he has reneged on previous promises after mass attacks. He offered few details.

“We vow to act with urgent resolve,” Trump said, speaking from the White House about shootings that left 31 dead as the count rose on Monday. His scripted remarks came after two days of muted response to the shootings, and included a solitary denunciation of white supremacy, which he has been reluctant to criticize.

“In one voice, our nation must condemn racism, bigotry and white supremacy,” Trump said, adding that he had directed the FBI to examine steps to identify and address domestic terrorism. “These sinister ideologies must be defeated. Hate has no place in America,” he said.

Trump suggested earlier Monday on Twitter that a background check bill could be paired with his long-sought effort to toughen the nation’s immigration system. But he didn’t say how or why he was connecting the issues. Both shooting suspects were U.S. citizens, and federal officials are investigating anti-immigrant bias as a potential motive for the El Paso, Texas, massacre.

He did not elaborate on that proposal during his 10-minute address from the Diplomatic Reception Room. But Trump has frequently sought to tie his immigration priorities — a border wall and transforming the legal immigration system to one that prioritizes merit over familial ties — to legislation around which he perceives momentum to be building.

Trump’s proposed responses attempt to shift blame away from the heated rhetoric coming from the White House and his own campaign rallies and mostly leave it to Congress, which is on recess, to sort out his solutions.

He signaled he would oppose large-scale gun control efforts pushed by Democrats, saying, “hatred pulls the trigger, not the gun.”

Trump called for law enforcement and social media companies to do more to combat extremism and spot warning signs of violence online. He also called for a reduction in the “glorification” of violence in American culture, laws to make it easier to commit those with mental illness and “red flag laws” to separate such individuals from firearms.

He directed the Department of Justice to seek and prioritize the enforcement of the death penalty in cases of hate crimes and mass shootings.

Congress has proven unable to pass substantial gun violence legislation this session, in large part because of resistance from Republicans, particularly in the GOP-controlled Senate.

And Trump himself has reneged on previous pledges to strengthen gun laws.

After other mass shootings he called for strengthening the federal background check system, and in 2018 he signed legislation to increase federal agency data sharing into the system. But he has resisted Democratic calls to toughen other gun control laws.

At a February meeting with survivors and family members of the 2018 Parkland, Florida, school shooting in which 17 people died, Trump promised to be “very strong on background checks.”

Trump claimed he would stand up to the gun lobby and finally get results in quelling gun violence. But he later retreated, expressing support for modest changes to the federal background check system and for arming teachers.

“It took less than three hours for the president to back off his call for stronger background check legislation,” they said in a joint statement. “When he can’t mention guns while talking about gun violence, it shows the president remains prisoner to the gun lobby and the NRA.”

With his Monday proposals, Trump is providing a response to the shootings with ideas that many Republicans in Congress can embrace — without confronting the gun lobby and tackling the problems with firearm accessibility that many view as a driver of gun violence.

Trump ally Rep. Kevin McCarthy, the House minority leader, has raised concerns about violence in video games, while another Trump confidant, Sen. Lindsey Graham, tweeted his support over the weekend for his own red flag mental health bill. At the same time, many Democrats oppose the death penalty.

In the El Paso attack, investigators are focusing on whether it was a hate crime after the emergence of an anti-immigrant screed that was posted online shortly beforehand. Detectives sought to determine if it was written by the man who was arrested.

On Twitter Monday, Trump seemed to deflect from scrutiny over the manifesto, which had language mirroring some of his own. As Democrats have called on Trump to tone down his rhetoric, Trump blamed the news media for the nation’s woes.

“Fake News has contributed greatly to the anger and rage that has built up over many years,” he claimed.

As Trump weighs trips to the affected communities — the Federal Aviation Administration advised pilots of a presidential visit Wednesday to El Paso and Dayton, Ohio — some local lawmakers signaled opposition to his presence.

Rep. Veronica Escobar, a Democrat who represents El Paso, said Trump is “not welcome” to visit the city.

In recent weeks, the president has issued critical tweets about four women of color who serve in Congress, and in rallies has spoken of an “invasion” at the southern border. His reelection strategy has placed racial animus at the forefront in an effort that his aides say is designed to activate his base of conservative voters.

Trump also has been widely criticized for offering a false equivalency when discussing racial violence, notably when he said there were “very fine people on both sides,” after a white supremacist rally in Charlottesville, Virginia, that resulted in the death of an anti-racism demonstrator.

On gun control, a majority of Americans have consistently said they support stronger laws, but proposals have stalled repeatedly in Congress, a marked contrast to some countries that have acted swiftly after a mass shooting.

In March, a poll conducted by The Associated Press-NORC Center for Public Affairs Research found a majority of Americans favor stricter gun laws. The survey was conducted both before and after a mass shooting at two mosques in New Zealand. It found that 67 percent of Americans support making US gun laws stricter, while 22 percent say they should be left as they are and 10 percent think they should be made less strict.

Less than a week after the mosque shootings, New Zealand moved to ban “military-style” semi-automatic weapons and high-capacity magazines; similarly, after a mass shooting in 1996, Australia enacted sweeping gun bans within two weeks.

The poll suggested many Americans would support similar measures, but there’s a wide gulf between Democrats and Republicans on banning specific types of guns. Overall, 6 in 10 Americans support a ban on AR-15 rifles and similar semi-automatic weapons. Roughly 8 in 10 Democrats, but just about 4 in 10 Republicans, support that policy.