The city of Chicago saw a little more tax revenue than expected last year. That’s the sliver of good news in a new report that spells out the bleak long-term financial forecast.

The Comprehensive Financial Report is a deep dive into the final 2018 performance the city is obligated to release every year.

In some ways, it was a pretty good year: The city’s general fund saw about $44 million more than projected largely because of a strong economy.

But that doesn’t mean the city’s financial fortunes are finally turning around. It’s instead a ripple of good news in a sea of billions of dollars of long-term debt.

Both the current and previous administration have projected a budget deficit that will probably top out above $700 million. Taxpayers have been putting more in property taxes and water and sewer fees into the city’s four pension funds, but that hasn’t brought the unfunded pension liability down. It has actually increased from $28 billion to $30 billion across the city’s four funds.

A lot of this is because of poor stock market performance at the end of the year. According to one municipal bond analyst, it’ll be years before that unfunded liability stops growing.

“There’s a number called the tread water number,” said Brian Battle, director of Performance Trust Capital Partners. “That’s the amount of money the city has to put in just to not get any worse. We’re still behind that number. It’s a number that’s so big and so threatening and consuming a larger and larger part of the city’s budget, that pretty soon, we’re going to have so much money going into the pension plans, that we’re going to have fewer teachers, fewer cops, less services. That point is coming in the future, so the sooner we deal with it, the better.”

This increase was actually projected and not a surprise to any analyst. The city will have to find about $1 billion more in revenue to put into the funds over the next three years

Mayor Lori Lightfoot has said openly there will need to be more revenue, and has floated ideas like an expansion of the sales tax to include some services, taxing retirement income, and asking the state to merge Chicago’s pension fund into one big downstate fund.

In the report, Lightfoot included a statement that reads, in part:

“While these costs loom large for next year and beyond, our administration will be looking at how city government functions to develop a sustainable roadmap for the future. As part of that, we will address our liabilities head on by fulfilling our pension obligations and making our government work more fairly and efficiently for all our residents.”

Either way, Battle says the city is running out of options to address the growing pension liability.

“Either you have to diminish benefits, which is prohibited by the Illinois constitution, or you have to raise taxes,” Battle said, noting that Lightfoot’s service tax proposal won’t be enough to fill the hole. “It might have to be something else like retirement income, which is something Illinois doesn’t do.” 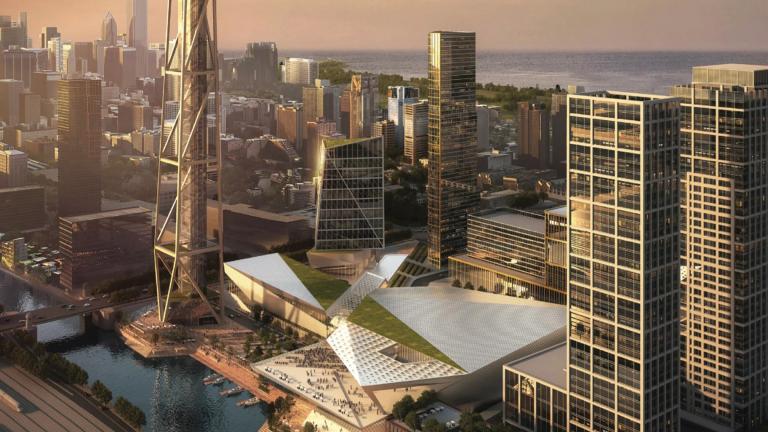