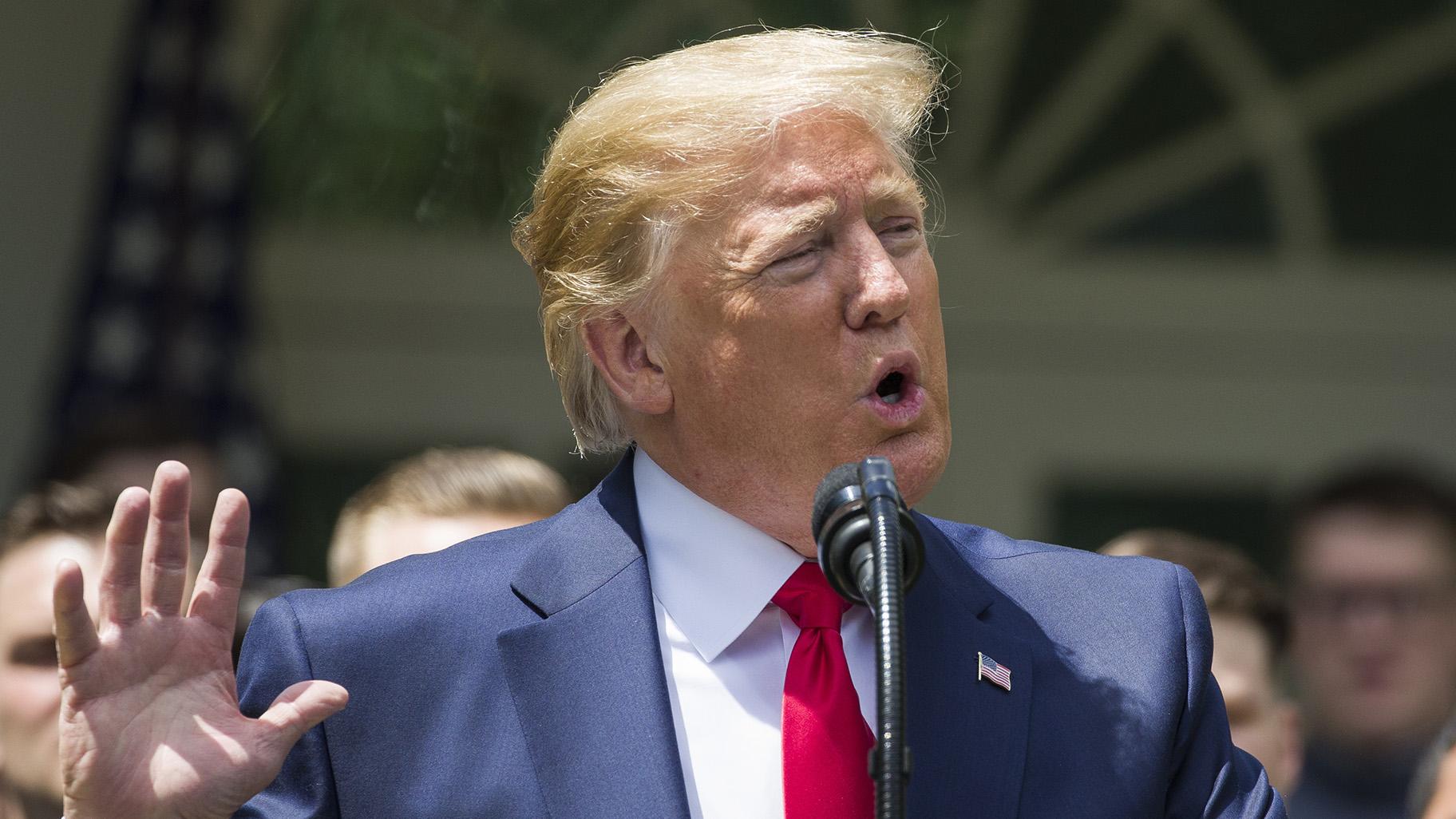 President Donald Trump speaks during the presentation of the Commander-in-Chief’s Trophy to the U.S. Military Academy at West Point football team in the Rose Garden of the White House, Monday, May 6, 2019, in Washington. (AP Photo / Alex Brandon)

WASHINGTON (AP) — Four Democrats have joined a slowly growing group calling for impeachment proceedings against President Donald Trump, including a close ally of House Speaker Nancy Pelosi and a Democrat who flipped a Republican district.

Illinois Rep. Jan Schakowsky, a congressional veteran, said in a Twitter video posted Wednesday evening that Trump “certainly has committed all kinds of offenses that meet the standard” for a formal charge by the House. Also Wednesday, Illinois Rep. Sean Casten told the Chicago Sun-Times that he wants Congress to use “every tool” to investigate Trump, even if that means paying a political price in the 2020 elections.

On Thursday, Rep. Tony Cardenas of California and Rep. Nydia Velazquez of New York tweeted separately that they had each come to the decision after studying special counsel Robert Mueller’s report.

The lawmakers’ announcements came after former White House aide Hope Hicks refused to answer House Judiciary Committee questions on Wednesday about Trump during his presidency. The new calls highlight a slowly growing chorus from almost 70 House members for an impeachment inquiry, though Democrats still oppose such a move. And Pelosi has resisted launching official proceedings without broad bipartisan support.

“The House of Representatives should begin an impeachment inquiry officially, because President Trump certainly has committed all kinds of offenses that meet the standard of impeachment,” she said in the tweeted video.

Casten on the same day set himself apart from many of the Democrats’ most vulnerable freshmen who helped flip the House from Republican control in 2018.

“I am in favor of initiating an impeachment inquiry,” he told the Chicago Sun-Times in remarks confirmed by a spokeswoman.

All of the lawmakers said launching an impeachment inquiry would give the House more legal strength to compel information from a president who has vowed not to cooperate with Democratic investigations.

“We cannot allow Trump to continue to obstruct Congress’s investigation and prevent us from getting to the truth,” Cardenas said in a statement posted on Twitter. “We have come up against a wall. It is time to break down that wall.”

Lawmakers who have been calling for an impeachment inquiry for weeks said they were pleased to see the numbers rising.

“I am cheered that more and more colleagues understand that we are in an unprecedented predicament,” said Maryland Rep. Jamie Raskin, a member of the House Judiciary Committee who has personally pressed Pelosi on the matter.

Still, even as the ranks have grown slowly — New York Democrat Brian Higgins also called for Trump’s impeachment this week —it's likely to take more to push Pelosi and the House toward formal impeachment proceedings.

The investigations and hearings aren’t moving Pelosi or the public toward supporting impeachment. It was far from clear, for example, that Hicks’ closed-door testimony Wednesday revealed anything new.

Also, the political clock is ticking toward 2020, when many Democrats say it will be too late to launch impeachment proceedings.

Pelosi on Wednesday said at a Christian Science Monitor breakfast that she agreed Trump is obstructing justice by his refusal to comply with congressional requests for material. But she added that there shouldn’t be an inquiry until “you're ready to impeach.”

At the same time, she said a less-formal censure would be letting Trump off too lightly.

“That’s a day at the beach for the president, or at his golf club or wherever he goes,” she said of censure.