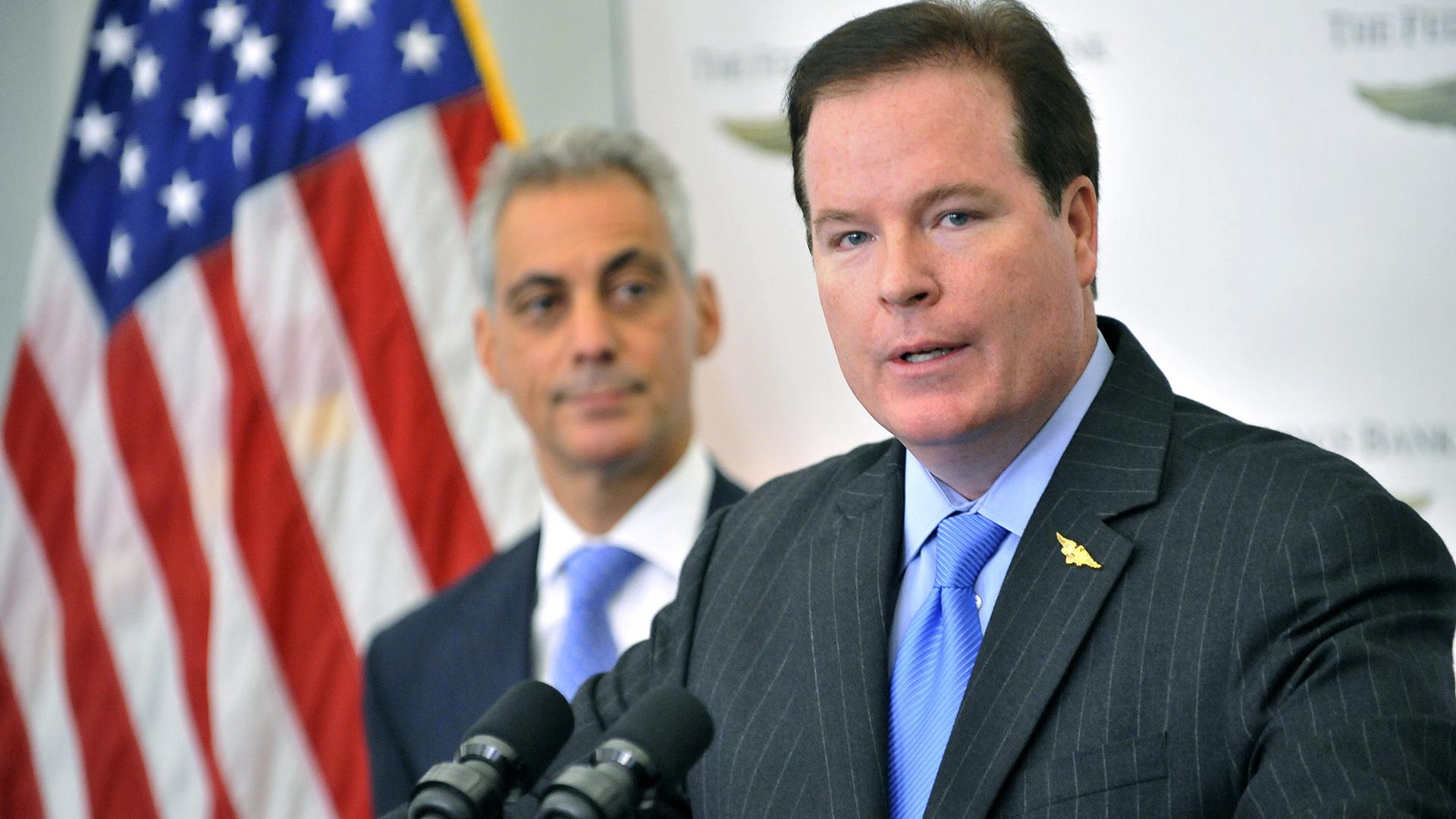 In this June 28, 2012 photo, Stephen M. Calk, Chairman and Chief Financial Official of The Federal Savings Bank speaks as Chicago Mayor Rahm Emanuel listens during an announcement about job growth and economic development and a corporate headquarters relocation by the Federal Savings Bank to Chicago. (Al Podgorski / Chicago Sun-Times via AP)

Stephen M. Calk, 54, was scheduled to appear in Manhattan federal court in the afternoon. A message was left with his attorney for comment.

Authorities said Calk committed the crime while serving as CEO of The Federal Savings Bank, a small bank headquartered in Chicago with an office in New York.

Federal prosecutors described the charge in a release, saying Calk abused his bank position by approving $16 million in high-risk loans that were ultimately downgraded by the bank’s primary regulator.

“His attempt at petitioning for political favors was unsuccessful in more ways than one — he didn’t get the job he wanted, and he compromised the one he had,” Sweeney Jr. added.

If convicted, he could face up to 30 years in prison.

Manafort lobbied Trump’s son-in-law, Jared Kushner, to consider Calk for Secretary of the Army, according to emails from the weeks leading up to the 2016 election shown to jurors at Manafort’s tax evasion and bank fraud trial last year.

According to trial evidence, Manafort passed along Calk’s resume to Kushner in a Nov. 30, 2016, email, along with two other names of people he said “should be a part of the Trump administration.”

Manafort wrote that the individuals would be “totally reliable and responsive to the Trump White House.”

He also said Calk was “strong in defense issues, management and finance.”

Kushner responded, “On it!”

Calk was formally interviewed for the position of under secretary of the Army in early January 2017 at the Presidential Transition Team’s Manhattan offices, prosecutors noted.

But Calk never got an administration post, though he did approve Manafort’s loans.

Manafort received a $9.5 million cash-out refinance from Calk’s bank on November 2016 and an additional $6.5 million construction loan on a Manafort property in New York in January 2017.

Calk himself was not summoned by federal prosecutors to testify in Manafort’s case.

Instead, executives who worked under Calk at The Federal Savings Bank testified he began green-lighting more than $16 million in loans after he expressed interest in joining the Cabinet if Trump won the 2016 election.

Testifying under an immunity agreement, James Brennan, who was a vice president of the bank at the time, said Calk overruled bank executives who rejected Manafort’s loan for “inconsistencies.”

The loan “closed because Mr. Calk wanted it to close,” Brennan said.

The federal jury was unable to reach a verdict on the bank fraud charge related to Calk, but Manafort was convicted on eight other counts in the case. Manafort later acknowledged guilt in all the bank-related charges as part of a deal with the special counsel's office.

Manafort is serving a 7½ year sentence after his convictions on 10 charges alleging multiple crimes, including bank and tax fraud, misleading the government over his foreign lobbying work and encouraged witnesses to lie on his behalf. He also faces an indictment in New York charging him with state crimes, including a residential mortgage fraud scheme.