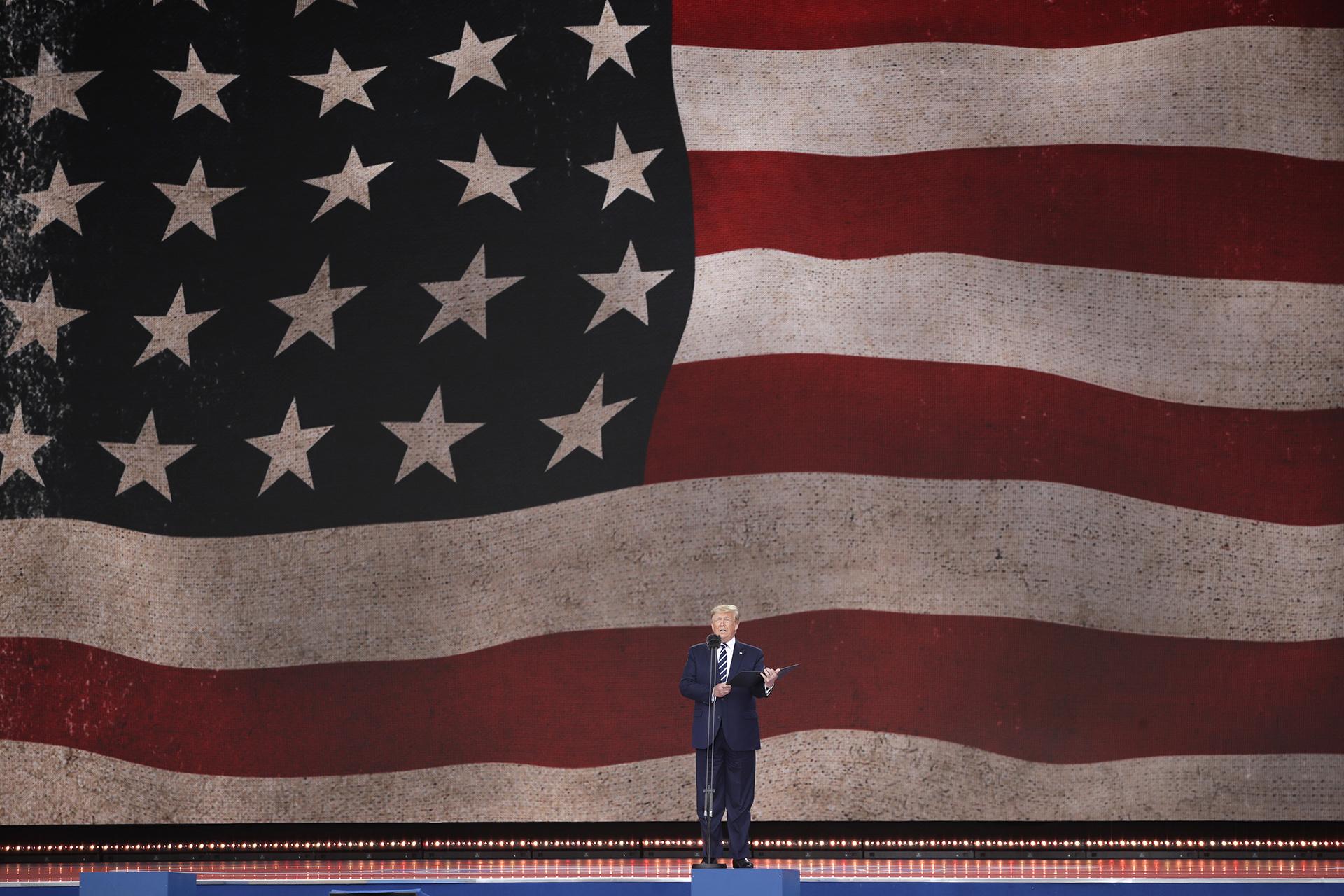 PORTSMOUTH, England (AP) — President Donald Trump read from a prayer delivered by President Franklin D. Roosevelt as he joined other world leaders and veterans Wednesday in marking the 75th anniversary of D-Day.

Roosevelt went on national radio on June 6, 1944, to address the U.S. for the first time about the Normandy invasion. Trump, with images of an American flag and Roosevelt projected behind him, read to the crowd:  “Almighty God, our sons, pride of our nation, this day, have set upon a mighty endeavor, a struggle to preserve our republic, our religion and our civilization and to set free a suffering humanity.”

Trump traveled to the southern coast of England Wednesday to pay respects to American service members and allies who helped rescue Europe from Nazi Germany. He sat in a VIP area with other world leaders and in between Queen Elizabeth II and first lady Melania Trump during the program, which focused on a telling of events leading up to D-Day. Some 300 World War II veterans also attended the seaside ceremony.

A chilly breeze blew off the English Channel as Trump arrived for the event, the first of two he is attending to mark the 75th anniversary of the day when Allied soldiers, sailors and airmen conducted an invasion that helped liberate Europe from Nazi Germany.

Trump joined in giving a standing ovation to a group of World War II vets who appeared on stage as the commemoration began.

He was the second world leader to speak, following Canadian Prime Minister Justin Trudeau in the lineup. Trump appeared on stage alone and read from a folder for about 90 seconds, reciting just an excerpt of Roosevelt's prayer.

French President Emmanuel Macron and British Prime Minister Theresa May also delivered readings. Before he began, Macron said: “First, let me thank you sincerely, on behalf of my nation” — drawing cheers from the crowd.

The queen spoke in unusually personal terms in her brief address.

“When I attended the commemoration of the 60th anniversary of the D-Day landings, some thought it might be the last such event. But the wartime generation, my generation, is resilient, and I am delighted to be with you in Portsmouth today,” she said.

After the event, Trump visited with American World War II veterans who were among Allied troops on D-Day. He was to have lunch and meet briefly with German Chancellor Angela Merkel before departing for Ireland for an airport meeting with Prime Minister Leo Varadkar and stay at his golf course in the village of Doonbeg, his first visit to the country as president.

During a news conference Tuesday in London, Trump said he is grateful for the warm welcome he received from the British royal family and prime minister. He played down protests of his visit, describing the thousands of people who demonstrated in London as a “small protest.”

Trump has used his speeches to emphasize a longstanding bond between the U.S. and Britain. He noted that more than 1.5 million Americans were stationed in England in advance of the invasion.

Trump also sought to clean up a diplomatic spat, telling “Good Morning Britain” host Piers Morgan that he meant no royal insult when he used the term “nasty” in discussing the American-born Duchess of Sussex, Meghan Markle. The phrase generated a lot of media coverage and Trump has worked diligently to explain that he was speaking specifically on her comments about him, not about her.

Trump said: “She was nasty to me. And that’s OK for her to be nasty, it’s not good for me to be nasty to her and I wasn’t.”

He said the controversy did not come up when he spoke with Markle’s husband, Prince Harry, who he says “couldn't have been nicer.”

In the interview, Trump was asked if he wished he had served in Vietnam. “Well I was never a fan of that war I’ll be honest with you. I thought it was a terrible war,” Trump said. “I thought it was very far away.”

Trump was then asked whether serving in the military generally was something he would have liked. Trump said he would not have minded at all and “I think I’m making up for it rapidly” because of increased defense spending under his presidency.

While overseas, the president’s mind also appeared to be on matters back at home. He unleashed Twitter attacks on Senate Minority Leader Chuck Schumer, former Vice President Joe Biden and even actress and singer Bette Midler. A couple of the broadsides came in about 1 a.m. local time.

After Dublin balked at holding a meeting in Doonbeg, a deal was struck for Trump and Varadkar to meet at the VIP lounge at Shannon Airport, hardly the grand setting usually afforded a meeting of world leaders.