The U.S. is lagging behind other world powers when it comes to technological innovation, and if the government doesn’t start investing more in research and development, America’s future growth will be in jeopardy.

That’s part of the case made in a new book called “Jump-Starting America: How Breakthrough Science Can Revive Economic Growth and the American Dream.” In it, co-authors and MIT economists Jonathan Gruber and Simon Johnson argue that public – rather than private – investment in science has a very big rate of return for the country and its citizens.

“I think this book is for anyone who’s been paying attention to what is happening in America,” said Johnson, the Kurtz Professor of Entrepreneurship at the MIT Sloan School of Management.

In the book, Johnson and Gruber detail the American government’s investment in research and development after World War II, noting that public spending on R&D peaked at nearly 2% of GDP in 1964.

But today, the authors say, government spending is no more than 0.7% of the nation’s economy, and as a result, there are fewer American-bred technological developments.

“Since the 1970s and 1980s, we have lost [that growth],” said Johnson. “Without a conscious decision … without a deliberate derailment of the previous model, it slipped through our fingers and we went from the greatest economic success story of all time to something that was at best problematic.”

Below, an excerpt from “Jump-Starting America.” 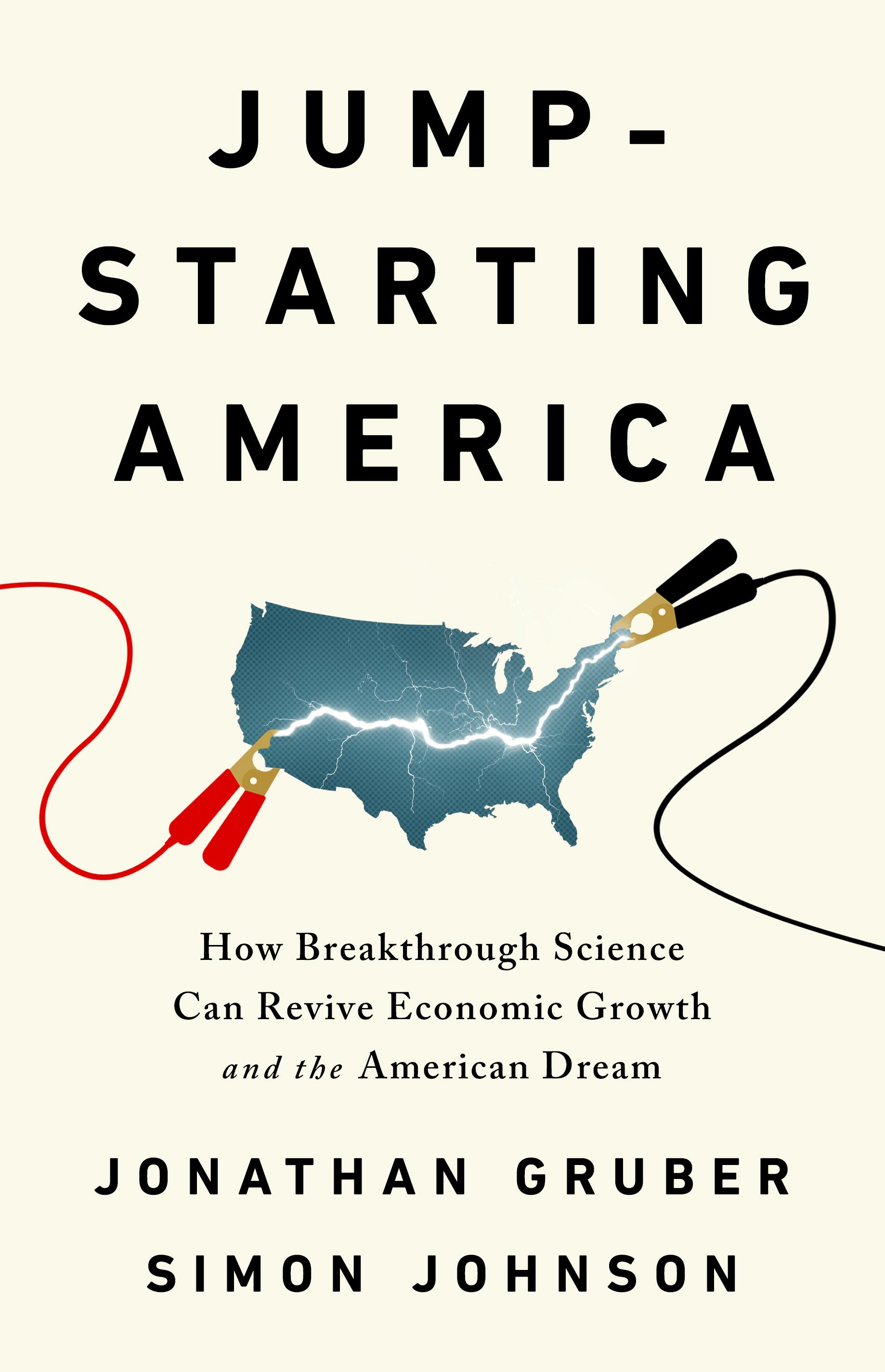 In 2017, Amazon—one of the most prominent tech companies In the world—announced it intended to build a second headquarters-type operation somewhere in North America. Amazon stated that HQ2 would hire, over ten to ﬁfteen years, as many as ﬁfty thousand employees, with “average annual total compensation” over $100,000. The company launched a public competition and gave localities just six weeks to submit bids, a very short deadline. The response was impressive: 238 cities and regions threw their hats into the ring, representing forty-three states, Puerto Rico, and the District of Columbia.

These bids reportedly included generous inducements to Amazon, including billions of dollars in tax beneﬁts, infrastructure improvements, real estate deals, and other inducements.1 There are obvious major risks involved in making expensive commitments to any ﬁrm   in a fast-changing industry, as it is hard to know who will be a large successful employer in a decade. A major investment by a company like Amazon is also not an unmixed blessing; if it drives up real estate prices and rents while undermining local public ﬁnances, it can actually worsen outcomes for some residents.

Why are so many local political and business leaders desperate to attract this number of jobs when, supposedly, the American economy is doing so well? After all, according to the White House and the Federal Reserve, the economy is close to full employment, which is oﬃcially deﬁned as meaning that everyone who wants a job now has a job, and wages are increasing. The president of the United States describes recent economic growth as “amazing,” argues that recent performance is “very sustainable,” and emphasizes, “Everywhere we look, we are seeing the eﬀects of the American economic miracle.”2

Unfortunately, these headline numbers are deeply misleading. People in many parts of the country feel they have been—or soon will be— left behind by the growing importance of technology in our economy. Millions of good jobs have been lost to automation in recent decades, particularly in manufacturing. Yes, the service sector has expanded, but too many of the new jobs pay low wages that make it diﬃcult for families to survive, let alone prosper. The low oﬃcial unemployment rate also hides the fact that many discouraged workers have given up entirely on looking for work and are therefore not included in the statistics.

As our economy recovered from the ﬁnancial crisis of 2008, some places and some people forged ahead. But many more places—meaning a large number of people—feel increasingly frustrated. This frustration felt by millions of Americans is legitimate and reﬂects the decades-long failure of policy, from both Democratic and Republican administrations, to create the conditions that foster suﬃciently rapid and shared economic growth.

Disappointment with national-level policies naturally leads to local initiatives—sometimes with support across the political spectrum—that include trying to win Amazon’s HQ2. While these local eﬀorts have positive dimensions, they can also lead to a race to the bottom that reduces local revenue and makes it harder to maintain public infrastructure, including schools. America’s communities are increasingly trapped between fear of missing out on the next generation of good jobs and undermining the essential public services that make them safe and at- tractive places to live.

It does not have to be this way. Our book is intended for everyone who is tired of the old rhetoric and willing to try something different. We aim to tap into today’s local energy for sharing economic prosperity, by proposing an update and (we hope) an improvement on the national-level policies that promoted economic growth just a few decades ago.

The United States of America has always been deﬁned by the notion of forward progress. For a long time, the engine that drove this techno- logical and economic progress was simple: innovation, through which new ideas become commercial products.

American innovation led the way in the nineteenth century for rail- roads, steel, automobiles, electricity, and radio. In the twentieth century, as science advanced, the United States strengthened its technical lead- ership: atomic power, digital computers, jet planes, microelectronics, and satellites. From 1940 through to the 1970s, it is hard to think of any signiﬁcant area of rapid technological change in which the United States did not play a formative role.

During the post–World War II boom years, a broad cross section of Americans shared in the rewards that come with being ﬁrst to market with new ideas. Across almost all groups and almost all locales, people experienced higher incomes, improved standards of living, better health, and more opportunities for their children. The United States became one of the most dynamic nations on earth, and to a substantial and unprecedented degree, much of the newly created wealth was shared around the country.

This American engine of progress and prosperity is now in serious trouble. Job-creating innovation has slowed, resulting in a stalled standard of living for the middle class. Rewards from the remaining advances have become increasingly concentrated in the hands of a small number of people living in a few big cities. What went wrong?

The private sector has always been, and will remain, key to American prosperity. However, the major—and now mostly forgotten—lesson of the post-1945 period is that modern private enterprise proves much more eﬀective when government provides strong underlying support for basic and applied science and for the commercialization of the resulting innovations.

Why is government ﬁnancing of research and development so important? Because ﬁrms are interested in innovation only to the extent that it improves their own bottom line—and not if it beneﬁts others. “Spillovers” from innovation are incredibly important, creating the basic scientiﬁc knowledge and also many of the more applied ideas that power further innovation and create jobs in all corners of the economy. But they are limited by private companies’ unwillingness to invest when they do not receive the full or suﬃcient beneﬁts from that investment. Meanwhile, ﬁnanciers who support start-ups are, understandably, reluctant to take risks on large, expensive investments with potentially distant payoﬀs—despite the fact that such investments help create the high-value-added jobs of the future.

The innovation that led to rapid growth after World War II was the direct result of a fruitful partnership between the private sector, federal government, and universities that allowed us to generate and capture these spillovers as a country. Almost every major innovation in this era relied in an important way on federal government support along the chain of its development. This support was provided by both Democratic and Republican administrations.

Unfortunately, since the late 1960s, the federal government has retreated from this leadership role because of a combination of concerns— from both the Right and the Left—including about short-term budget math and the proper role of science in society. Predictably, this retreat has coincided with a slowdown in the productivity growth that powered the postwar United States economy and boosted living standards across all income groups.

On its current course, America seems unlikely to continue its dominance of invention. Intensely innovative competitors are gaining strength around the world, in large part because other nations are doing a better job of reading American history. Government-ﬁnanced research initiatives in other nations, including China, are helping to create the technologies of tomorrow, along with the associated well-paid jobs.

America can regain the path to good jobs through innovation. In fact, we are uniquely positioned to update and apply our previous winning formula. We have the best universities in the world, along with entrepreneurs and investors who are eager to partner—as well as thousands of creative students, US born and immigrant, who want to build good companies. The American economic environment for technology entrepreneurs is good. What is missing?

All we need, in our view, is a more strategic view regarding how government can expand on its role as a catalyst for private enterprise. The post-1945 years, with tweaks to reﬂect modern realities, show us how this can be done.

But the politics of recent decades teach us another lesson—the beneﬁts must be shared more widely across society. There are many geo- graphic areas with the potential for innovative success, with resources ranging from strong educational institutions to entrepreneurial residents. A serious plan to jump-start the American growth engine must focus on all these places of opportunity.

In early November 2018, Amazon announced its much-awaited HQ2 decision. The projected jobs will be split between two locations: Crystal City (now rebranded as National Landing), part of Arlington, in Northern Virginia, across the Potomac River from Washington, DC; and Long Island City, in the borough of Queens, across the East River from Manhattan, New York City. In other words, the “winners” are two of the most economically successful regions of recent decades and places that both already have plenty of good jobs. The potential for Amazon to transform lagging communities remains unfulﬁlled.3

The lesson from the HQ2 bidding experience is clear. Established big tech companies, left to their own devices, will bring a signiﬁcant number of good jobs—along with congestion, high house prices, and perhaps even more inequality—to a small set of already successful cities, most of which are located on the East or West Coast.

This book is for everyone else.