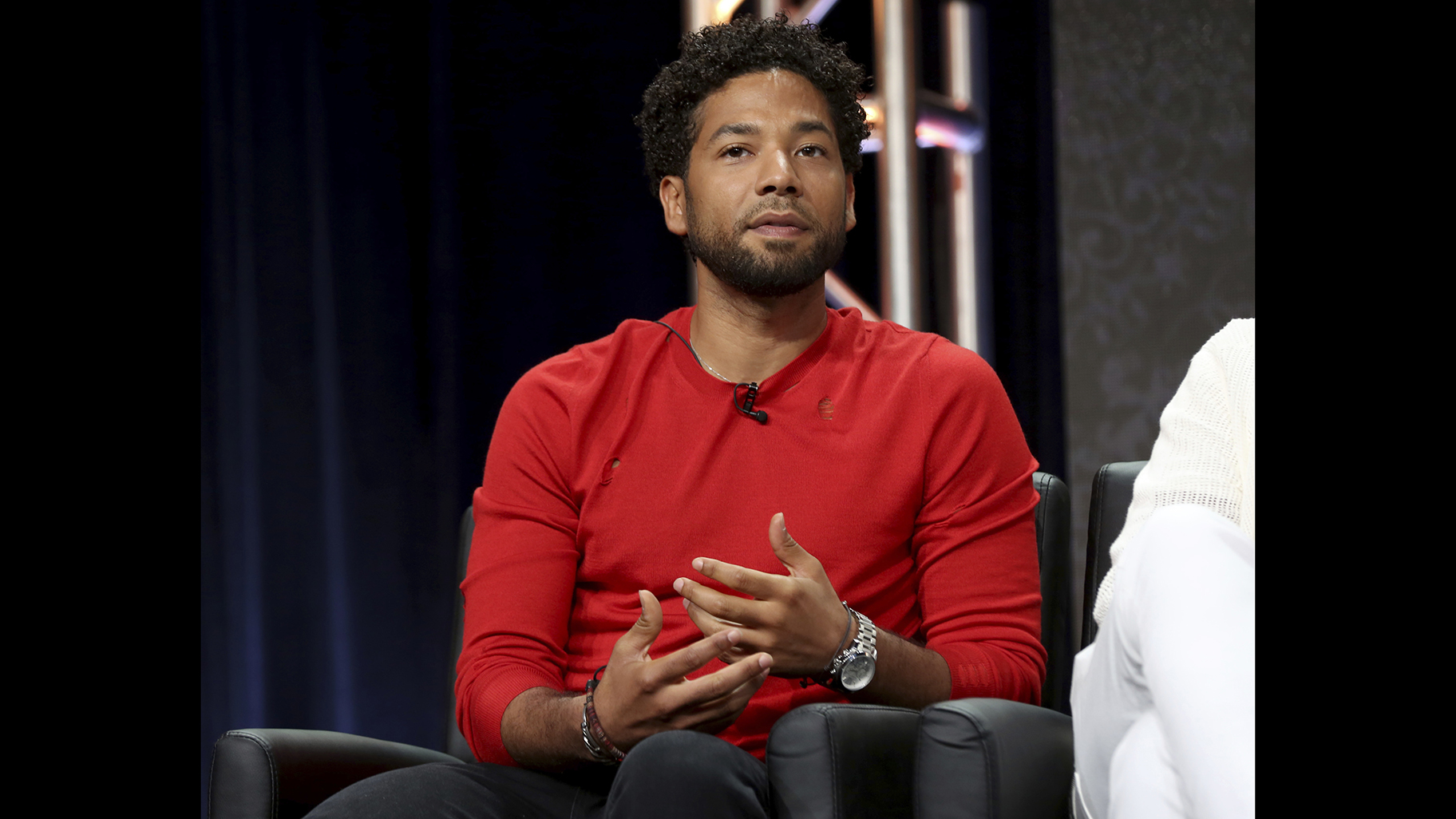 CHICAGO (AP) — “Empire” actor Jussie Smollett turned himself in early Thursday to face accusations that he filed a false police report when he told authorities he was attacked in Chicago by two men who hurled racist and anti-gay slurs and looped a rope around his neck, police said.

Smollett turned himself in at central booking and was arrested, Chicago police spokesman Anthony Guglielmi said. Chicago police Superintendent Eddie Johnson was scheduled to hold a Thursday morning news conference, and Smollett was expected to appear in court later in the day. Police haven’t described a motive.

The whispers about Smollett’s account started with reports that he had not fully cooperated with police after telling authorities he was attacked. Then detectives in a city bristling with surveillance cameras could not find video of the beating. Later, two brothers were taken into custody for questioning but were released after two days, with police saying they were no longer suspects.

Following three weeks of mounting suspicions, Smollett was charged Wednesday with felony disorder conduct, a charge that could bring up to three years in prison and force the actor, who is black and gay, to pay for the cost of the investigation into his report of a Jan. 29 beating.

In less than a month, the 36-year-old changed from being the seemingly sympathetic victim of a hate crime to being accused of fabricating the entire thing.

The felony charge emerged on the same day detectives and the two brothers testified before a grand jury. Smollett’s attorneys met with prosecutors and police, but it was unknown what they discussed or whether Smollett attended the meeting.

In a statement, attorneys Todd Pugh and Victor Henderson said Smollett “enjoys the presumption of innocence, particularly when there has been an investigation like this one where information, both true and false, has been repeatedly leaked.”

The announcement of the charges followed a flurry of activity in recent days, including lengthy police interviews of the brothers, a search of their home and their release after officers cleared them.

Investigators have not said what the brothers told detectives or what evidence detectives collected. But it became increasingly clear that serious questions had arisen about Smollett’s account — something police signaled Friday when they announced a “significant shift in the trajectory” of the probe after the brothers were freed.

Smollett, who plays a gay character on the hit Fox television show “Empire,” said he was attacked Jan. 29 as he was walking home from a downtown Subway sandwich shop. He said the masked men beat him, made derogatory comments and yelled “This is MAGA country” — an apparent reference to President Donald Trump’s campaign slogan, “Make America Great Again” — before fleeing.

Earlier Wednesday, Fox Entertainment and 20th Century Fox Television issued a statement saying Smollett “continues to be a consummate professional on set” and that his character is not being written off the show. The series is shot in Chicago and follows a black family as they navigate the ups and downs of the recording industry.

The studio’s statement followed reports that Smollett’s role was being slashed amid the police investigation.

After reviewing hundreds of hours of video, detectives did find and release images of two people they said they wanted to question and last week picked up the brothers at O’Hare International Airport as they returned from Nigeria. Police questioned the men and searched their apartment.

The brothers, who were identified by their attorney as Abimbola “Abel” and Olabinjo “Ola” Osundairo, were held for nearly 48 hours on suspicion of assaulting Smollett.

The day after they were released, police said the men provided information that had “shifted the trajectory of the investigation,” and detectives requested another interview with Smollett.

Police said one of the men had worked on “Empire,” and Smollett’s attorneys said one of the men is the actor’s personal trainer, whom he hired to help get him physically ready for a music video. The actor released his debut album, “Sum of My Music,” last year.

Smollett was charged by prosecutors, not the grand jury. The police spokesman said the brothers appeared before the panel to “lock in their testimony.”

Speaking outside the courthouse where the grand jury met, the brothers’ attorney said the two men testified for about two and a half hours.

“There was a point where this story needed to be told, and they manned up and they said we’re going to correct this,” Gloria Schmidt said.

She said her clients did not care about a plea deal or immunity. “You don’t need immunity when you have the truth,” she said.

She also said her clients received money from Smollett, but she did not elaborate.

Smollett has been active in LBGTQ issues, and initial reports of the assault drew outrage and support for him on social media, including from Sen. Kamala Harris of California and TV talk show host Ellen DeGeneres.

Referring to a published account of the attack, President Donald Trump told reporters at the White House that “it doesn’t get worse, as far as I’m concerned.”

But several hours after Smollett was declared a suspect and the charges announced, there was little reaction from celebrities online.

Former Cook County prosecutor Andrew Weisberg said judges rarely throw defendants in prison for making false reports, opting instead to place them on probation, particularly if they have no prior criminal record.

Smollett has a record — one that concerns giving false information to police when he was pulled over on suspicion of driving under the influence. According to records, he was also charged with false impersonation and driving without a license. He later pleaded no contest to a reduced charge and took an alcohol education and treatment program.

Another prospective problem is the bill someone might receive after falsely reporting a crime that prompted a nearly monthlong investigation, including the collection and review of hundreds of hours of surveillance video.

The size of the tab is anyone’s guess, but given how much time the police have invested, the cost could be huge.

Weisberg recently represented a client who was charged with making a false report after surveillance video discredited her account of being robbed by three men at O’Hare Airport.

For an investigation that took a single day, his client had to split restitution of $8,400, Weisberg said. In Smollett’s case, “I can imagine that this would be easily into the hundreds of thousands of dollars.”