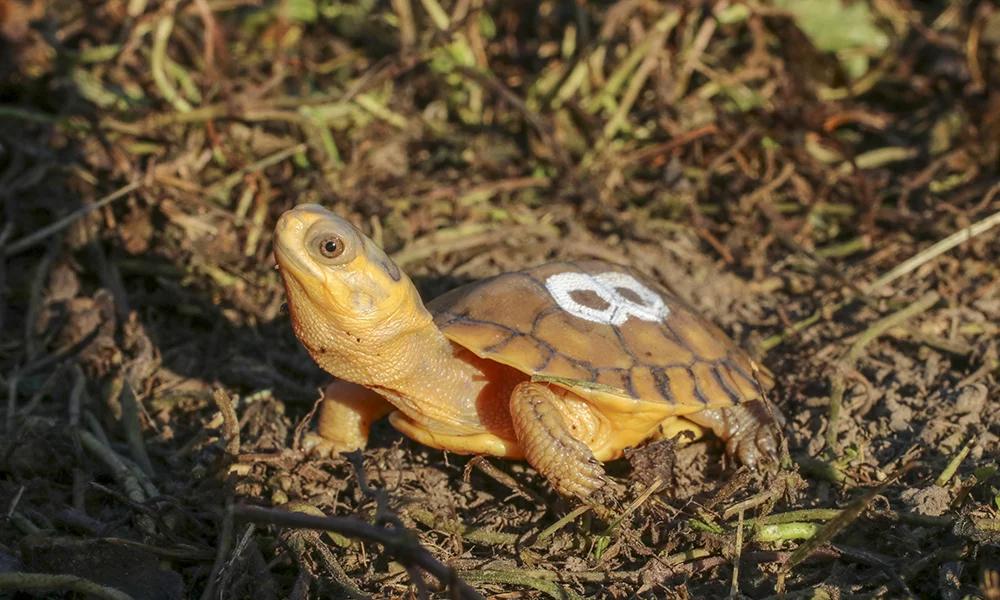 Shirlee, a Blanding’s turtle, as a new hatchling in 2017 (Courtesy Forest Preserve District of DuPage County)

A special Blanding’s turtle who called Chicago home has moved out to the suburbs, where she’s helping to spread the word about the plight of her endangered species throughout Illinois.

Lucy, as she was named originally, arrived at Chicago’s Peggy Notebaert Nature Museum in August 2017 as a week-old hatchling. Although most Blanding’s turtles are dark with a yellow throat and yellow specks on their shells, Lucy’s entire body and shell are yellow, the result of a genetic condition that is likely a mutation.

Because of the condition, which makes her stand out to predators – and to illegal poachers in the wild – Lucy was kept behind the scenes in the museum’s Look-in Lab.

Last week, however, the turtle was transferred to a new home at the Isle a la Cache Museum in Romeoville.

The turtle’s move came about after she was adopted by Dan Thompson, an ecologist with the Forest Preserve District of DuPage County, which more than two decades ago launched a program to help preserve the species, which is classified as endangered in Illinois. 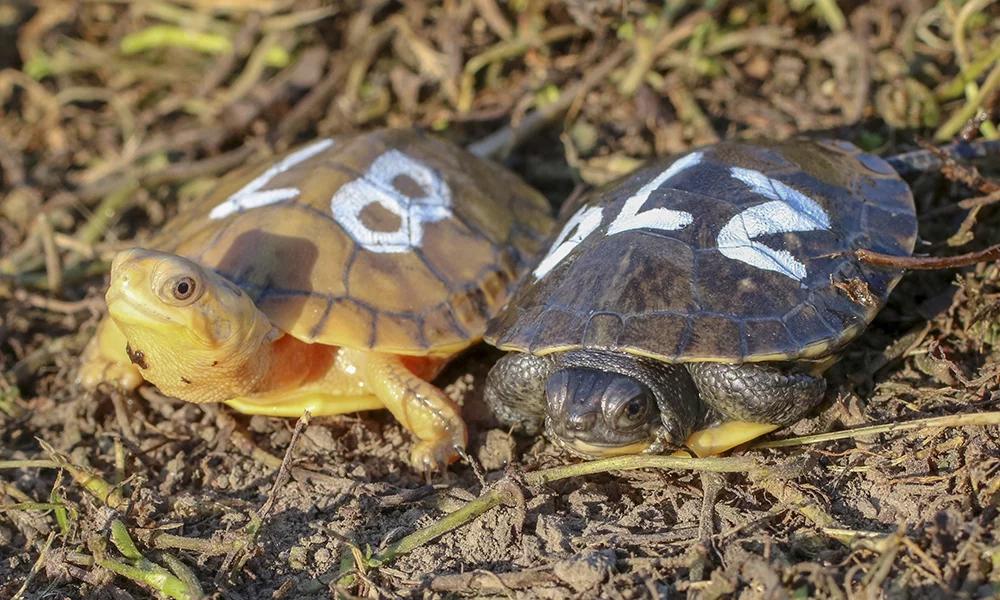 Thompson renamed the turtle Shirlee in honor of his late mother-in-law, who was fond of the special yellow-hued turtles, he said in a blog post about the turtle’s move.

Shirlee is now on display at the Isle a la Cache Museum.

“Shirlee may take a little time to come out of her shell (pardon the pun) before she is settled and comfortable in the display,” Thompson said in the blog post. “She may spend a lot of time hiding until she adjusts.”

Although Blanding’s turtles are native to the northern half of Illinois, the species had in recent years experienced a sharp decline in population – caused by habitat destruction, predation and harvesting for the pet trade – making it increasingly likely that the turtles would go extinct without assistance from conservationists.

Since the start of the Blanding’s turtle “head-start” program in 1996, the Forest Preserve District has hatched nearly 3,300 turtles, which are eventually released into the wild at protected locations.

Over the program’s 23 years, only nine turtles have been born with Shirlee’s genetic condition, according to the Forest Preserve District. Of those, just three have survived more than a year. 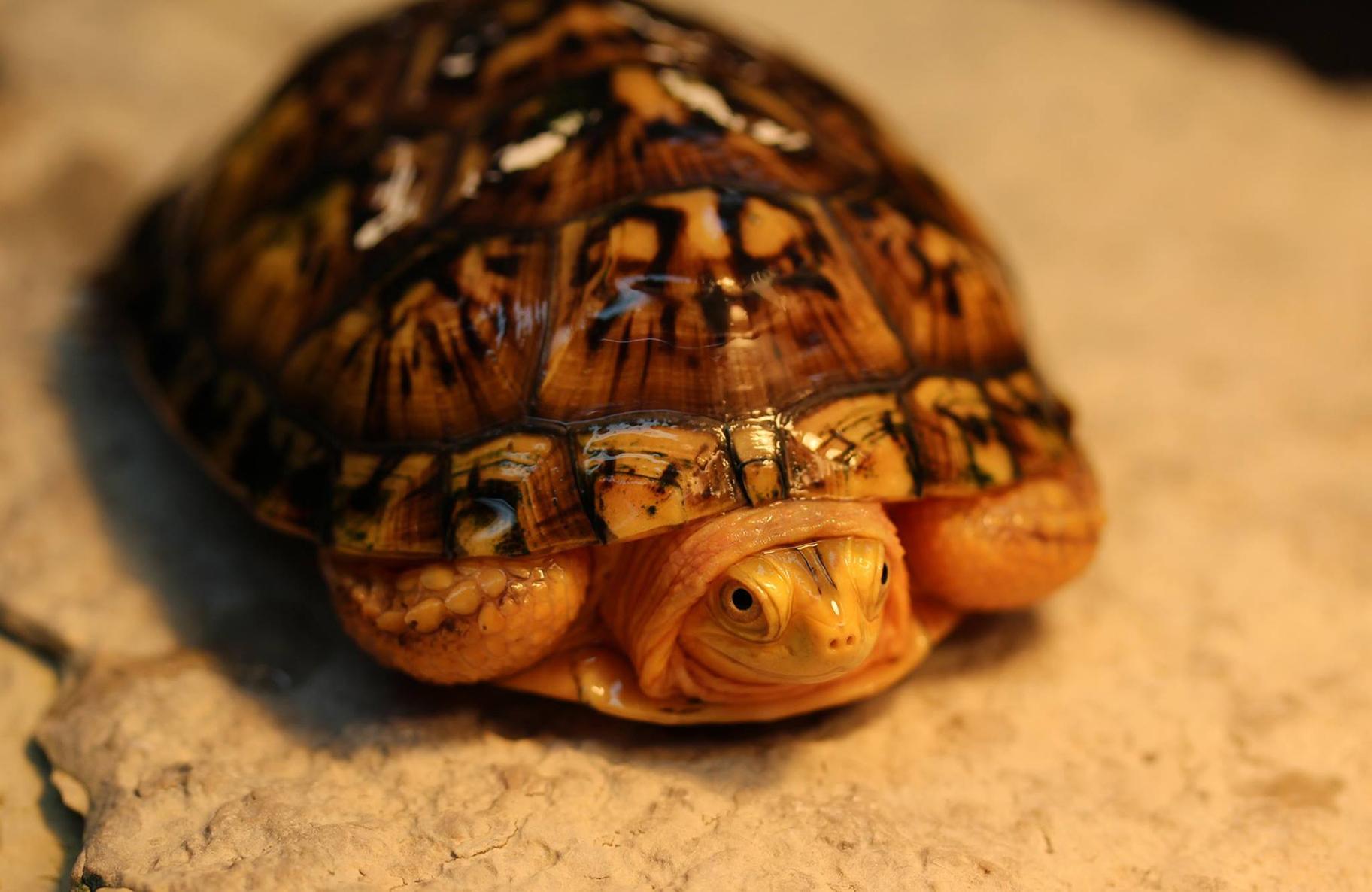 Shirlee, who was originally named Lucy, is a Blanding’s turtle with a rare genetic condition that gives her a yellow hue. (Courtesy Peggy Notebaert Nature Museum)

Because her bright coloring makes her a rather easy target for predators and poachers, Shirlee is not expected to be released back into the wild (though her shell will darken as she ages). But by being on display for the public, she will serve as a needed ambassador for her species, which continues to face threats.

More than 90 percent of Blanding’s turtle nests are destroyed by predators during each egg’s 60-day incubation period, according to the Forest Preserve District.

Through its head-start program, the organization aims to improve the Blanding's turtles chances of survival by collecting pregnant female turtles from wetlands and marshes in DuPage County forest preserves before they lay eggs in the spring. The eggs are then incubated at the Forest Preserve District’s Urban Stream Research Center in Warrenville.

After the eggs hatch, the turtles are hand-reared for about a year before staff release them back into the wild.

To carry out the program, the Forest Preserve District works with a handful of other institutions in the Chicago area. That group includes Shedd Aquarium, which is hosting two dozen Blanding’s turtles for one year until they are big enough to be released.

“It’s a monumental undertaking to bring a species back from the brink of extinction,” Thompson said in the blog post. “We’ve been able to do so much more with our partnerships, something we could not do on our own.”