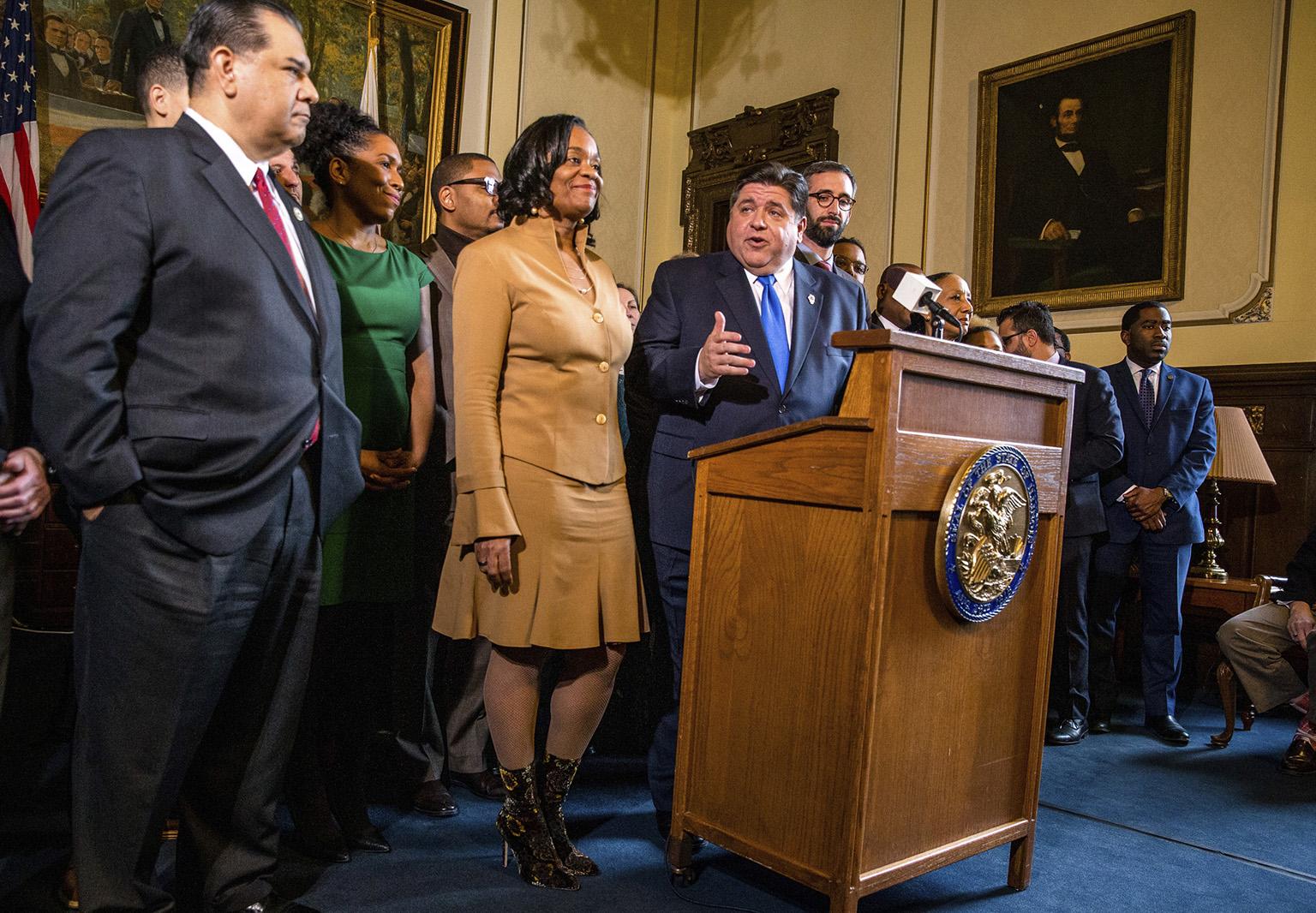 Gov. J.B. Pritzker gives his opening remarks along with state Sen. Kimberly Lightford, D-Maywood, left, on Senate Bill 1, a bill sponsored by Lightford to raise the state’s minimum wage to 5 an hour by 2025, after it passed the Illinois Senate during a press conference in the governor’s office at the Illinois state Capitol, Thursday, Feb. 7, 2019. (Justin L. Fowler / The State Journal-Register via AP)

SPRINGFIELD, Ill. (AP) — The Illinois Senate voted Thursday to hike the statewide minimum wage to $15 an hour within six years, quickly advancing a top campaign promise of the newly elected Democratic governor in a major industrial state that hasn’t raised the pay floor in nearly a decade.

Gov. J.B. Pritzker, who in his third week in office has reveled in reversing four years of his Republican predecessor’s conservative policies, lauded the Senate’s 39-18 party-line action to gradually raise the pay for low-income workers.

“If you live in this state and put in a hard day’s work, you should be able to afford to put a roof over your head and food on the table,” Pritzker told reporters in his Capitol after the vote.

Although Chicago in 2014 imposed its own wage minimum, which increases to $13 this year, the last statewide bump came in 2010. At $8.25 per hour, Illinois is $1 higher than the federal minimum wage, according to the National Conference of State Legislatures. While 16 states are at the federal level or lower — including Pennsylvania and Texas — states such as California, Washington, New York, Maine and Arizona are at $11 or more with increases scheduled in a dozen states.

The plan by Senate Majority Leader Kimberly Lightford, a Democrat from the Chicago suburb of Maywood, would bump Illinois’ $8.25-an-hour minimum to $9.25 on Jan. 1. After a 75-cent increase on July 1, 2020, the wage would increase by $1 each January until 2025.

The House, also dominated by Democrats, still must sign off before the legislation reaches Pritzker.

Republicans and key business groups have opposed the hike, fearing increased costs would be prohibitive not only for the private sector. But for taxpayer-financed institutions such as universities and social-service providers dependent on Medicaid funding, Pritzker promised the budget he’ll unveil later this month will cover the added costs.

The Illinois Retail Merchants Association is pressing for a tiered scale — a top wage for Chicago and less in regions with lower costs of living. New York and Oregon have recently adopted such approaches.

Pritzker told Democratic lawmakers that he wants to sign a $15 plan into law before he proposes his budget. Standing next to the governor Thursday, Chicago Democratic Rep. Will Guzzardi predicted success as the legislation moves to the House.

Pritzker defended claims that the increase would lift low-wage workers out of poverty. Lightford herself quoted statistics that subsistence for a single person in Illinois requires $15 an hour right now and more than $23 to support a child. The governor said wage growth also depends on the economic expansion he promises.

“It’s not just the minimum wage that raises peoples’ wages, you know,” Pritzker said. “It’s also the competition for labor and making sure that we have more jobs available.”

The legislation attempts to soften the cost-increase landing with the phased-in approach, which businesses say is still too quick. There’s also an employer withholding-tax credit for businesses with 50 or fewer workers, which begins at 25 percent and drops until only the smallest businesses can still use it after 2025.

Republican Sen. Dale Righter, from the eastern Illinois city of Charleston, said nearly three in five Illinois businesses are near a state line, such as Indiana, where he predicted business flight to a $7.25 minimum wage.

Sen. Jason Barickman, a Bloomington Republican representing Illinois State University, said the school would face a $600,000 payroll increase for as many as 5,000 students it puts to work.

“Those student workers get no benefit from a wage increase if they don’t have a job,” Barickman said.

Illinois Democrats Poised to Raise Minimum Wage to $15 by 2025