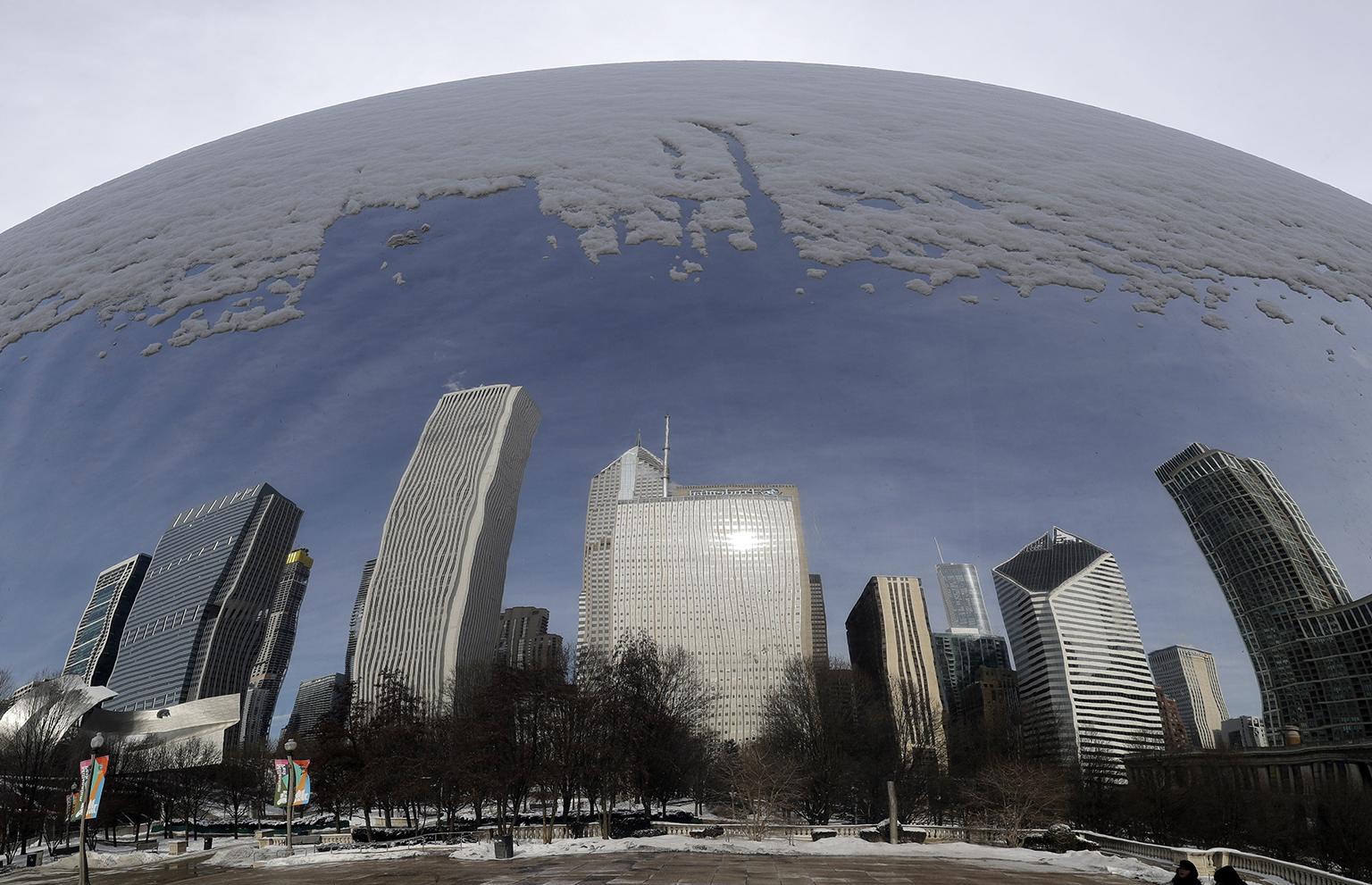 BISMARCK, N.D. (AP) — A deadly arctic deep freeze enveloped the Midwest with record-breaking temperatures on Wednesday, triggering widespread closures of schools and businesses, and the canceling of more than 1,500 flights from Chicago's airports. The cold even prompted the U.S. Postal Service to suspend mail delivery to a wide swath of the region.

Many normal activities shut down and residents huddled inside as the National Weather Service forecast plunging temperatures from one of the coldest air masses in years. The bitter cold is the result of a split in the polar vortex that allowed temperatures to plunge much further south than normal.

In Chicago, temperatures were still dropping after plunging early Wednesday to minus 19 degrees, breaking the day's previous record low set in 1966. Snowplows were idled overnight in southwestern Minnesota, where temperatures dropped to negative 29 degrees. And the temperature in Fargo, North Dakota, was 31 degrees below zero.

Officials throughout the region were focused on protecting vulnerable people from the cold, including the homeless, seniors and those living in substandard housing. Some buses were turned into mobile warming shelters to help the homeless in Chicago.

Governors in Illinois, Wisconsin and Michigan declared emergencies as the worst of the cold threatened on Wednesday. In Chicago, major attractions closed because of the bitter cold, including the Lincoln Park Zoo, the Art Institute and the Field Museum.

“These (conditions) are actually a public health risk and you need to treat it appropriately,” Chicago Mayor Rahm Emanuel said Tuesday. “They are life-threatening conditions and temperatures.”

A wind chill of minus 25 can freeze skin within 15 minutes, according to the National Weather Service.

In Michigan, homeless shelters in Lansing were becoming “overloaded,” Mayor Andy Schor said. They also were filling up in Detroit.

“People don't want to be out there right now,” said Brennan Ellis, 53, who is staying at the Detroit Rescue Mission Ministries.

Detroit's outlook was for Wednesday overnight lows around minus 12, with wind chills dropping to minus 35.

At least four deaths were linked to the weather system Tuesday, including a man struck and killed by a snow plow in the Chicago area, a young couple whose SUV struck another on a snowy road in northern Indiana and a Milwaukee man found frozen to death in a garage.

A popular saying goes: “Neither snow nor rain nor heat ...” will stop the mail from being delivered. But extreme cold will on Wednesday.

Hawaii native Charles Henry, 54, was staying at a shelter in St. Paul, Minnesota, and said he was grateful to have a place to stay out of the cold.

“That wind chill out there is not even a joke,” he said. “I feel sorry for anybody that has to stay outside.”

Chicago was turning five buses into makeshift warming centers moving around the city, some with nurses aboard, to encourage the homeless to come in from the cold.

“We're bringing the warming shelters to them, so they can stay near all of their stuff and still warm up,” said Cristina Villarreal, spokeswoman for the city's Department of Family and Support Services.

Shelters, churches and city departments in Detroit worked together to help get vulnerable people out of the cold, offering the message to those who refused help that “you're going to freeze or lose a limb,” said Terra DeFoe, a senior adviser to Detroit Mayor Mike Duggan.

Hundreds of public schools and several large universities from North Dakota to Pennsylvania canceled classes Tuesday or planned to do so Wednesday.

American Indian tribes in the Upper Midwest were doing what they could to help members in need with heating supplies. The extreme cold was “a scary situation,” because much of the housing is of poor quality, said Chris Fairbanks, energy assistance program manager for the White Earth Band of Ojibwe in Minnesota.

The cold weather was even affecting beer deliveries, with a pair of western Wisconsin distributors saying they would delay or suspend shipments for fear that beer would freeze in their trucks.

But it wasn't stopping one of America's most formidable endurance tests, however — the three-day Arrowhead 135 was going on as scheduled in northeastern Minnesota. Competitors can cover the race route by bicycle, cross-country skis or just running.

The cold is attributed to a sudden warming far above the North Pole. A blast of warm air from misplaced Moroccan heat last month made the normally super chilly air temperatures above the North Pole rapidly increase. That split the polar vortex into pieces, which then started to wander, said Judah Cohen, a winter storm expert for Atmospheric Environmental Research.

One of those polar vortex pieces is responsible for the subzero temperatures across the Midwest this week.