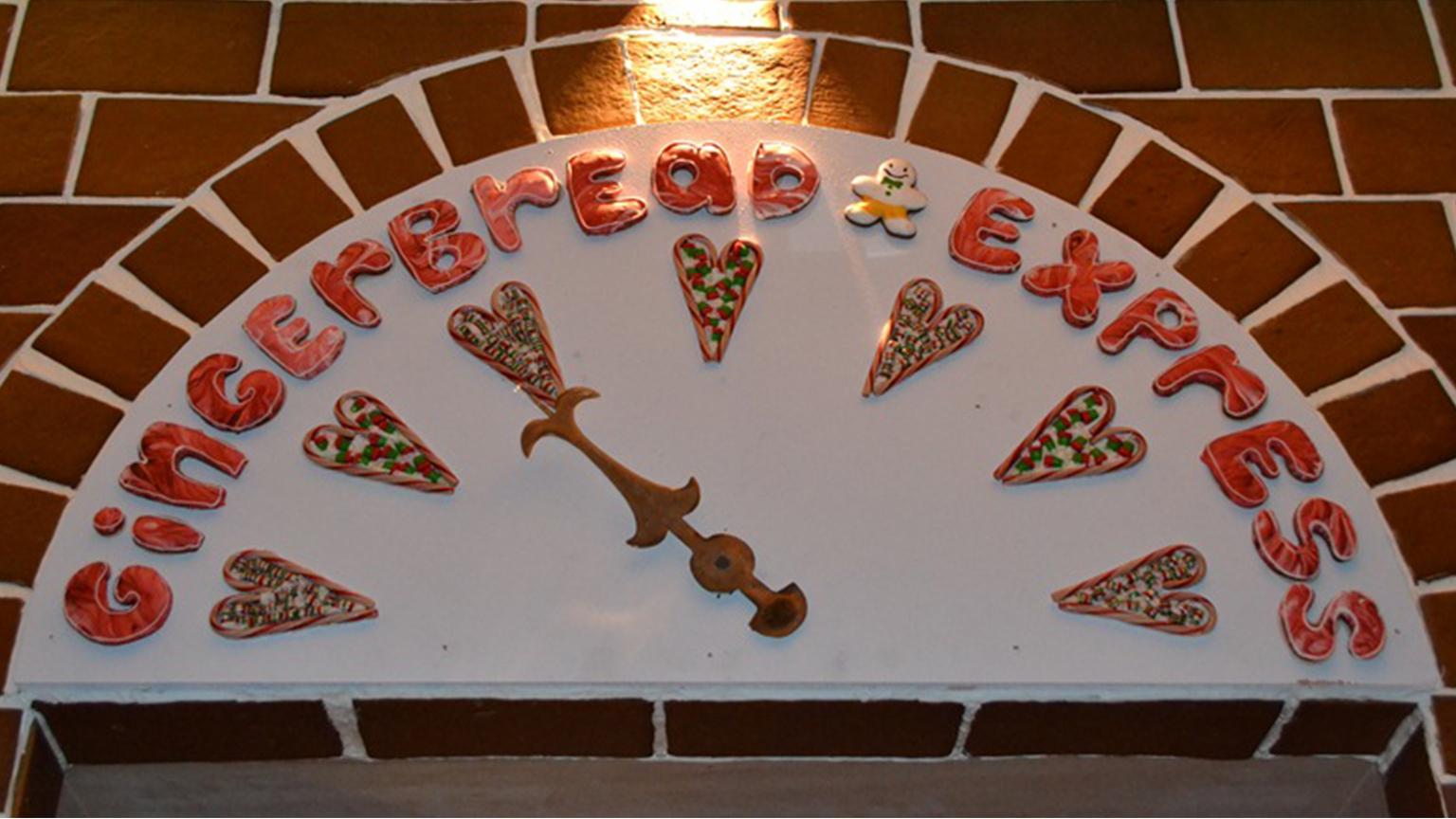 The Trump Hotel Chicago transforms one of its elevators into the Gingerbread Express each holiday season. Pictured is the 2015 elevator. (Kristen Thometz / Chicago Tonight)

Gingerbread cookies and houses are synonymous with Christmas. The Trump Hotel Chicago takes the seasonal staple to the next level with the Gingerbread Express—an elevator dressed head to toe in gingerbread.

The idea for the elevator was cooked up in 2012 by a pastry assistant and a hotel manager “who wanted to do something on a grand scale,” said Aya Fukai, executive pastry chef at the Trump Chicago, in a 2015 interview.

“One pastry assistant at that time—before I was here—suggested the idea of a gingerbread house like the one the Ritz Carlton does where they used to work,” Fukai said. “The hotel manager, being the character that they are, said, 'Let’s do something else. Let’s do something completely new just for this hotel.'”

And with that, the Gingerbread Express was born. Every year since then, the elevator that takes hotel guests up to the restaurant Sixteen has been transformed into a giant gingerbread creation.

This year’s elevator was envisioned up by executive pastry chef Jared Bacheller and brought to life by pastry sous chef Bri Maxeiner and the hotel’s culinary team. See a video below.

Gingerbread Express by the Numbers

How much flour, sugar and ginger does it take to turn the elevator into the Gingerbread Express?

Below, a rough estimate of the ingredients used.

As for the time it takes to bake, decorate and install the Gingerbread Express?

Preparation for the holiday elevator begins in September.

“We start baking bricks in September, so it’s a gradual process rather than a one whole day thing,” Fukai said, adding the staff has to attend to their daily duties at the hotel as well.

“We mix the dough, sheet the dough, cut the dough and bake the dough,” she said. “We’re not a factory, so we don’t have a super large mixing bowl. We do 10-12 batches to make about 800 pieces. As you can imagine that takes up a lot of time and space.”

By Nov. 1, approximately 800 5-by-10-inch gingerbread bricks have been made, and at this time “we go in to the detailed pieces and make them a little more special,” Fukai said. “The stained glass [gingerbread bricks] are cut with cookie cutters and the holes are filled with colored candy sugar.

“There are chocolate rocks that surround the fireplace. Also, we have sprayed tiles. We spray them with cocoa butter with stencils to make it look like there are snowflakes. All of the detailed little pieces are done little by little before we get to the actual build out for it." 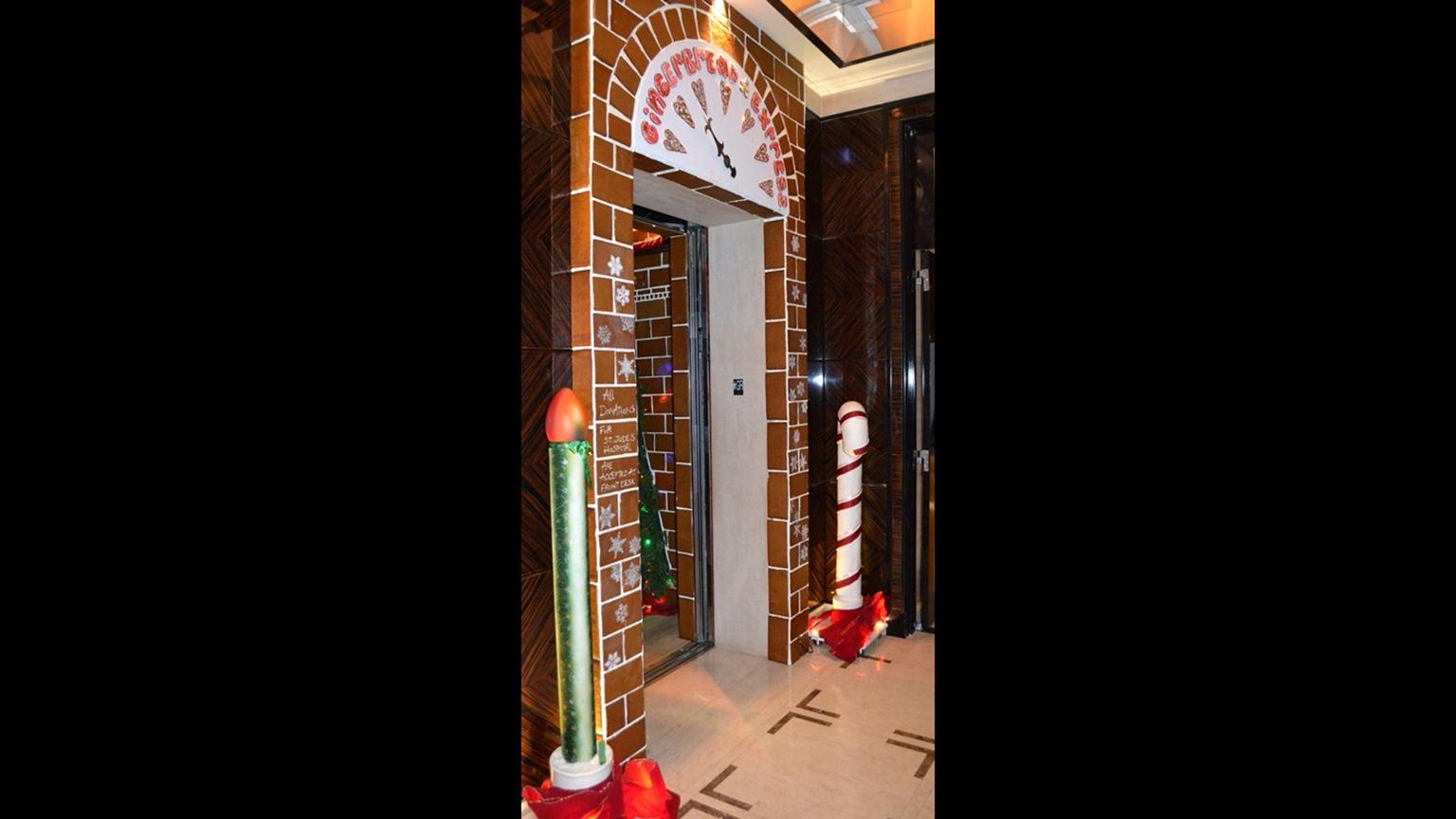 Before Fukai and her team can work their magic transforming the elevator into a delicious work of art, the Trump’s engineering team must work theirs.

“The engineering team goes in there and builds a plywood wall inside of the elevator for us to glue the gingerbread bricks to,” she said.

Another person takes care of the electricity inside the elevator, including installing the lights around the window, the LED lights for the stained glass gingerbread bricks, the electrical toy train that runs along the top of the elevator and the TV showing a fireplace.

Once all the engineering is complete, Fukai and her team get to work about two weeks before the Gingerbread Express is scheduled to open.

“Each brick is laid by hand one-by-one starting at the floor. I watched a bunch of YouTube videos to learn how to tile a bathroom. It’s very similar except for the fact that the bricks are not completely the same size as the bathroom tile,” she said. “They are hand-cut and baked, so they have a little difference, although we try to make them the same. We use spacers to make sure each and every space between the bricks on the top and sides are the same. That way gravity doesn’t give and start sinking the bricks because of the spacers. Once it all dries, we pull out the spacers and fill each cavity with frosting.”

“We do the lobby level in three days at the very end, and it’s the same process,” Fukai said. "It feels really good once it’s done. We know there’s going to be all of these kids and even adults who want to be kids inside and want to go on the elevator. ... I think it’s kind of like a Christmas punch in your face. You can’t get any more Christmas than this because you’re surrounded by it."

While the elevator is free to ride, the Gingerbread Express aims to raise awareness and donations for St. Jude Children’s Research Hospital.

“All of this is to shed a light on St. Jude’s which is a group that we support and the Eric Trump Foundation in the hopes of people being generous and in the Christmas spirit. That’s why we link to the St. Jude’s donation, and all donations are accepted at the front desk,” Fukai said.

Enjoy the sights and smells of the elevator through the end of the year.

Note: This story was originally published on Dec. 14, 2015. It has been updated.

From a Busy Suburban Kitchen, Sisters Make Lunches for Homeless