“The Lake on Fire” is Brown’s first-ever historical novel – and her first novel in nearly 18 years.

“I kind of lost faith in this novel from time to time,” Brown said. “I’ve never showed my work to anybody besides my husband, but in this case – maybe it was a mistake – I showed it to a few people, one of them was my agent. This was an earlier version, granted – and she just said, ‘Oh, I can’t send this to your editor, it will just depress him.’

“Thinking about it now, maybe it’s because the first pages are depressing,” Brown said with a laugh. “But I think she didn’t like it. And so I put it away and I took it out, and finally I showed it to the right friend, who said, ‘I think this book has a lot of promise.’”

“The Lake on Fire” is set during the time of the Columbian Exposition and tells a narrative of Jewish immigrant farmers on a failing Wisconsin farm drawn to the sights, sounds and smells of Gilded Age Chicago.

Aside from writing multiple novels, essays and poetry, Brown also teaches writing as an adjunct professor at the School of the Art Institute of Chicago. She joins us in discussion.

Below, an excerpt from “The Lake on Fire.”

For all the years of her life, this was the story Chaya-Libbe told. 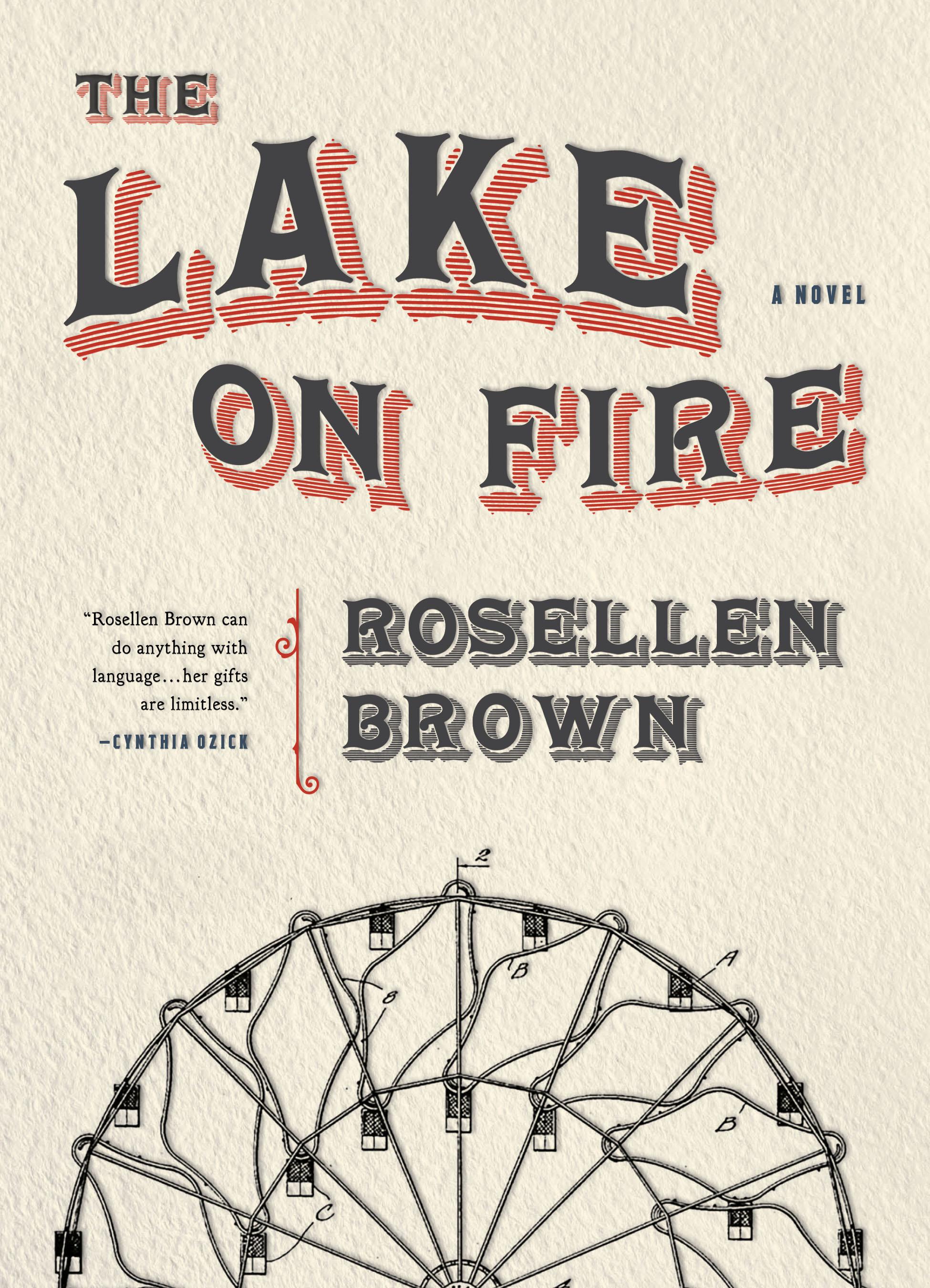 There were many brothers and sisters Shaderowsky but Chaya-Libbe loved Asher best, a thousand times best.  He was her only vanity.  She was the oldest sister; between them there were six -- Yakov, Beryle, Binyomin, Yitzhak, Dvorele, and Masha – and, in two different graveyards, the large one there, in Zhitomir, and the fresh one here, in Christa, Wisconsin, a few more, souls shaken out of them like seeds from a burst pod, early or late.

The children’s mother was brusque to them all, so busy they remembered her mainly as motion – sewing, darning, cooking, planting, sweeping – all the ing words, her hands flashing faster than barn swallows.  There wasn’t much left of her for loving, although they knew that the motion was somehow meant for them.  Chaya was the one who, back in the grim city where they were born, caught Asher’s first word – two words, actually, spoken clearly at six months, while their mother dozed over his nursing:  “It’s curdled.” Or so her mother heard it.

“Curdled?” she gasped back at him, rudely awakened. Her nipple, abandoned, quivered like a lip before tears. “Shoyn!”  Finished.

Chaya tried to console her mother.  “Mother,” she whispered, looking regretfully at the basket into which her baby brother had been thrust to quell his thirst alone. “Mother, sweet.”  Which she was not.  “Little Mama.”  But she saw the way the affront misted her mother’s eyes.  Who was this Asher, stranger than any of her other children?

He was the most curious child who ever lived, Chaya understood, and he became, early, early, a little mill for grinding words into questions, a memorizer, a challenger, a declarer;  it was not her mother’s imagination that he seemed to have been born talking.  He was never still and never silent.  “Gay avek!” she would shout at him – “Go away!” – and swat at him as if he were a horsefly.  Silent herself, Chaya was glad to give him her ear.  She loved them both.

So, in a single gesture, Asher had been weaned, and, in spite of Chaya’s placating murmur, his mother never forgave him.  He seemed to have slipped between this year’s pages of who-shall-live and who-shall-die as a special case, larger than mere life, exempt from all that burdened the rest of them into ordinariness.

And now they lived in a place called Christa in the state of Wisconsin.  A joke, such a name for a pack of disheveled Jews, some of whom swayed and prayed, others of whom blasphemed.  The pathetic piece of land they lived on, seventeen of them before the addition of any new life or the subtraction of old, had been assigned by the powers of the Hebrew Emigrant Assistance Society.   With the best of intentions and a dangerous optimism, the Association’s clerks moved pins randomly  on their map as the hordes poured by the thousands out of the Pale, ahead of (or behind) the pogroms, the empty stomachs, the laws and the threats and the curses. Undoubtedly they looked at their maps with satisfaction: they were not making exiles, they were making Americans.

And then it all closed in on her.

Her mother, who should have known her better, abandoned her to an idea, and, already far from her best self, she had to fight to keep herself recognizable.  Mother and her good friend Fraydl became conspirators to marry her off.

The boy was a recent arrival, Fraydl’s nephew, who showed up unannounced one hot August, having begged a ride with a neighbor who was heading past their turn-off in his wagon. With his eyes he raked the girls where they sat in the too- warm Commons in relative undress idly gossiping.  Not that there was such a thing as undress, only the chance to suspend a few layers of bombazine and country cotton to roll up their sleeves and unbutton their collars.

The nephew’s move to America had actually been trumpeted in a letter from Fraydl’s sister more than a year ago, and now that he had finally arrived, exhausted, from too many adventures, Chaya could see a dangerous look erupt like a sudden rash across Fraydl’s face.  How efficient it would be to fold this boy right into the batter, whatever he might or might not contribute to its flavor.

He was a tall, pale, ghostly-looking young man, Shimmie – Chaya had the feeling that she could run the palm of her hand right through him the way you could through a candle flame. His eyes were colorless, his skin the gray of fish just slightly too long out of water, his shoulders narrow and sloping: apologetic.  Something about his frailty made her want to pinch him.  How could he have done the things he reported?  Possibly, she thought, as generously as she could, he had been starving and would, like a flower in dry soil, revive with a rain of attention.  He looked famished for warmth and moisture, and for the sun, and there they sat, girls in their summer dresses, loose-haired, returning his gaze because they were so tired of each other’s. Their lives had slowed to a dull drip, nothing to look forward to, no temptations to regret taking or refusing. Bleak, bleak, Chaya was thinking, she who had loved the swaying grasses and the starry nights. Now the only excitement was the chance that, if you kept your head cocked back, you might see a dead star falling.

But here was the worrisome thing:  Chaya’s mother caught her eye across the room.  Widened her eye a thousandth of an inch – less – a little glint of collusion, a twitch of possibility so miniscule she was not sure her mother would have acknowledged it to herself.

Betrayal fouled the air, sharp as manure.  She imagined this frail, leafless twig tight against her, the two of them in their own little room off the Common, bundled under a quilt lovingly made for them by die weiber, required to lie close. Required to breed like the chickens in the hutch. Chaya did not dare to think she deserved a prince, but she saw her body pass through his like that hand through candle flame, and she believed she would sooner throw herself in their stagnant pond than let him near her.

And then he winked at her.  One of those pale reptilian eyes creased in a coy flicker of greeting, as if she had agreed to something, and she could feel her hands becoming fists in her lap.  Suddenly, then -- it made so much sense that she gasped out loud – finally, finally, she understood that she had been waiting for this:  she was going to leave the Fields of Zion.

Her dual – no, triple -- acts of thievery, abandonment and kidnapping, had exhausted her. She had executed in fastidious Yiddish a simple note that, contrary to every pleading by her consoling side, refused apology, and left it propped against the pillow (stuffed with their own chickens’ feathers) on her parents’ bed:

I am not yours to give away.  So I am going to hide for

a while. Please do not look for me.  I promise to keep myself

safe.  Some day I may even make you proud.

Then, like Jonah who escaped into sleep at the bottom of the ship that bore him from Tarshish, Chaya hid from what she had done and, finally, from the knowledge that she could not imagine where they were going and how they would survive there. She had said “No.” “Yes” was not something she could afford to think about. When, reluctantly, she woke to clamor and flashing lights, what she saw was the chaos of engines, freight cars, wagons and cables, thick and daunting, and tracks that scrolled to the left and right in a shining script that she had no trouble reading. They had arrived in Chicago and no one would be there to greet them.