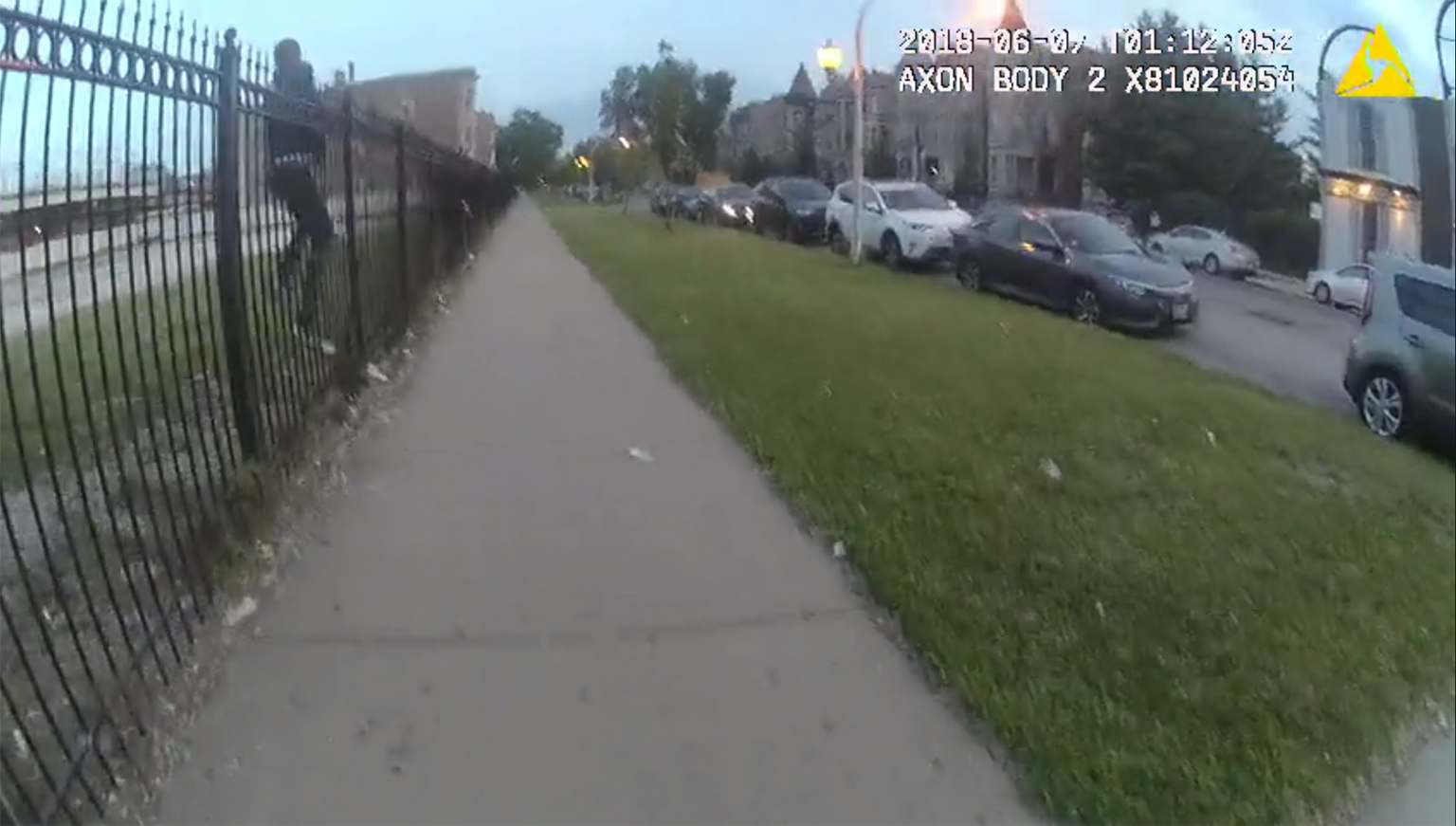 Maurice Granton, left, attempts to scale a fence moments before being shot by a Chicago officer on June 6, 2018. (Civilian Office of Police Accountability)

Attorneys representing the family of a man shot and killed by a Chicago police officer last month have filed a wrongful death lawsuit against the city, claiming the shooting was unjustified because the man posed no “imminent threat” to law enforcement when he was shot in the back in Bronzeville.

That footage shows Granton attempting to scale a fence at the edge of a vacant lot before turning and running from Thrasher, who appears to fire his service weapon at Granton from the opposite side of the fence. No audio is available of the shooting itself, though it is included in the footage after the 30-second mark.

Granton crumples to the ground as Thrasher repeatedly tells him to “stay down” and attempts to point out a firearm on Granton’s side of the fence to other officers who arrive on the scene.

But attorneys for Granton’s family say that video doesn’t jibe with the narrative CPD officials offered immediately after the shooting.

“The Chicago Police Department has consistently stated over the last several weeks that the incident was an armed confrontation, yet the body camera video footage never shows Granton Jr. armed at any time during the incident,” Andrew M. Stroth, managing partner of Action Injury Law Group, said in a statement.

“The use of deadly force by the police in this situation makes clear that our city’s officers lack proper training.”

Additional surveillance footage COPA released last week shows what led up to the shooting, as Granton and other men run from a CTA Green Line station on 47th Street after a CPD vehicle pulls up. The police department has said officers were conducting a narcotics investigation when they “responded to the area.”

In the footage released by COPA, a firearm can be seen on the ground several yards from Granton’s body. Officers did recover a semi-automatic handgun, but Granton’s family has claimed it didn’t belong to him and disagree with CPD's claim that he was armed.

UPDATE; Video prior to last night's officer involved shooting shows offender holding what turned out to be a semi automatic handgun that was later recovered by officers. pic.twitter.com/6nTI90CFsm

The suit, filed on behalf of Granton’s live-in girlfriend Latayshia Shaw and their two young daughters, claims the shooting violated CPD policies in that it occurred “without lawful justification,” and seeks damages in excess of $50,000.

“He was just a really good person,” Shaw told media days after the shooting. “He was a terrific father, I can’t even explain how much he did for our girls.”

The complaint claims Thrasher could have opted for “less-lethal” means of subduing Granton, such as using a stun gun, and states Granton had both hands on the fence when he was shot and was not seen carrying a firearm in body camera footage leading up to the shooting.

It also criticizes city policies, claiming recommendations from the Department of Justice and federal prosecutors regarding officer training and use of force policies have been willfully ignored, arguing this led directly to Granton’s death.

The suit comes amid ongoing negotiations between city officials, including Mayor Rahm Emanuel and CPD Superintendent Eddie Johnson, and the office of Attorney General Lisa Madigan over a consent decree that would bring in an independent federal monitor to oversee reforms within the police department.

The city Law Department said Monday afternoon it had not yet received a copy of the complaint and could not comment on the lawsuit.