Wisconsin – a state that hadn’t voted for a Republican presidential candidate in more than 30 years – went to Donald Trump, and helped assure his victory in the electoral college.

But while that result came as a shock to many, a new book by Dan Kaufman tracks how Wisconsin’s long tradition of progressive politics has undergone a complete 180 over the last few decades. It’s called “The Fall of Wisconsin: The Conservative Conquest of a Progressive Bastion and the Future of American Politics.”

Kaufman, a Wisconsin native, is now based in Brooklyn. He has written for The New Yorker and The New York Times Magazine.

Below, an excerpt from “The Fall of Wisconsin.” 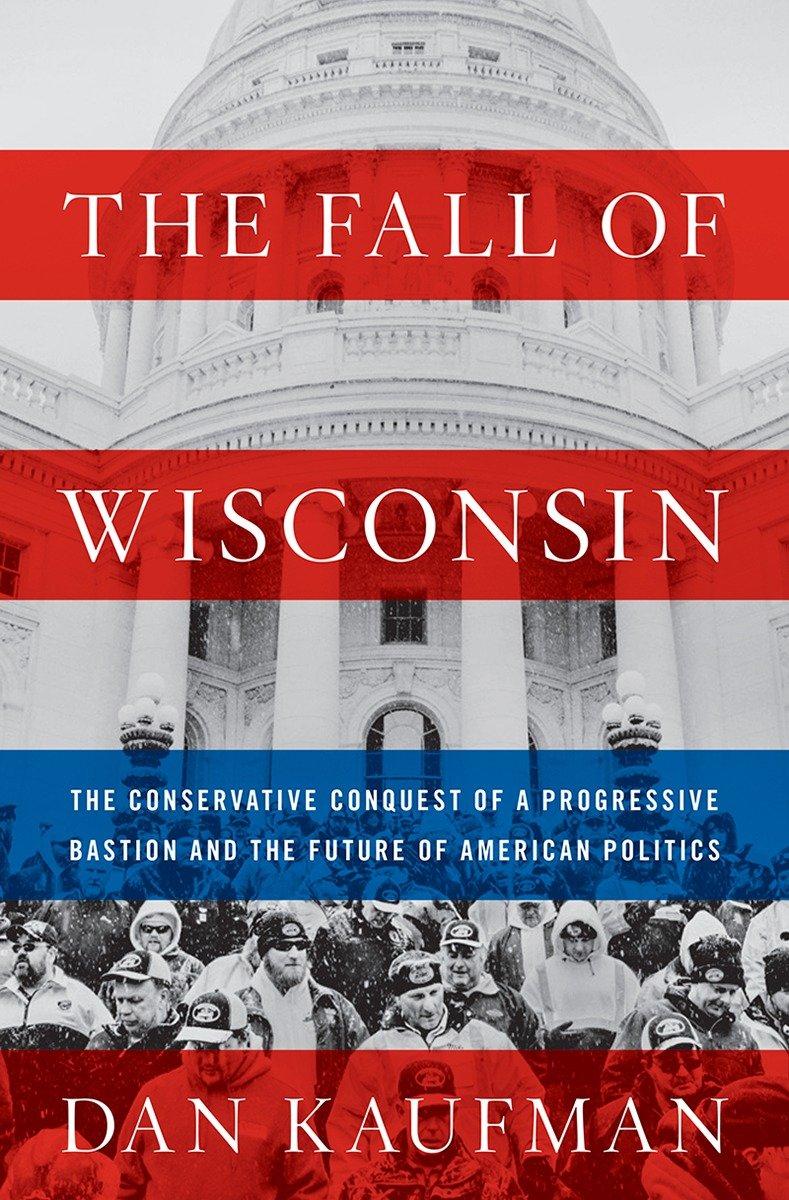 Hillary Clinton was confident about winning Wisconsin. Throughout the lead-up to the 2016 election, she had never trailed Donald Trump in a single poll, and Wisconsin had not gone for a Republican presidential candidate since 1984, when Ronald Reagan swept every state except Minnesota. Her confidence was reflected by not going there—even once—during the campaign. Pundits echoed Clinton’s surety. “Wisconsin looks like a blue wall there for Hillary Clinton?” a Milwaukee news anchor asked NBC’s Chuck Todd three days before the vote. “It does,” Todd replied. Or as Rachel Maddow said a few months earlier on MSNBC: “The Republican Party really, really, really wants Wisconsin to be a swing state—not true.” She went on: “Even as Republican presidential candidates lose there year after year after year—I mean even Michael Dukakis won Wisconsin, right?—Republicans still have kept their hopes alive that Wisconsin could be theirs.” If you looked at recent presidential elections, there was little reason to doubt the end result. In 2008, Barack Obama trounced John McCain in Wisconsin by fourteen points; four years later, he beat Mitt Romney comfortably by seven.

Some of Clinton’s supporters were planning to gather on election night at a Marriott in Middleton, a Madison suburb, for a joint victory party with the Democratic Senate candidate Russ Feingold. Feingold had held one of the state’s Senate seats for three terms before losing in 2010 to the Republican Ron Johnson, a wealthy political novice, in a shocking upset. In 2016, Feingold was heavily favored to win the rematch. His race tightened the week before the election, but he still led in every poll save one.

Feingold’s campaign had asked Chris Taylor, a Democratic assemblywoman from Madison, to help with his press that evening. Taylor was not confident of the outcome. She had canvassed for Democrats in rural Iowa County the summer before the election and remembered the indifference, and sometimes hostility, she was greeted with. A few people slammed the door in her face. “These should have been easy doors for us: A lot of them were Democrats,” she said. “It was worrisome.”

Early on Election Day, Taylor, who was also on the ballot, took her two boys, Sam and Ben, to a busy intersection on Madison’s Near East Side. The three of them wore “Chris Taylor for Assembly” T-shirts and held signs, waving at the cars honking their support. It was a clear and bright autumn day with a brisk wind blowing off Lake Monona a block away. Dozens of people had shown up to join Taylor and her kids. Someone brought doughnuts and hot chocolate for the volunteers, and the gathering turned festive. Taylor, though nervous, believed Clinton would pull it out.

In the afternoon, Taylor drove to the hotel for her press shift. Around seven, an hour before the polls closed, Feingold’s staff began receiving unsettling reports of low turnout in Milwaukee, a Democratic stronghold. By nine o’clock, Feingold’s prospects looked grim, and Clinton’s chances in Florida and Pennsylvania were slipping away. “People were looking to me for reassurance,” Taylor said. “They came up to me, crying: ‘Oh my God, Chris. What are we going to do?’“ Outwardly, Taylor maintained her calm, but she too started to worry that Clinton would lose Wisconsin.

Taylor tried to comfort people, telling them not to give up hope, that returns from heavily Democratic Dane County, which includes Madison, were still coming in. But the state’s rural areas, including some of the towns and villages Taylor had canvassed, delivered strongly for Trump. Soon Taylor began panicking. Around ten, Feingold emerged into a large ballroom ashen-faced and visibly shaken. “Something is happening in this country tonight,” he told his supporters in a brief concession speech. “I don’t understand it completely. I don’t think anybody does.” People in the room started breaking down, crying.

Taylor left after Feingold’s speech. She could no longer face the press. “I had been spinning Feingold was going to win,” she said. “I just couldn’t deal with it anymore. I ran to my car and called my husband. He and I just cried on the phone together.” Taylor drove home and watched the returns in her living room. She saw Trump win Pennsylvania and Republicans make gains in both houses of the Wisconsin State Legislature. Democrats held on to a mere thirty-five of ninety-nine state assembly seats; in 2009, after Obama’s election, they had fifty-two.

Around one in the morning, Taylor straggled to bed knowing Trump would win Wisconsin. A half hour later, the networks called it, awarding Trump Wisconsin’s ten electoral college votes, which pushed him past the 270-vote threshold needed to win the White House. Wisconsin had just made Donald Trump president. “Wisconsin! Wisconsin. Wisconsin was barely in play!” Megyn Kelly said on Fox News. On CNN, Jake Tapper called the result “stunning.”

Before she fell asleep, Taylor recalled a meeting she had with Democratic colleagues in the assembly months before the election. One of them assured Taylor that with Trump on the ticket, it would be a wave year for the state’s Democrats. “I remember thinking to myself: ‘You idiot! Republicans have a network, they have an infrastructure.’ We don’t. We might pick up a seat or two here and there, but until we have an infra­ structure as strong as theirs, we’re going to lose,” she said. “Few people in the country are aware of the mightiness of their network, but he should have known.”

DONALD TRUMP’S VICTORY may have shocked the Clinton campaign and media pundits, but the result merely heralded the final stage of Wisconsin’s dramatic transformation from a pioneering beacon of progressive, democratic politics to the embodiment of that legacy’s national unraveling. Powerful conservative donors and organizations across the country had Wisconsin in their sights years before the 2016 presidential election, helping Governor Scott Walker and his allies systematically change the state’s political culture.

Wisconsin’s history made it an especially attractive and important target. In the early twentieth century, native icons like the populist senator and governor Robert La Follette, who was known as Fighting Bob, and movements like Milwaukee’s pragmatic “sewer socialism” forged a progressive tradition that withstood the most calamitous events of the twentieth century. La Follette instituted numerous reforms—direct primaries, a ban on corporate donations to political candidates, civil-service protections—to  encourage citizen  participation in government and help establish Wisconsin as a bastion of democratic ideals. “Democracy is a life, and involves continual struggle,” he wrote in his autobiography. “It is only as those of every generation who love democracy resist with all their might encroachments of its enemies that the ideals of representative government can even be nearly approximated.”

Throughout the twentieth century, Wisconsin led the country in devising pioneering legislation that aided the vast majority of its citizens. In 1911, the state legislature established the nation’s first workers’ compensation program, a progressive state income tax, and more stringent child-labor laws. The following year, President Theodore Roosevelt described Wisconsin as a “laboratory for wise, experimental legislation aiming to secure the social and political betterment of the people as a whole.” The state’s progressive spirit continued for generations, influencing the entire country: Wisconsin created the first unemployment-insurance program, and it was the first state to recognize collective bargaining rights for public employees. Indeed, much of Franklin D. Roosevelt’s New Deal, including the Social Security Act, was drafted by Wisconsinites loyal to the Wisconsin Idea, an ethos that placed a moral obligation on the University of Wisconsin to serve the citizens of the state. More broadly, the Wisconsin Idea encouraged legislation, informed by the expertise of the university’s faculty, aimed at creating a more equitable society. Its humanistic reach extended to Great Society programs like Medicare, designed by another Wisconsinite under its sway decades later. More than any other state, Wisconsin embodied Supreme Court Justice Louis Brandeis’s hope that states might become “laboratories of democracy.”

THE FALL OF WISCONSIN is the story of how the state went from a widely admired “laboratory of democracy” to a testing ground for national conservatives bent on remaking American politics. It traces the ways Wisconsin’s century-old progressive legacy has been dismantled in virtually every area: labor rights, environmental protection, voting rights, government transparency. Those efforts have been wildly successful, culminating in Wisconsin’s startling deliverance of the White House to Donald Trump.

By the time Speaker of the House Paul Ryan declared he would be returning home to Janesville rather than running for reelection, Wisconsin had seen one of the largest declines of the middle class of any state in the country. Its poverty rate had climbed to a thirty-year high; the state’s roads were the second worst in the country; the University of Wisconsin­ Madison had fallen, for the first time, out of the  rankings of the country’s top five research schools. A study estimated that 11percent of the state’s population was deterred from voting in the 2016 presidential election by Wisconsin’s new voter ID law, one of the strictest in the nation.

How could this have happened?

To tell this story, I’ve relied on citizens who bore the brunt of the assault on long-cherished ideals and policies. They chose to fight back—and continue to do so in the face of enormous odds, a testament to their perseverance and a shared conviction that they might one day reclaim Wisconsin’s progressive heritage.

But The Fall of Wisconsin is also a story about the direction of America as a whole. It explores whether the state’s democratic ideals can persist in an era of increasing division and inequality. Wisconsin, after all, once had what any pragmatic citizen might admire, even covet: clean air and water, trans­ parent government, good public schools, a world-class state university, and a strong tradition of supporting labor rights for its workers. Precisely because of those attributes, the state became a target for national conservatives. As Scott Walker boasted in his memoir, if he could change Wisconsin, he and his allies could “do it anywhere.”

In the end, this is a story that addresses a concern central to every American: If conservatives cannot tolerate a state that offers what Wisconsin once did, what kind of future is there for the American citizen?

Excerpted from The Fall of Wisconsin: The Conservative Conquest of a Progressive Bastion and the Future of American Politics by Dan Kaufman. © 2018 by Dan Kaufman. Used with permission of the publisher, W.W. Norton & Company, Inc. All rights reserved.

University of Chicago Philosopher Explores Role of Fear in 2016 Election