Around the world, the number of people who say it’s “essential” to live in a democracy is in sharp decline, especially among young people. That’s according to a study published last year.

Support among young Americans for a leader untethered by Congress is on the rise, as is approval of military rule. And while the 2016 Brexit vote and election of Donald Trump were seen as seismic political shifts, scholar Yascha Mounk argues there’s an even broader story to be told. His new book is called “The People versus Democracy: Why Our Freedom Is in Danger and How to Save It.”

Mounk, a lecturer at Harvard University and a senior fellow at the New America Foundation, joins Chicago Tonight for a conversation.

Below, an excerpt from “The People versus Democracy.”

After the fall of the Soviet Union, liberal democracy became the dominant regime form around the world. It seemed immutable in North America and Western Europe, quickly took root in formerly autocratic countries from Eastern Europe to South America, and was making rapid inroads across Asia and Africa. 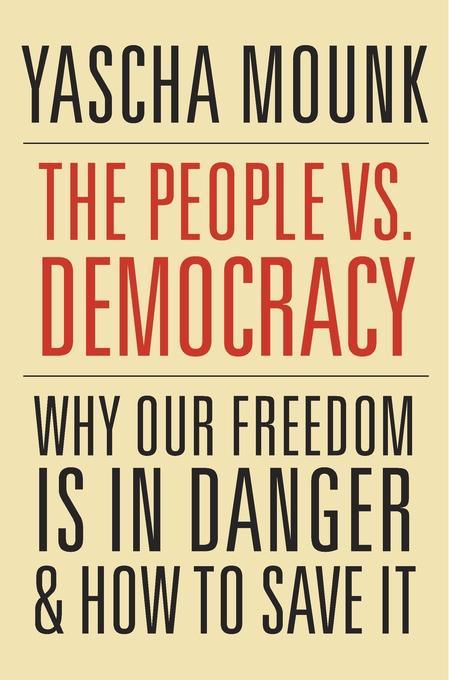 One reason for liberal democracy’s triumph is that there was no coherent alternative to it. Communism had failed. Islamic theocracy had precious little support outside the Middle East. China’s unique system of state capitalism under the banner of communism could hardly be emulated by countries that didn’t share its unusual history. The future, it seemed, belonged to liberal democracy.

The idea that democracy was sure to triumph has come to be associated with the work of Francis Fukuyama. In a sensational essay published in the late 1980s, Fukuyama argued that the conclusion of the Cold War would lead to “the end point of mankind’s ideological evolution and the universalization of Western liberal democracy as the final form of human government.” Democracy’s triumph, he proclaimed in a phrase that has come to encapsulate the heady optimism of 1989, would mark “The End of History.”

Plenty of critics took Fukuyama to task for his supposed naiveté. Some argued that the spread of liberal democracy was far from inevitable, fearing (or hoping) that many countries would prove resistant to this Western import. Others argued that it was too early to foresee what kind of improvement human ingenuity might be able to dream up over the course of the coming centuries: perhaps, they ventured, liberal democracy was just a prelude to a more just and enlightened form of rule.

Despite the vociferous criticism, Fukuyama’s core assumption proved highly influential. Most of the people who warned that liberal democracy might not triumph around the world were just as sure that it would remain stable in the democratic heartlands of North America and Western Europe. Indeed, even most political scientists, far too careful to make sweeping proclamations about the end of history, reached much the same conclusion. Democracies in poor countries, they observed, often failed. Autocrats were regularly ousted from power even when they could offer their subjects a good standard of living. But once a country was both affluent and democratic, it proved incredibly stable. Argentina had experienced a military coup in 1975, when its gross domestic product per capita was about $14,000 in today’s currency. Above that threshold, no established democracy had ever collapsed.

Awed by the unparalleled stability of wealthy democracies, political scientists began to conceive of the postwar history of many countries as a process of “democratic consolidation.” To sustain a durable democracy, a country had to attain a high level of wealth and education. It had to build a vibrant civil society and ensure the neutrality of key state institutions like the judiciary. Major political forces had to accept that they should let voters, rather than the might of their arms or the thickness of their wallets, determine political outcomes. All of these goals frequently proved elusive.

Building a democracy was no easy task. But the prize that beckoned was both precious and perennial: once the key benchmarks of democracy were attained, the political system would be stable forevermore. Democratic consolidation, on this vision, was a one-way street. Once democracy had, in the famous phrase of Juan J. Linz and Alfred Stepan, become “the only game in town,” it was there to stay.

So confident were political scientists in this assumption that few considered the conditions under which democratic consolidation might risk running in reverse. But recent events call this democratic self-confidence into question.

A quarter century ago, most citizens of liberal democracies were very satisfied with their governments and gave high approval ratings to their institutions; now, they are more disillusioned than they have ever been.

A quarter century ago, most citizens were proud to live in a liberal democracy and strongly rejected authoritarian alternatives to their system of government; now, many are growing increasingly hostile to democracy. And a quarter century ago, political adversaries were united in their shared respect for basic democratic rules and norms; now, candidates who violate the most basic norms of liberal democracy have gained great power and influence.

Just take two examples drawn from my own research: Over two-thirds of older Americans believe that it is extremely important to live in a democracy; among millennials, less than one-third do. The sinking attachment to democracy is also making Americans more open to authoritarian alternatives. Back in 1995, for example, only one in sixteen believed that army rule is a good system of government; today, one in six do.

Under these radically changed circumstances, it would be foolhardy to assume that the stability of democracy is sure to persist. The first big assumption of the postwar era—the idea that rich countries in which the government had repeatedly changed hands through free and fair elections would forever remain democratic—has, all along, stood on shaky ground.

If the first big assumption that shaped our political imagination has turned out to be unwarranted, there’s reason to reexamine the second big assumption as well.

Liberalism and democracy, we have long thought, make a cohesive whole. It is not just that we care both about the popular will and the rule of law, both about letting the people decide and protecting individual rights. It’s that each component of our political system seems necessary to protect the other.

There is indeed good reason to fear that liberal democracy cannot survive if one of its elements is abandoned. A system in which the people get to call the shots ensures that the rich and powerful cannot trample on the rights of the lowly. By the same token, a system in which the rights of unpopular minorities are protected and the press can freely criticize the government ensures that the people can change its rulers through free and fair elections. Individual rights and the popular will, this story suggests, go together like apple and pie or Twitter and Donald Trump.

But the fact that a working system needs both elements to thrive does not mean that a system that has both will necessarily be stable. On the contrary, the mutual dependence of liberalism and democracy shows just how quickly dysfunction in one aspect of our politics can breed dysfunction in another. And so democracy without rights always runs the danger of degenerating into the thing the Founding Fathers most feared: the tyranny of the majority. Meanwhile, rights without democracy need not prove to be more stable: once the political system turns into a playground for billionaires and technocrats, the temptation to exclude the people from more and more important decisions will keep on growing.

This slow divergence of liberalism and democracy may be exactly what is now happening—and the consequences are likely to be just as bad as one would predict.