Her acclaimed 2017 novel “Sing, Unburied, Sing” tackles the legacy of racial injustice in Mississippi, a boy’s coming of age, the toll of drug abuse, and the world beyond what most people see.

“I write about what I see around me,” Ward said. “Many of the people that I know in my community, in my family, are dealing with the kinds of things that the characters in my book are dealing with.”

Ward also won the National Book Award for her 2011 novel “Salvage the Bones.” She joins us in discussion.

Below, an excerpt from “Sing, Unburied, Sing.”

Sometimes I think I understand everything else more than I’ll ever understand Leonie. She’s at the front door, paper grocery bags obscuring her, hitching the screen and kicking it open, and then edging through the door. Kayla scoots toward me when the door bangs shut; she snatches up her juice cup and sucks before kneading my ear. The little pinch and roll of her fingers almost hurts, but it’s her habit, so I swing her up in my arms and let her knead. Mam says she does it for comfort because she never breast-fed. Poor Kayla, Mam sighed every time. Leonie hated when Mam and Pop began calling her Kayla like me. She has a name, Leonie said, and it’s her daddy’s. She look like a Kayla, Mam said, but Leonie never called her that. 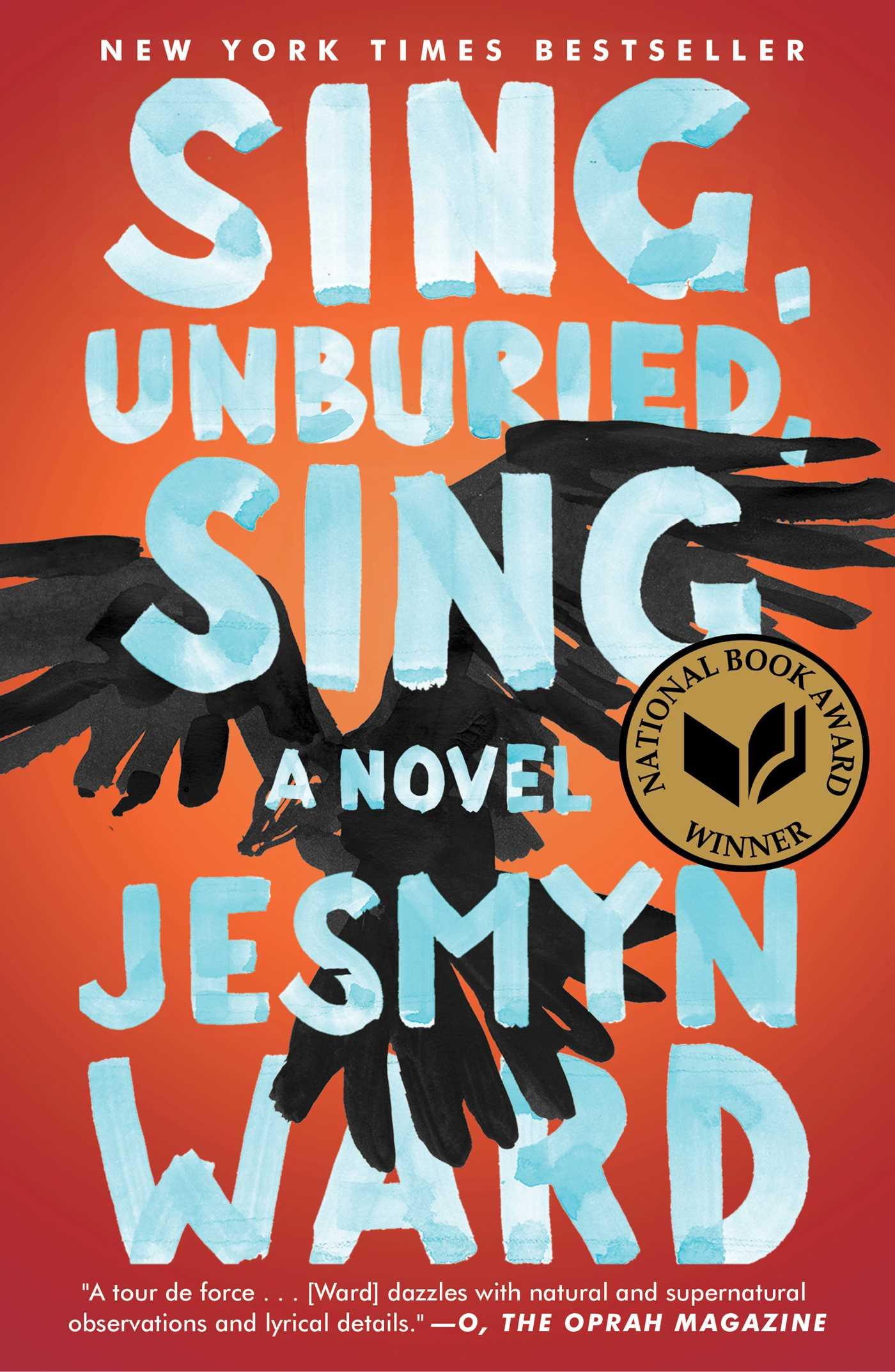 It’s not until I’m standing in the door of the kitchen and see Leonie pulling a small white box out of one of the bags that I realize this is the first year Mam won’t be making me a cake for my birthday, and then I feel guilty for realizing it so late in the day. Pop would make the meal, but I should have known that Mam couldn’t. She’s too sick with the cancer that came and left and returned, steady as the rising and sinking of the marsh water in the bayou with the moon.

“I got you a cake,” Leonie says, as if I’m too dumb to know what the box contains. She knows I’m not stupid. She said it herself once, when a teacher called her in to school to talk about my behavior, to tell Leonie: He never speaks in class, but he’s still not paying attention. The teacher said it in front of all the children, who were still sitting in their seats waiting to be dismissed for the buses. She assigned me to the frontmost desk in the classroom, the desk nearest the teacher’s, where every five minutes, she’d say, Are you paying attention, which inevitably interrupted whatever work I was doing and made it impossible to focus. I was ten then, and had already begun to see things that other kids didn’t, like the way my teacher bit her fingernails raw, like the way she sometimes wore so much eye makeup to hide bruising from someone hitting her; I knew what that looked like because both Michael’s and Leonie’s faces sometimes looked that way after fights. It made me wonder if my teacher had her own Michael. On the day of the conference, Leonie hissed: He ain’t stupid. Jojo, let’s go. And I winced at the way she used ain’t and the way she leaned in to the teacher without even knowing it, and the teacher blinked and stepped away from the latent violence coiled in Leonie’s arm, running from her shoulder down to her elbow and to her fist.

Mam always made me red velvet birthday cake. She began when I was one. When I was four, I knew it well enough to ask for it: said red cake and pointed at the picture on the box on the shelf in the grocery store. The cake that Leonie brought is small, about the size of both of my fists together. Blue and pink pastel sprinkles litter the top of the cake, and on the side, two little blue shoes. Leonie sniffs, coughs into her bony forearm, and then pulls out a half gallon of the cheapest ice cream, the kind with a texture like cold gum.

“They didn’t have no more birthday cakes. The shoes is blue, so it fits.”

It’s not until she says it that I realize Leonie got her thirteen-year-old son a baby shower cake. I laugh but don’t feel nothing warm, no joy in me when I do it. A laugh that ain’t a laugh, and it’s so hard Kayla looks around and then at me like I’ve betrayed her. She starts crying.

Usually, the singing is my favorite part of my birthday, because the candles make everything look gold, and they shine in Mam’s and Pop’s faces and make them look young as Leonie and Michael. Whenever they sing to me, they smile. I think it’s Kayla’s favorite part, too, because she sings stutteringly along. Kayla’s making me hold her, because she cried and pushed at Leonie’s collarbone and reached for me until Leonie frowned and held her out to me, said: “Here.” But this year, the song is not my favorite part of my birthday because instead of being in the kitchen, we’re all crowded into Mam’s room, and Leonie’s holding the cake like she held Kayla earlier, out and away from her chest, like she going to drop it. Mam’s awake but doesn’t really look awake, her eyes half open, unfocused, looking past me and Leonie and Kayla and Pop. Even though Mam’s sweating, her skin looks pale and dry, like a muddy puddle dried to nothing after weeks of no rain in the summer. And there’s a mosquito buzzing around my head, dipping into my ear, veering out, teasing to bite.

When the happy birthday song starts, it’s only Leonie. She has a pretty voice, the kind of voice that sounds good singing low but sort of cracks on the high notes. Pop is not singing; he never sings. When I was younger, I didn’t know because I’d have a whole family singing to me: Mam, Leonie, and Michael. But this year, when Mam can’t sing because she’s sick and Kayla makes up words to the melody and Michael’s gone, I know Pop isn’t singing because he’s just moving his lips, lip-synching, and there’s no noise coming out. Leonie’s voice cracks on dear Joseph, and the light from the thirteen candles is orange. No one but Kayla looks young. Pop is standing too far out of the light. Mam’s eyes have closed to slits in her chalky face, and Leonie’s teeth look black at the seams. There’s no happiness here.

“Happy birthday, Jojo,” Pop says, but he’s not looking at me when he says it. He’s looking at Mam, at her hands loose and open at her sides. Palms up like something dead. I lean forward to blow out my candles, but the phone rings, and Leonie jumps, so the cake jumps with her. The flames waver and feel hotter under my chin. Pearls of wax drip onto the baby shoes. Leonie turns away from me with the cake, looking to the kitchen, to the phone on the counter.

“You going to let the boy blow out his candles, Leonie?” Pop asks.

“Might be Michael,” Leonie says, and then there is no cake because Leonie’s taken it with her to the kitchen, set it on the counter next to the black-corded phone. The flames are eating the wax. Kayla shrieks and throws her head back. So I follow Leonie into the kitchen, to my cake, and Kayla smiles. She’s reaching for the fire. The mosquito that was in Mam’s room has followed us, and he’s buzzing around my head, talking about me like I’m a candle or a cake. So warm and delicious. I swat him away.

I grab Kayla’s arm and lean in to the flames. She struggles, transfixed.

Half the candles gutter out. “This week?”

The other half eating wax to the nub. “You sure?”

I blow again, and the cake goes dark. The mosquito lands on my head. So scrumptious, he says, and bites. I swat him, and my palm comes away smeared with blood. Kayla reaches.

Kayla has a handful of frosting, and her nose is running. Her blond afro curls high. She sticks her fingers in her mouth, and I wipe.

Michael is an animal on the other end of the telephone behind a fortress of concrete and bars, his voice traveling over miles of wire and listing, sun-bleached power poles. I know what he is saying, like the birds I hear honking and flying south in the winter, like any other animal. I’m coming home.