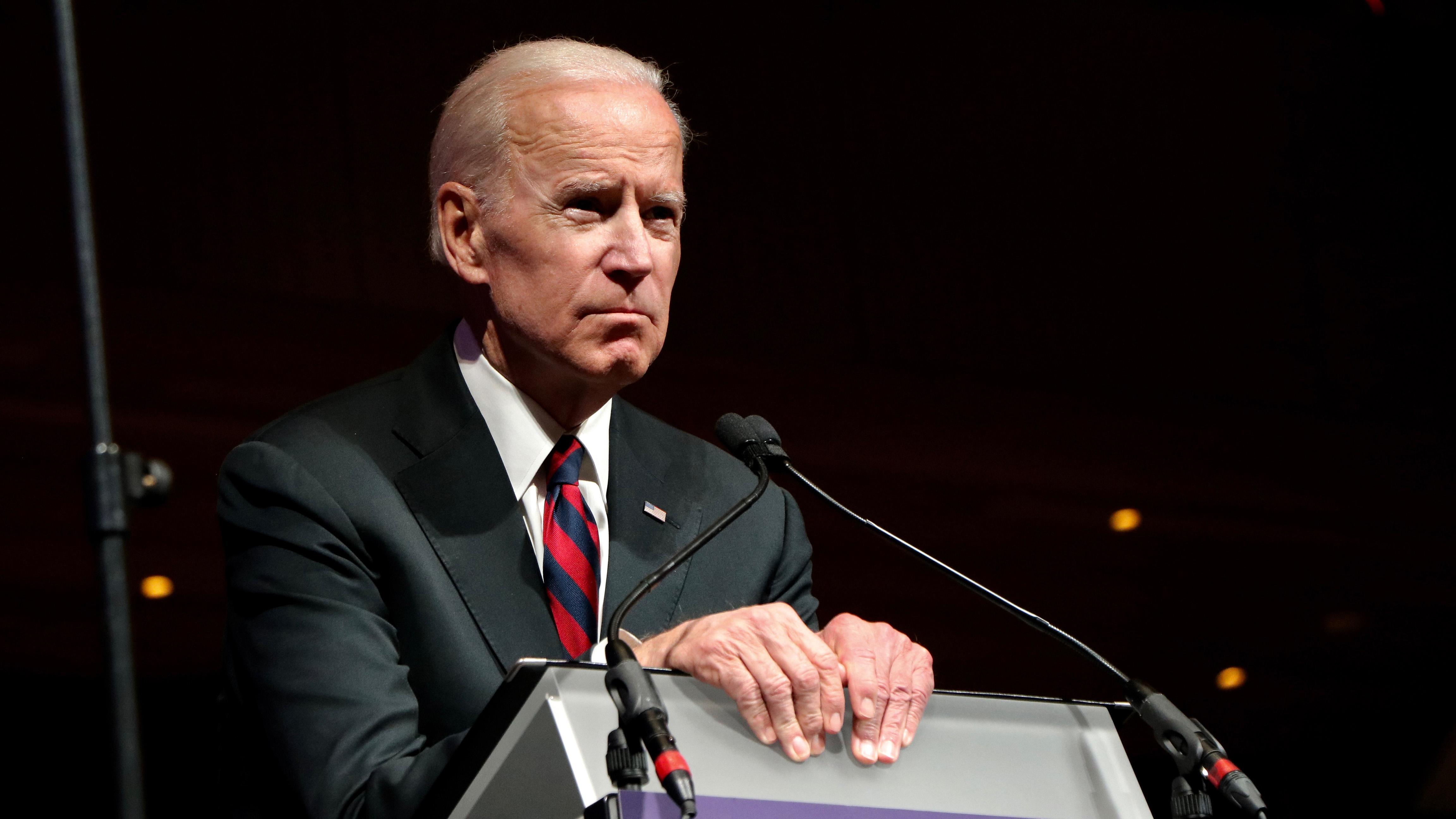 Ben Harris, a visiting associate professor at Kellogg who served as Biden’s chief economist and economic adviser, helped arrange the event and offered a preview of the speech earlier in the week.

“The general outline of the speech will be to discuss the divergent economic fortunes of various places,” Harris said. “We’ve heard a lot about income inequality over the past 20 years and I think most Americans are aware that it’s worsening, but we’re also starting to think about inequality among cities, towns and regions. That will be the focus.”

Harris said one point Biden will stress is revitalizing underperforming cities by building better infrastructure – and not just for the purpose of making travel or business more efficient, but for bridging paths of opportunity between underserved and prosperous areas.

”It’s about connecting people to jobs and success,” Harris said. “Giving opportunities to people who might not have a chance to see success unless they hop on a train to see what a successful community looks like.” 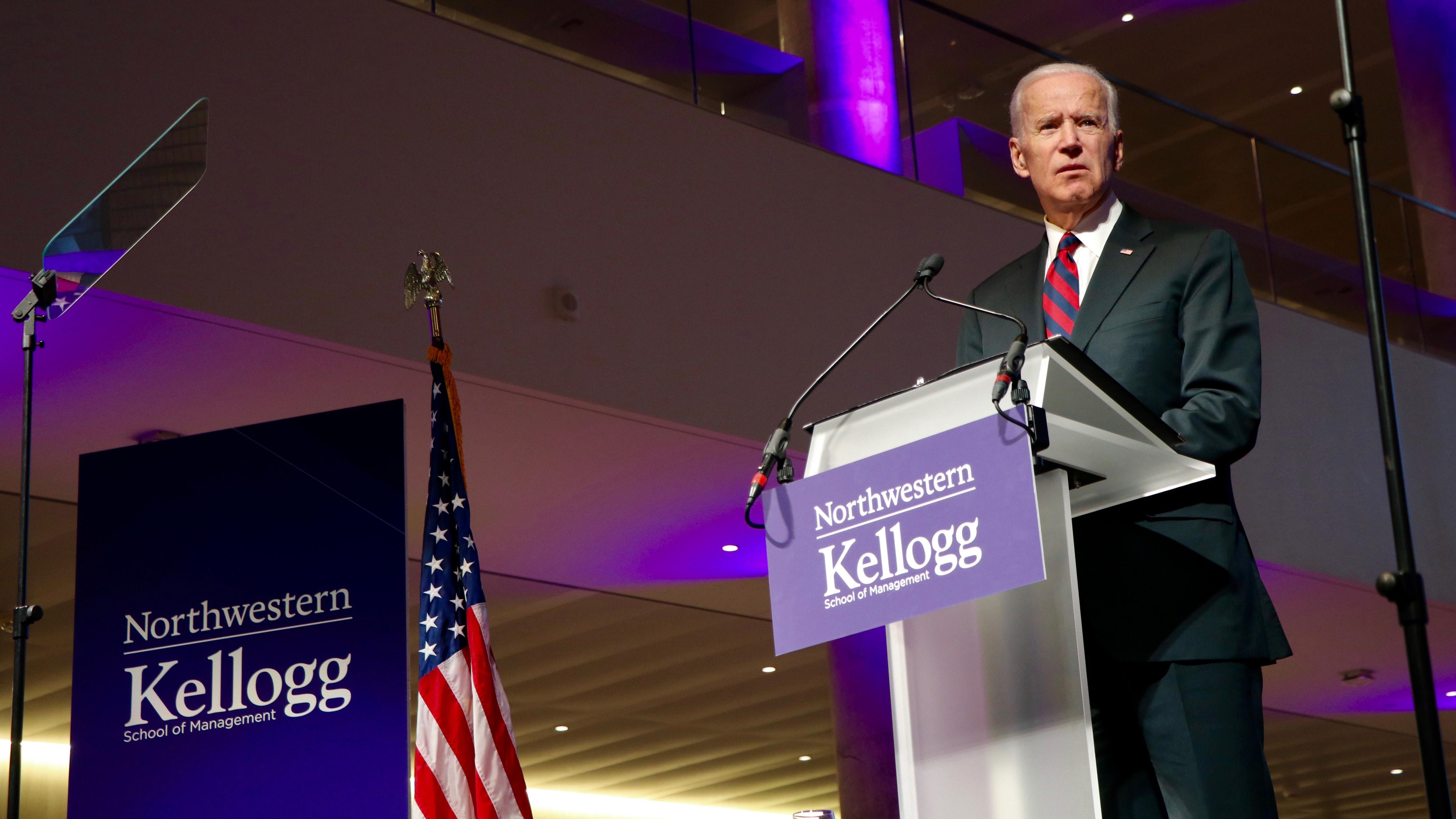 Of course, there is a lot of speculation surrounding another topic – whether or not Biden will run for president in 2020.

“That’s still an open question,” Harris said. “I haven’t been told anything different than what you might read. From a personal level, having spent quite a bit of time with him over the past four years, I think he’d make a terrific president if he decides to go that route, but he has not made up his mind.”

Tickets for Friday’s sold-out event were available to Kellogg faculty, staff and students. The event was also livestreamed.

Biden’s last visit to the area was on Dec. 11 at the Chicago Theatre, where he promoted his memoir “Promise Me, Dad: A Year of Hope, Hardship, and Purpose” as part of a nationwide tour.

Below, photos from the event. 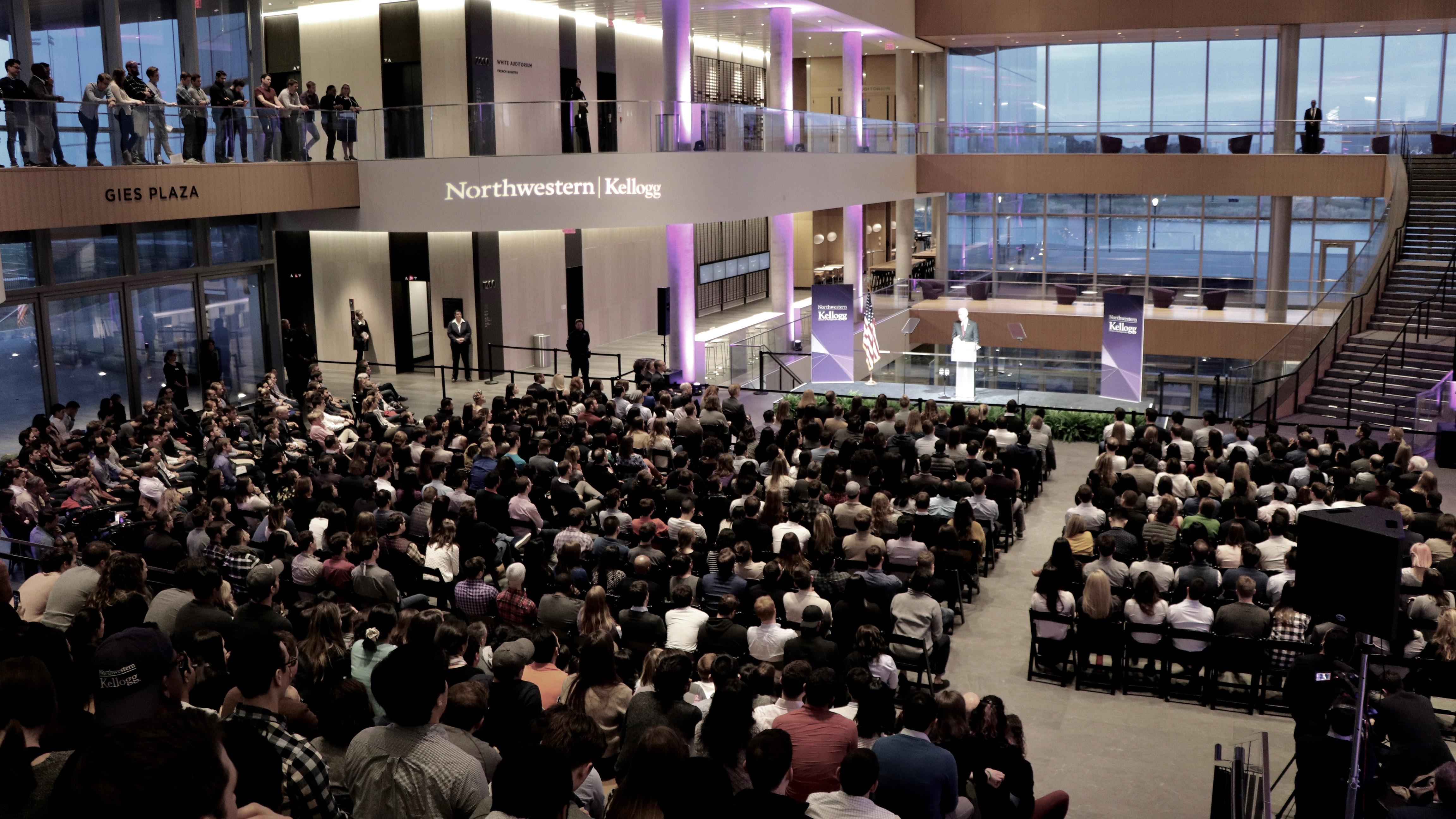 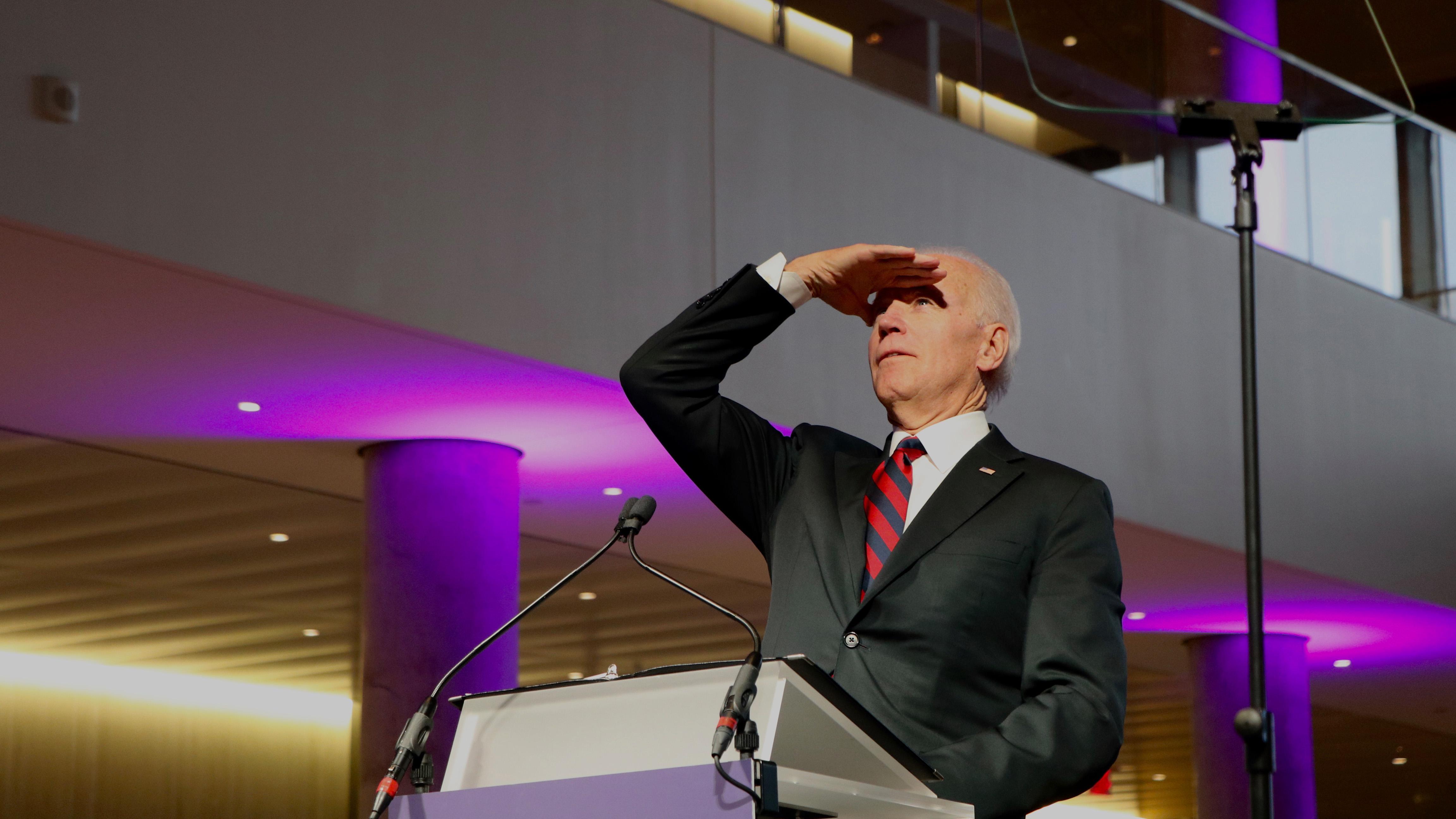 Biden takes a look at the crowd shortly after taking the stage. (Evan Garcia / Chicago Tonight) 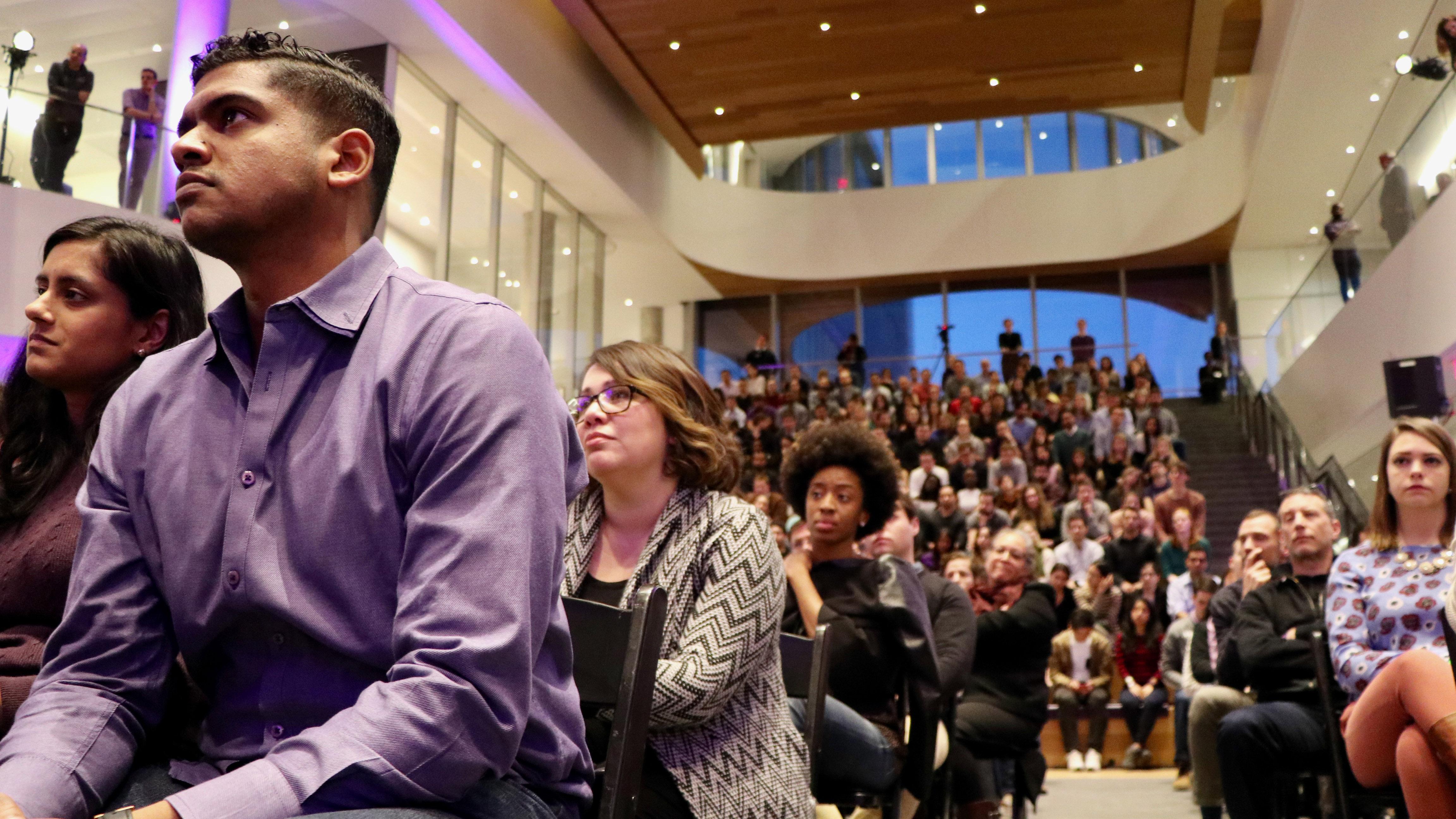 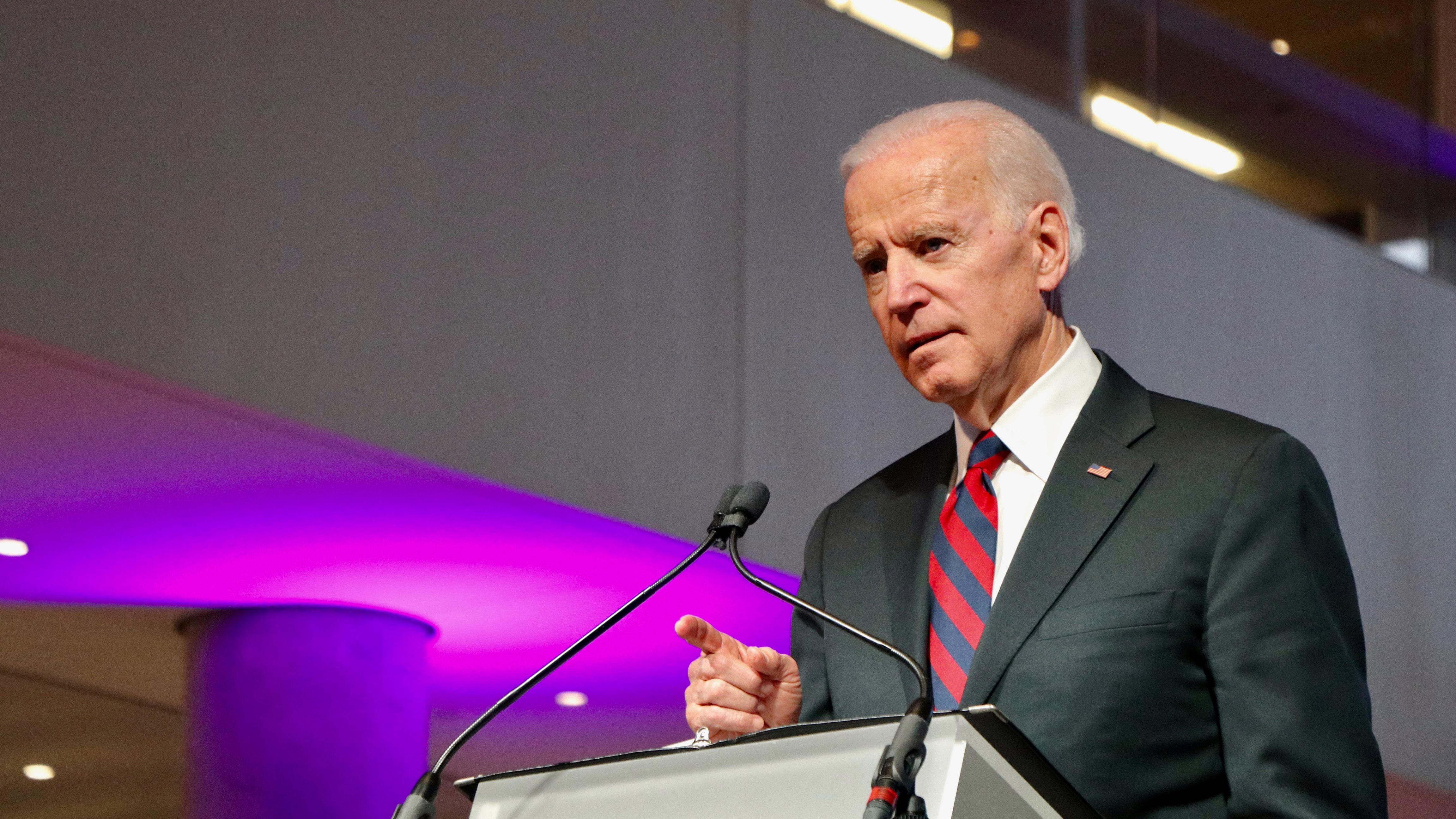 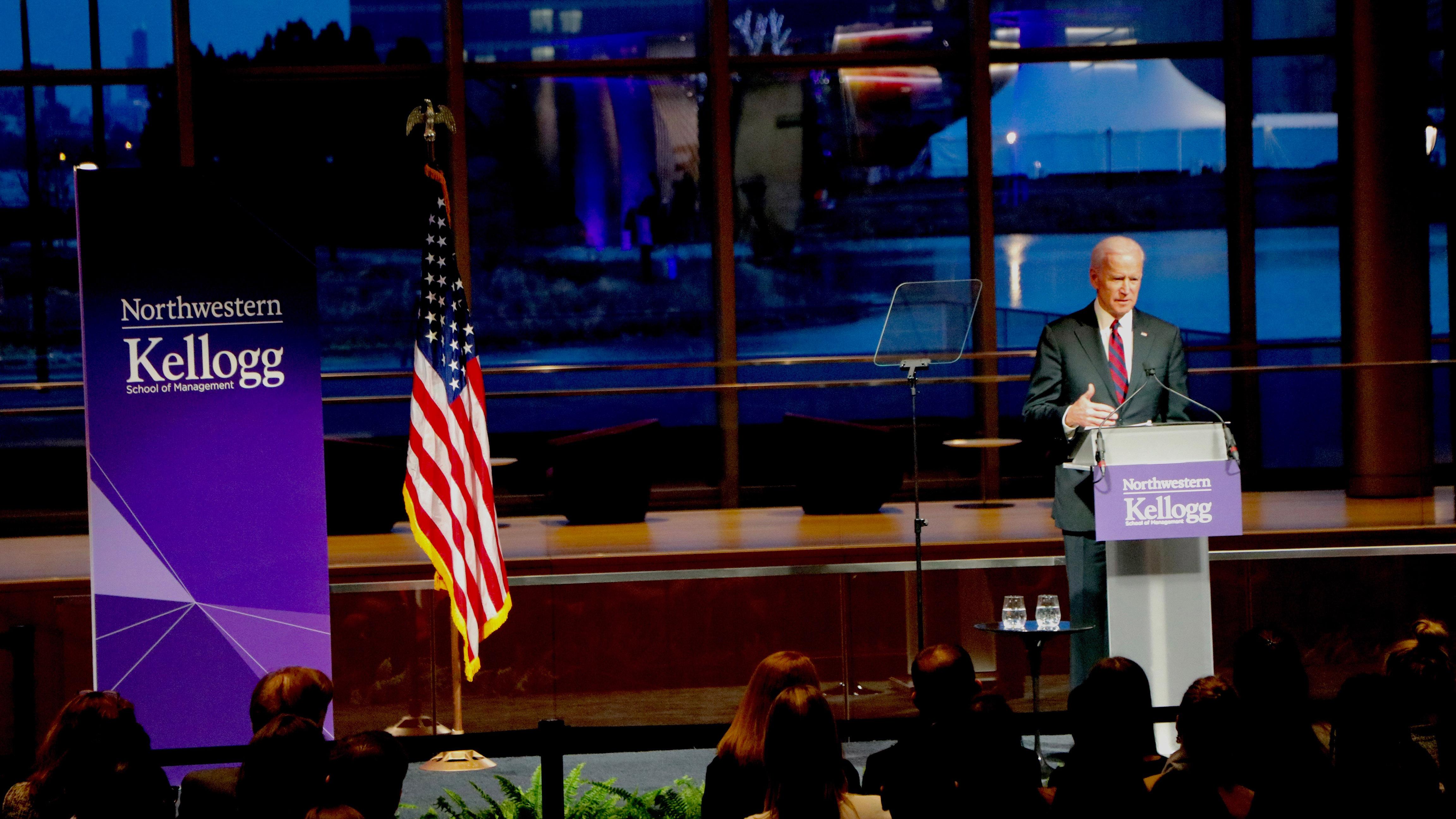 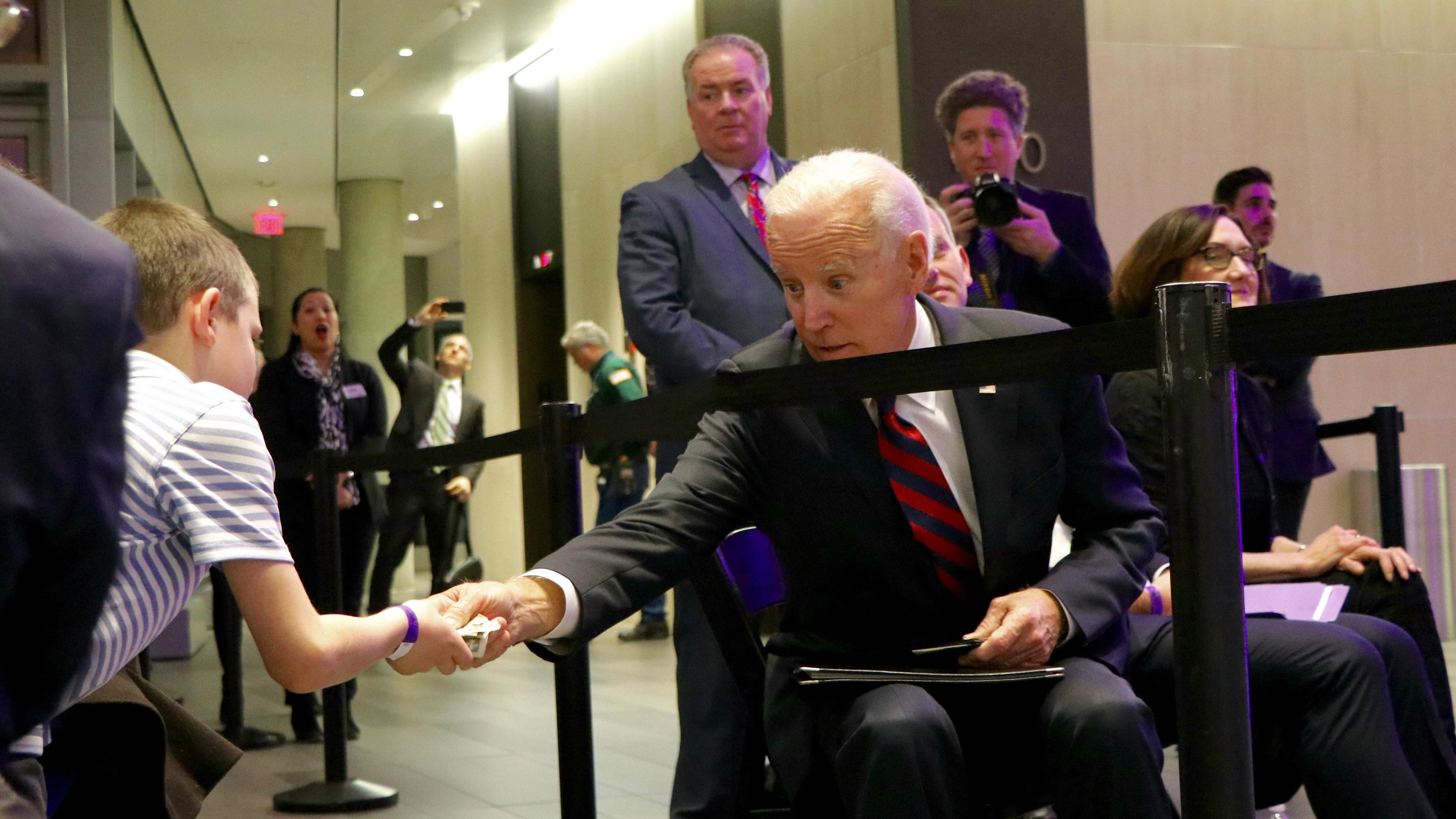 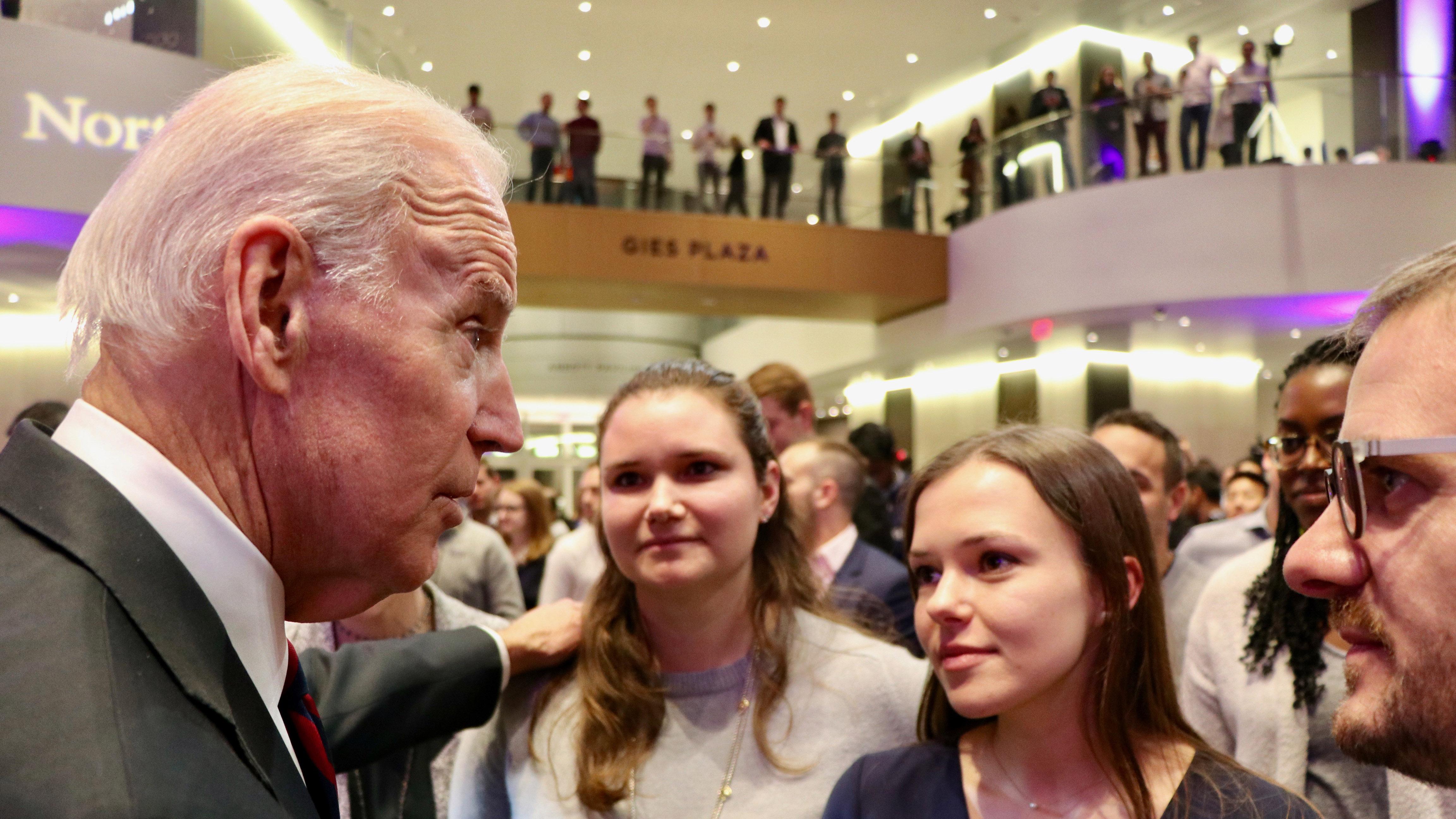 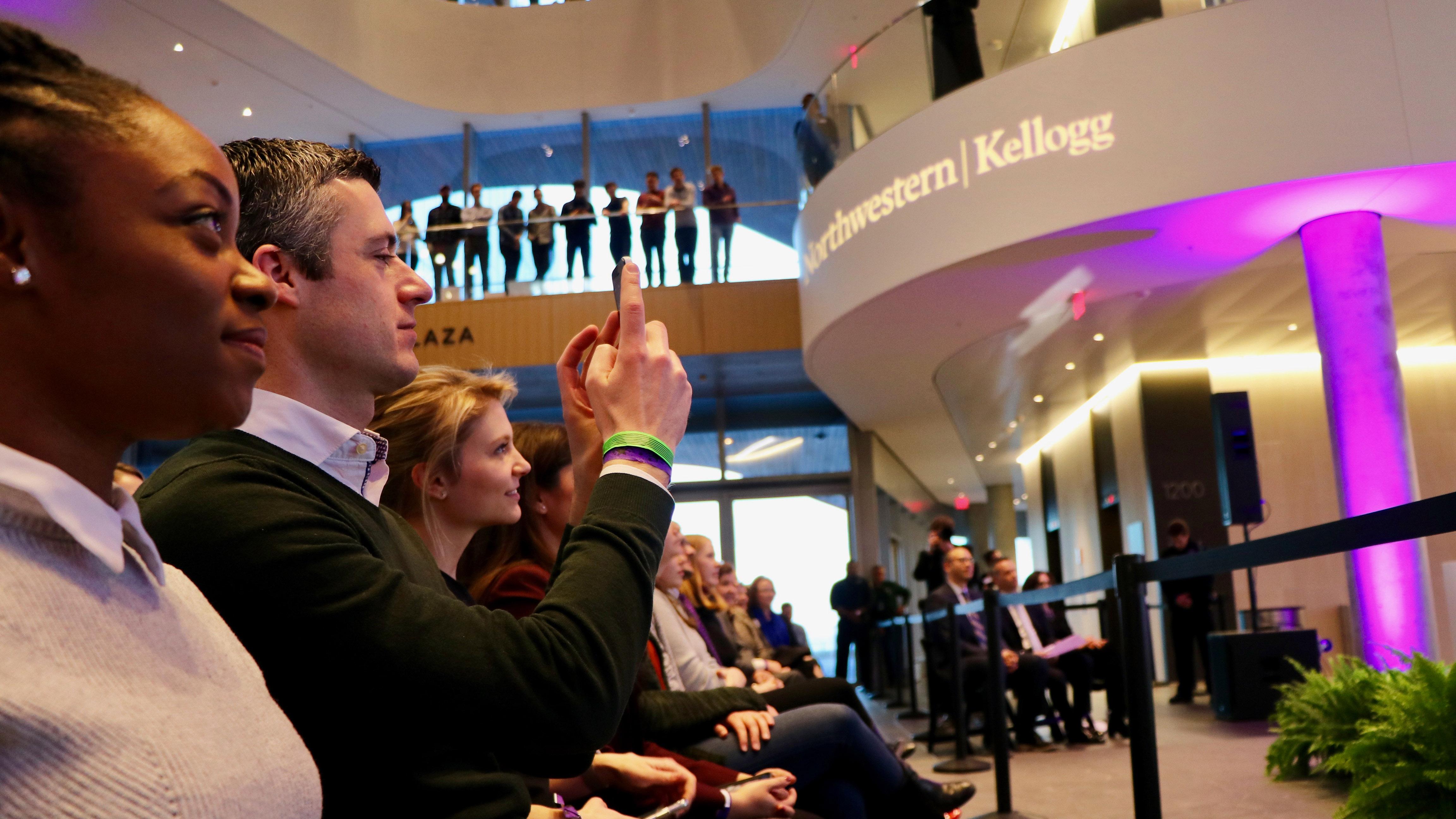 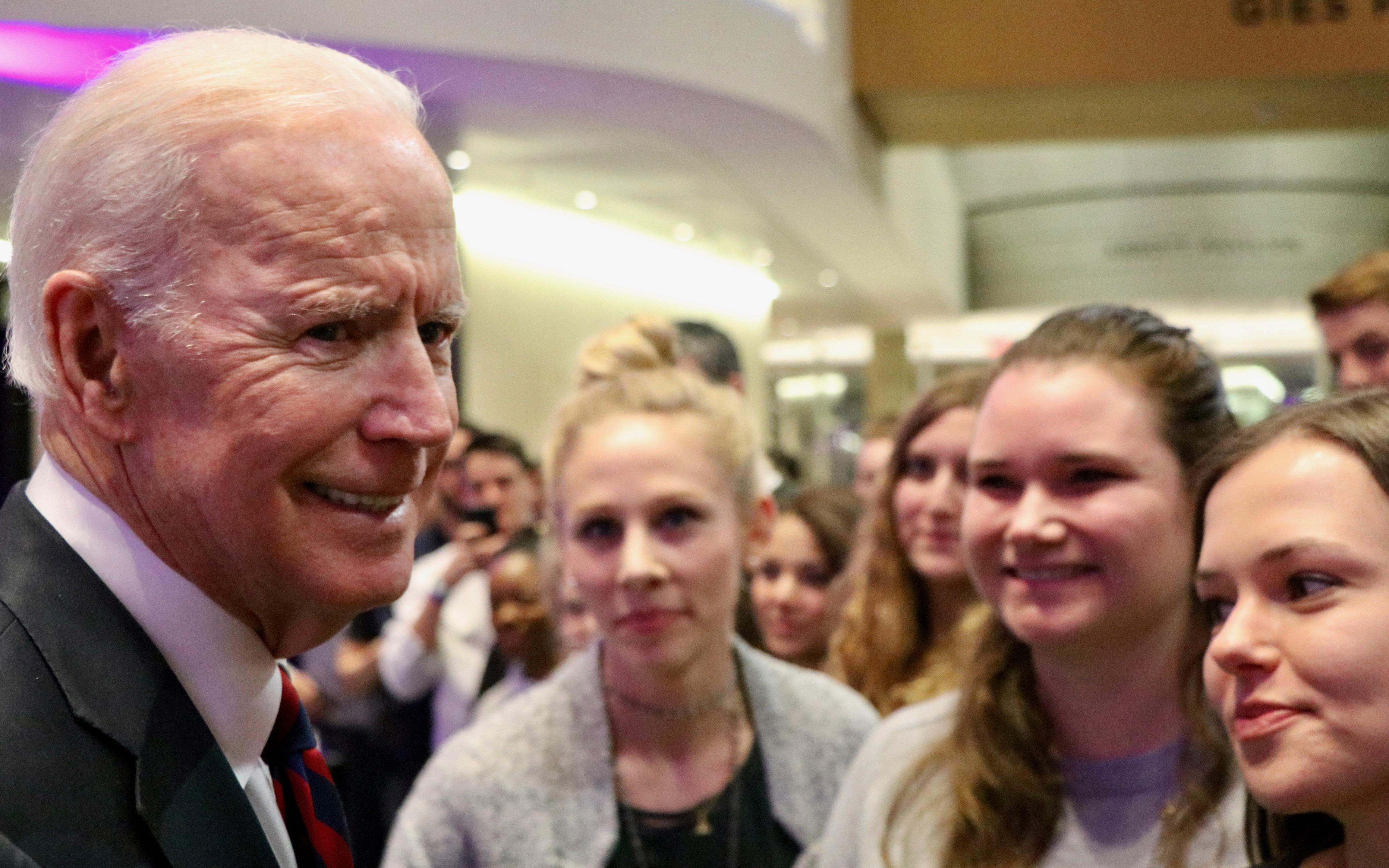 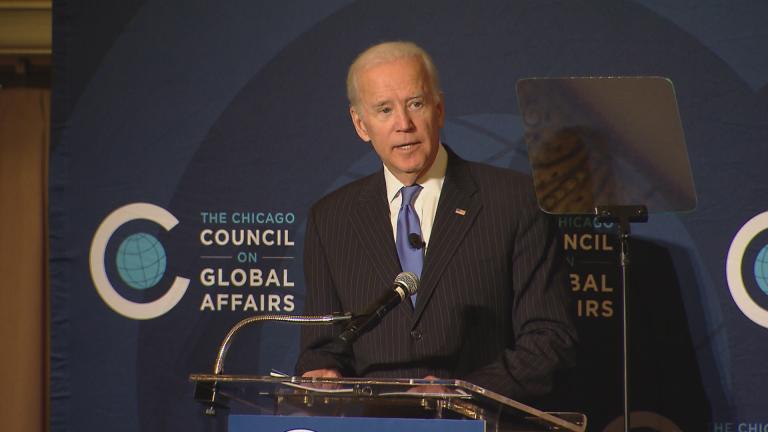 Nov. 1: Former Vice President Joe Biden weighs in on the current state of affairs and on the threat posed by Russia during a speech in Chicago. Is he laying the groundwork for 2020?

June 7, 2016: Cancer researchers will have an easier time accessing, sharing and analyzing information with the launch Monday of a new platform funded by the National Cancer Institute. 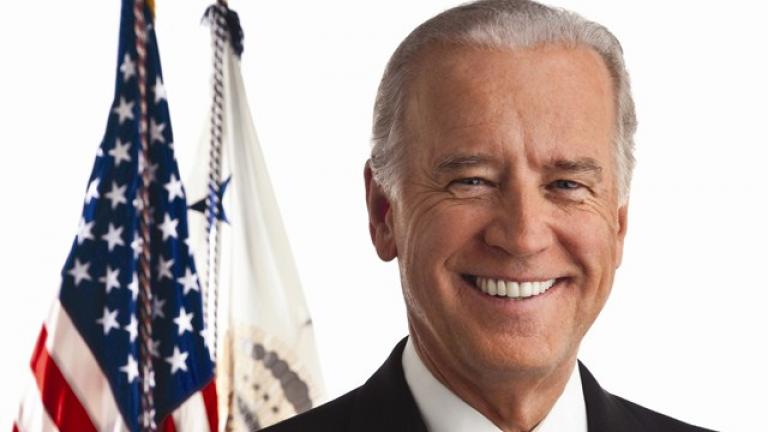 Draft Biden PAC Pushes for VP to Run in 2016

July 6, 2015: Vice President Joe Biden has run for president of the U.S. twice, most recently as an early Democratic contender in the 2008 primary. A Chicago-based movement called Draft Biden is hoping he’ll run once more. 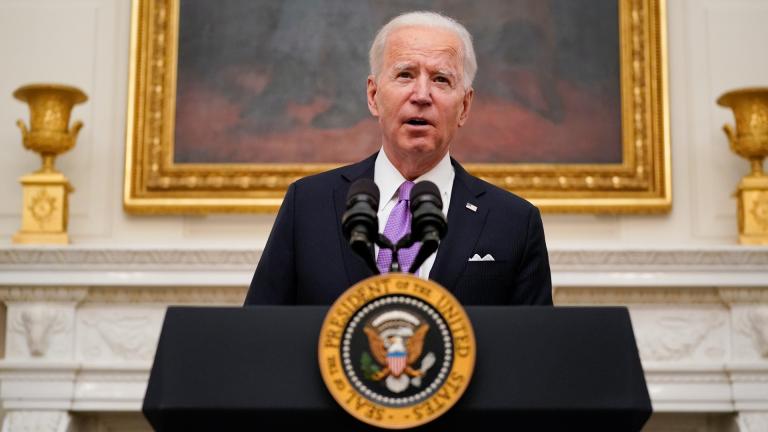 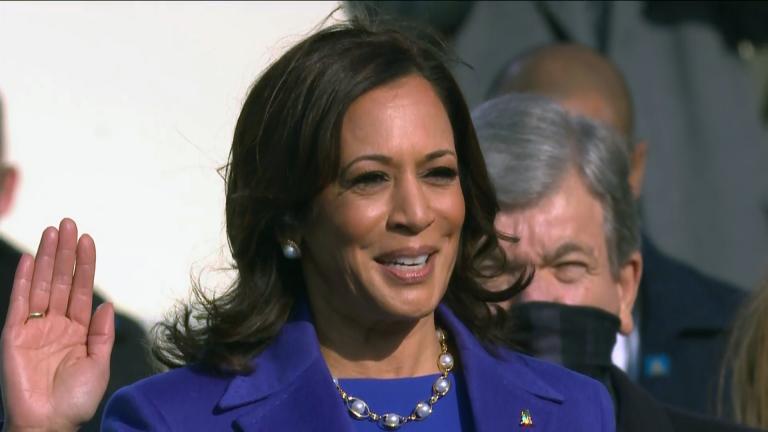