During his first stop on a four-day tour of the United States, Canadian Prime Minister Justin Trudeau spoke Wednesday at the University of Chicago, addressing trade tensions between both countries, as well as his vision of gender equality as a self-professed feminist.

Trudeau’s visit comes at a tenuous time for the North American Free Trade Agreement between the U.S., Canada and Mexico – a trade deal that President Donald Trump has publicly criticized and is considering pulling the U.S. out of.

While discussing NAFTA, Trudeau pointed to the symbiotic and mutually beneficial relationship between the U.S. and Canada as top trade partners, but emphasized Canada would renegotiate the agreement “firmly.”

“If we continue to exasperate differences or throw up our arms and say, ‘Yes, trade is bad,’ then we’re going to find ourselves in a place where growth will slow down,” Trudeau said. “There won’t be the kind of economic opportunities for citizens." 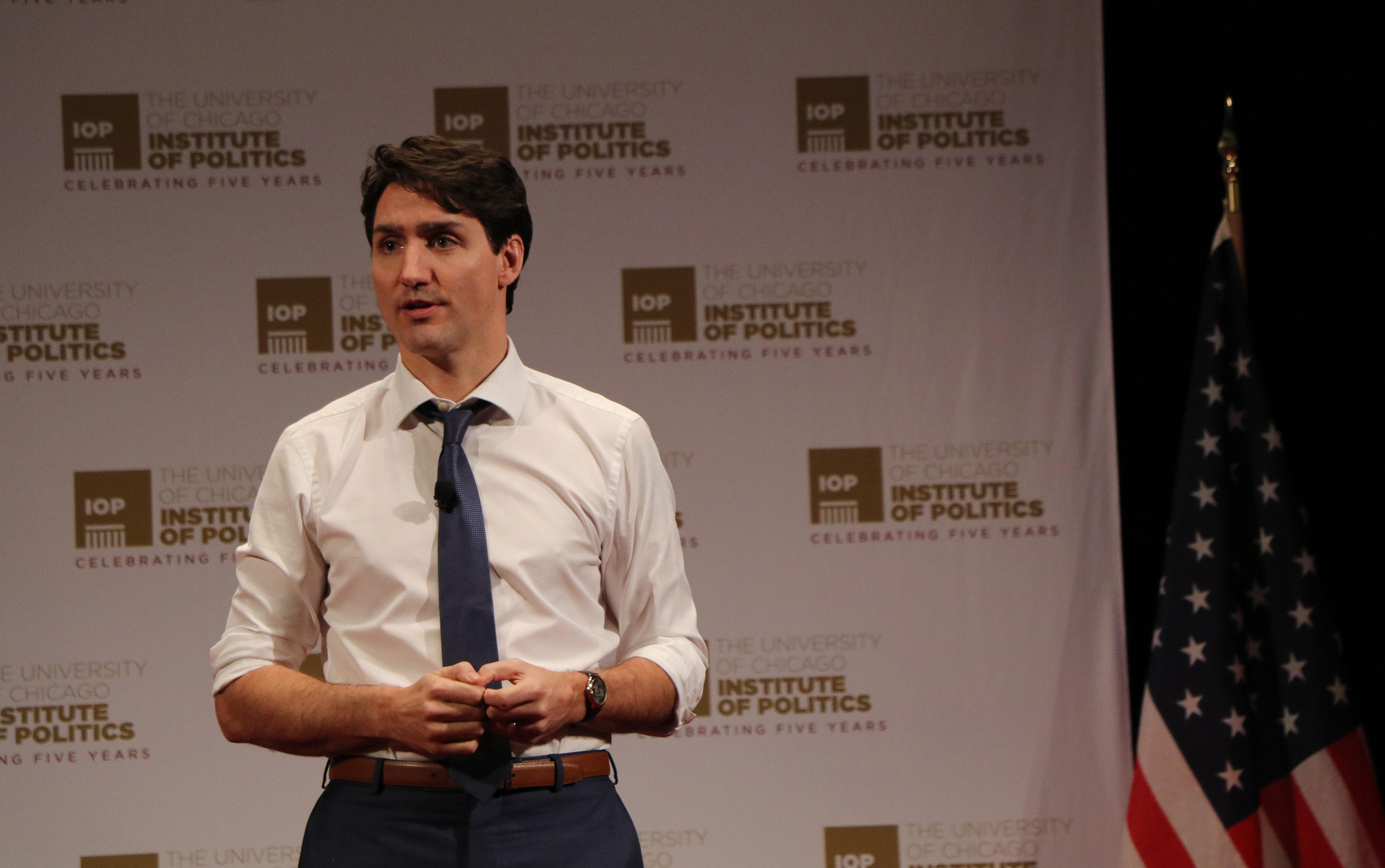 Trudeau also brought up systemic obstacles for women and advocated for trade agreements that include better labor standards for women.

“I am, as you’ve probably heard, a proud feminist,” Trudeau said to applause. “If women are not able to fully contribute to our economy the way they are able to, the way they certainly would want to be able to, in many cases, then we are not performing as communities, as an economy, as well as we should.”

Trudeau’s visit marked the fifth anniversary of the University of Chicago’s Institute of Politics. 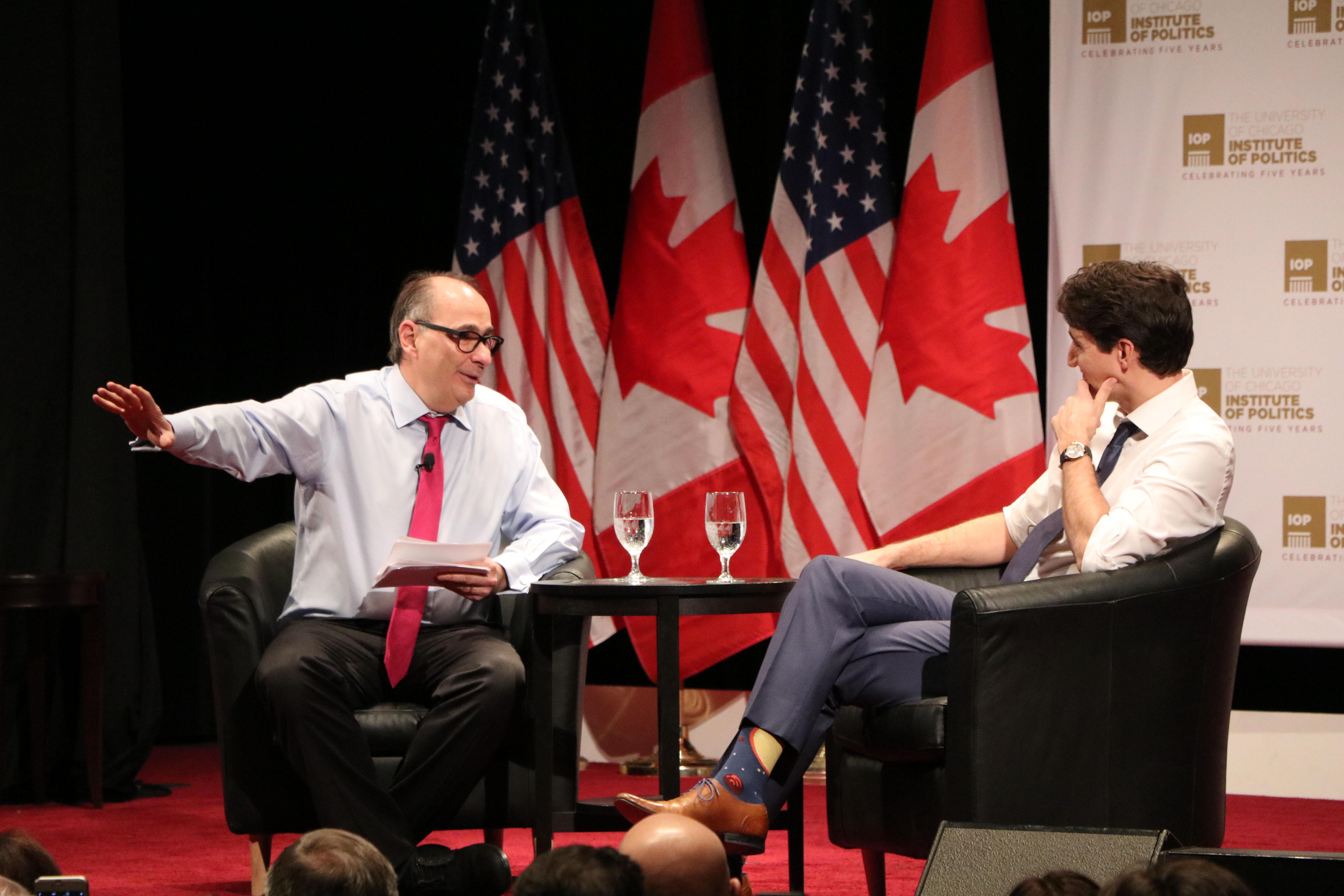 As a presidential candidate, Trump called NAFTA the “the single worst trade deal ever approved in this country” during his first debate against Democratic candidate Hillary Clinton in September 2016.

Trudeau met with Gov. Bruce Rauner and Mayor Rahm Emanuel prior to the University of Chicago event. After visiting Chicago, he will travel to San Francisco to meet with politicians and tech executives such as Amazon’s Jeff Bezos, then he will move on to Los Angeles, where he has a speech scheduled at the Ronald Reagan Presidential Foundation and Institute.

All 875 tickets for Wednesday’s event sold out in seven minutes, according to a university spokesman.

More photos from Trudeau's visit to University of Chicago: 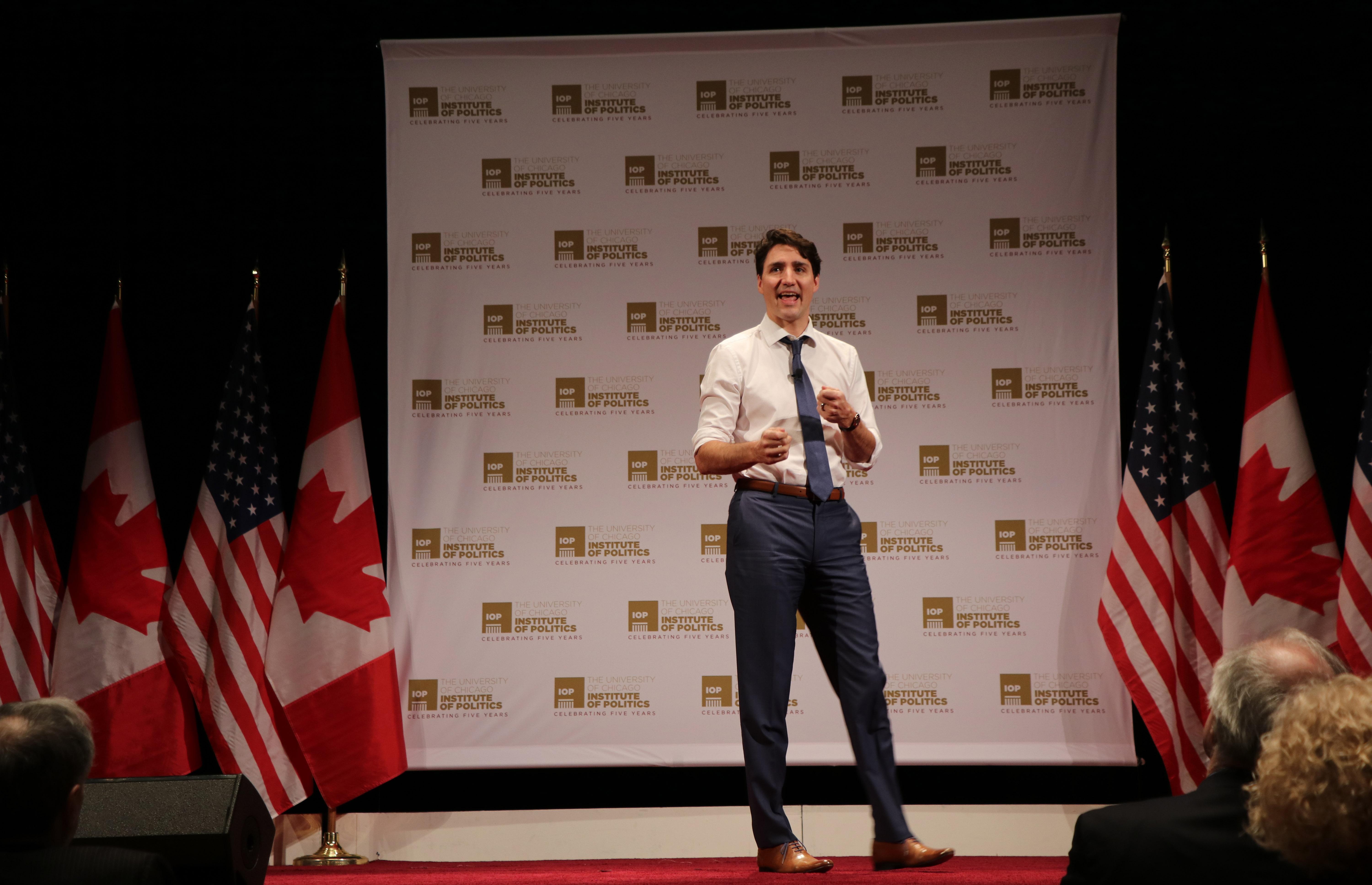 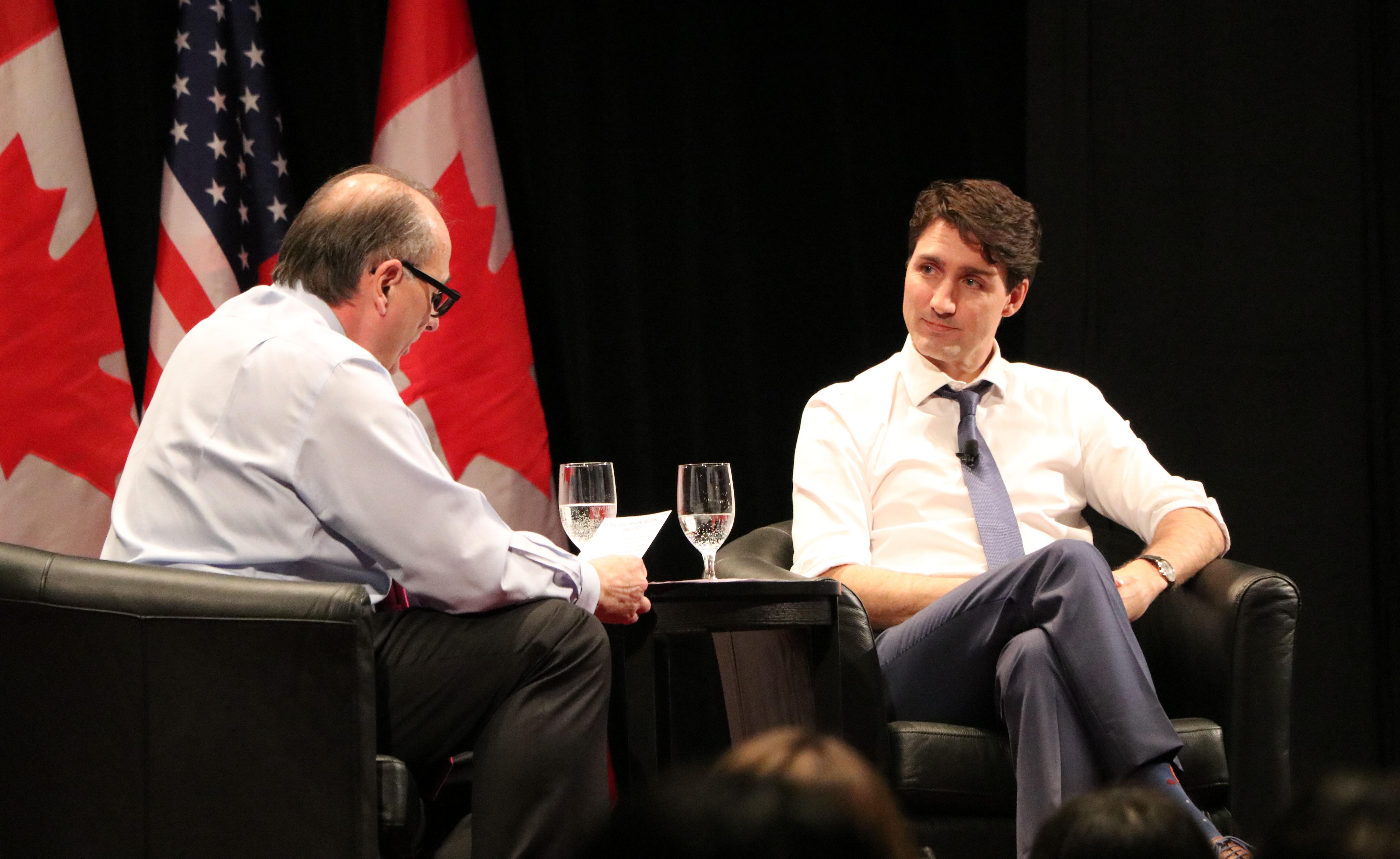 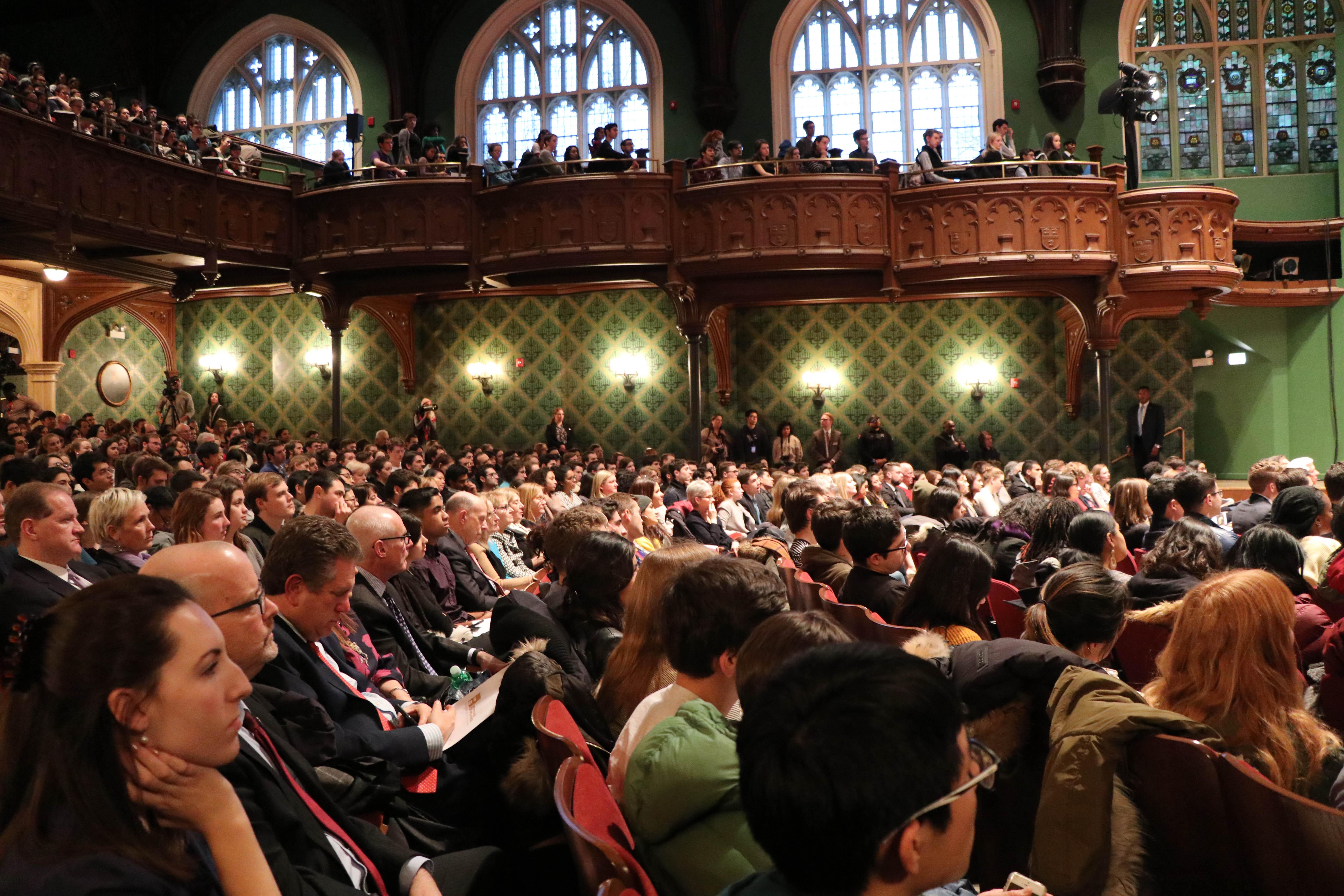 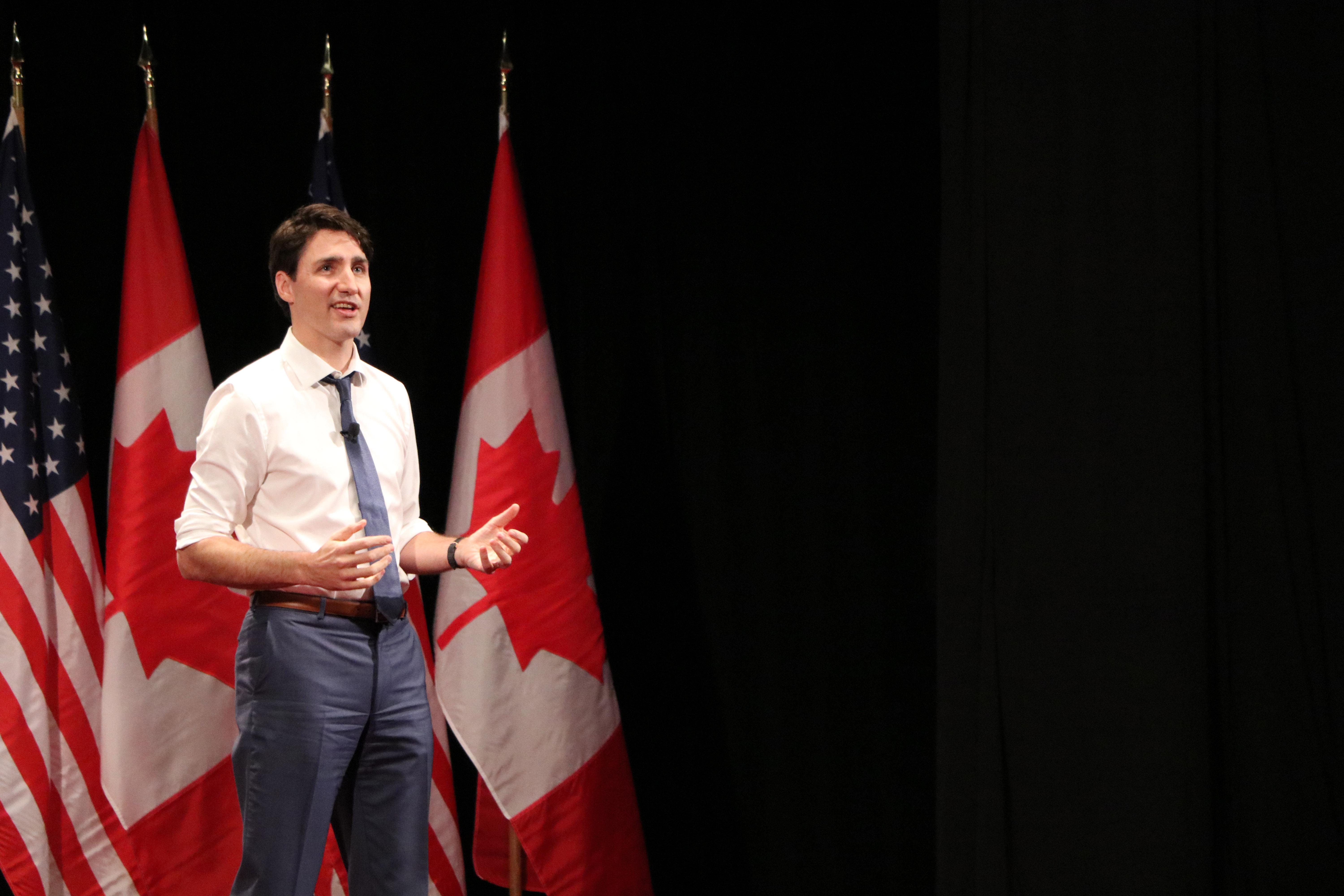 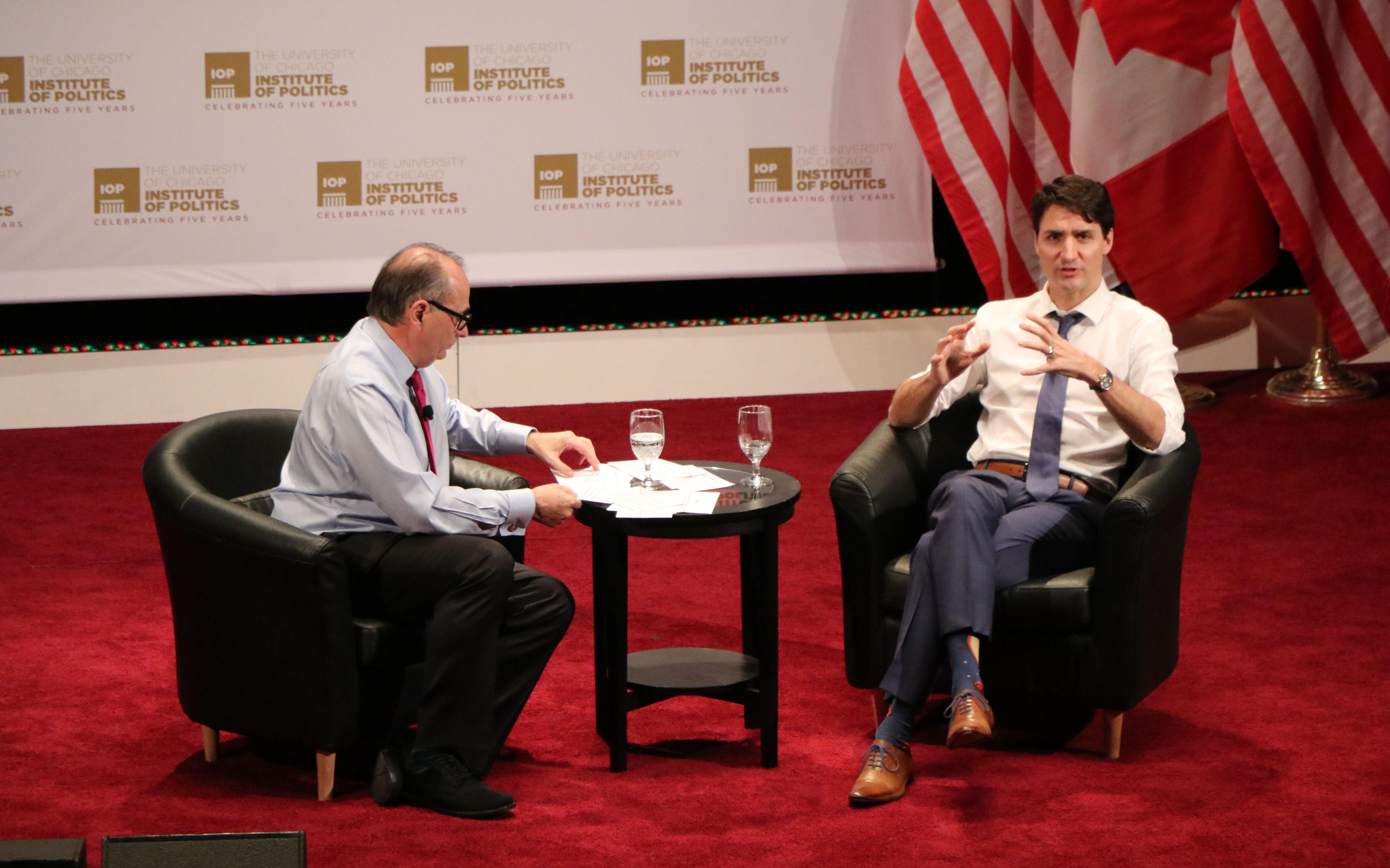 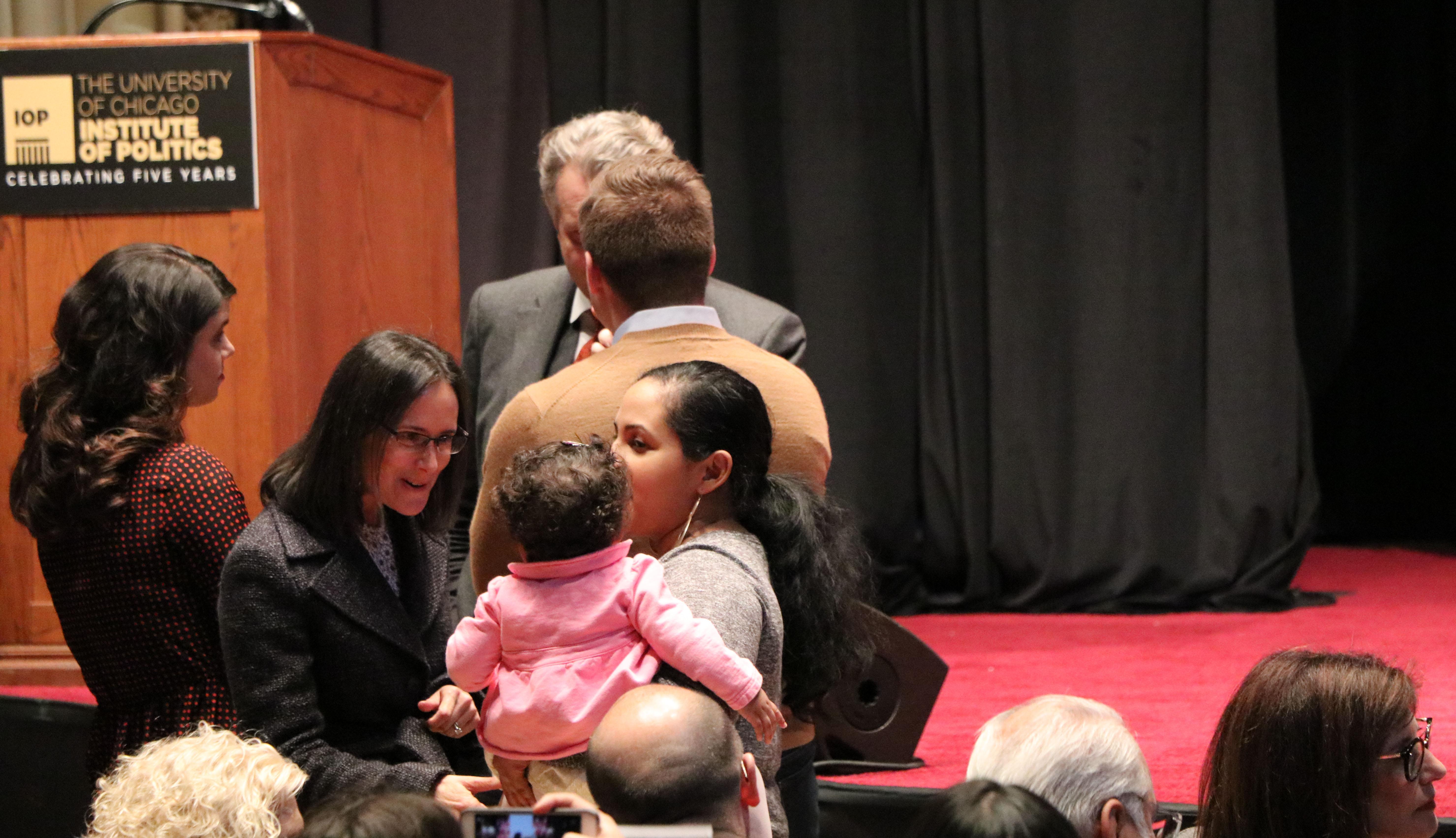 Illinois Attorney General Lisa Madigan, who will not seek reelection this year, speaks to an attendee's young child before the start of Wednesday's event. (Evan Garcia / Chicago Tonight) 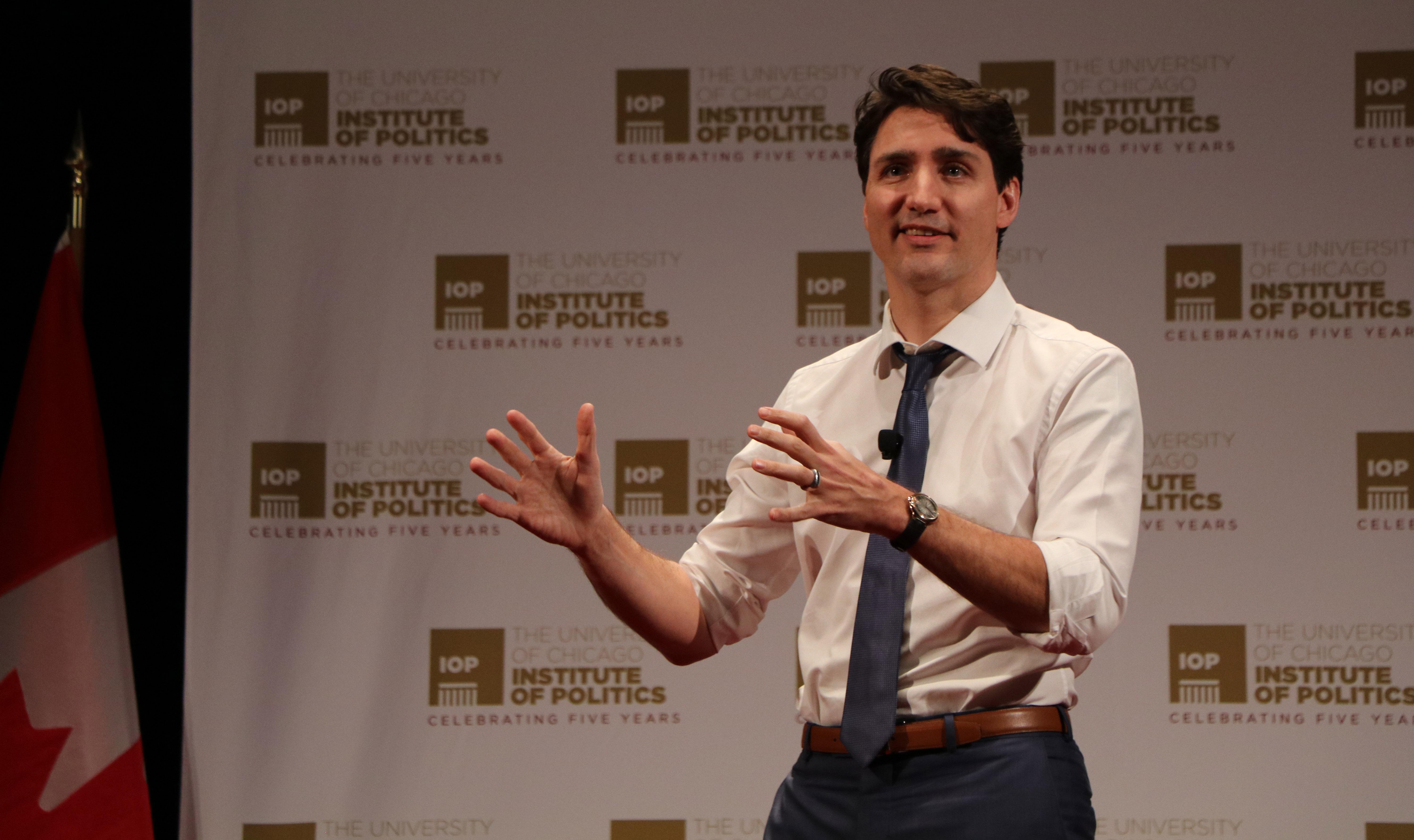 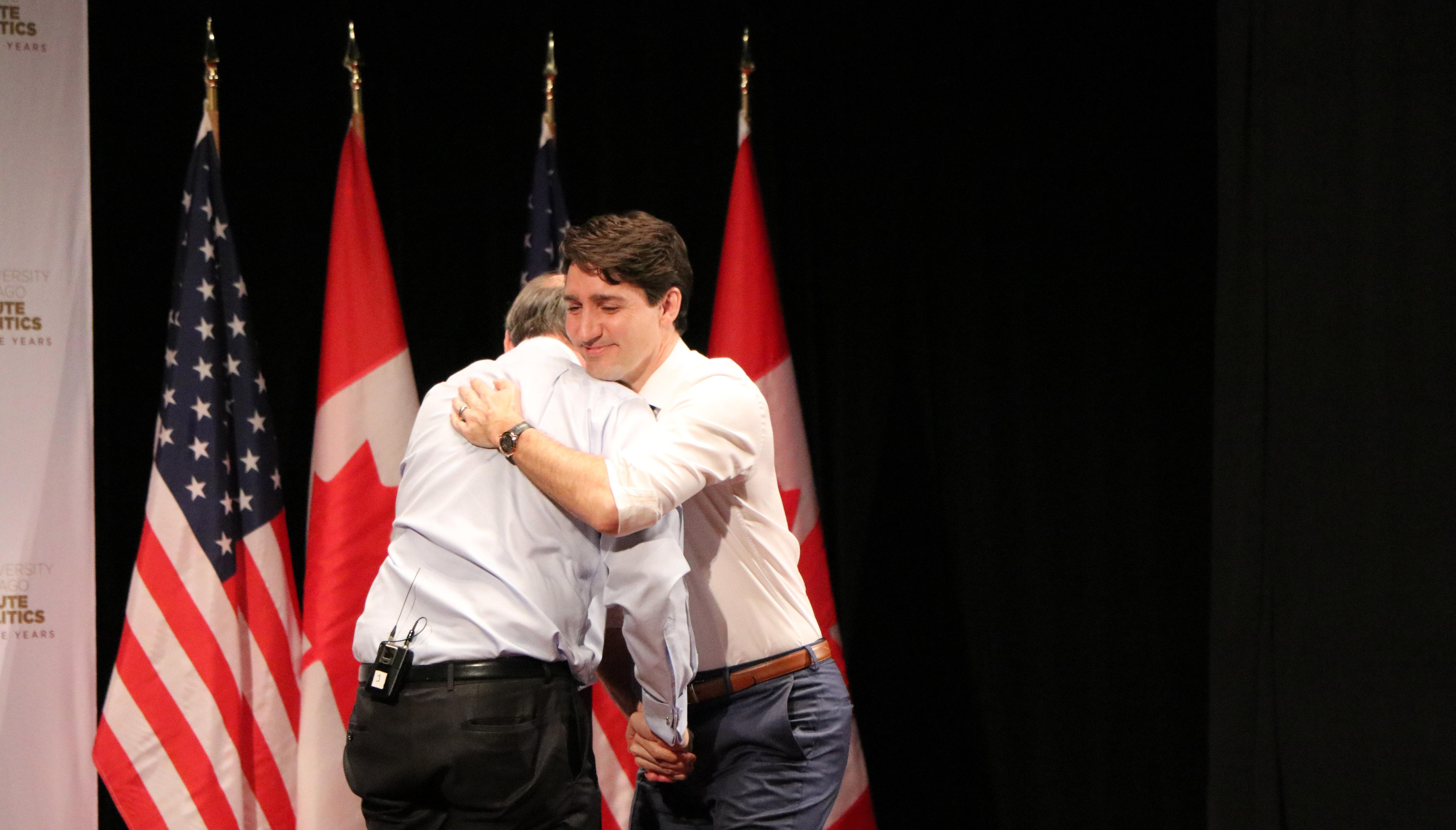 Axelrod and Trudeau hug at the end of the question and answer session. (Evan Garcia / Chicago Tonight) 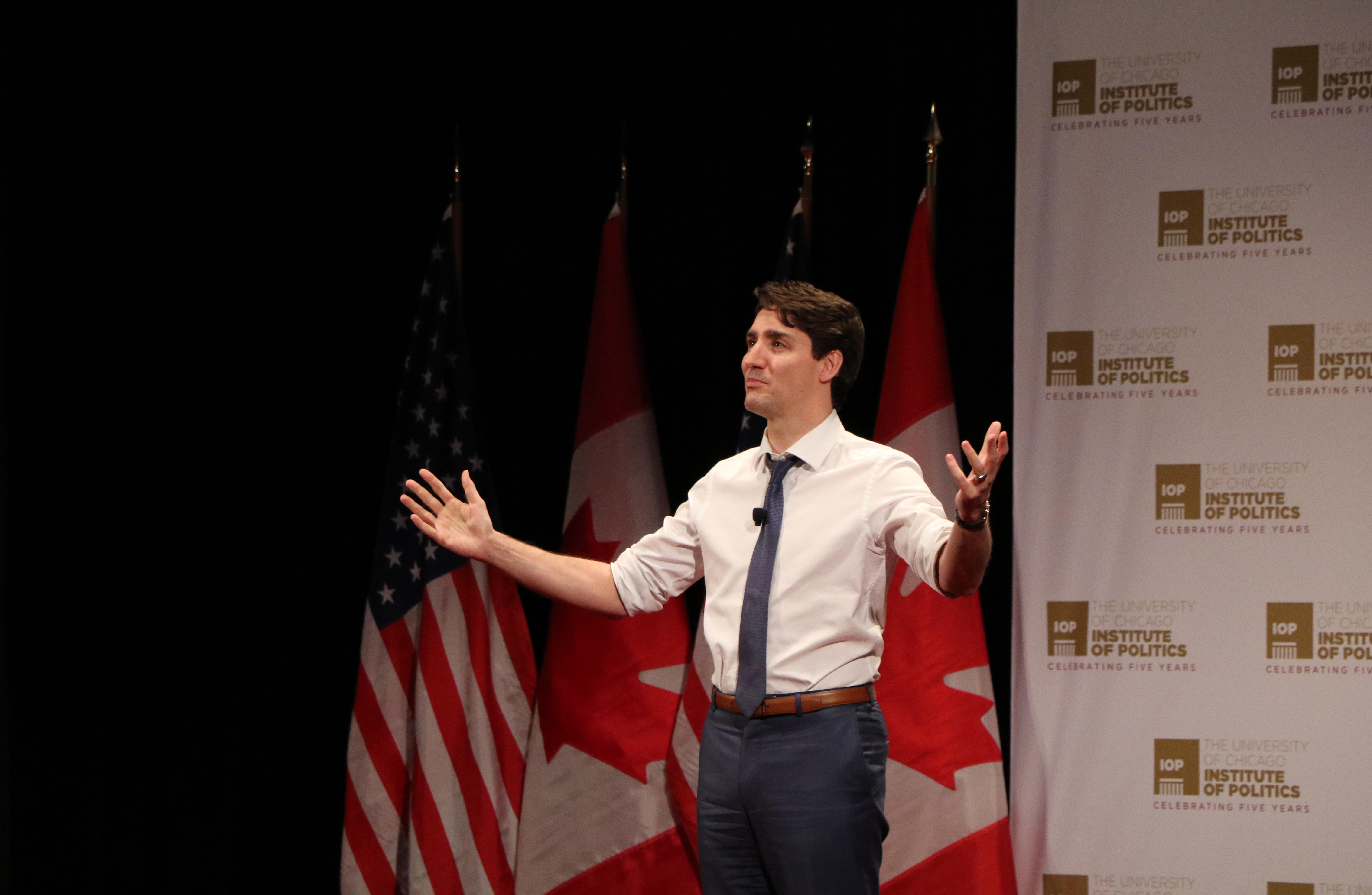 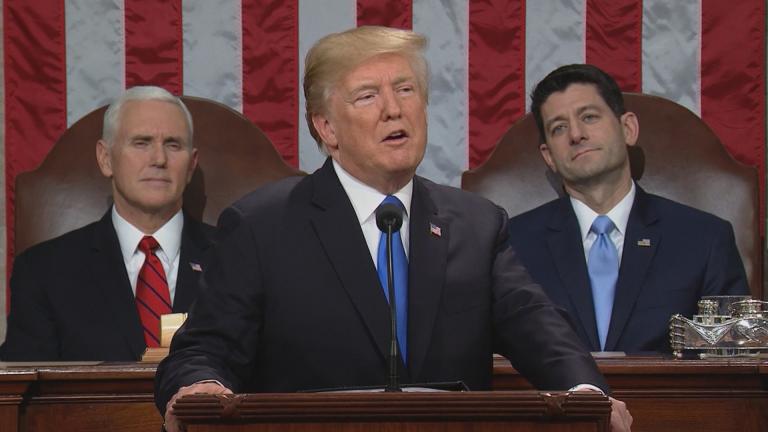 Jan. 31: In his first State of the Union address, President Donald Trump called on Congress to pass his $1.5 trillion plan to “rebuild our crumbling infrastructure.” But how far will that money go? 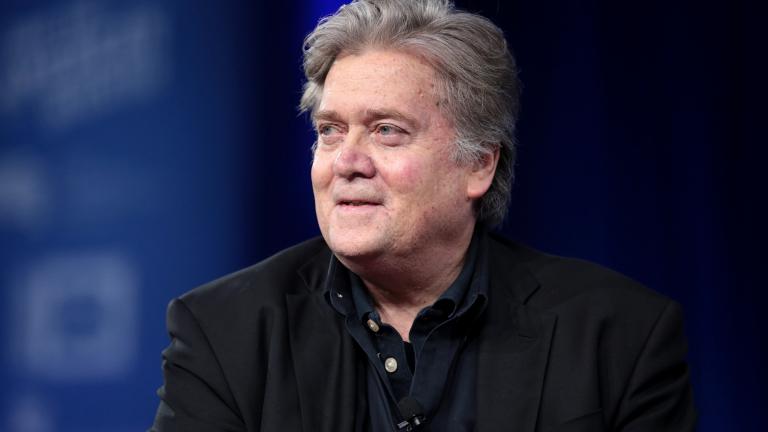 Steve Bannon Accepts Invite to Speak at U of C, Students Protest

Jan. 25: Students at the University of Chicago protested early Thursday in response to news that former White House chief strategist Steve Bannon had accepted an invitation to speak at the school. 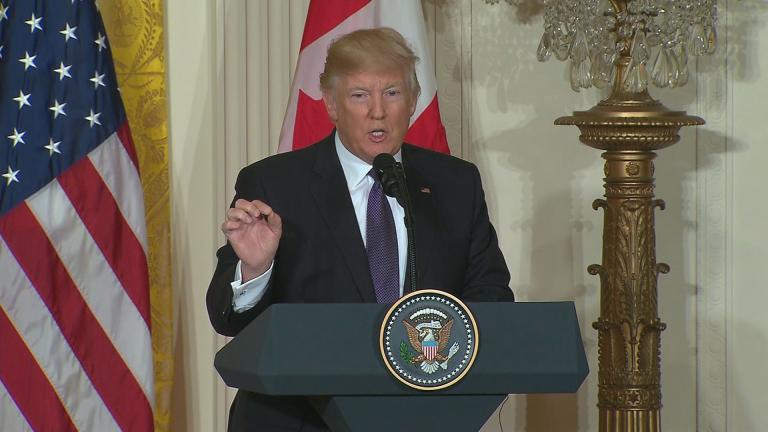 Jan. 18: President Donald Trump could begin his second year in office with a government shutdown. An assessment of his first year, and a look ahead. 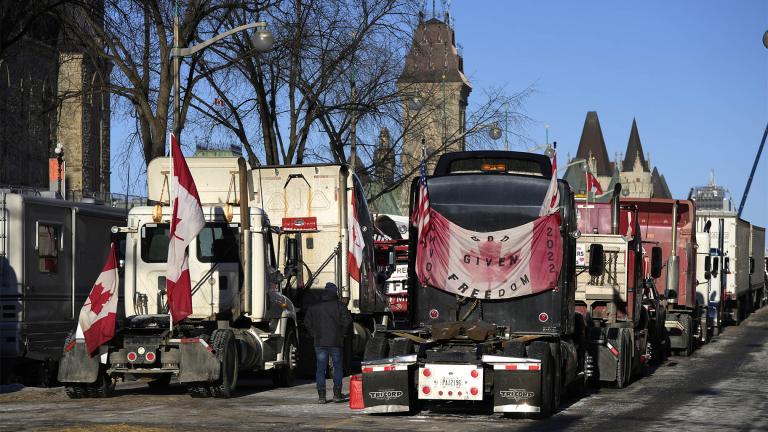