Chicago has been recycling since 1995 when Mayor Richard M. Daley introduced the blue bag program, which was replaced with blue carts starting in 2005.

That program is now in effect across the city, but Chicago’s recycling rate is among the lowest in the country. The city is now trying to change that.

The state-of-the-art facility, opened in 2016, processes 20 tons of recyclable materials every hour—2.3 million tons a year. Though the technology has gotten more sophisticated, human hands are still needed. 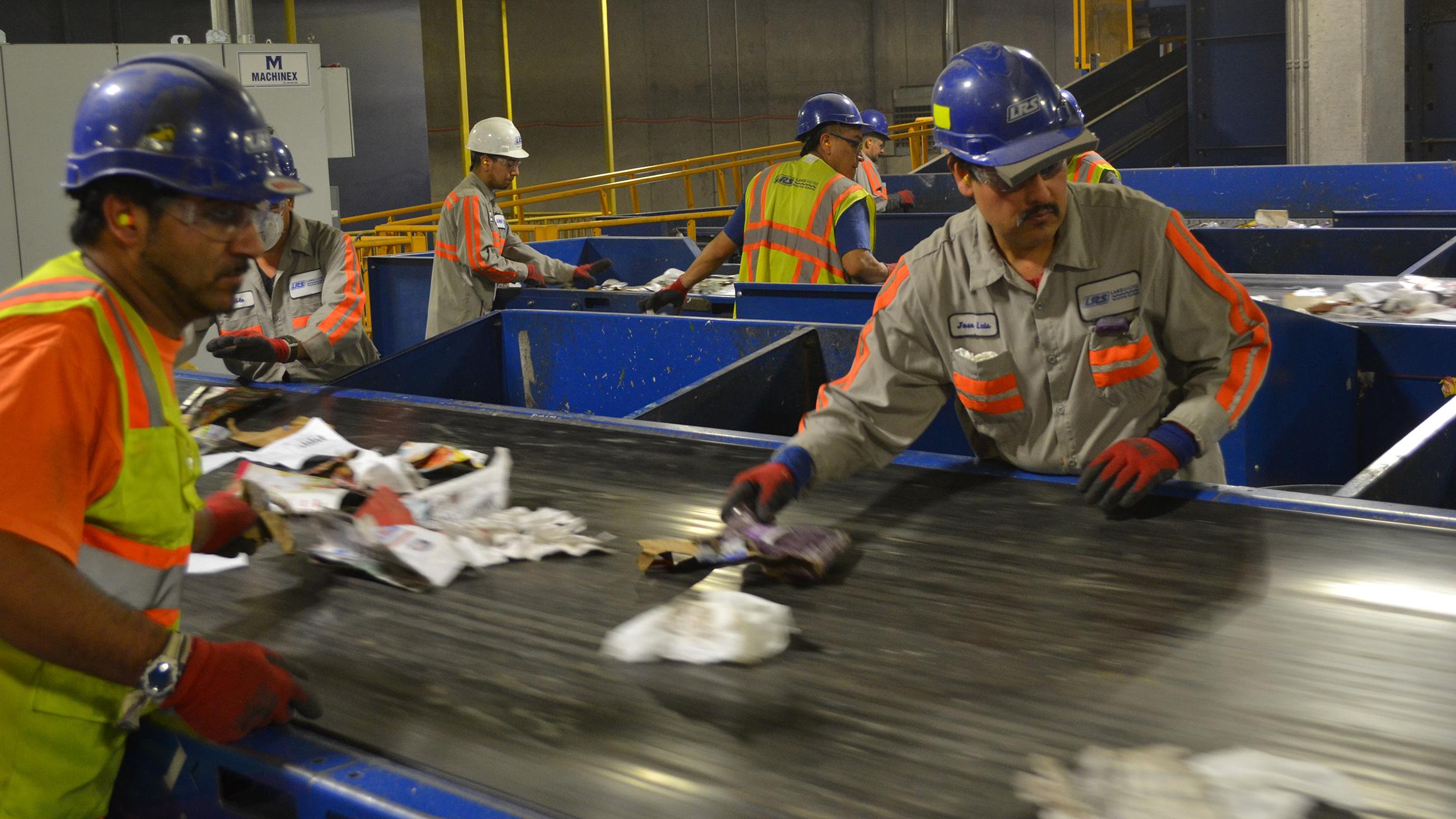 John Schroeder: The equipment is great for some of the sorting, but for the contamination and stuff like that, you’re always going to need a set of eyes and hands to pull that out of the stream.

Brackett: A claw excavator begins the process by dumping small mounds of trash onto the conveyer belt for the first sort. Workers pull out any items that would interfere with the fast-moving machinery. The worst offender: plastic bags.

Schroeder: They get wrapped around the equipment, cause the equipment to stop, which in turn causes a bunch of downtime for the system.

Brackett: A large magnet in this machine separates out the tin and steel, some of the most valuable recycled products. A computerized optical scanning program generates a puff of air to separate plastics. Once the materials are sorted, a baler crushes the products into dense cubes ready for sale. 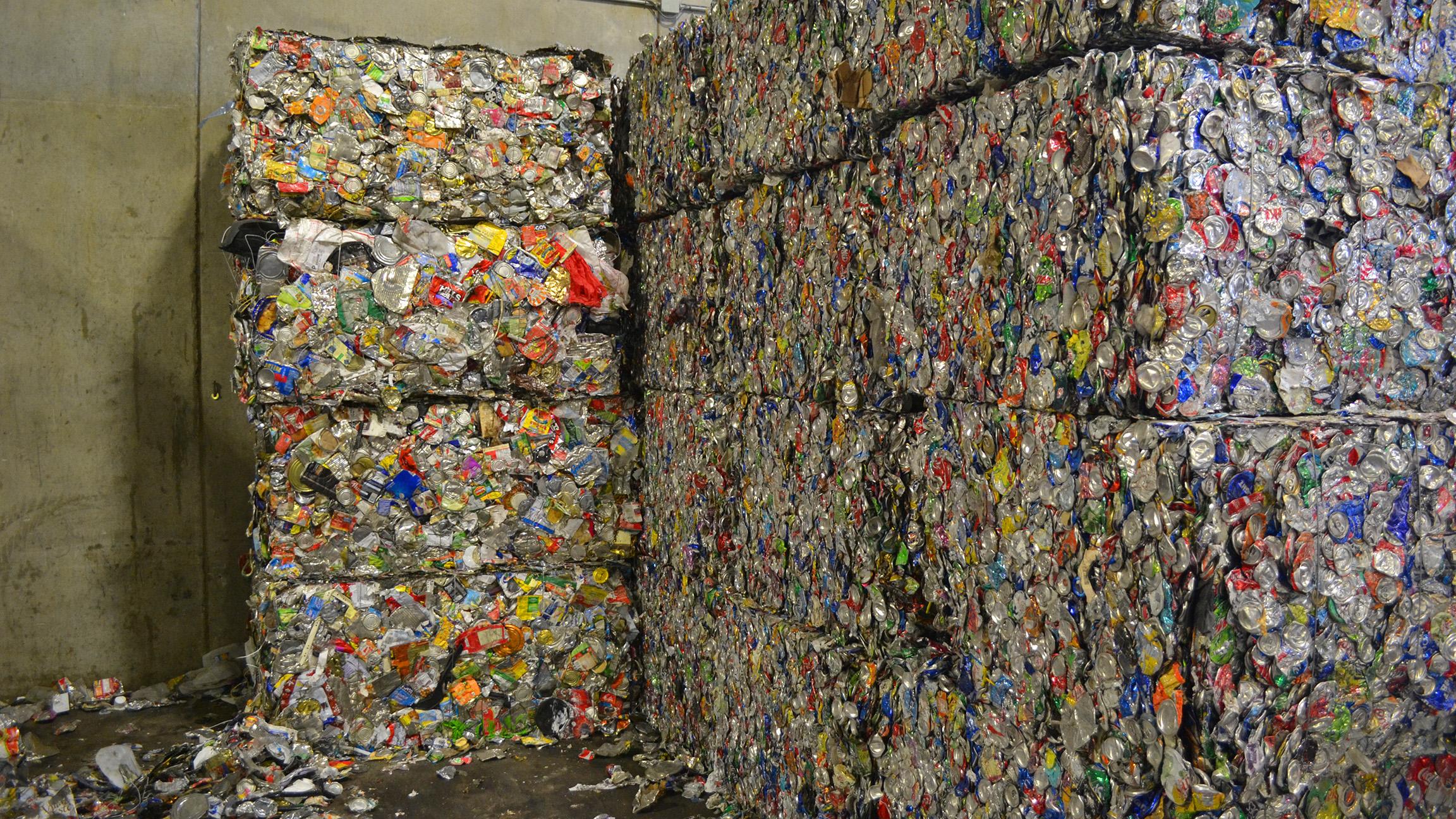 Chicago pays two private companies, Waste Management and Sims, $12 million a year for recycling 60 percent of the city’s blue can waste. The city picks up the other 40 percent and gets a percentage from the sale of the recycled products. Though Streets and Sanitation Commissioner Charles Williams admits that today’s low prices for recycled materials makes recycling less profitable.

Williams: Right now, we’re struggling with recycling in our city, but so are other cities throughout the country. You have to be in this one for the long term. It’s not something you get in and get out. It’s like any other business: You are going to have your ebbs and your flows. But you have to stay in it for the long term because it’s better for the environment, it’s better for our planet.

That’s because even residents who want to recycle aren’t sure what should go in those cans.

Brackett: Alderman Scott Waguespack says his ward office has sent out information on what should and shouldn’t go into the blue cans. But a quick tour of the blue cans in an alley in his ward shows the problem.

So, even when people try, they’ve got it in the blue can …

Waguespack: They got it in here. It looks like they broke down their other stuff. But they put it in plastic bags, and that’s a no-no. So they could come up technically and put an orange sticker on it and all of the good stuff in there – 99 percent of it is good recyclable material – would go to the landfill.

Brackett: To combat the low recycling rates, the city is launching a major educational campaign in July. These are some of the images that will appear on digital billboards, city informational panels, CTA trains and buses. And that’s not all.

Christopher Sauve, Streets and Sanitation Deputy Commissioner: This is a postcard that’s going to be going out at the end of the month to all 600,000 households we service. It just talks about the basics of the material that we do accept, a few items on here too that we don’t accept. Kind of the heavy hitters when it comes to contamination. 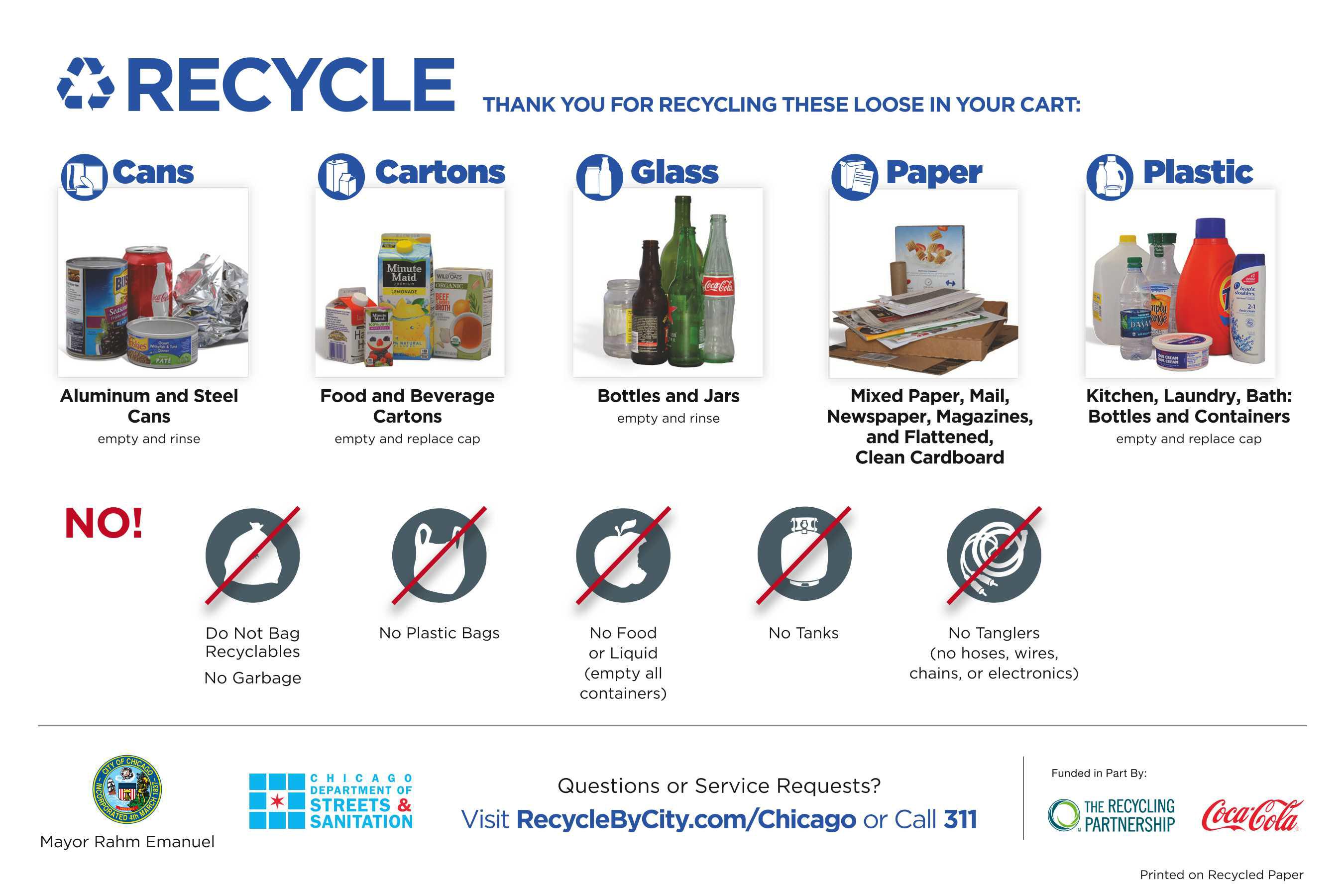 (Courtesy Department of Streets and Sanitation)

(Learn more about what can and can’t be recycled in Chicago by checking out blue cart documentation here and a more detailed guide here.)

Brackett: Now, if non-acceptable items are tossed in the blue can, orange stickers are slapped on the cans. But that will change with the new program. 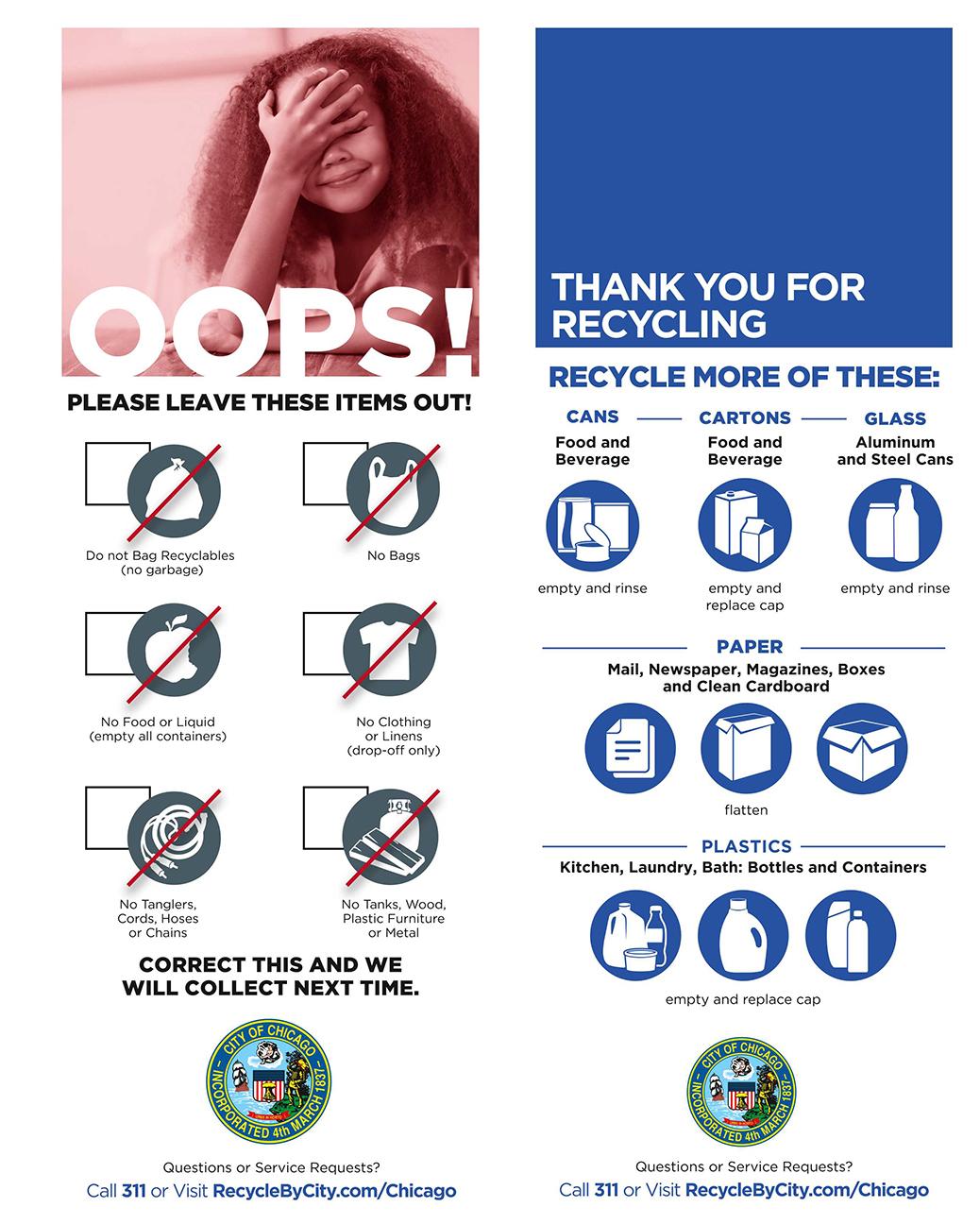 (Courtesy Department of Streets and Sanitation) Sauve: So this is on carts that people—if they’re not participating correctly—they would receive a tag like this. And again, it’s not as punitive as tags we’ve used in the past that have more of a black and orange feel to it, almost like a parking ticket. This one is just going to be much more education-focused, on items we don’t accept.

Brackett: Carter O’Brien is the sustainability manager for the Chicago Field Museum, as well as vice president of the Chicago Recycling Coalition. He applauds the city’s new education efforts but says it just touches on half the problem.

O’Brien: There’s not I think a really holistic approach to recycling. We have a Department of Streets and Sanitation, which is charged with only the one- to four-unit buildings, and then it’s really up to the private haulers and private buildings to do their part for five-plus units. So that means skyscrapers, commercial buildings, institutional buildings.

Brackett: Forty-five percent of Chicago’s housing stock is condominiums or five-unit or more rental properties, and all those units use private garbage and recycling services, which the city doesn’t track.

But O’Brien says a new recycling ordinance passed last year that requires all buildings to have a recycling plan, and imposes hefty fines if they don’t, has begun to make a difference.

O’Brien: Based on the original wave of data that we got from DSS, it looks like we’re adding lots of buildings to recycling program rolls, and that’s all we can ask for at this point.

Brackett: Unlike the city, which offers no composting services for food, the Field Museum separates food waste for composting.

O’Brien: We are only sending to a landfill one-third of what we did five years ago. That’s something I’m the most proud of here. It’s nice to say that we compost and it’s great to do what we can for recycling, but at the end of the day, I don’t want to send things to the dump.

Brackett: Last year, the city spent $36 million to send its garbage to landfills. It hopes its new program to encourage recycling will cut down on that cost—and improve the environment.

One of the reasons the city recycling rate is so low is the high contamination rate. Eighteen to 30 percent of the recyclables that are picked up wind up in a landfill because they are mixed with non-recyclable items. The city hopes its new program will dramatically reduce that contamination rate. 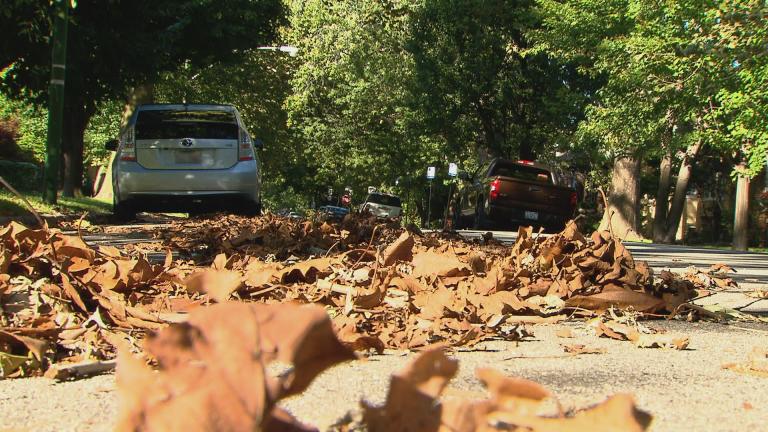 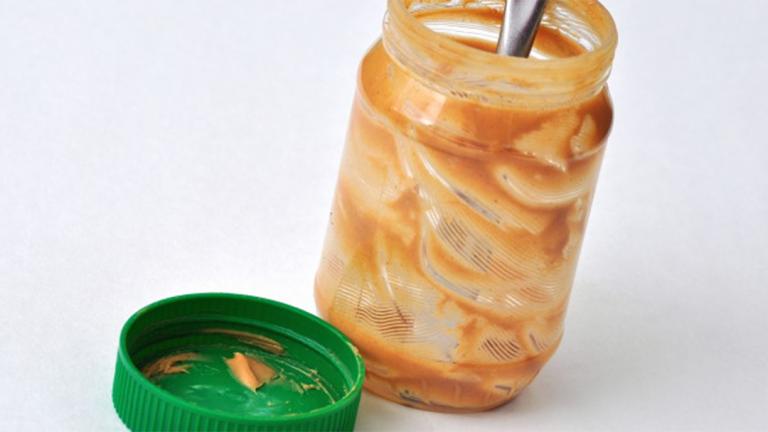