Two years ago today – Jan. 12, 2015 – the ultra-wealthy chairman of a Chicago-based private equity firm took on a new venture when he was sworn in as Illinois’ 42nd Governor, following a campaign in which he pledged to “shake up Springfield.”

“We are in the midst of a government financial crisis that has been building for decades,” Gov. Bruce Rauner said in a speech just after taking the oath of office. “Some in government will be tempted to once again take the easy road and leave the real problems for another day and the next generation.

“But, we cannot do that because to do so, to conduct business as usual, would be morally corrupt. Instead, we have an opportunity to accomplish something historic: to fix years of busted budgets and broken government; to forge a path toward long-term prosperity and a brighter future; to make Illinois the kind of state others aspire to become, a national leader in job growth and education quality.”

Illinois was without a complete budget at the time; Rauner’s predecessor, Gov. Pat Quinn and Democrats of the outgoing General Assembly left him with a $4.8 billion budget hole to fill.

At the start of 2015, weeks prior to Rauner’s inauguration, a 2011 income tax hike had rolled back from 5 percent to 3.75 percent. At Rauner’s recommendation and encouragement, legislators let the revenue slip away.

At the time, one indicator of the state’s fiscal health – the dollar figure of bills awaiting payment that can’t be paid because there isn’t enough money in the bank – was $6.1 billion.

It took a couple of months – until the end of March that first year of the Rauner administration – but he and the legislature’s Democratic leaders forged a deal that relied on cuts and dipping into special funds to bridge the fiscal year 2015 shortfall.

The tax rate remains at 3.75 percent, meaning a balanced budget would need to spend $5 billion less each year (despite mandatory increases in payments to the state’s underfunded pension systems, and despite calls by Rauner himself for increased spending on education).

Today, according to the comptroller’s office, the bill backlog has spiked to $10.7 billion.

And compromises between Rauner and House Speaker Michael Madigan and Senate President John Cullerton have been few and far between.

“It doesn’t seem like two years, it seems like two weeks. It’s really flown by. A lot of hard work. We made some wonderful progress, also had some frustrations with lack of progress on some key items,” Rauner said of his tenure Thursday as he took to Facebook Live for a two-year review.

The social media platform allows users to ask questions, and to share real-time reactions (both in written comments, or more blatant happy/angry face emoji that pop up on screen, like a dot graph) to the streaming video of Rauner in his capitol office.

“Obviously some things, we’re frustrated, we haven’t been able to get the General Assembly to do yet around term limits, fair maps, property tax relief, school funding change. We’ve been working on this for two years, haven’t done it yet. So we’re frustrated. Share your frustration,” Rauner said, reiterating some of the demands he says will improve Illinois’ economy long-term, and therefore prioritized over a budget.

“In the meantime we’ve done amazing things in our administration to improve the government, so it works for you and everybody in the state,” Rauner said.

A legal dispute with the state’s largest public employee union, AFSCME, is ongoing, though a ruling by the state labor board deeming negotiations at an impasse allows Rauner to implement his contract terms. There’s a possibility that will lead AFSMCE members to go on strike for the first time (a phenomenon which would surely be a major factor as Rauner begins the final half of this four-year term).

Thus far, Illinois’ unprecedented lack of budget (and the pain that university students, social services and some Illinois families have felt as a result) is the hallmark of Rauner’s time in office.

Democrats’ refusal to pass Rauner’s agenda, and his unwillingness to retreat from them, is at the heart of the political stalemate that’s left the state in this unprecedented, muted chaos.

The underpinnings of much of Rauner’s platform have an added benefit to his party, in that legislative term limits, removing legislators’ ability to draw district boundaries, curbing union membership and workers’ comp changes that undercut trail lawyers take indirect aim Democrats and their allies.

Backers cheer him on to never surrender; critics decry him as Illinois’ worst-ever CEO.

The governor said during his Facebook event that he’s “heartened” by events this week, namely a monster, bipartisan deal brokered by President Cullerton and Senate Minority Leader Christine Radogno that gives him at least partial victories, and a Senate vote to institute a decade limit on leadership roles.

Rauner also cast as positives a House vote on a property tax freeze and a public call by Speaker Madigan to make Illinois more business friendly, even if the property tax bill is already dead, and even if Madigan on Wednesday again rejected Rauner’s own prescription for the state’s economy.

Another question Rauner’s office selected for him to answer during the Facebook chat came from someone who called his ideas “sensible,” and wondered: “Will you stay the course?”

“The answer is emphatically yes. We’ve got to stay the course. I’m committed to doing this,” Rauner said. “I will never give up.” 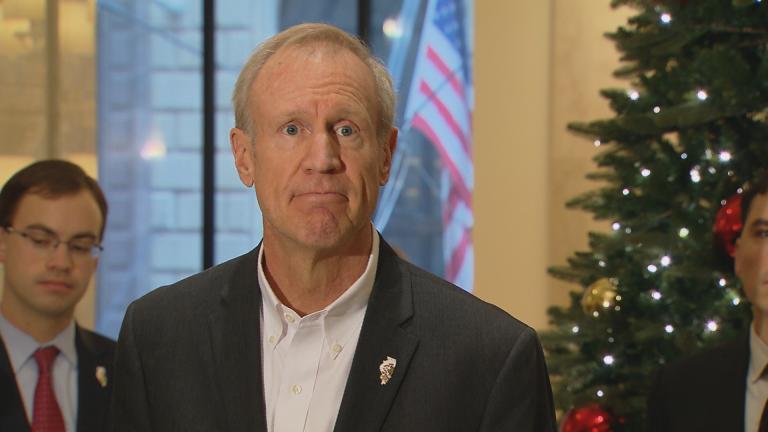